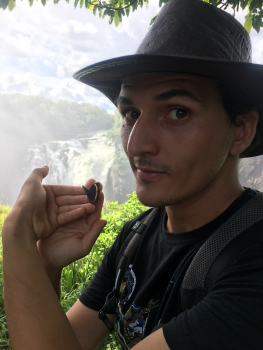 My Postdoc project focus on the dispersal of plume structure of pheromone based lures and how it is detected by various insects. With the help of a mobile electro-antennogram detector (mEAD), I can study in the field the antennal response of forest pests insects at various distance from a lure. This system will be coupled to a 3D sonic anemometer that will analyse wind direction in space. Together, the plume dispersal of = pheromone based lure on moths (cossid moth, False codling moth, gypsy moth..) and other forest pest will compared. 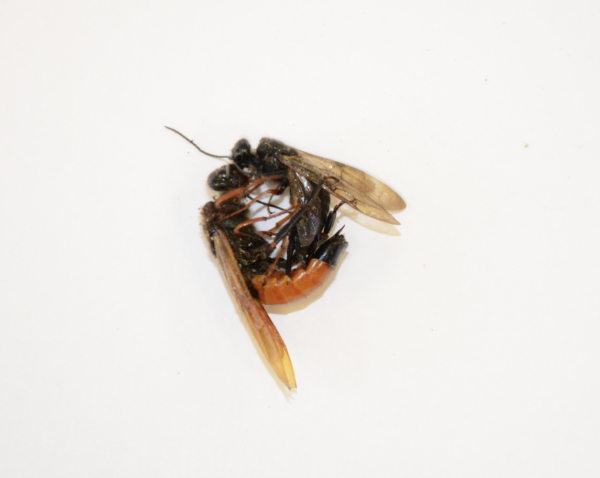 I’ve integrated FABI and TPCP in April 2016 under the supervision of Prof Bernard Slippers and Dr Jeremy Allison. I turn my interest toward the chemical and visual ecology of Sirex noctilio. My purpose is to know more about pheromonal and kairomonal communication and if we can use it to improve the actual trap. Additionally, I try to understand better how and why the wasp see it environment.

Sirex noctilio is a woodwasp native from eurasia (Fig 1). It has been introduced all around the word, where pines plantation are present. The woodwasp quickly become a invasive pest where it has been introduced because it can damaged and killed pine trees. When the woodwasp what to lay eggs, it makes a hole with its ovipositor in the bark of the pine. Then it to introduce eggs, mucus, and a symbiotic fungus needed for the progeny development. Firstly, the resin is popping out the tree when a hole is drilled, making the tree weaker. Secondly, the larvae feed of the wood inside the tree for its development, which affect the health of the tree and the quality of the wood. Finally, the combine effect of the mucus and the fungus dry the tree and can lead to its death. In some cases, hundreds of Sirex can attack one tree, and plantation can have a hight infestation perception (up to 90% in south america). All these factors makes Sirex noctilio one of the worst pine pest for forest industry.

If you want to know more about pine industry and the Sirex problem in South-Africa click here to see a nice article and video made by University of Pretoria!

To find a way to manage this pest, I’m trying to find pheromones (from conspecific individuals) or kairomones (from the symbiotic fungus as Amylostereum areolatum). Thanks to the GC-EAD system we do have in FABI, I'm able to separate volatile compound and screen them one by one through the insect antenna. This technic allow me to record if the insect is sensitive or not to each different molecules. So far, I've confirmed the male pheromone found by Cooperband and his colleagues (2012). I also found potential interesting molecule I'll test soon during behavioural tests. These part of the project aim to create (or improve) chemicals lures used to trap S. noctilio in pine plantation.

I also study the eyes of the wood wasp. I try to determine what color can Sirex see. The absorption of different wavelength (colours) is due to the expression of different proteins called a opsins. Different shaped opsin will absorb different colours. Opsin are well conserved across insects. They group together in 4 category relying to the wavelength they can absorb: long (green, yellow, orange red), medium (blue-green), short (blue) and ultra-short (UV). After I've made a phylogenetic tree of visual opsin in insects, I investigated S. noctilio genome and found 3 visual opsin fitting in these different groups. I confirmed this result with RNA extraction of the opsins in compound eyes and ocelli. I performed behavioural tests to investigate if there is any attractive colour. The final aim of these project is to increase te number of sirex we can trip in the field thanks to coloured trap. Additionally, we are using S. noctilio as a model in evolution of visual opsin in insect (see poster ESSA).

This PhD, due to its diversity, is a combination of different skills as behavioral tests, chemical ecology, bioinformatics, chemistry, mycology, and many more. It additionally involve a lot of different interaction in between academic staff, researcher, industry leadership and forestry worker.

FABI award "Getting the message to the public" 2020

Best PhD Presentation at the Zoology and Entomology AGM 2019 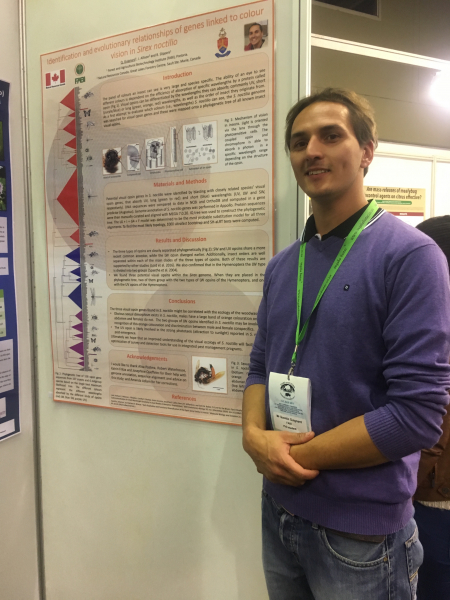 Presentation of a posters: "Identification and evolutionary relationships of genes linked to color vision in Sirex noctilio" (see My link).

Chairperson for the sessions "Nutrients and Toxins" and "Communication".

Presentation of a posters: "Identification and evolutionary relationships of genes linked to color vision in Sirex noctilio" (see My link).

Presentation of a talk: "Have a look into the eyes of Sirex noctilio".

Chairperson for the session 3.

Guest lecturer for the module ZEN 363 (Behavioural ecology) under Prof. Christian Pirk supervision. The lecture is given to 3rd year of zoology and is focus on chemical and visual ecology and how to apply this knowledge to a pest management program.

Demonstrator under Prof. Chris Weldon supervision, for the module ZEN 363 (Physiological processes) give to 3rd years of zoology. 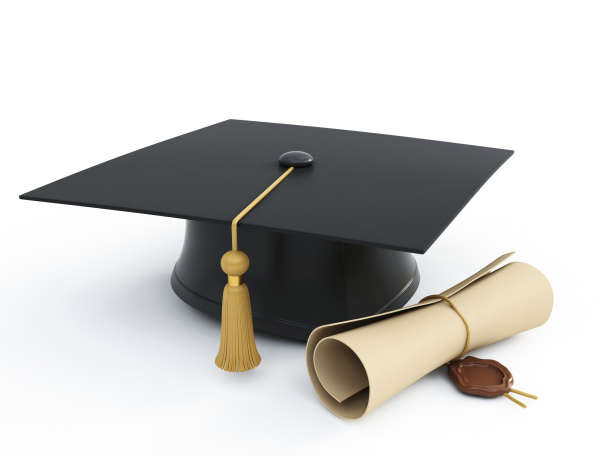 2015-2016: Master in Chemical ecology with distinction at University of Lorient (France). During this master, I had the opportunity to integrate the INRA of Versailles under the supervision of Prof Frerot Brigitte. I was analysing the mix of odors emit by crop fields to protect them against an insect pest.

20012-2014: Master in Biodiversity-Ecology-Environment with distinction at university Joseph Fourier win Grenoble (France). I could accomplish an internship at IRBI institute (Tours, France) on the cuticular hydrocarbon in the Asian hornet. I was able to prove than the developmental stage is the major factor influencing the cuticular profile from young larvae to adult (colony, social status and sex were less important). Two FABIans awarded the best presentation at the Zoology AGM

The University of Pretoria's Department of Zoology and Entomology held its annual general meeting on 28-29 November. 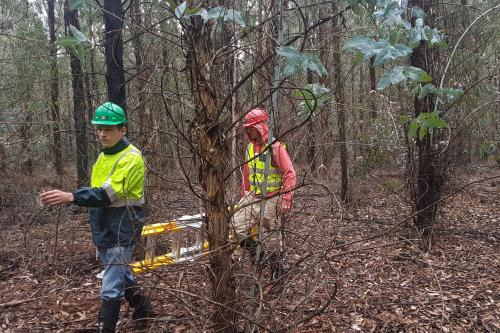 Work at FABI in the area of applied chemical ecology for insect pest management and monitoring continues to grow. 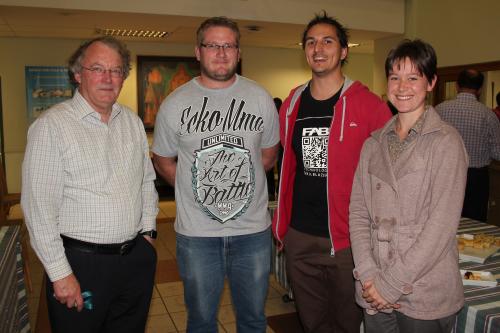 Professor Robin Crewe, a world-renowned expert on bees, presented a special seminar on the behaviour of individual members of a bee colony at FABI on 7 August. PhD candidate Quentin Guignard presented a special seminar on the visual system of the European woodwasp, Sirex noctilio, at FABI on 29 July. Looking into the eyes of the European woodwasp, Sirex noctilio

FABI PhD candidate Quentin Guignard recently returned from a three week visit to the University of Würzburg in Germany where he received training to operate an electroretinogram (ERG). The French Embassy organised a meeting of French academics working in South Africa on 8 February. This meeting aimed to connect French researchers from various fields and promote the expertise and innovation between the two countries.

The excitement was palpable as FABI Director Professor Bernard Slippers welcomed staff and students to their first gathering in the Institute for 2019. During the last week of November, a team of scientists from FABI under the leadership of Prof. Wilhelm de Beer hosted the first workshop in Africa specifically focused on the invasion of the Polyphagous Shot Hole Borer (PSHB). The winter cold was but a distant memory when the FABI Social Club hosted an ice cream party in celebration of the Institute’s annual Spring Tea on 5 September. 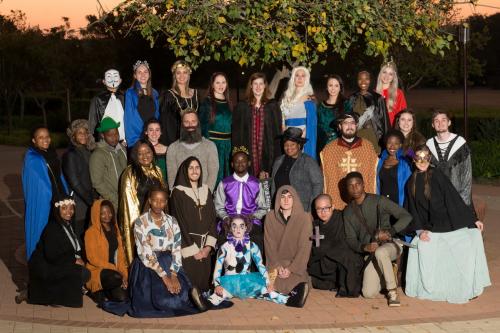 For the third year running, PhD student Quentin Guignard walked away with the Best Dressed Male award at the 2018 annual meeting of the Society for the Presentation of Outrageous Findings (SPOOF). For many decades, researchers depended on collections of reprints of scientific papers to maintain easy access to the literature. It was common practice for researchers to purchase reprints of their papers and to share these with colleagues globally. 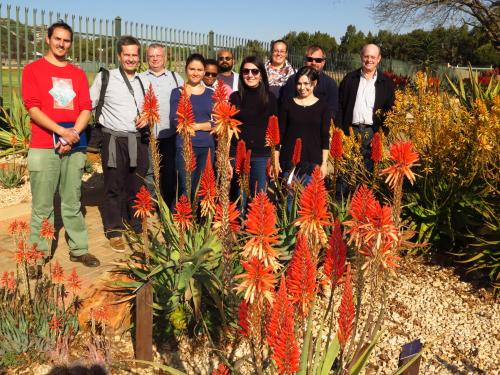 FABIans take in spectacle of aloes in full bloom

A group of FABIans enjoyed a colourful spectacle of red, orange and yellow flowers in full bloom at the LC de Villiers campus of the University of Pretoria (UP). Meeting to develop a national forestry Protection Program for Colombia

FABI’s Professor Mike Wingfield attended a meeting to provide advise on options to develop a National Forest Protection Programme for Colombia during a recent visit to the country.

Tree health experts shared the stage with researchers and forestry industry stakeholders at the 29th annual meeting of the Tree Protection Co-operative (TPCP) Programme at the University of Pretoria on 15 and 16 May. 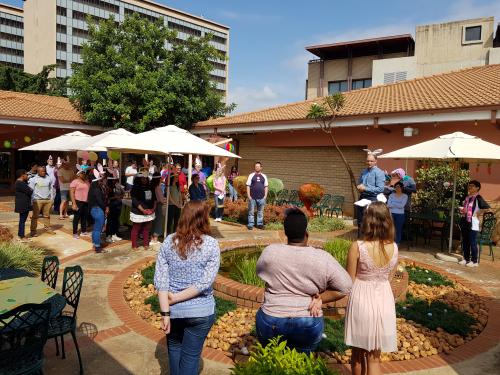 Following the Easter weekend break, the Easter Bunny hopped into FABI on 4 April, leaving behind a trail of Easter eggs and some “rabbit food” for FABIans to nibble on and enjoy. FABI celebrated two decades of research excellence with a science symposium held on 24-25 January in the Aula Theatre on the Hatfield Campus of the University of Pretoria. More than 300 FABI alumni, academics, Government and forestry industry representatives, as well as many current FABI researchers, staff and students, attended the two-day celebration, themed “The Road to Research Excellence”. The 2017 FABI year-end gala dinner and awards ceremony marked 20 years since the founding of the Institute and an historic turning point in its future. FABIans welcome spring in a kaleidoscope of colour!

FABI held its annual Spring Tea in the FABI Courtyard on 1 September. FABI was honoured to receive a visit on 28 July by a delegation from the Pretoria Embassy of the People’s Republic of China, led by Counselor Huang Wei. They were shown the research work being undertaken at the FABI Biocontrol Centre at the University of Pretoria’s experimental farm. The Institute has had a long association with China through the CERC-FABI Tree Protection Programme (CFTPP), a cooperative venture between the China Eucalypt Research Centre (CERC) of the Chinese Academy of Forestry in China, and FABI. The CFTPP arose from a long-term collaboration between the two institutions that was formally established in 2014. Lots of wild and outrageous science at SPOOF 2017!

On 7 July, the University of Pretoria’s Rautenbach Hall was transformed into “Piney Town”, a small town in the Wild West, for the 21st Annual Meeting of the Society for the Presentation of Outrageous Findings (SPOOF). Scientists presented their findings of varying degrees of outrageousness at this year’s SPOOF meeting. In the "eyes" of the audience, two presentations stood out as most exceptional. The Best Dressed Female award went to Josephine Queffelec who came dressed as a Native American totem pole. For the second year running, Quentin Guignard took home the Best Dressed Male award for his costume as one of the villainous Sirex Brothers terrorising the trees of Piney Town.