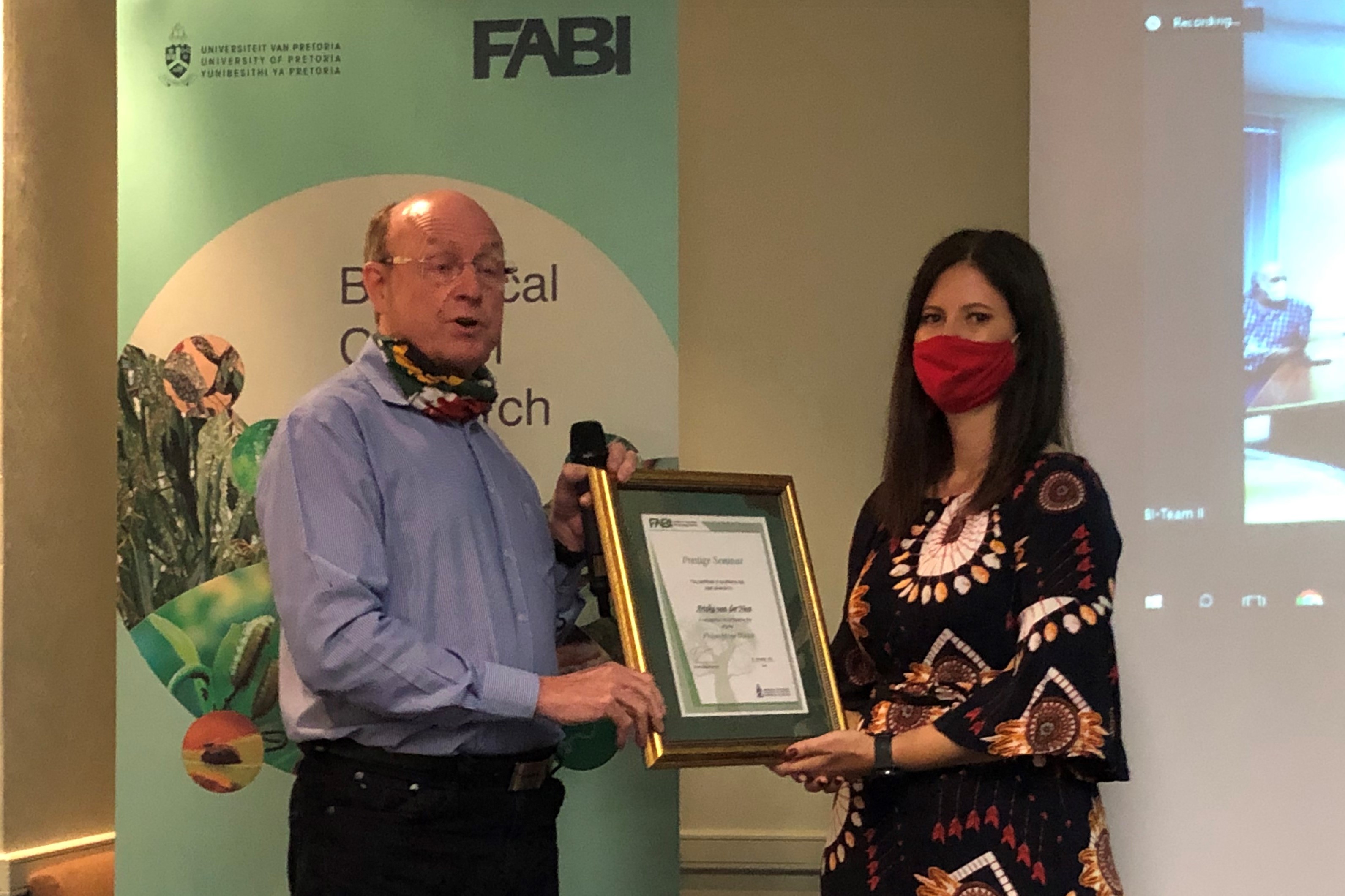 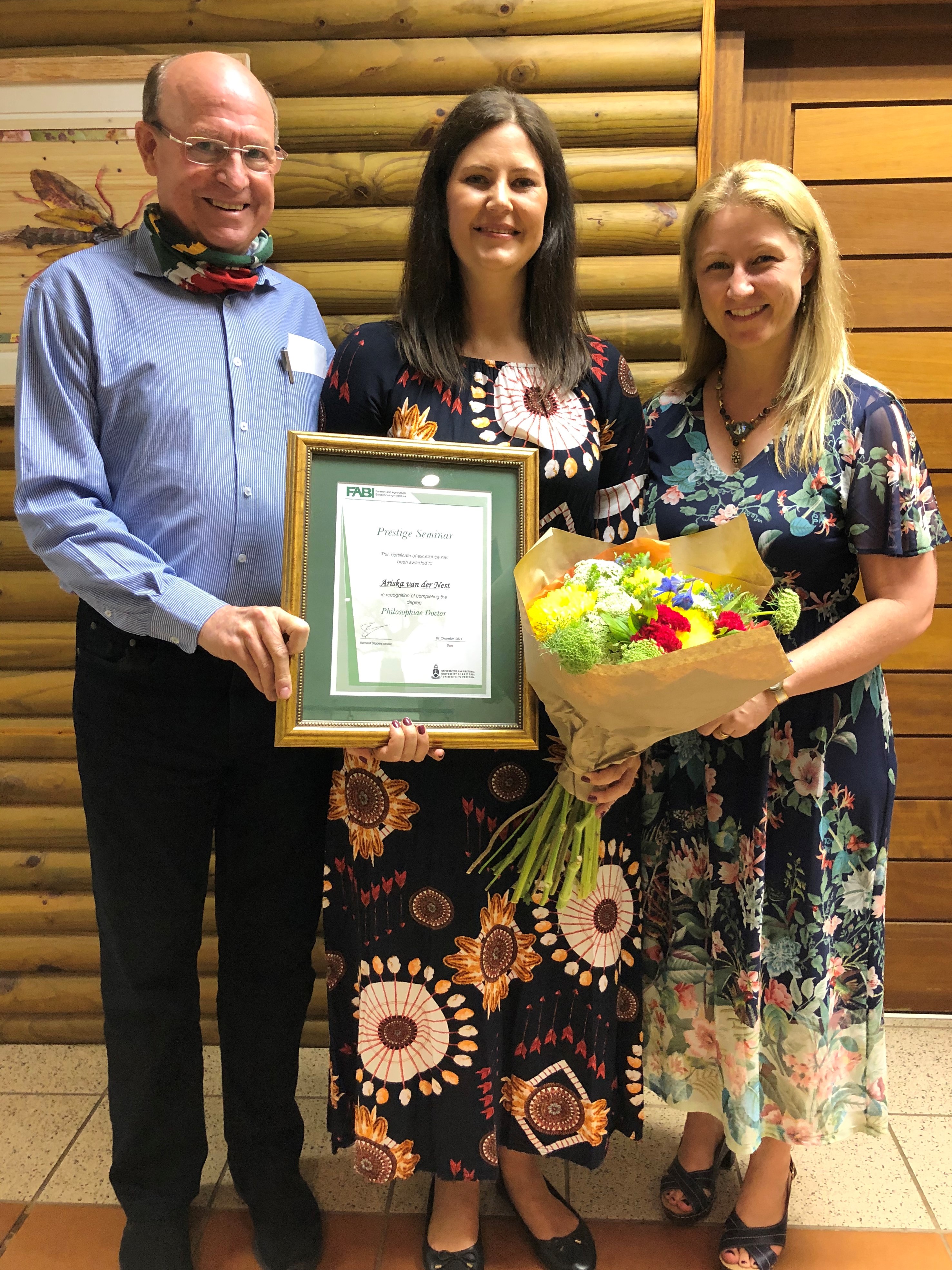 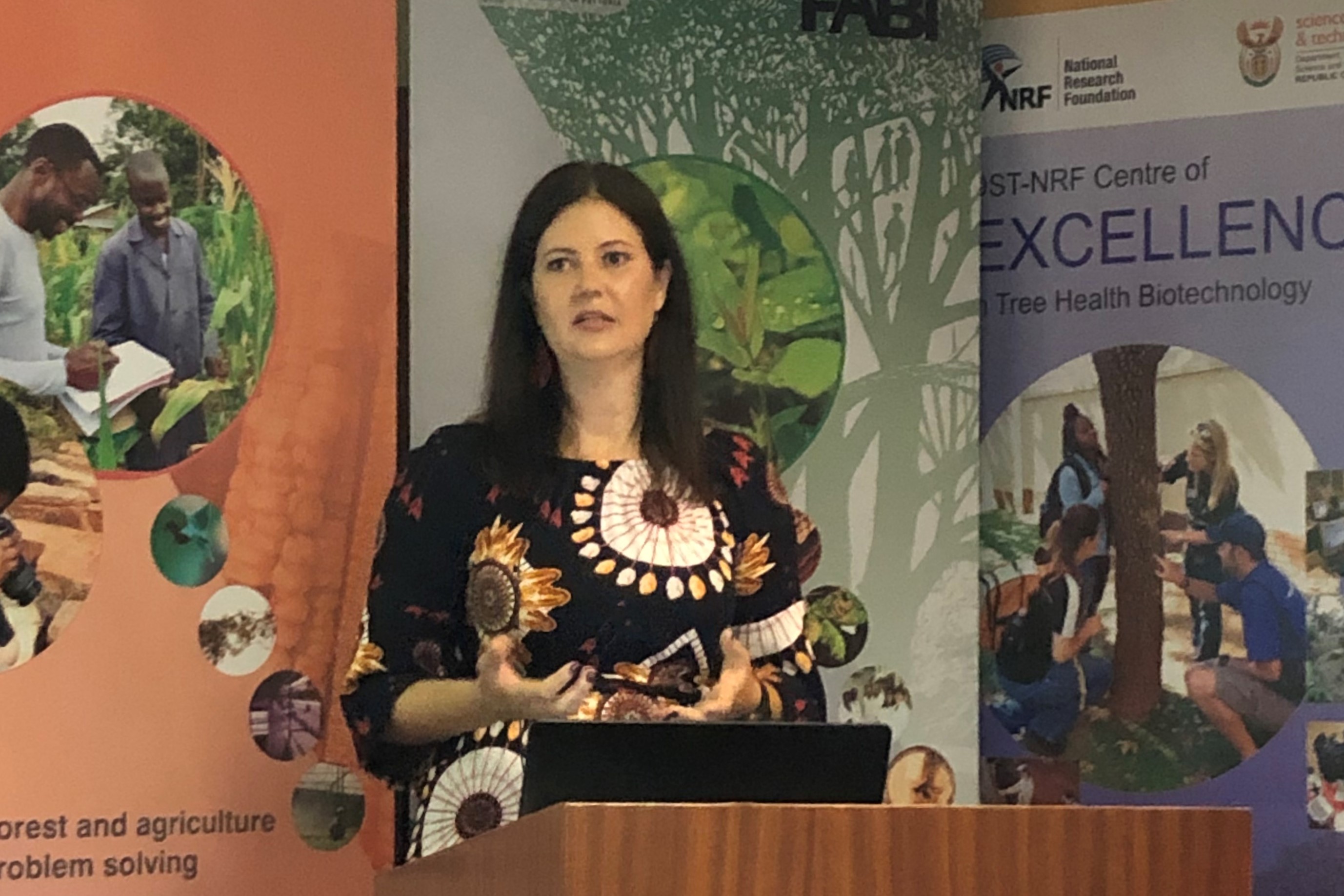 Congratulations to Ariska van der Nest on becoming the tenth FABIan to complete their PhD in 2021. She presented her Prestige Seminar “Species diversity of Lecanosticta and population genetics of Dothistroma species: Important needle pathogens of Pinus” on 2 December. Her audience included a large gathering of colleagues, friends and family, some in-person, but also a global audience with online guests signing in from at least eight countries including the USA, Austria, Slovenia, Slovak Republic, Spain, Colombia, New Zealand and Indonesia.

Introducing Ariska, Prof. Irene Barnes, the primary supervisor for her PhD, lauded her scientific excellence and described her as a great “all-rounded” ambassador of FABI who was a pleasure to have as a student due to her enthusiastic way of looking at life and science and who always got involved in the FABI community. Ariska has already published two first author papers from her PhD thesis, and is co-author on five more. Her external examiners for her thesis were Prof. Michelle Cleary (Swedish University of Agricultural Sciences), Prof. Isabel Munck (US Forest Service, USA) and Prof. Thomas Cech (Bundesforschungszentrum für Wald – Austrian Research Centre for Forests). Her co-supervisor for her PhD project was Prof. Mike Wingfield.

Ariska identified six species of Lecanosticta, of which four are novel taxa, from a large collection of Lecanosticta isolates from infected pine needles from Guatemala, Honduras and Nicaragua based on sequence comparisons of five gene regions. The well-known pathogen, L. acicola was not present in any of the samples investigated in her studies, indicating that this might be a Northern Hemisphere pathogen. It was concluded that due to the high species diversity of Lecanosticta in Mesoamerica, that this region is considered a centre of diversity for the genus.

She also investigated the population diversity, structure and mode of reproduction and likely means of spread for a large collection of D. pini obtained from 12 countries in Europe over a 12-year period. The observed population structure as well as several shared multilocus haplotypes between non-bordering countries provides evidence that the occurrence and spread of D. pini on the continent has been strongly influenced by human mediated activities in Europe.

The final part of Ariska’s study was to address the unprecedented DNB outbreaks observed in Cantabria in Spain, in 2015, by determining the causal agent, and to determine the population structure, genetic diversity and mode of reproduction of the pathogen involved, from three infected sites of planted Pinus nigra subspecies. Dothistroma septosporum was confirmed as the causal agent and the high genetic diversity observed in isolates obtained from Cantabria suggested that the pathogen was not recently introduced into the region.

The findings of this thesis emphasize the importance of quarantine and the need for caution when pine germ plasm and other pine material is moved between continents, countries and different regions. The newly described Lecanosticta species from Central America are of unknown importance but could pose a threat to Pinus species if introduced into new environments in the future, especially considering that Mesoamerican pines are being used for plantation development in the Southern Hemisphere. Furthermore, through the first large scale population study of Dothistroma pini, it was shown that while this pathogen is not new to the European continent, human activities have contributed to the spread of this pathogen.