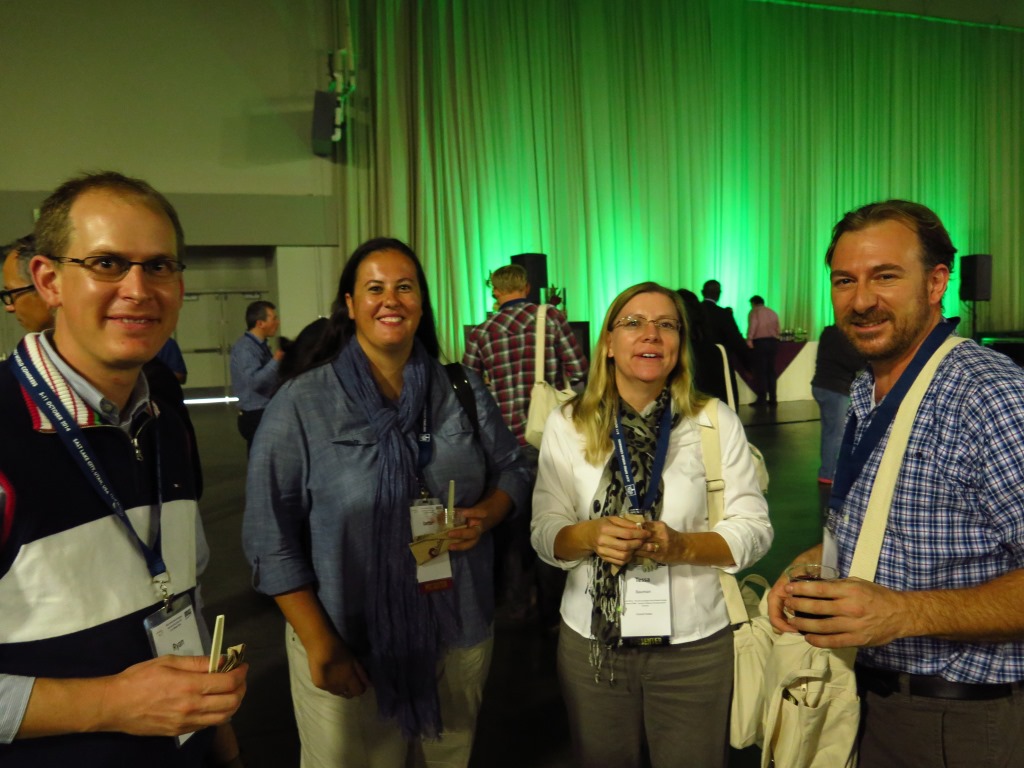 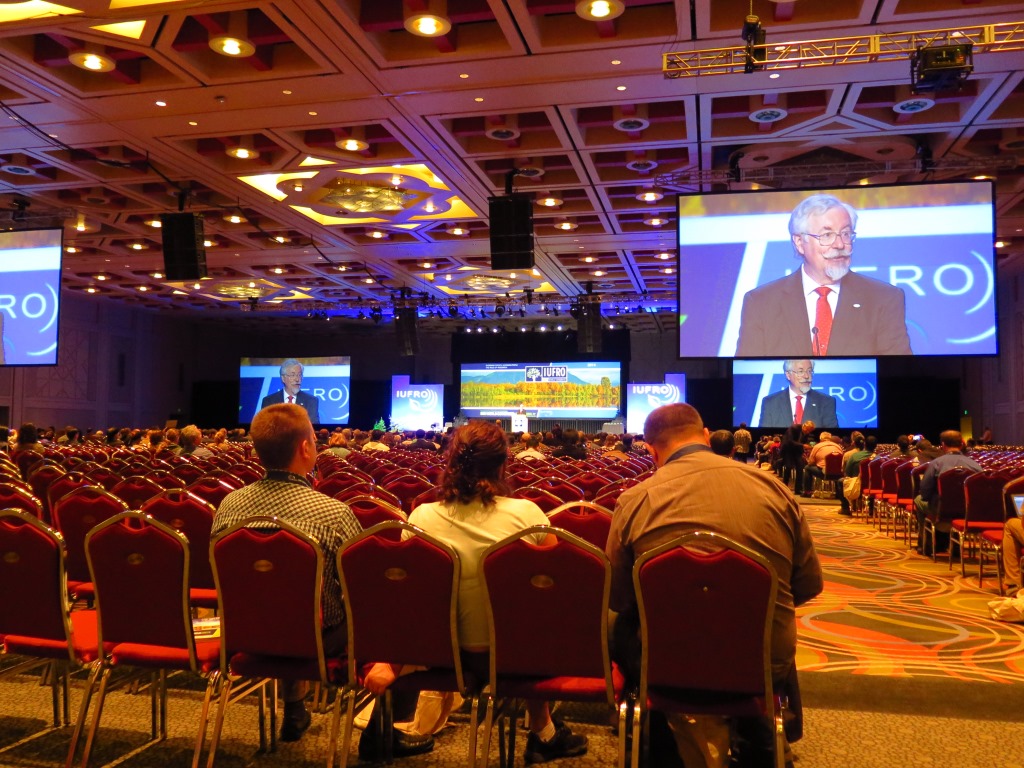 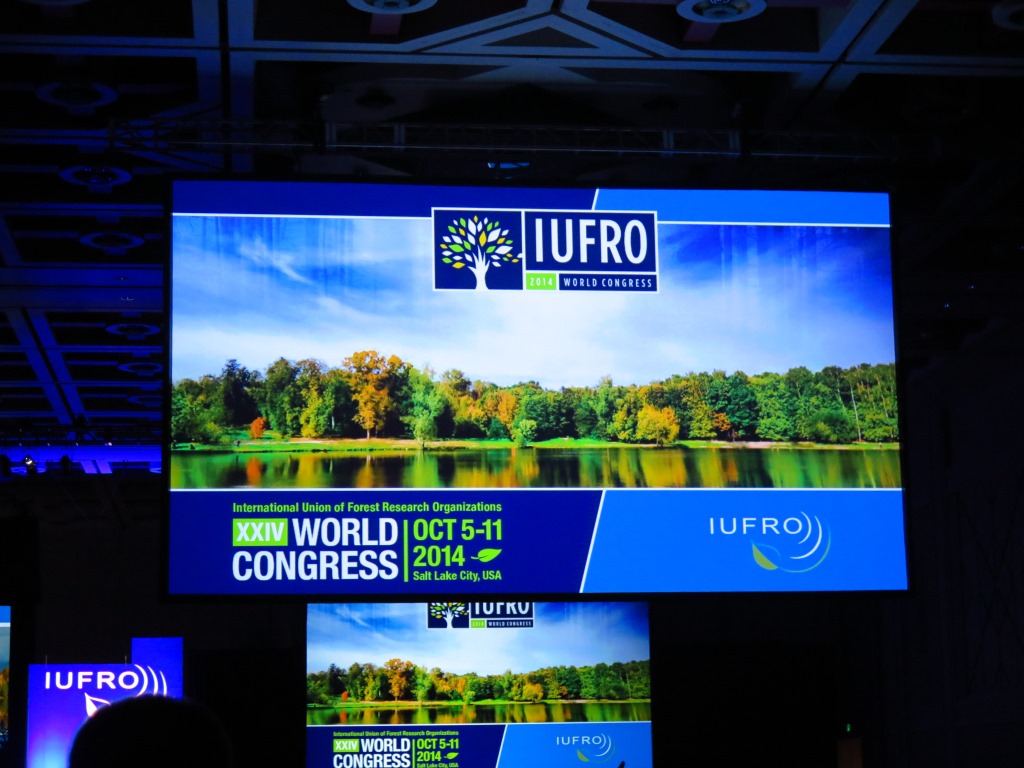 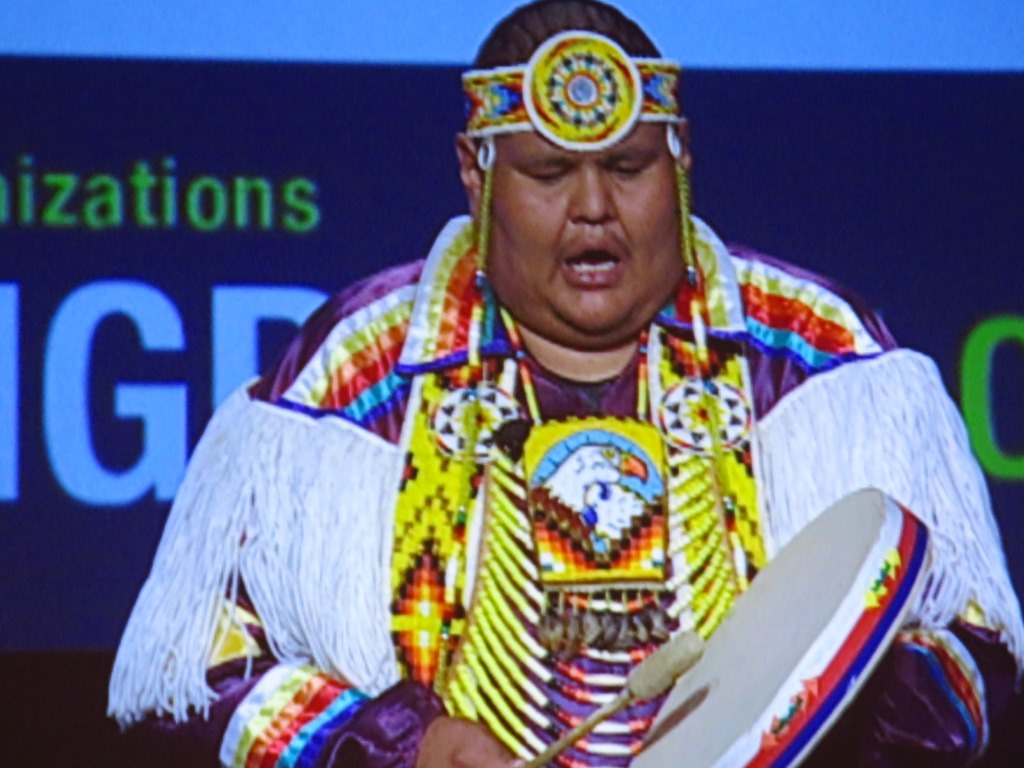 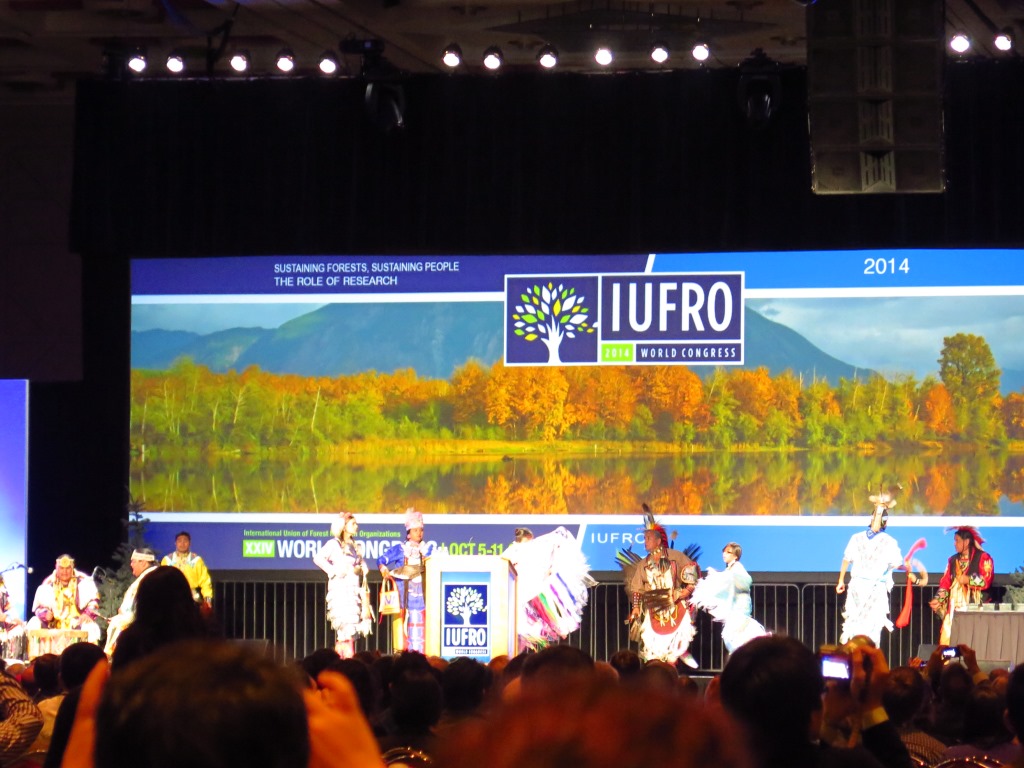 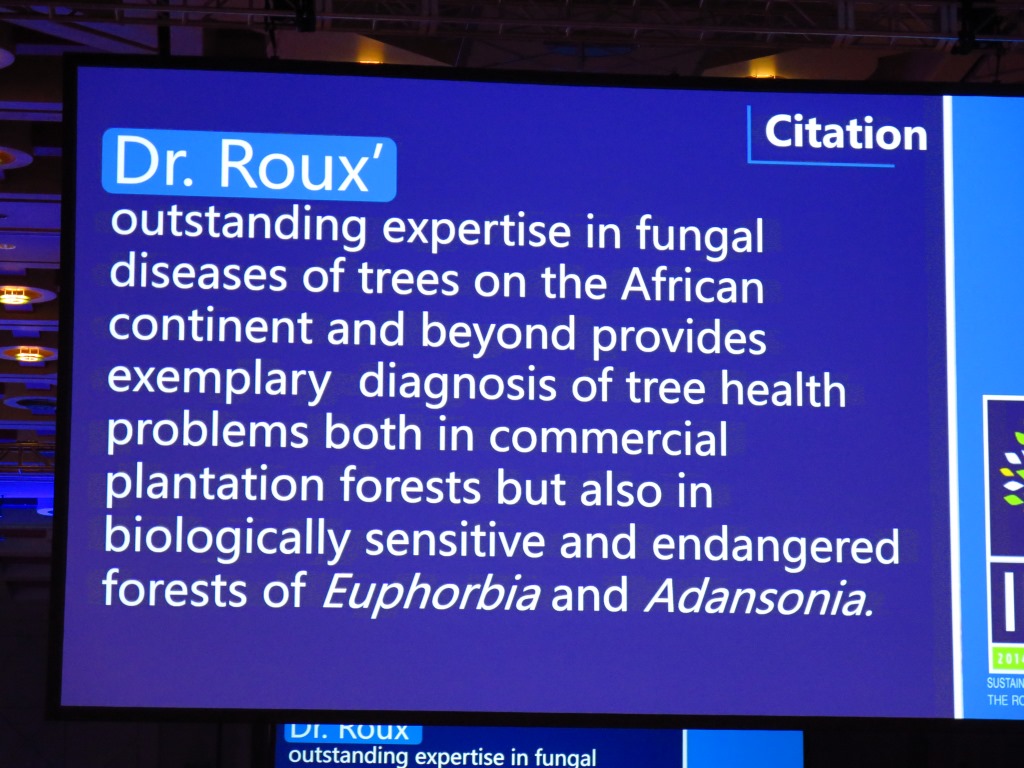 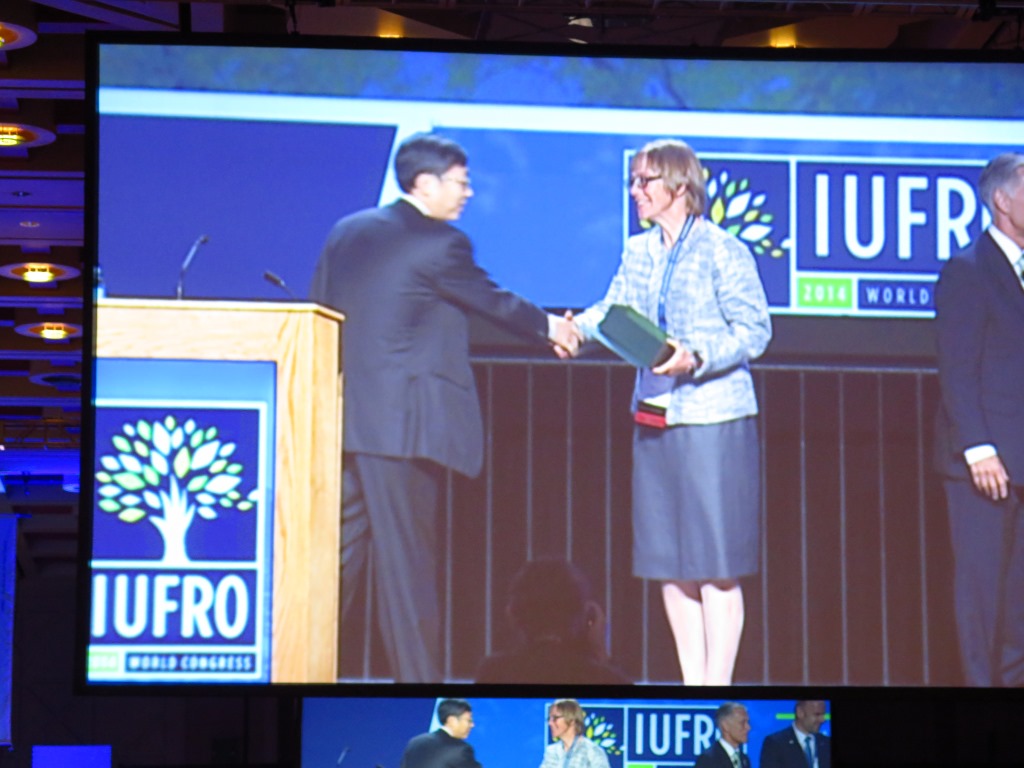 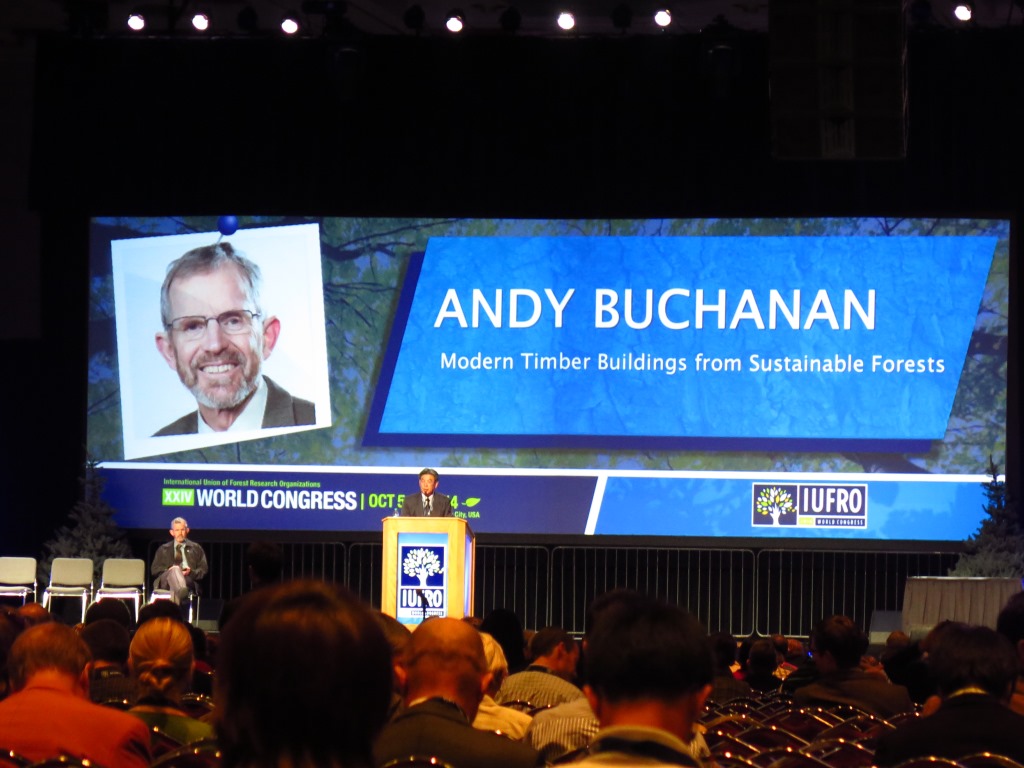 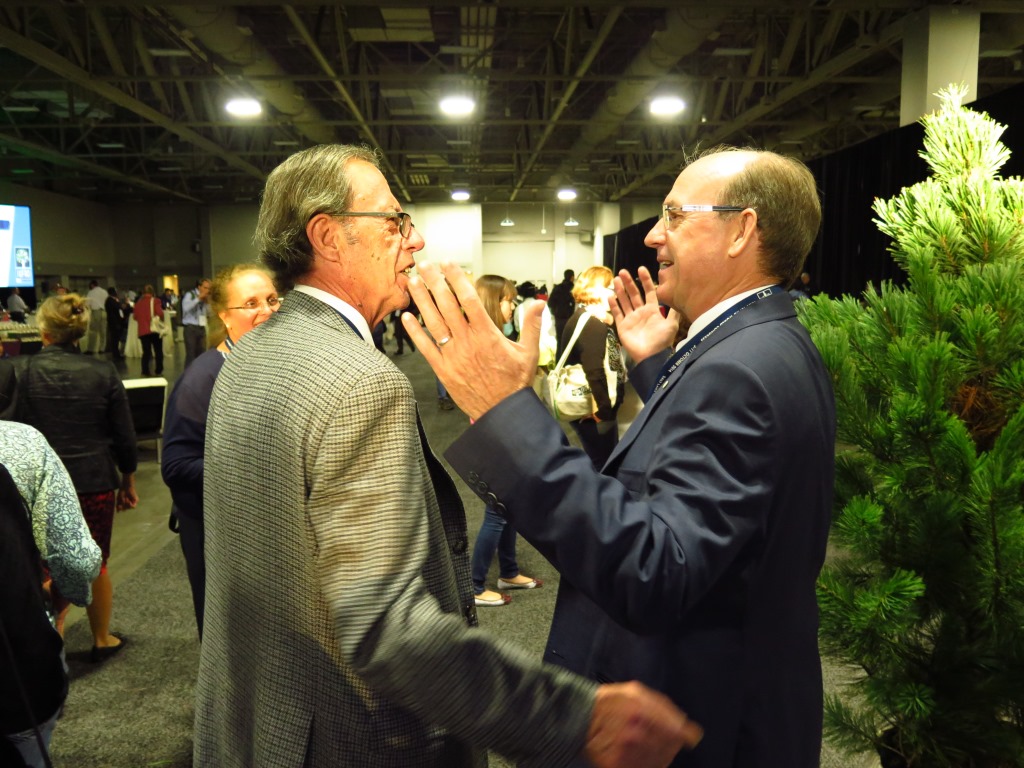 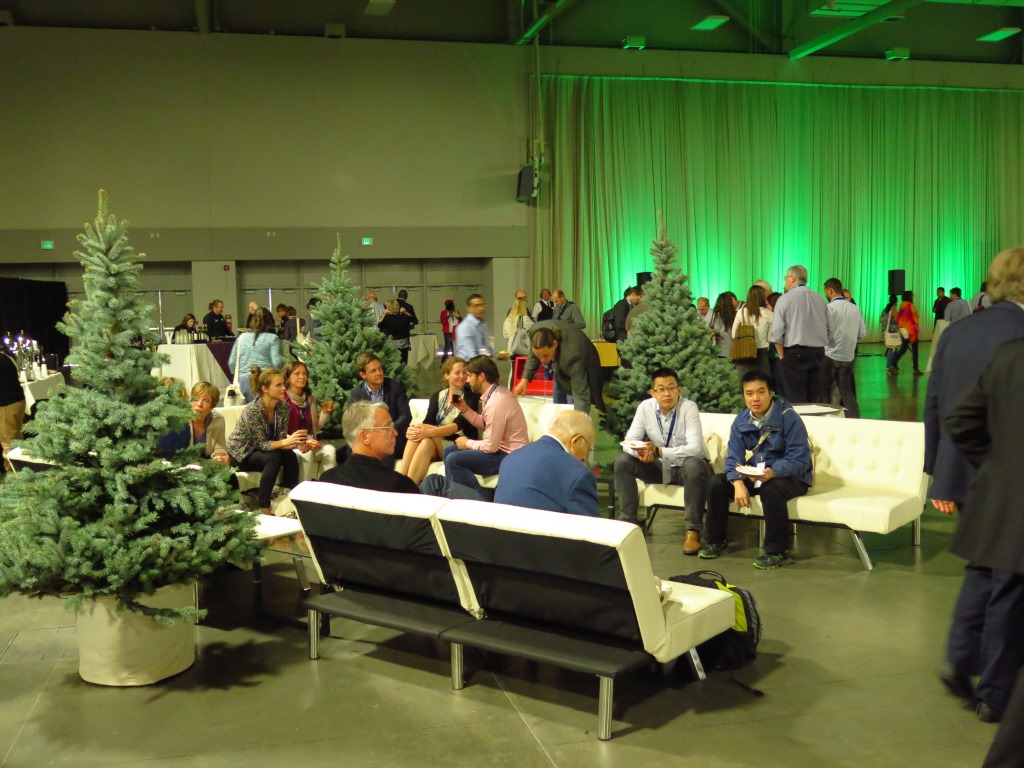 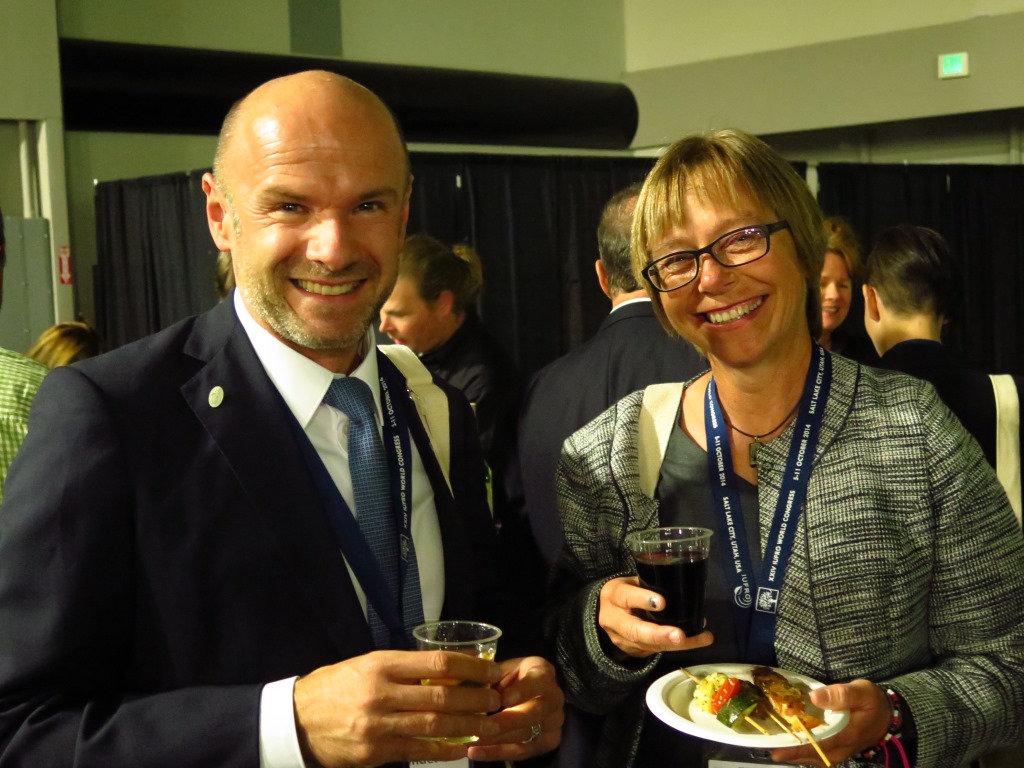 Opening Ceremony and Start of the Academic Programme

Today was the start of the 'Big Show', as Mike put it earlier. With almost 3000 delegates, 1200 oral presentations, 1200 posters, and a convention center which is called the 'Salt Palace', the very laid-back city of Salt Lake was completely ant-like. Apart from the excitement of an enticing research menu, a FABI member yet again stole the spotlight in receiving an academic excellence award.

However, before all the scurrying started, there could not have been a more sincere start to the day than a cultural song and dance representative of the indigenous peoples of the Great Basin. As mentioned yesterday, native American tribes, such as the Ute and Shoshone, were first to establish in the somewhat unforgiving environment of the Great Basin, and forest landscapes were key to their sustenance. This was an entrancing reminder as to why forest research and management is so important today, as it also would have been then - to provide for those of today, and beyond.

Overall, the opening ceremony of the 24th World Congress was telling that folks involved with IUFRO have a strong conservation ethic, which is undoubtedly the most vital part of ensuring long-term protection of forest products, especially in a time when the demand for such products is drastically increasing. What was particularly inspiring, was the address by the Under Secretary of the USDA's Department of Natural Resources and Environment, Robert Bonnie. Secretary Bonnie emphasized the need to maintain forest ecosystem multifunction, to ensure more forests are resilient to environmental changes. Especially since environmental changes are often unpredictable. It was encouraging to hear a politically influential individual underscoring how the only way to protect forest resources is through supporting sound scientific research. Against the backdrop of the once ubiquitous US forest-inhabiting Passenger Pigeon, which is now extinct, the opening ceremony also reminded that through increased global sharing of knowledge, such a tragedy should not have to happen again.

Of course, after all that inspiration, Professor Jolanda Roux received an IUFRO Scientific Achievement Award (SAA). This is an excellent achievement, signifying that the global forest research community recognizes and appreciates Jolanda's perseverance and diligence in protecting Africa's unique and threatened tree biodiversity.

The keynote plenary today was given by Professor Andy Buchanan, from the University of Canterbury, New Zealand. This talk was highly insightful towards the diversity of applications of wood products to sustain livelihoods. Professor Buchanan, a structural engineer specializing in earthquake science, has for many years now tested and advocated the use of engineered wood products during construction, such as laminated veneer lumber, to mitigate the costly and sometimes fatal damage earthquakes usually cause to commonly used concrete and steel buildings. Buildings constructed from such wood products are significantly less affected by earthquakes. This was indeed a very interesting application of arguing for sustainability of forests to help improve the health and wealth of people living in countries prone to a good shake.

Furthermore, a talk by Professor Mike Wingfield today was more food-for-thought. Although a controversial topic to many, he discussed the impacts of trading in live plant material on current and future pest and pathogen outbreaks, and the massive problem it is for managing forest health globally. This is because when there is no control of moving plant matter, pest and pathogen outbreaks would inherently lack predictive power, the consequence of which could be damning to a forest operation. However, it was clear that a realistic answer to this next hurdle to curbing tree die-back is tricky, with trade and quarantine issues not yet well defined in this regard, especially not for developing nations.

The current IUFRO president, Niels Koch, made a bold statement when he officially opened the 24th World Congress by saying it will be the best congress in the 122-year history of the organization. Although I cannot vouch for that per se, I can vouch for the amazing quality of research I have already seen on day 1 at the congress. And I can say that FABI is right up there with the best. Seeing the increased emphasis on forest research in sustaining livelihoods globally, being part of an institution like FABI would provide you the opportunity to help protect our valuable tree resources, whether planted or native.