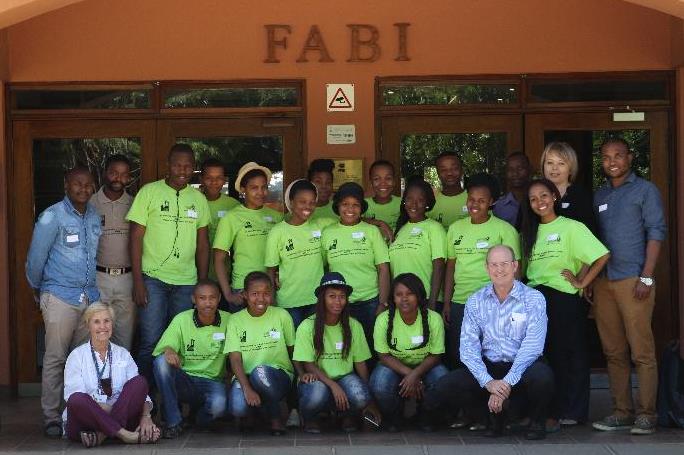 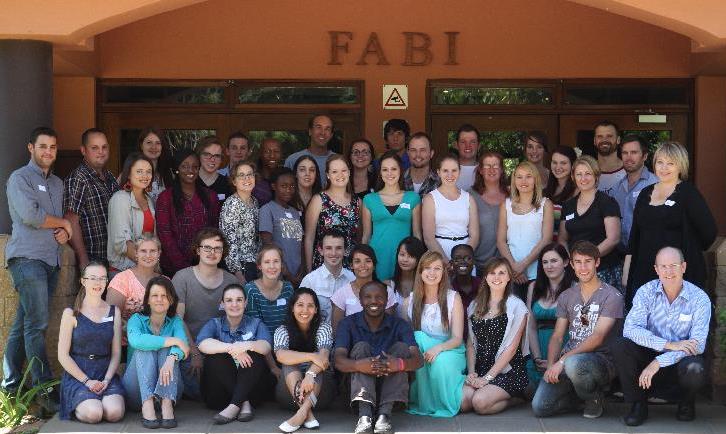 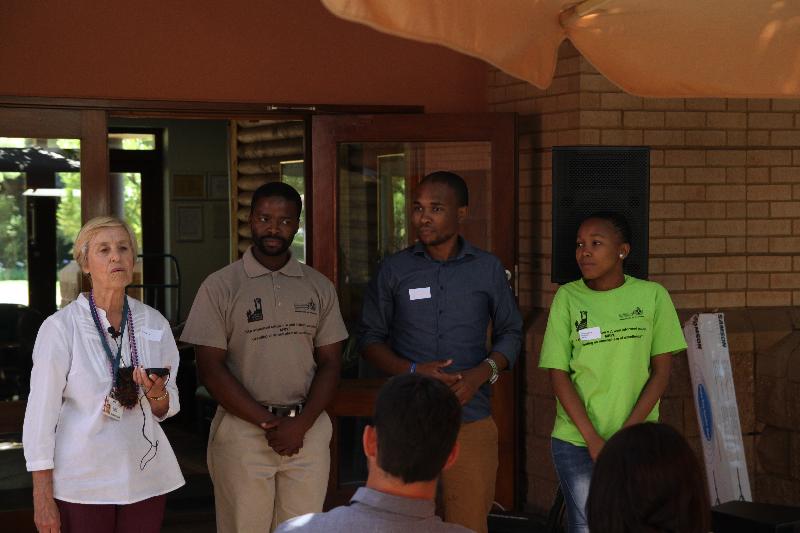 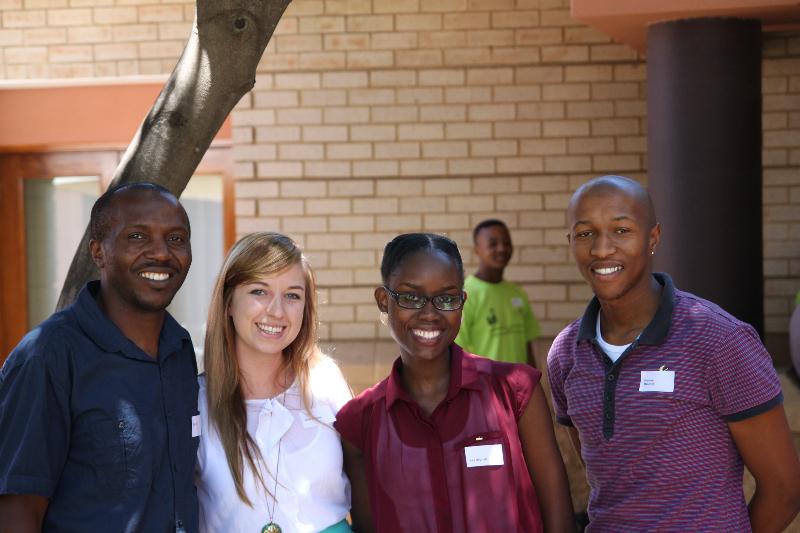 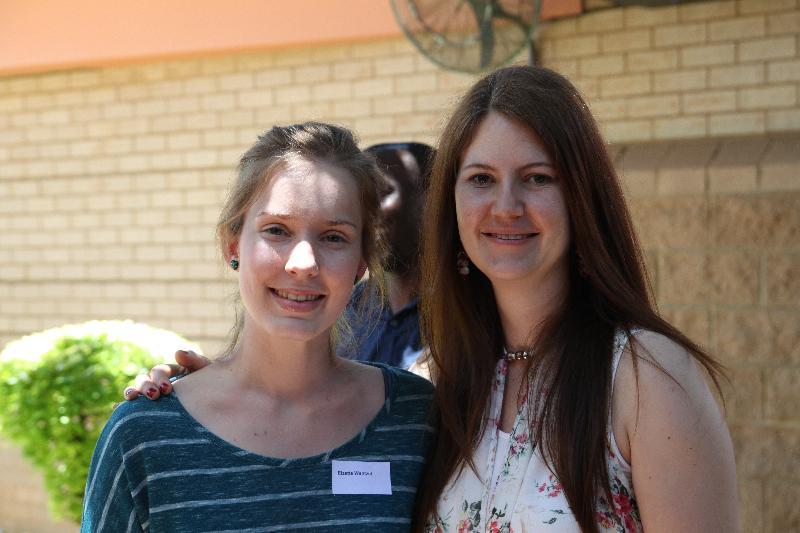 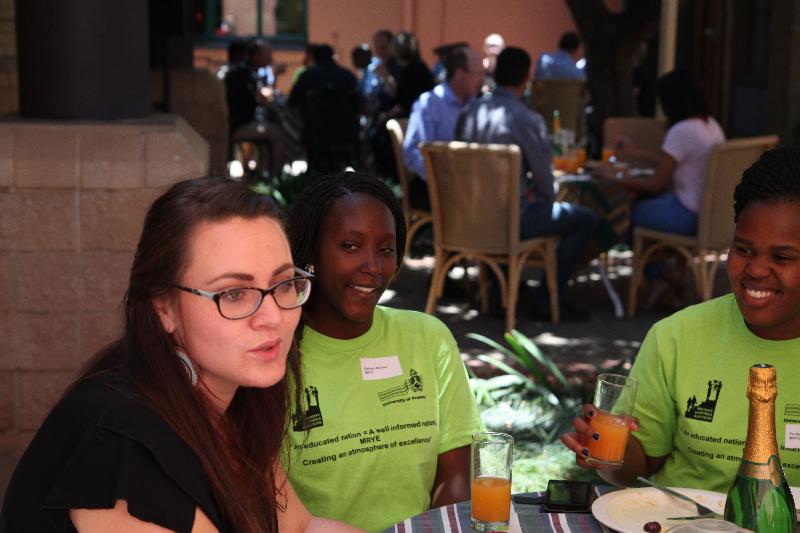 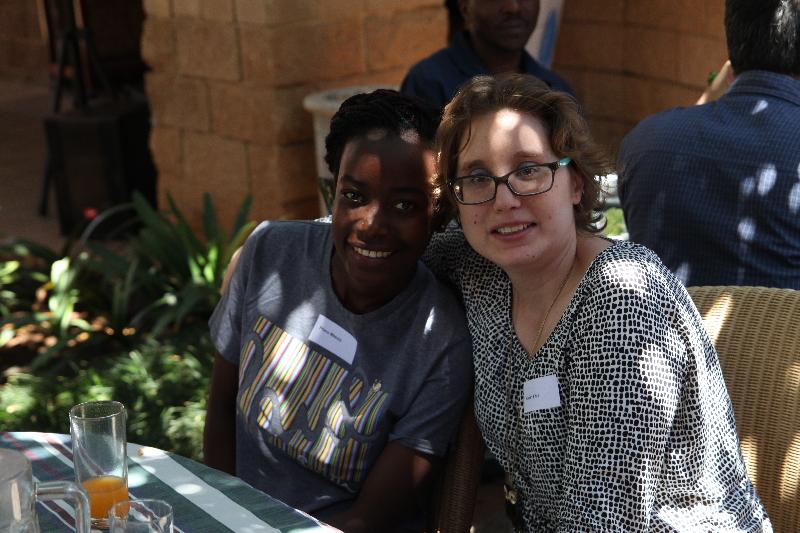 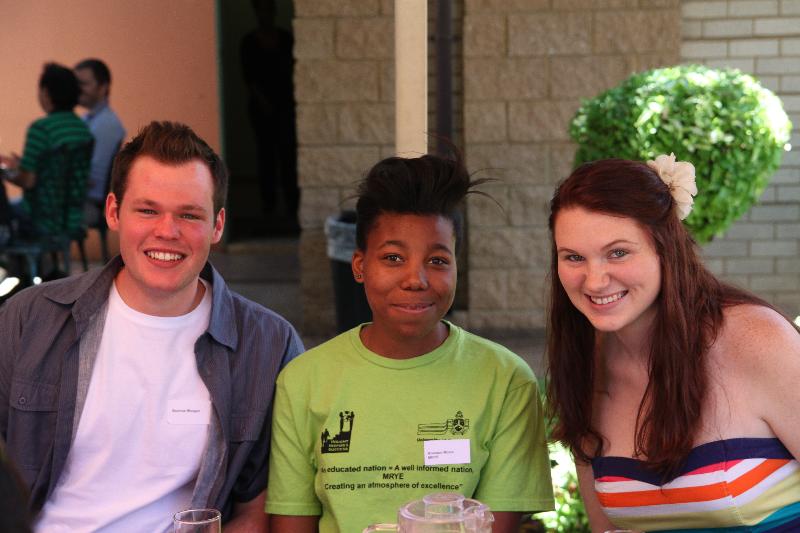 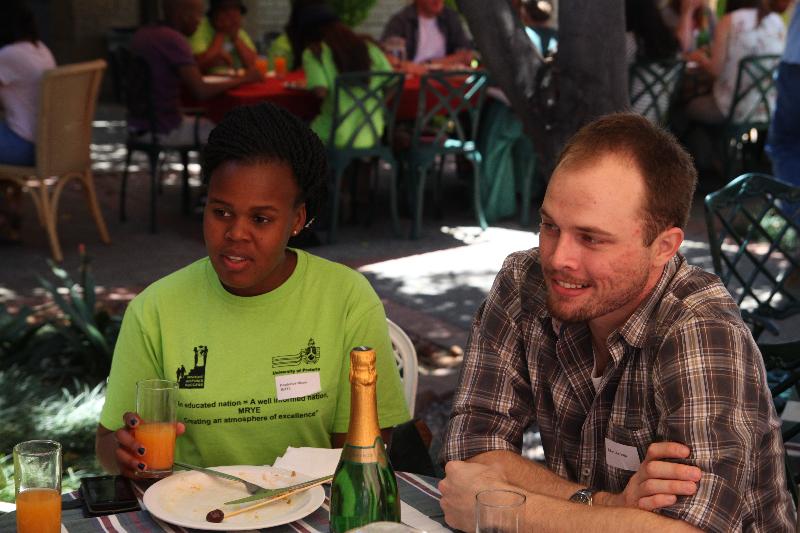 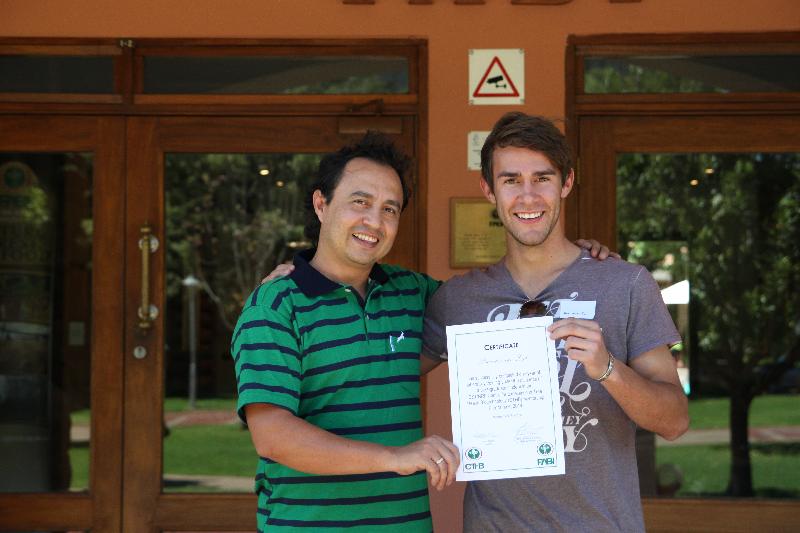 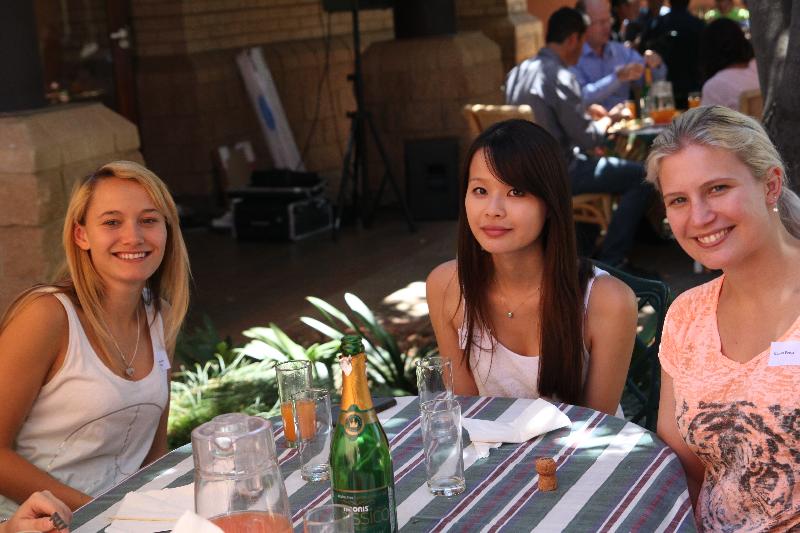 The annual lunch to celebrate the achievements of two of the outreach programmes of the DST/NRF Centre for Tree Health Biotechnology (CTHB) was held at FABI on Wednesday 5 November 2014 and attended by over seventy people. Prof Mike Wingfield, Director of the CTHB and FABI, welcomed everyone to the lunch extending a special word of welcome to two of the previous leaders of MRYE, Samukelo Vilakazi, now with the airforce, and Sithembiso Kumalo who has started his own business, as well as MRYE’s leader for 2014, Nametsegang Thungela and her Vice-leader.
Prof Wingfield stressed the importance of mentoring and collaboration experienced by people in every avenue of life and throughout life. As an example Prof Wingfield referred to the mentoring role the Directors of the original seven DST/NRF centres of excellence established in 2004 have been asked to play at a meeting in Cape Town this month with the newly established CoEs.
The first of these two programmes is the CTHB mentorship programme where second and third year undergraduate science students apply to join the programme and be mentored by post-graduate students in FABI. After a stringent assessment procedure, based on both academic prowess, scientific interest in the fields of research done at FABI and availability of suitable mentors willing to devote six hours per week to mentoring them, between 15 and 20 students are taken into the programme each year. These mentees are taught laboratory skills, scientific principles and protocol and also collaborate with other FABI students working in the laboratory and in FABI in general. In 2005 FABI was able to allocate mentorship bursaries to 12 students while in 2014, this number grew to 23.  The programme has grown from strength to strength proving the importance of mentorship and collaboration in the development of both the budding undergraduate mentees and the post-graduate mentors who in turn have the opportunity to educate and train students through this programme. Approximately 200 undergraduate students and 90 mentors have had the opportunity to take part in the programme since its inception. We are pleased to say that about 60% of the students who have been trained in the programme have continued to do their honours, not necessarily at FABI, and a lesser percentage have continued to complete Masters and PhD degrees. We have managed to keep record of about 80% of all the mentees passing through the programme and are delighted to note that most have done well in their careers both in South Africa and abroad. The CTHB mentorship programme has proved to be so successful, that the Faculty has modelled its own mentorship programme on this.
A second programme funded through the CTHB in which mentorship plays a very strong role, is the MRYE initiative. MRYE constitutes a group of approximately sixty enthusiastic and dedicated undergraduate students in 2014 from various faculties at the University of Pretoria who themselves come from rural areas. This initiative has been supported by the CTHB since 2005. In early 2014 MRYE was successful in its application to the SRC to be recognised as an official UP student organisation thereby enabling it to apply for sponsorship from organisations which fund UP student bodies. Each year MRYE undertakes on average, two to three long trips and one or two short weekend visits during the university vacation to schools in rural areas of Limpopo, North West Province, Mpumalanga, Qwa Qwa and Free State, Kwazulu-Natal and the Eastern Cape. During these trips, they inform the learners about career paths that are open to them, the necessary entry qualifications, courses available and funding which will support their studies. Information brochures and application forms are distributed from all Higher Educational Institutes (HEIs). MRYE members play a mentoring role to any student who subsequently comes from rural areas to any of the HEIs. This role is continued while the new student is at the HEI. Small unofficial branches of MRYE have started up at other HEI campuses including a branch of the University of the Free State, Qwa Qwa, to cater for the needs of these students from rural areas studying at institutions other than the University of Pretoria.
A highlight of the lunch was the presentation of the certificates by Prof Emma Steenkamp and Prof Wingfield to all mentees who had successfully completed the mentorship programme in 2014 thus adding an important skill to their CVs.
The photos taken at the lunch show that a good time was had by all, the camaraderie was great and the process of mentoring and collaboration of all involved in the programmes will continue for many years to come.
Photos: (Top) MRYE outreach group. (Second from above) CTHB mentors and mentees. (Others) Mentors, mentees and members of the MRYE outreach team. More photos can be seen in the gallery.