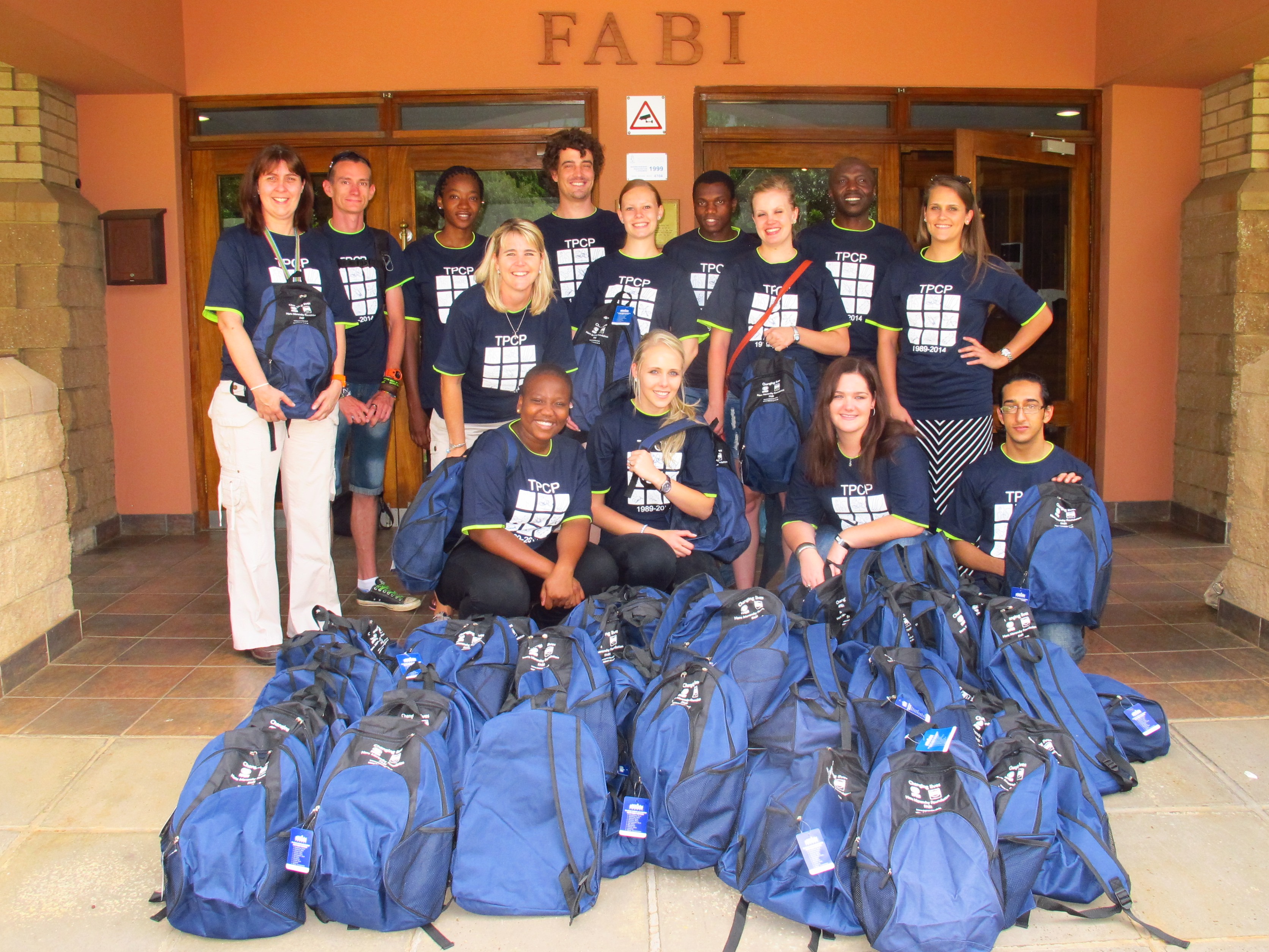 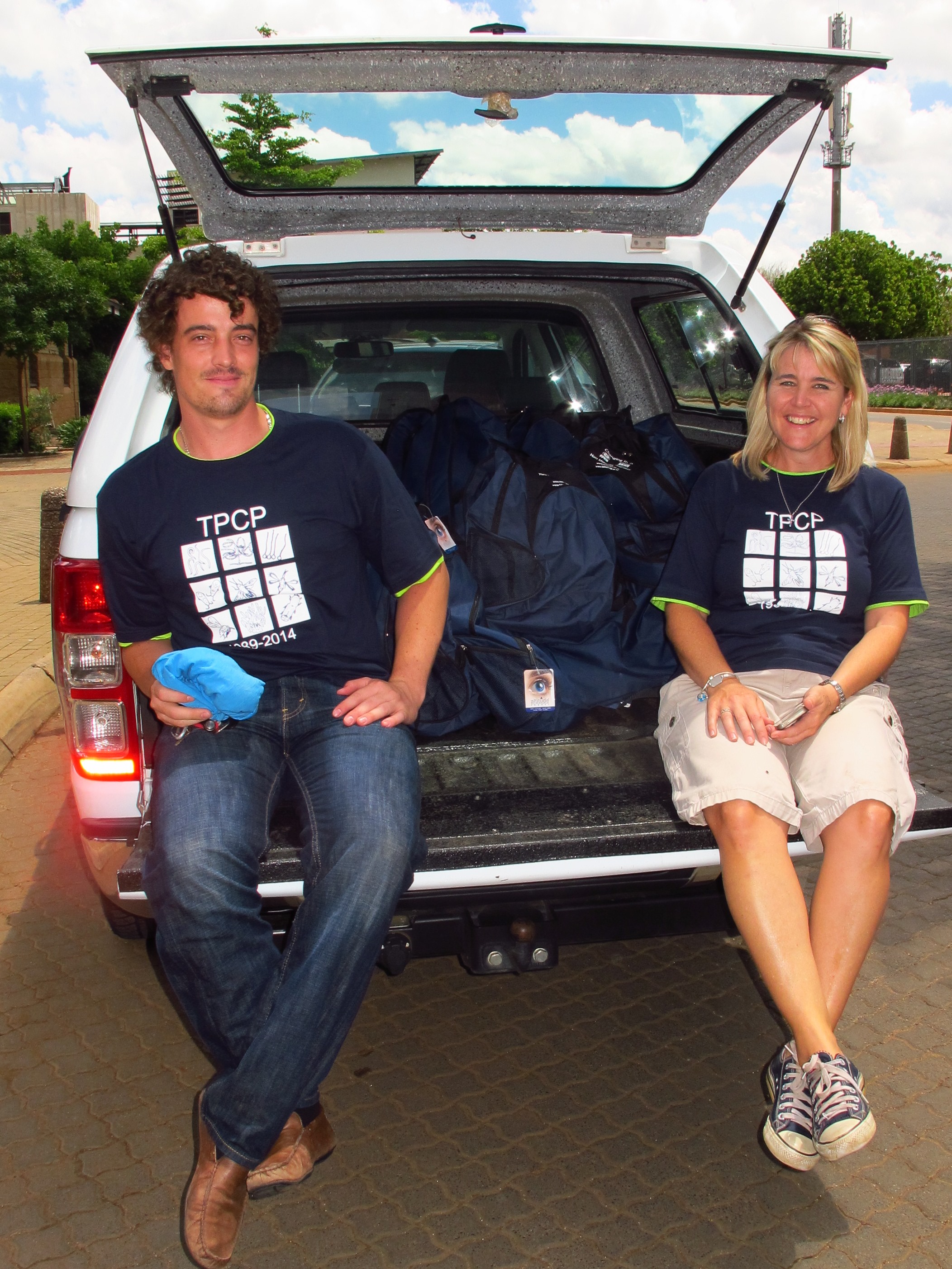 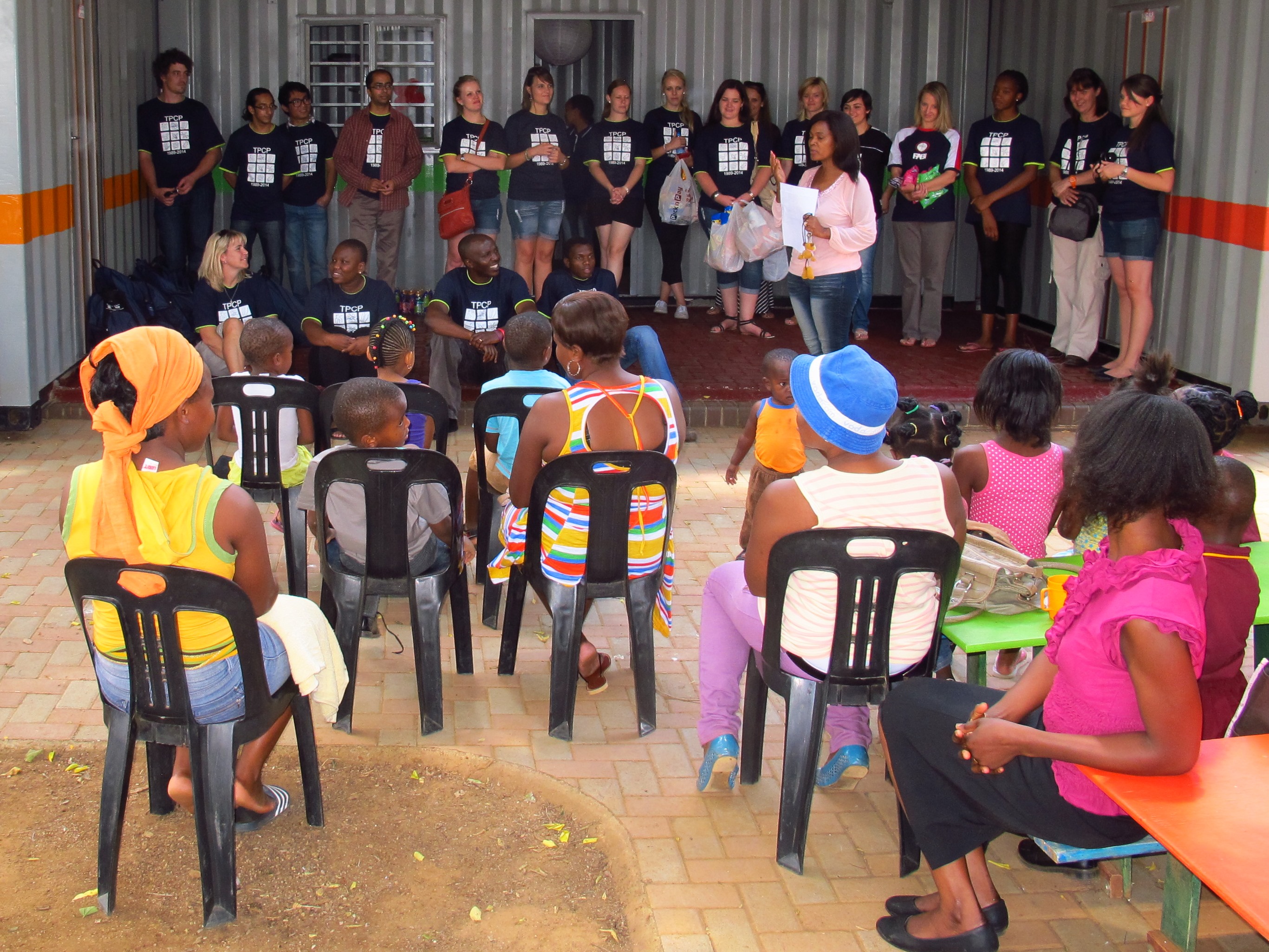 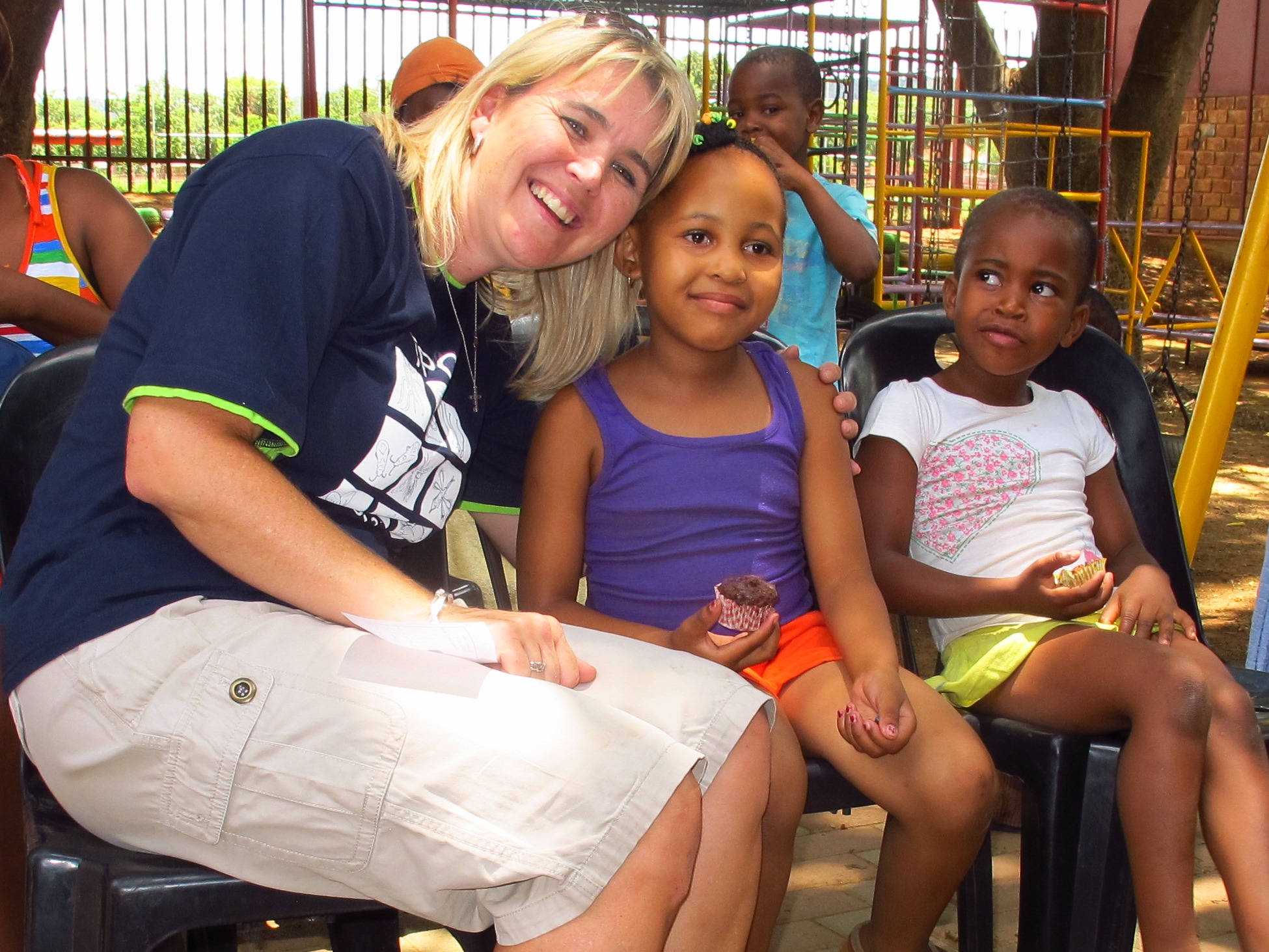 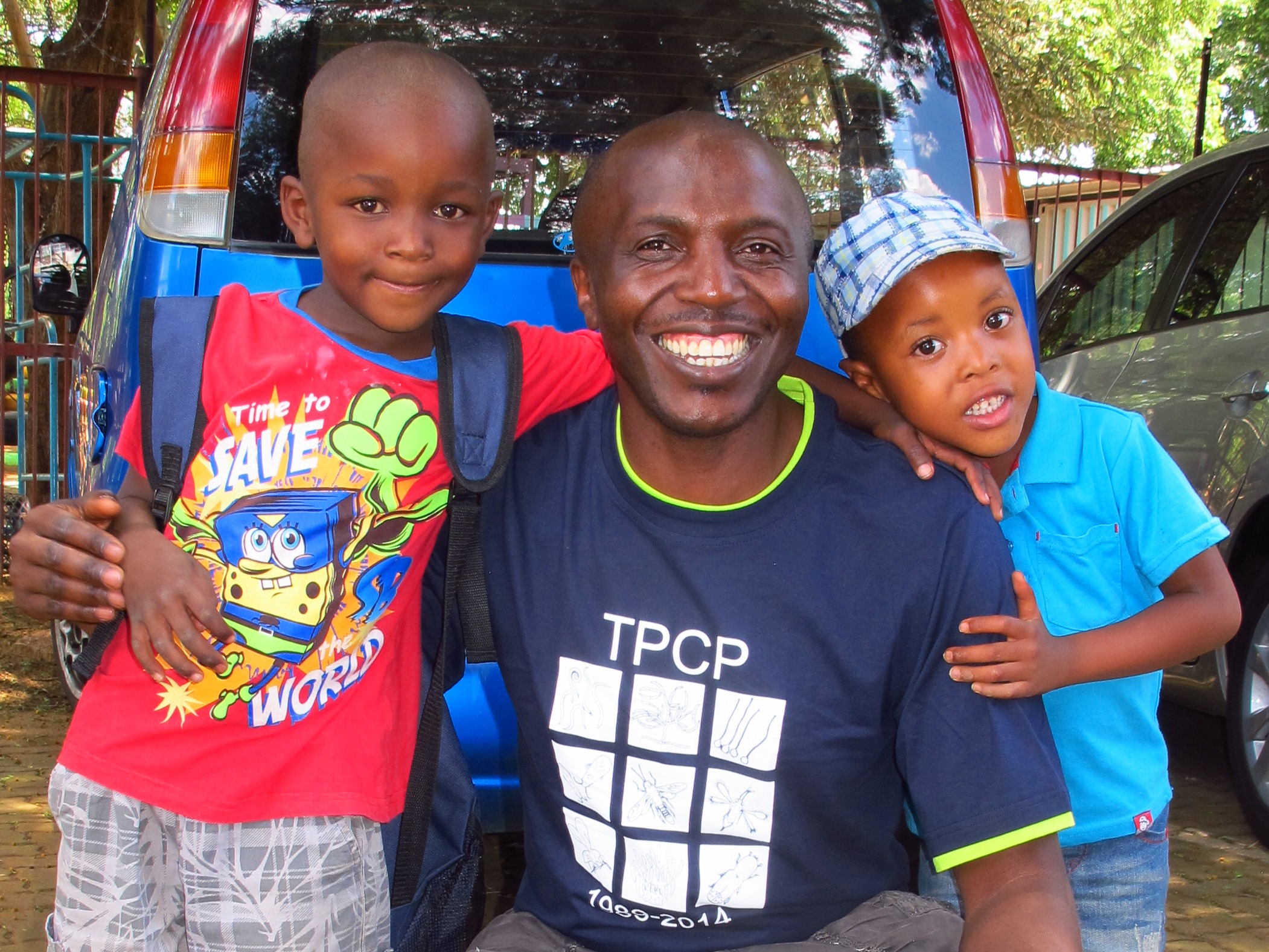 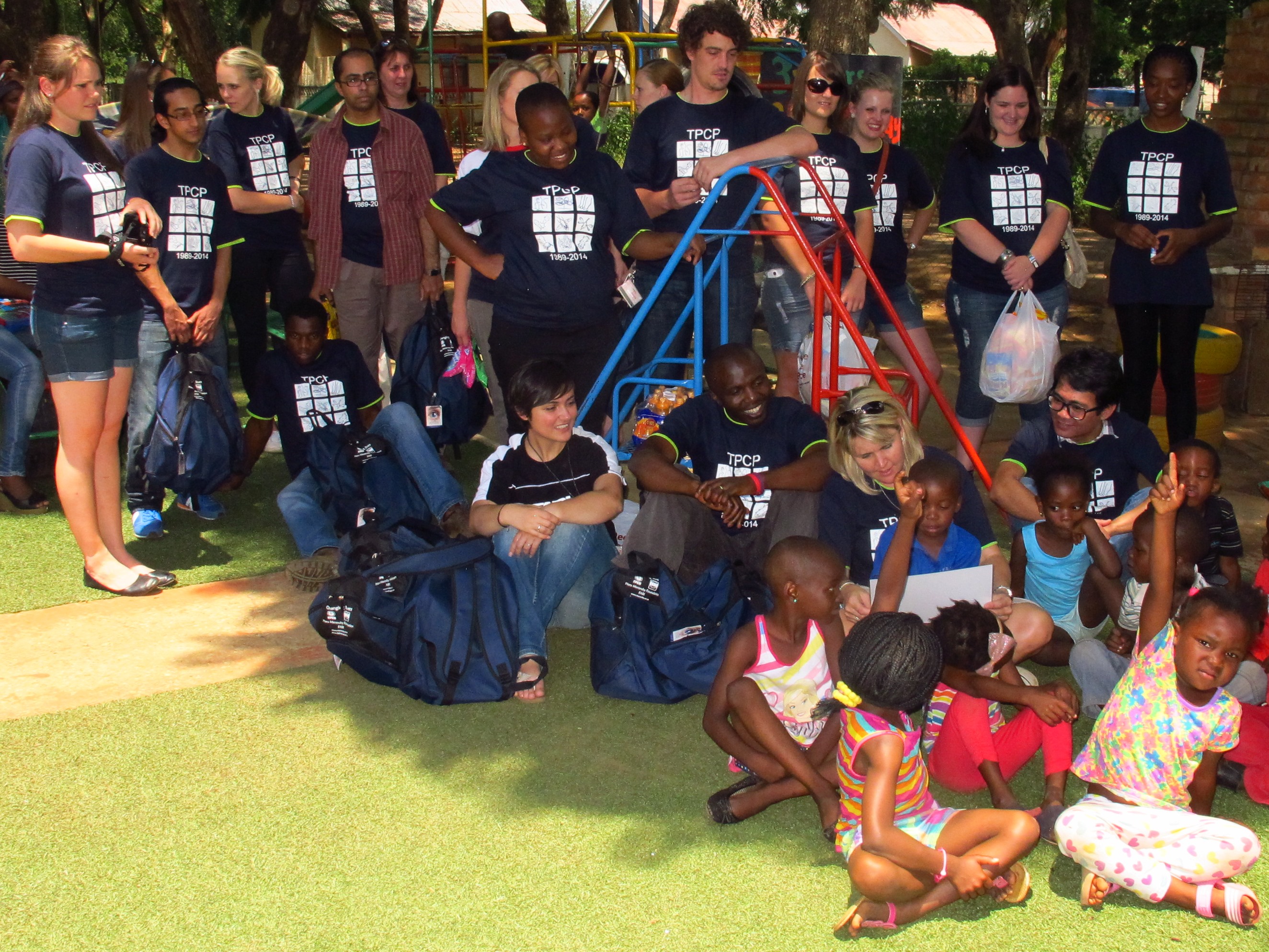 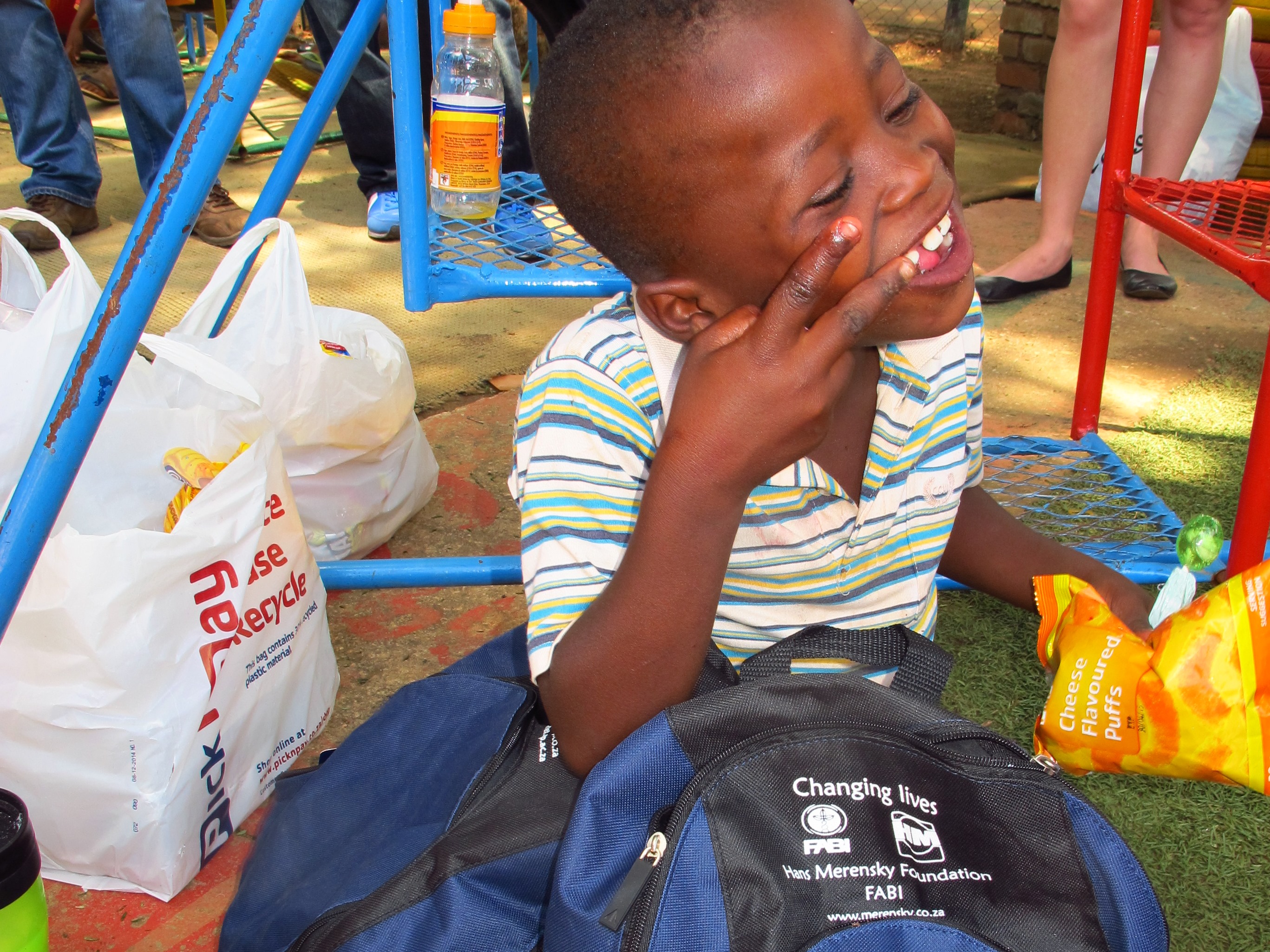 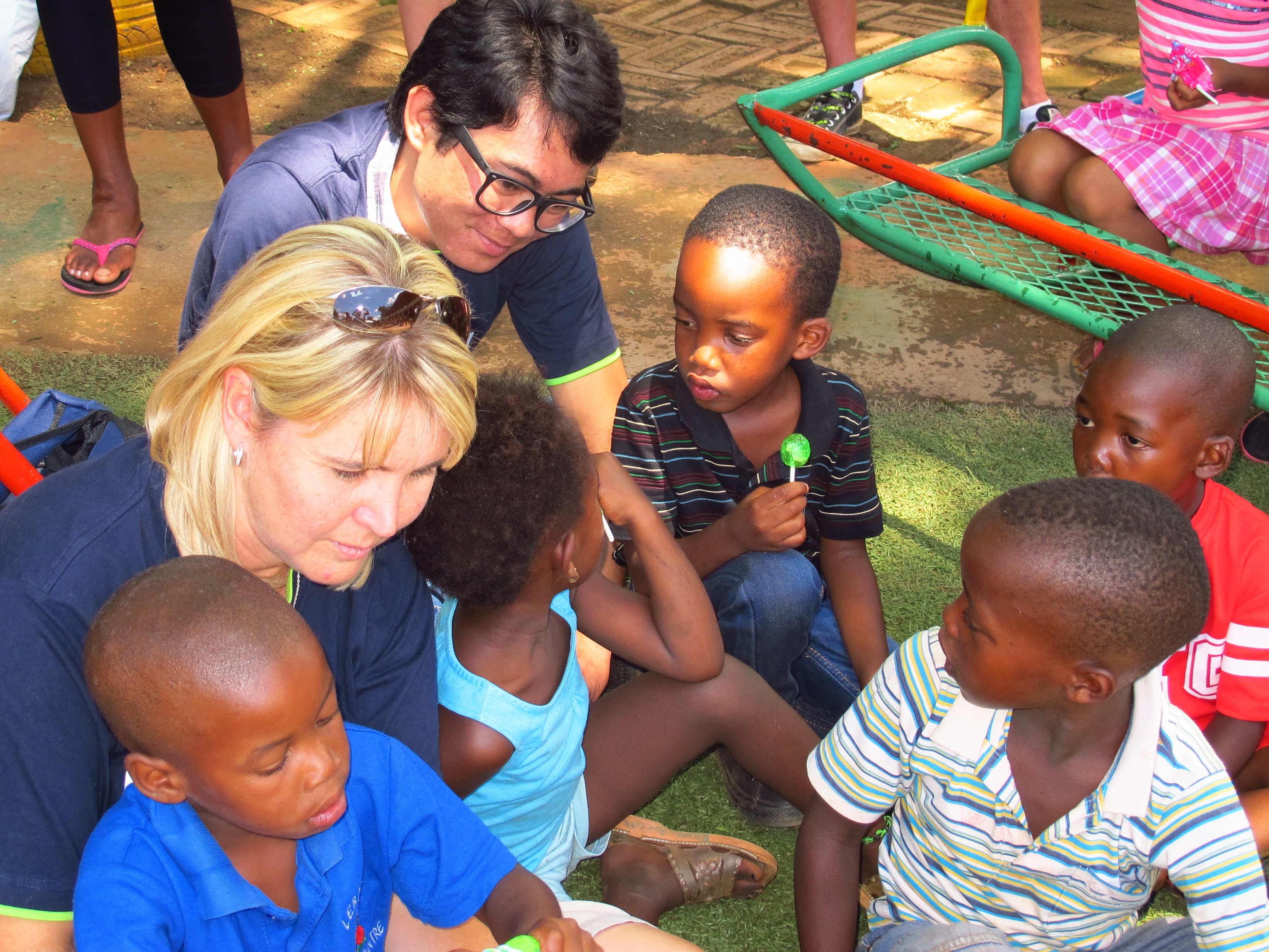 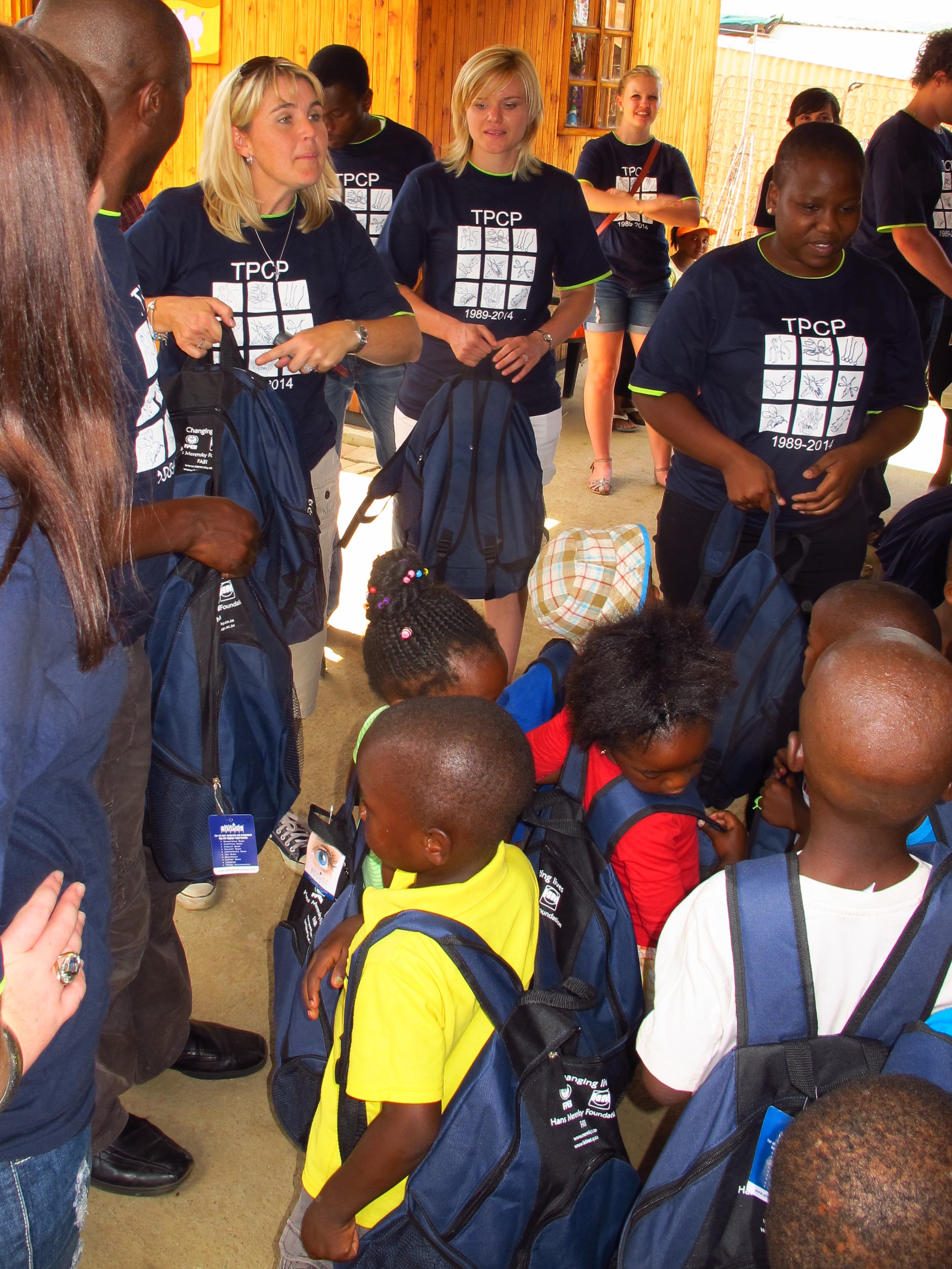 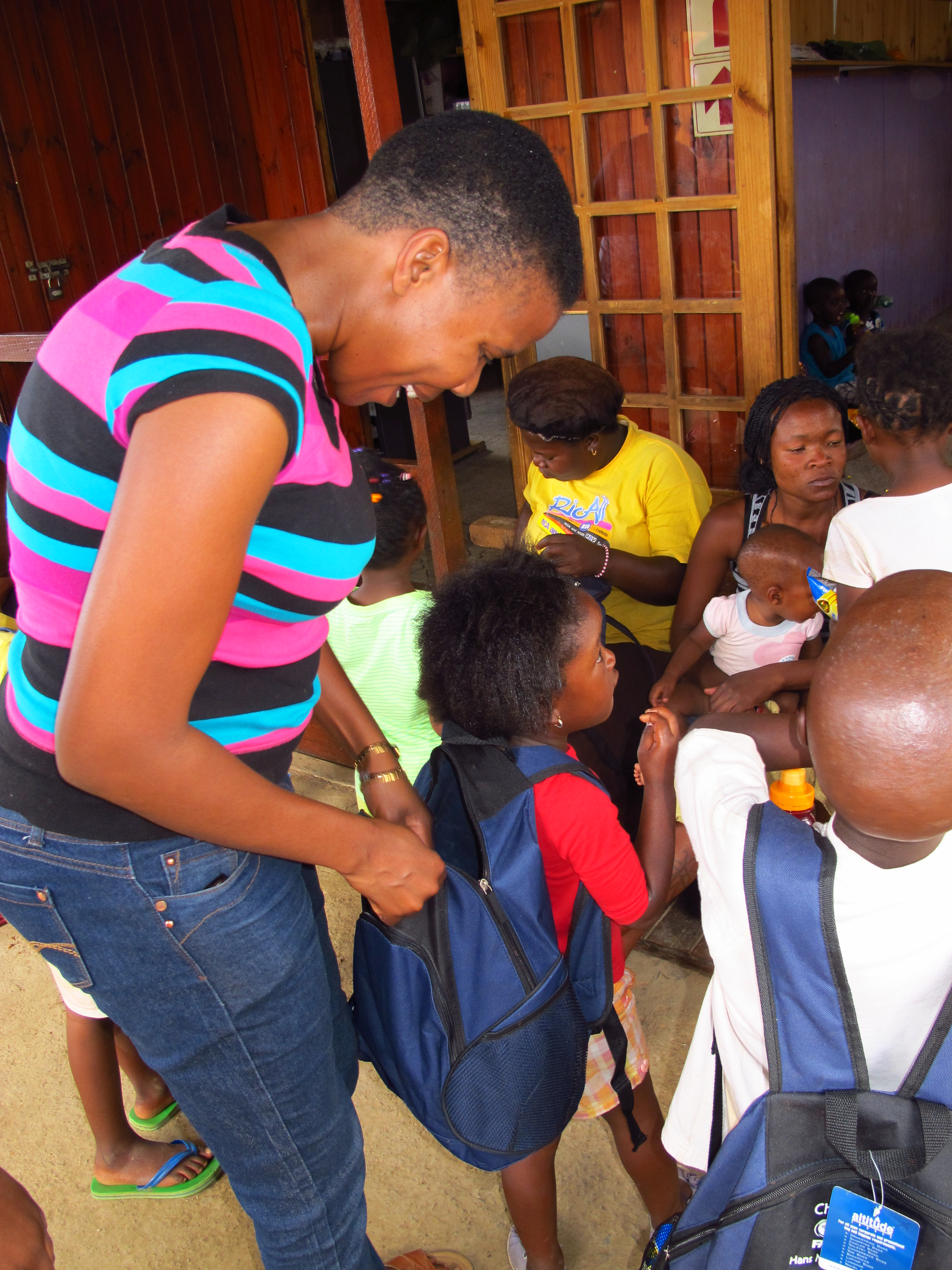 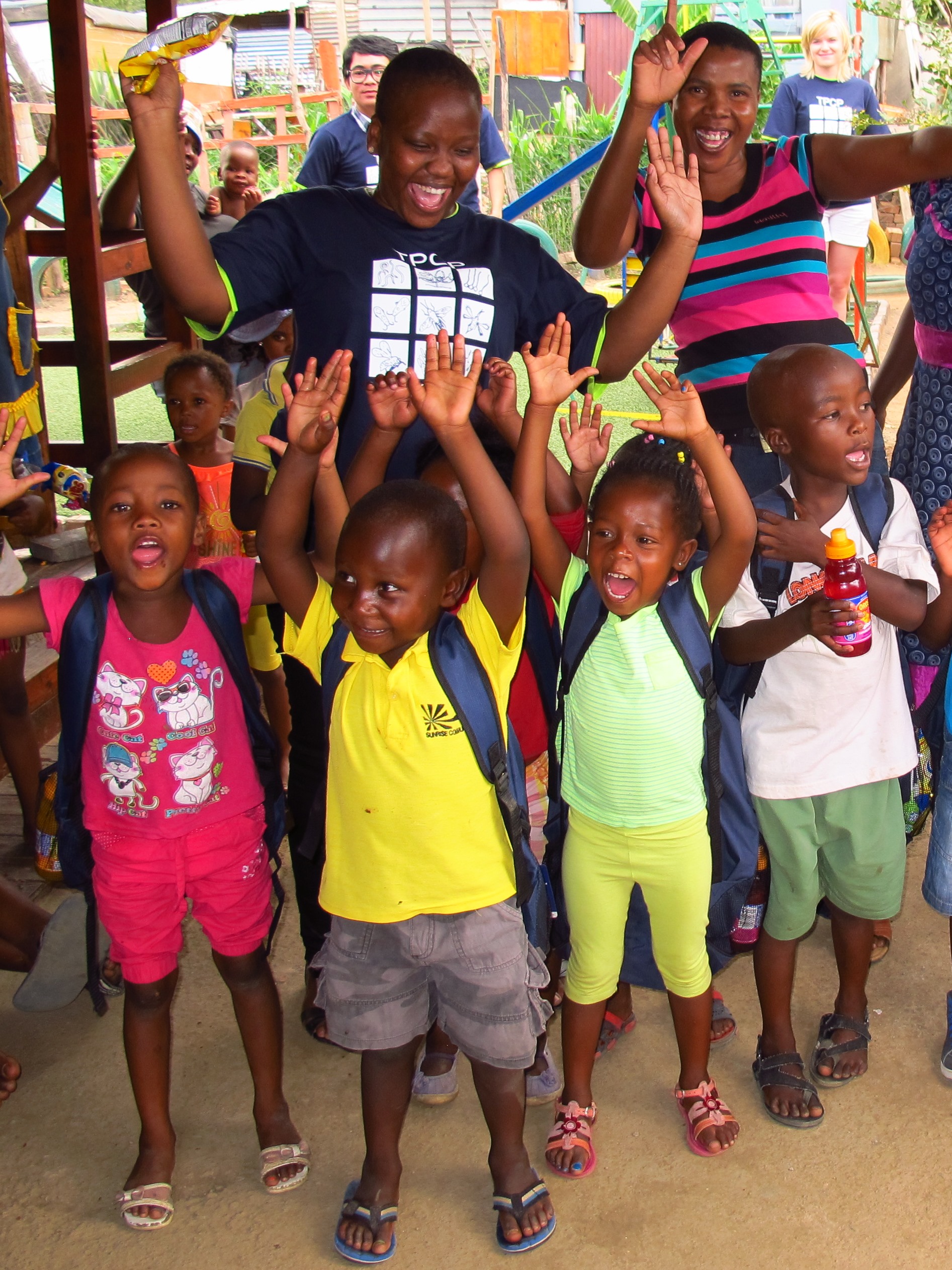 Over the past few years staff and students of FABI on an annual basis initiated, contributed and participated in welfare projects as part of its social responsibility programme. At the end of 2014, it was decided that instead of a Christmas party for under-privileged children, we should rather redirect our contributions to some aspects of education, which remains the primary objective of the institute. FABI thus partnered with the NEA Foundation to donate 80 fully furnished school bags to learners from underprivileged communities. A total of R18 000 was raised by FABI staff and students with the Hans Merensky Foundation, a research partner of FABI, donating a generous R10 000 to this total.
The schoolbags were distributed by a team of FABI staff and students led by Prof. Noelani van den Berg who drove this charity project. The recipients were learners from the Bambino Crèche in Danville (photos below, top row), the Thando West Fort Community Crèche in West Fort (photos below, middle row), and the Sunrise Community Crèche in Melusi (photos below, bottom row). The bags contained stationery and all the material necessary to allow the Grade 1 learners to start their school careers well equipped. The team also took along some sweets, crisps, cold drinks and cupcakes for the kids to enjoy the day before schools open in the Gauteng Province.
The NEA Foundation was established three years ago by Marlie van Vuuren and Lelanie Steyn. The pair had previously been involved in a Danville-based community outreach programme but decided to focus their attention on Early Childhood Development Centre development and support, and thus established the NEA Foundation in 2012. Nea is a Swahili word meaning “purpose, to prepare the way, to set in motion, to be a starting block”.
“We want to be able to move and be in places where the need as well as the potential for change is really big. We want to get involved with the people in the community to start projects required in their specific community and then equip them to take responsibility for their own projects and lives. Our aim, as a Non-Profit Organisation, is to prove to them they don’t have to depend on us to do everything. Our role is to support them in their dream and purpose, and to encourage them to be what they were meant to be,” explains Marlie.
Sunrise Community Crèche in Melusi was established in 2011 by Principal Francina Mashita. The school has 56 children in its care of which 19 will start Grade 1 in 2015. The Bambino Crèche in Danville is a community crèche with 38 children starting Grade 1 in 2015. The crèche’s Principal, Sylvia Buthelezi, says the crèche has 120 children enrolled ranging in age from 3-6 years. The Thando West Fort Community Crèche is located on the premises of the former West Fort Leprosy Hospital that has for the past seven years operated as a community crèche. Thando also provides after school care for learners aged 6-18 years of age where they are assisted with homework and provided with a meal when food is available.