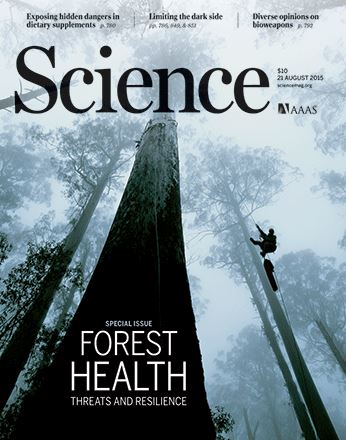 During the past year, FABIans has set a new record for the highest number of research or review papers in internationally recognized journals since the Institute was established in 1998. The number of publications has grown from 28 in the founding year of FABI, to 91 in 2015. Although there are actually 104 papers listed with 2015 as publication year on the FABI website, seven of these are online early papers that will eventually receive volume and page numbers and a 2016 publication date. Another six are commentaries or editorials written by FABIans that we do not count as research papers.

The 91 papers were published in 43 different journals. The paper in the highest impact journal was published in Science, following the highlight of the 2014 paper in Nature by another group of FABIans. The journal in which the most FABI papers were published was Plant Pathology (Impact factor 2.121), followed by eight papers in IMA Fungus, the relatively young official journal of the International Mycological Association (IMA), anticipating its first impact factor to be announced this year. Six papers appeared in New Phytologist (IF 7.672) and another 13 in journals with impact factors above 4.0.

Eleven FABI papers have already appeared online in 2016. Together with the seven papers from 2015 that appeared online, but that will get 2016 dates, there are thus actually already 18 FABI publications for this year! This can only mean that 2016 will be another record year where FABI might score its first publication century!

A complete list of all FABI publications can be viewed here.