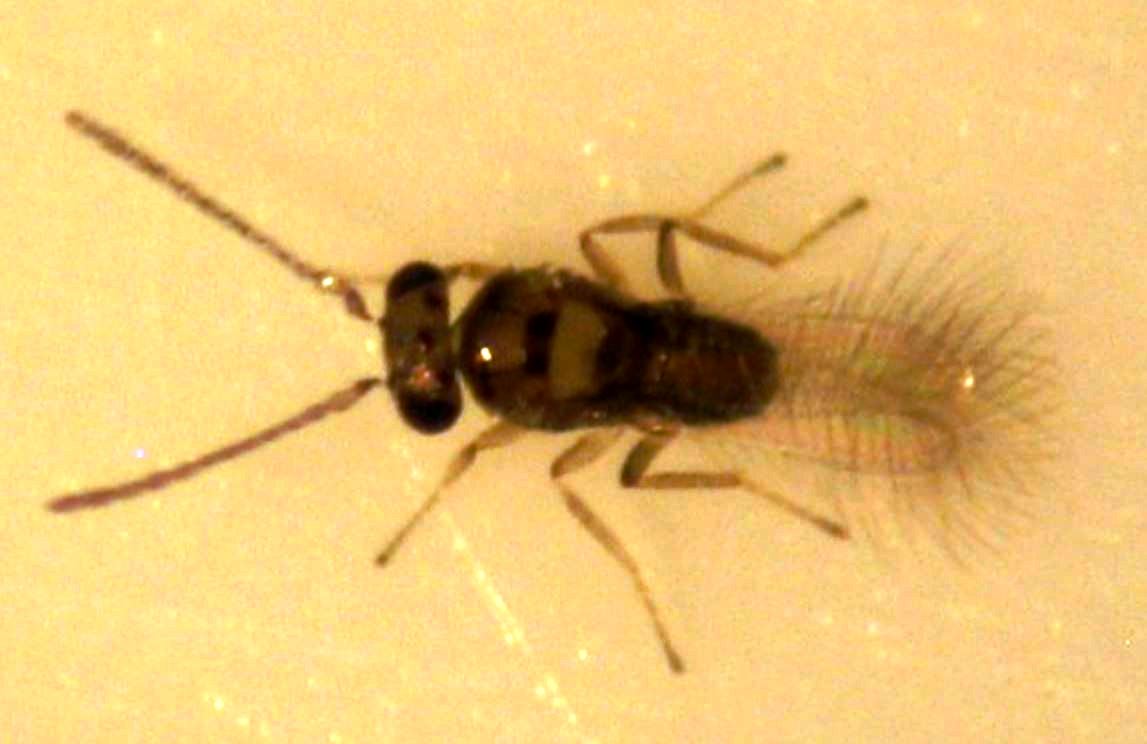 The Tree Protection Co-operative Programme (TPCP) based at FABI has recently received permission from the Department of Agriculture, Forestry and Fisheries (DAFF) and the Department of Environmental Affairs (DEA) to release the parasitic wasp Cleruchoides noackae (Mymaridae), for the biological control of the Bronze Bug, Thaumastocoris peregrinus. This is an incredibly important milestone in terms of ensuring sustainable plantation forestry in South Africa and it marks the culmination of a long and often tedious process involving amazing commitment and effort on the parts of many people.

Cleruchoides noackae was first imported into the FABI Biocontrol Centre at the University of Pretoria in 2008. This minute parasitic wasp (less than 0.5mm in length) is extremely difficult to rear, in part because it is very delicate and thus difficult to handle. It was only after considerable efforts to develop new rearing techniques that studies on its biology and host specificity could commence. These studies, which needed to be carried out with meticulous detail, provided the first study of C. noackae biology (now published) and showed that C. noackae was host specific, and thus safe for release.

An application for permission to release C. noackae was submitted to DAFF by FABI on behalf of the forestry industry in January 2013. After in depth review it was concluded that C. noackae was safe to release in South Africa as a biological control agent.

The release strategy for C. noackae in South Africa must still be finalized. But, it will likely follow a similar classical biological control approach to that used with Selitrichodes neseri, the biological control agent for Leptocybe invasa developed and released by the TPCP in 2012. Thus, releases will most likely be made as broadly as possible and the released individuals will be expected to establish and spread in those areas.

At this stage it is impossible to know what impact C. noackae will have on T. peregrinus populations. But, C. noackae has been released as a biological control agent in Chile and Brazil, and preliminary results show that the insect has established well in these areas. Clearly post-release monitoring will be required to determine the success of the releases and the rate of establishment of C. noackae in South Africa.

Many people and organizations have contributed to the considerable effort that has lead to this point where C. noackae can now be released. However, special thanks are due to the members of the TPCP and particularly the TPCP Board, who have supported the work both financially and otherwise; the Department of Trade and Industry (DTI) through their THRIP initiative; the National Research Foundation and the University of Pretoria for financial support; the staff of DAFF, who dealt speedily and professionally with the application for release; Prof. Stefan Neser who, together with Ryan Nadel of the ICFR as part of his Ph.D. at FABI, assisted in importing the original C. noackae into South Africa, and has provided incredible guidance in the rearing and experimentation of C. noackae from 2008-2013; Ryan Nadel and Eston Mutitu who added substantially to the understanding of C. noackae during their Ph.D. studies; Dr Annie Noack (Australia) for providing invaluable advice on the rearing of C. noackae and who has sent numerous consignments of C. noackae to the FABI Biocontrol Centre for study, and last but not least, the technical staff of the FABI Biocontrol Centre, in particular Marlene Harney and Samantha Bush, together with Joseph Khadile, Tanya Joffe, and a number of NMMU students, whose great dedication and ingenuity has made this release possible.

Photos: see photographs of the new biocontrol agent in the attached pdf.