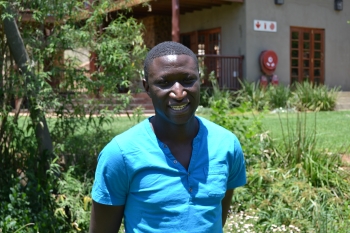 FABI congratulates Stanford Kwenda on completing his PhD degree. Last week Stanford successfully his PhD thesis. Stanford reached this milestone under the supervision of Prof. Lucy Moleleki, research leader in the Bacterial Genomics and Plant-Pathogen Interactions group at FABI, and Prof. Paul Birch of the James Hutton Institute at Dundee University in Scotland. His external examiners were Prof. Melanie Filiatrault from Cornell University in the US, Dr Andrew Pitman of the Institute for Plant and Food Research at Lincoln University in New Zealand, and Dr Sanushka Naidoo of the Department of Genetics and FABI.

His project was titled “Transcriptome profiling of potato plant stems challenged with Pectobacterium carotovorum subsp. brasiliense and elucidation of the role of small RNAs in Pectobacterium survival mechanisms”. His study sought to understand the basis of tolerance of a potato cultivar against Pectobacterium carotovorum subsp. brasiliense (Pcb), one of a group of pathogens that cause soft rot and blackleg in potatoes. Stanford also investigated bacterial RNAs in enabling bacteria, particularly soft rot enterobacteriaceae, to adapt to harsh environments.

Stanford successfully published two articles in BMC Genomics and also got married while completing his PhD research. He is currently a postdoctoral fellow at the University of the Witwatersrand’s Sydney Brenner Institute for Molecular Bioscience, where he is involved in a project focused on identifying potential viral (HIV-1) and host targets for functional cure strategies against HIV-1 infection.