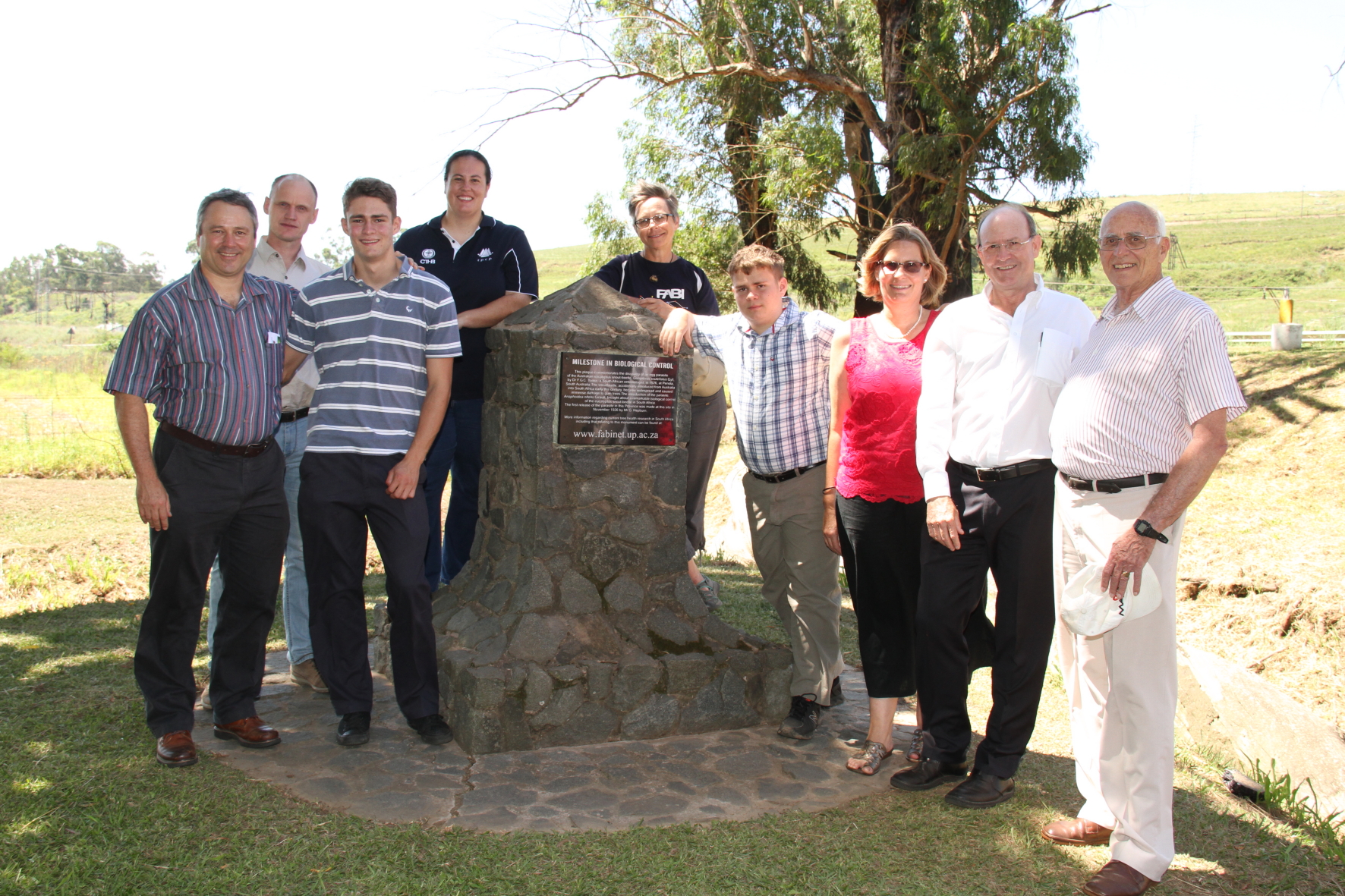 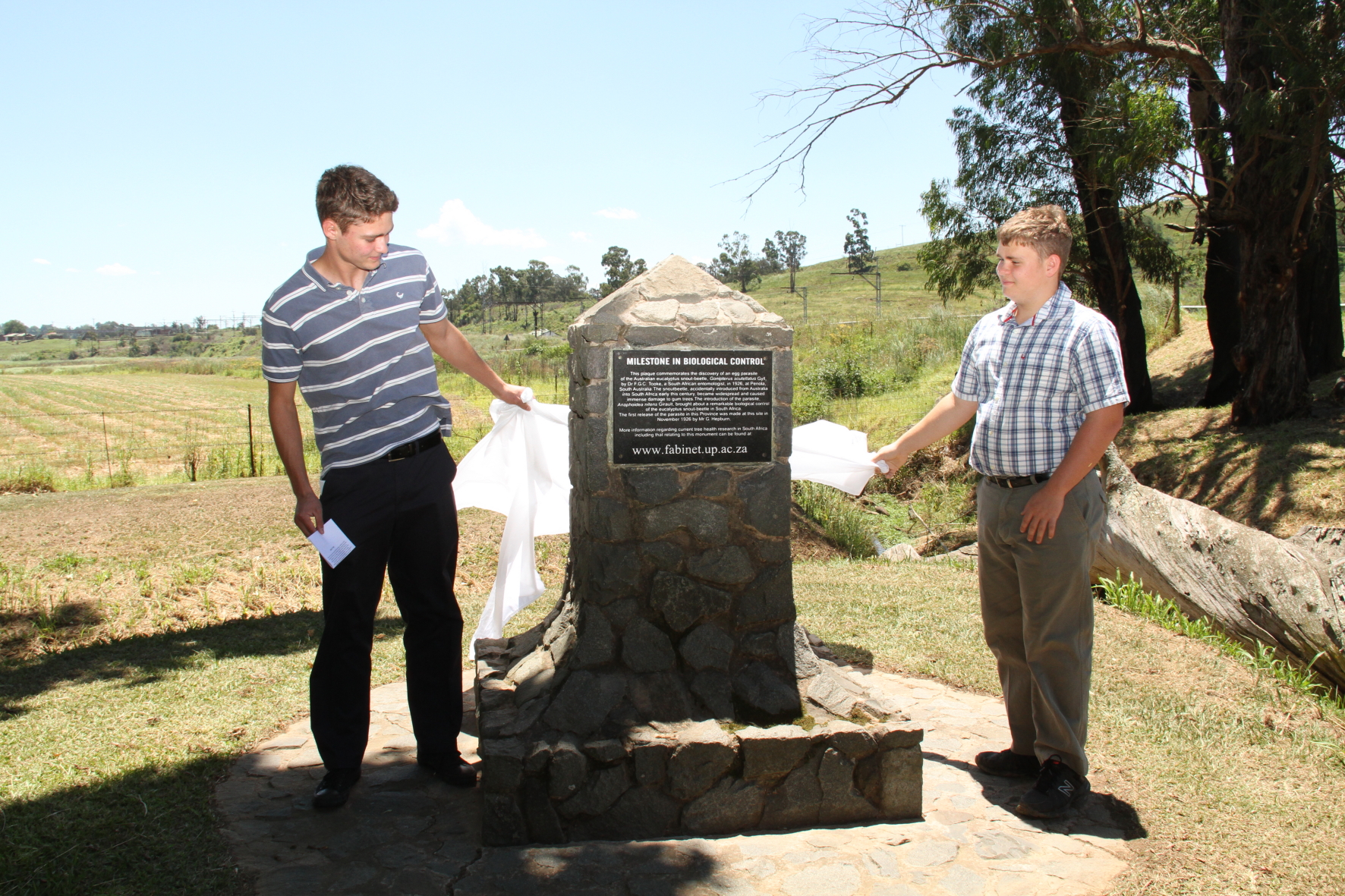 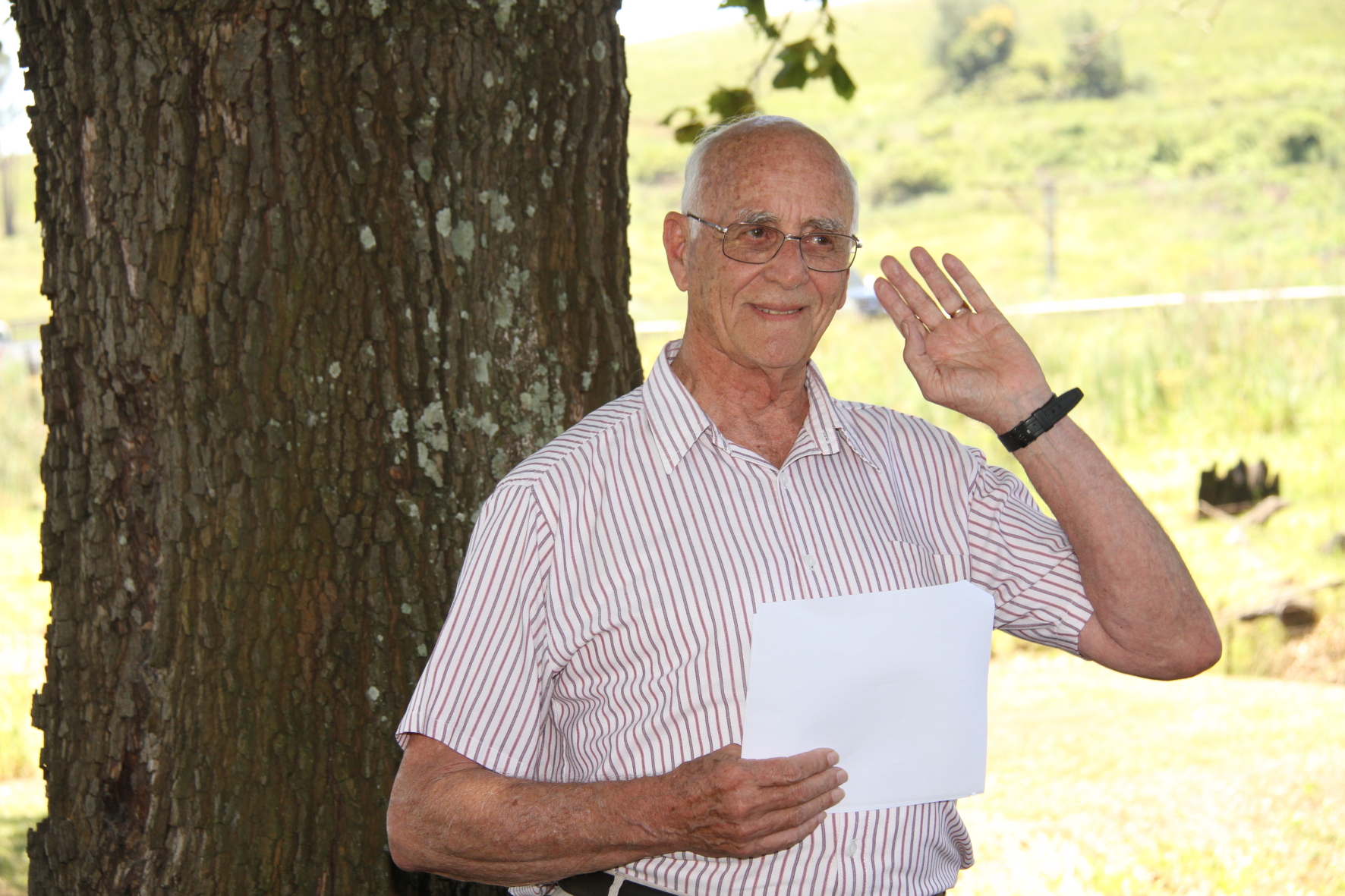 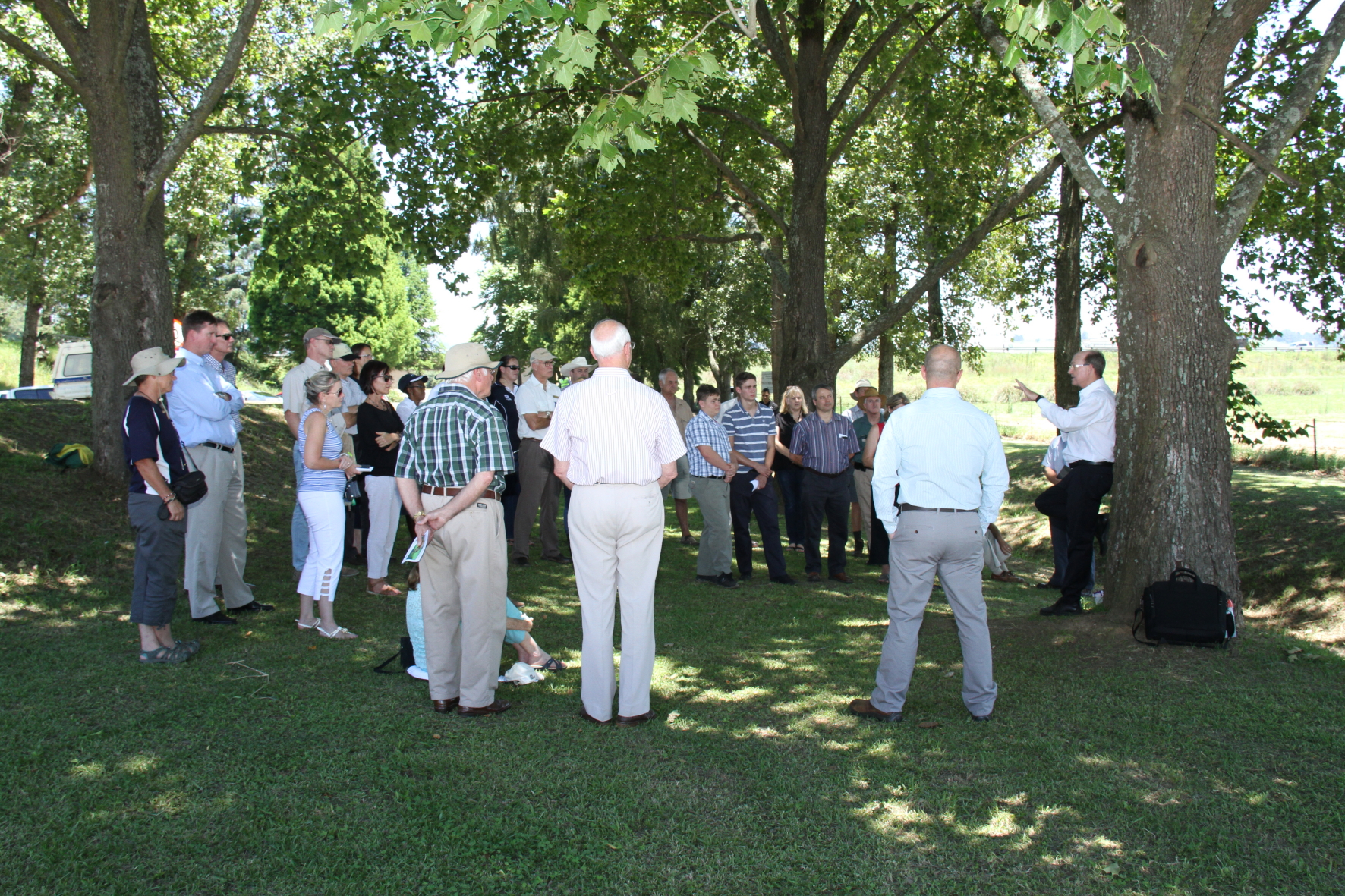 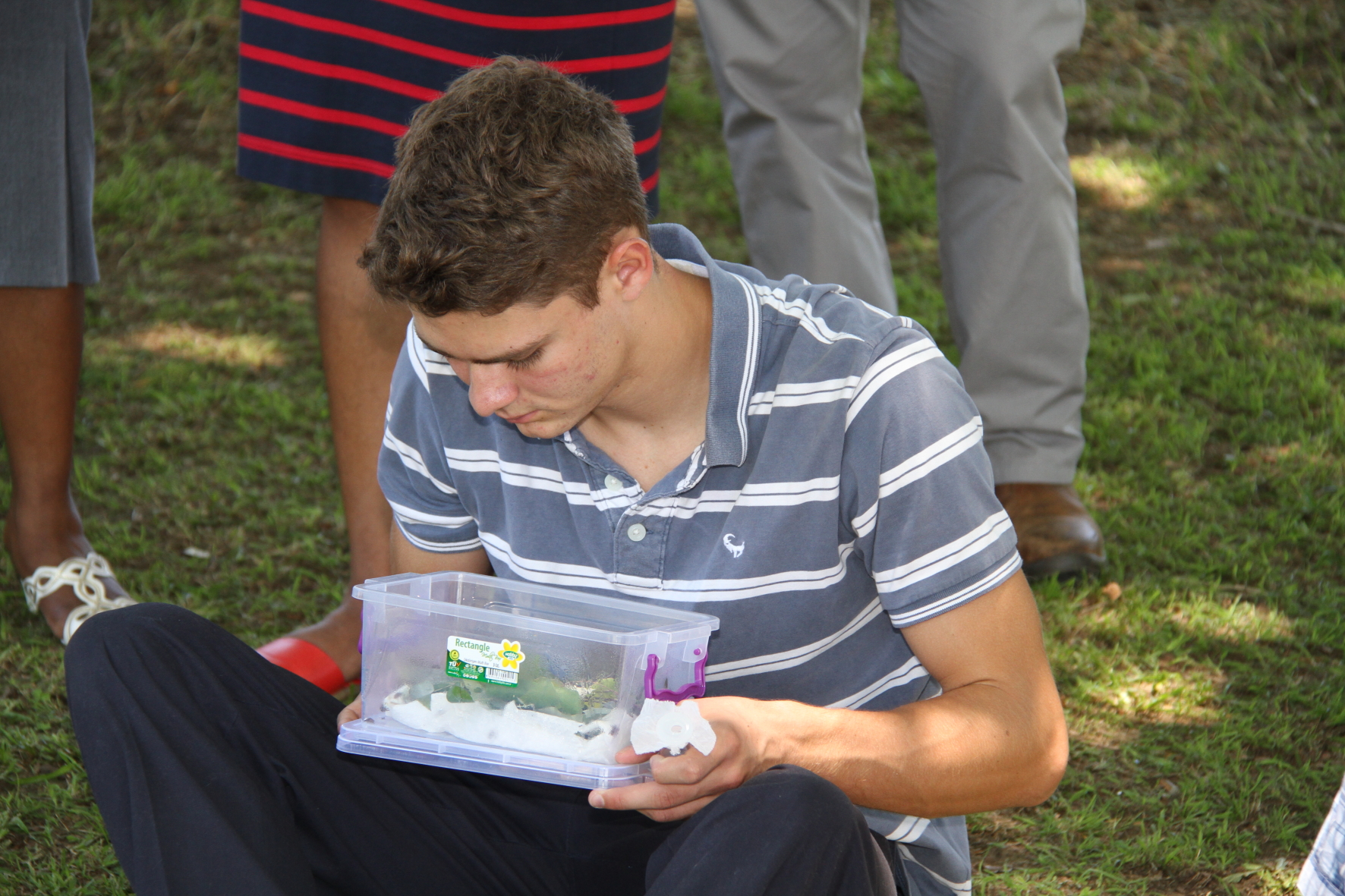 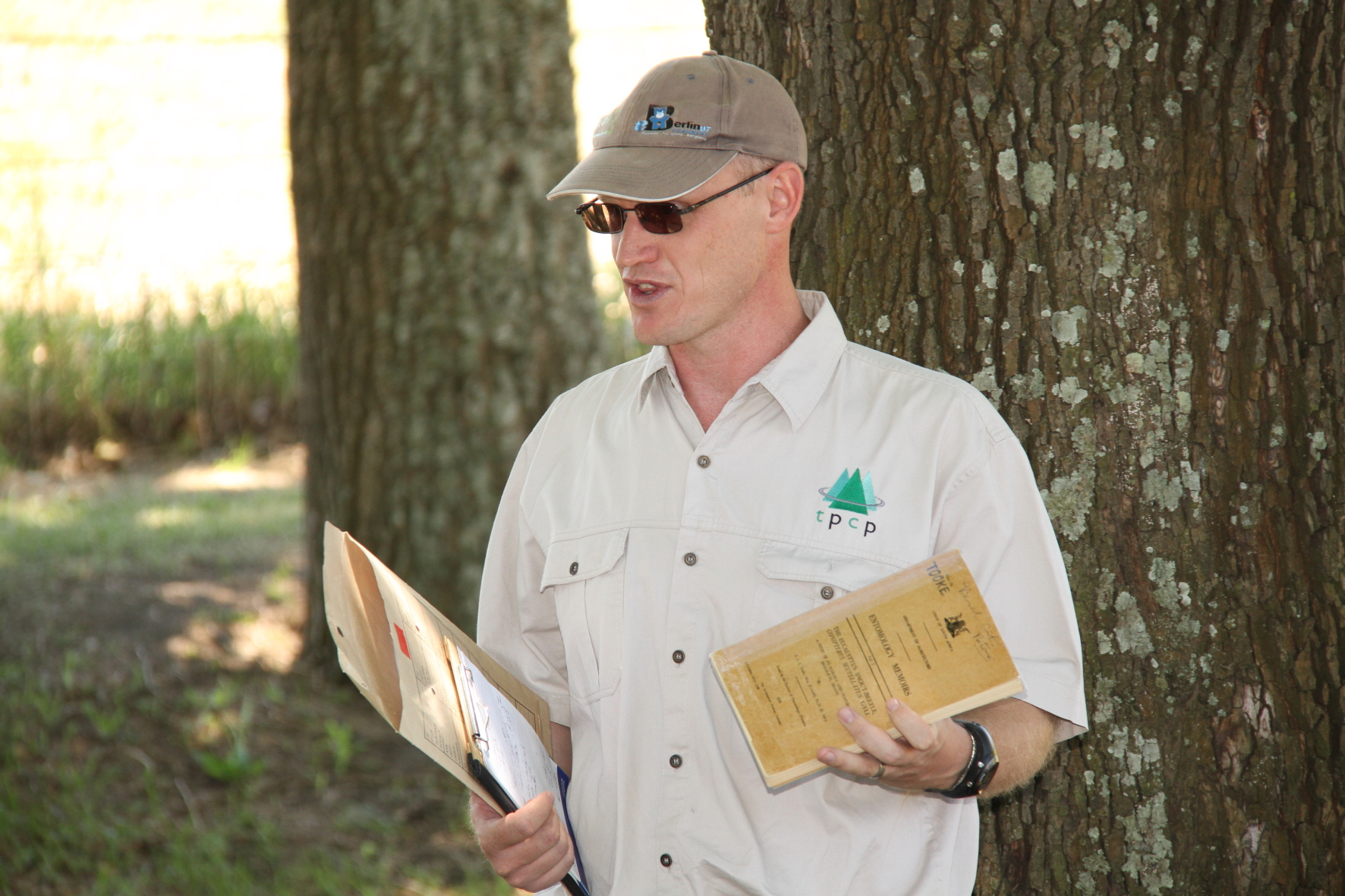 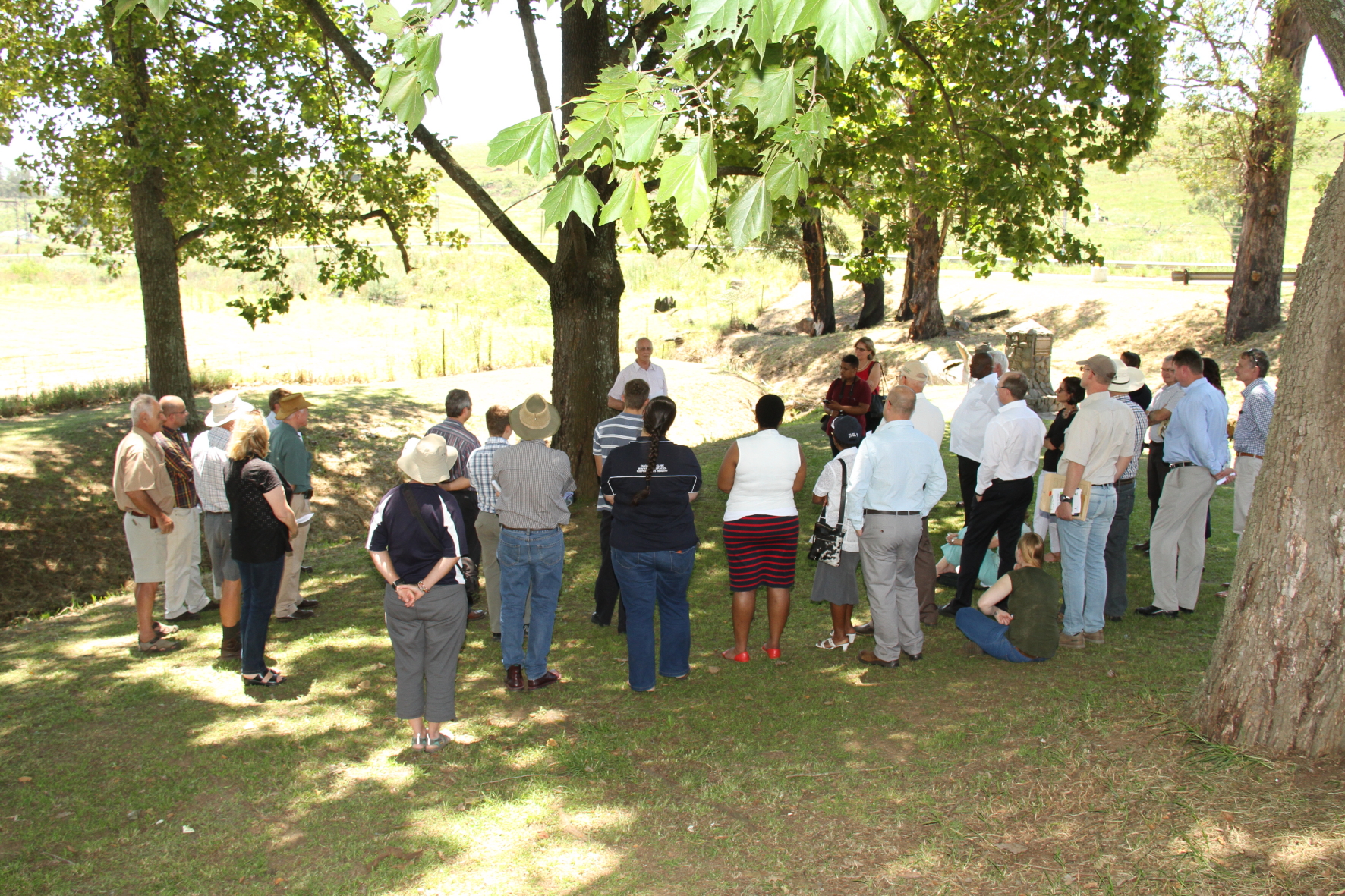 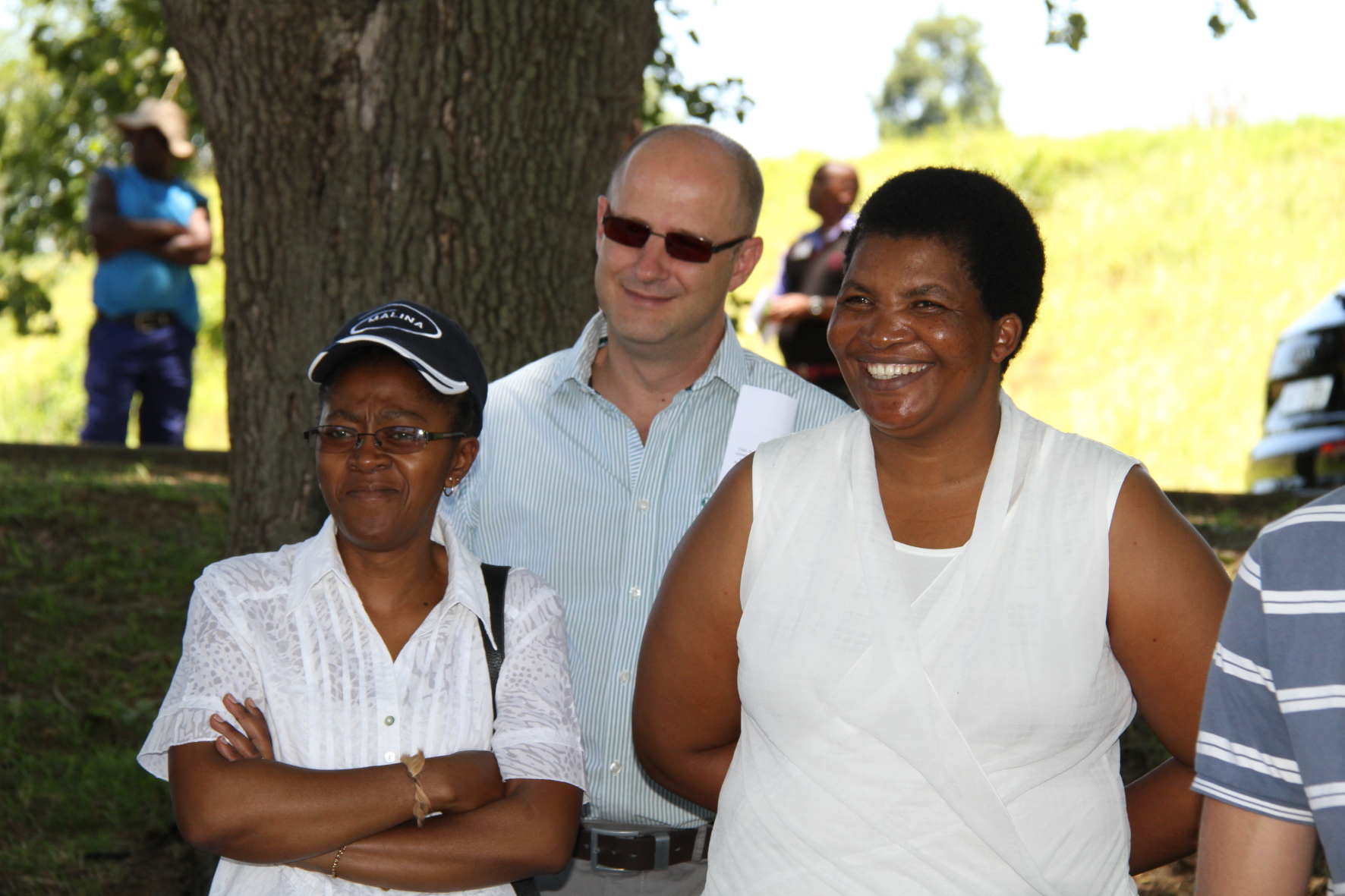 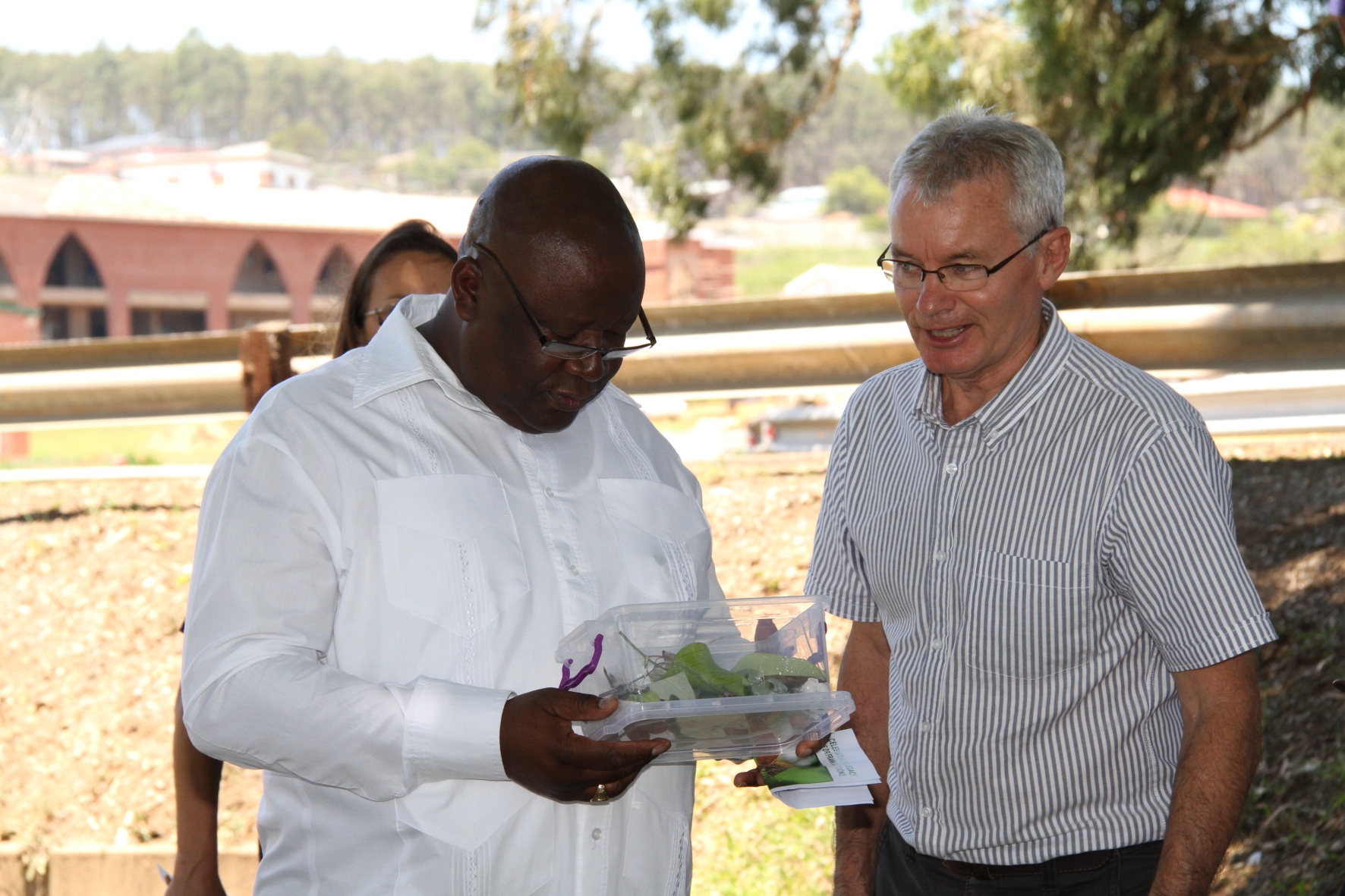 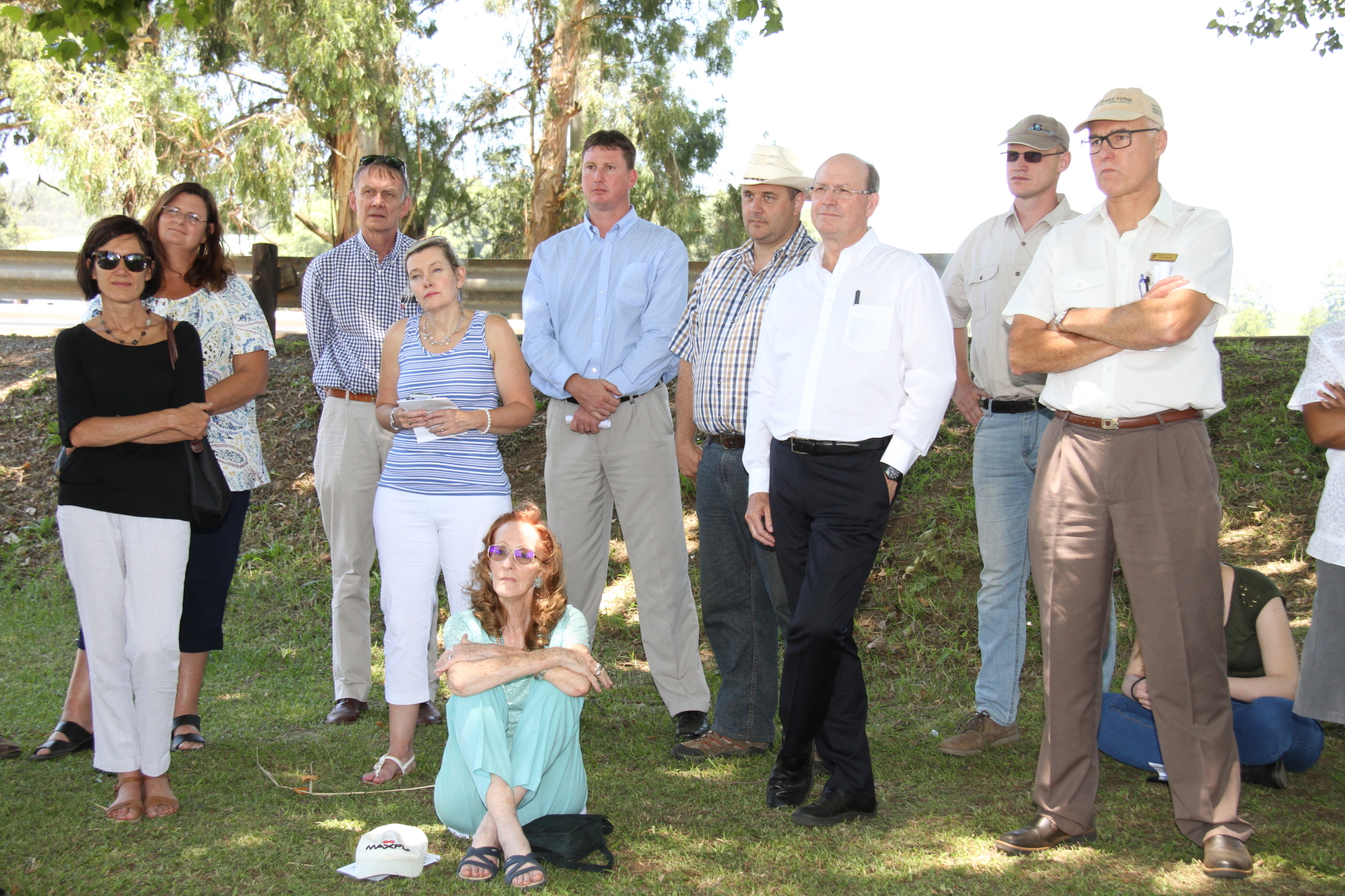 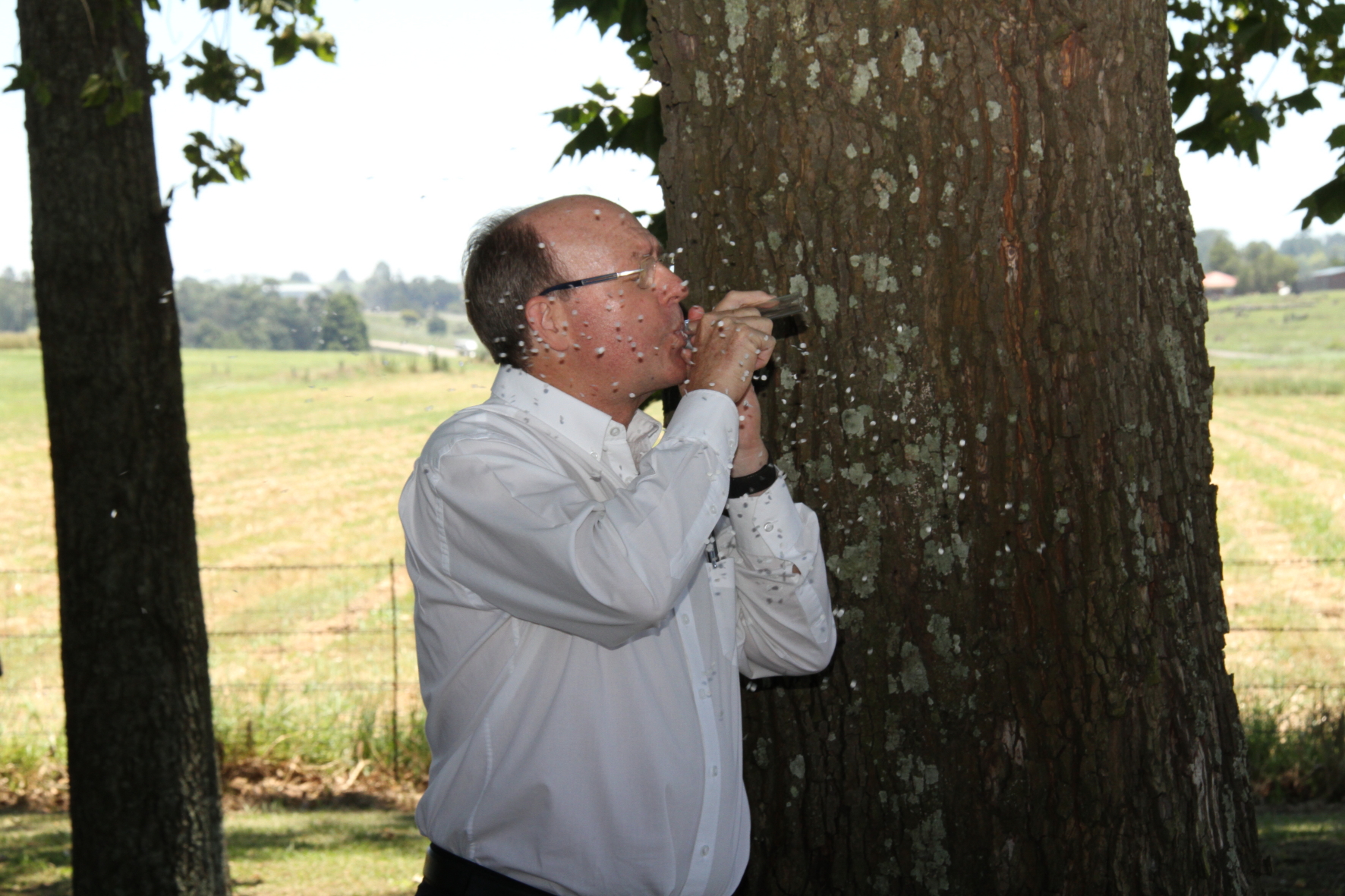 An unusual but important granite monument has stood steadfastly under a grove of magnificent plane trees near the entrance to Cedara Agricultural College for almost 20 years.  This monument honours groundbreaking research on a major forestry pest that was undertaken in the early 1900s.  More specifically, it honours the visionary and pioneering work of the South African entomologist Dr. Frank Tooke who discovered and released a biological control agent for an insect pest that was devastating Eucalyptus trees in South Africa.  Over the years, this monument has become degraded and a ceremony was held on the 19th January to unveil a refurbished monument.

The renovated Tooke monument was unveiled at a small ceremony attended by three generations of the Tooke family, FABI researchers and guests from Government, the South African forestry industry and associations. FABI sponsored the replacement of the plaque on the monument. This monument serves to retain this important South African historical record and also to continue to honour the pioneering work of Dr. Frank Tooke.

Addressing the guests, Dr. John Tooke, the son of Dr Frank Tooke, spoke of the challenges his father, a Government-appointed forest entomologist, faced in travelling to Australia to find a biological control agent for the devastating Eucalyptus pest Gonipterus scutellatus. His journey to Australia by ship lasted two months and he had to have his food supplies dropped by aircraft while in the field. He even developed scurvy while in the field and once was so thirsty for lack of water that he, in desperation, drank a tin of syrup. But his perseverance paid off and his ground-breaking work and discovery of the egg parasitoid Anaphes nitens Girault has formed the basis for the continued research into the use of biocontrol agents to counter the devastating impact of pests on the forestry and agricultural industries.

In his speech, FABI Director, Prof. Mike Wingfield noted that “insect pests are devastating forest plantations in South Africa, damaging the local economy opportunities to promote job creation. Biological control is one of the most effective means to negate the negative impact of these pests and the pioneering work of Frank Tooke should not be forgotten”.

Prof. Wingfield recalled the event where the monument was first unveiled in 1975. He told the group how Dr. Graeme Hepburn had told the group attending that ceremony how he had released the biological control agent in 1926.  And, rather than blowing these little insects out of a glass tube, he replayed that action using a glass tube containing white confetti. Mike Wingfield attempted the same action but with a sudden gust of wind blowing in his direction, found himself covered in white confetti!