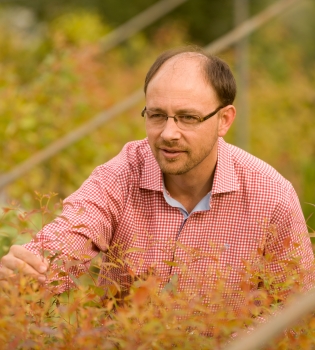 The staff and students of FABI wish to congratulate Prof. Bernard Slippers who has been appointed as the new Director of FABI with effect from 1 January 2018. Prof. Slippers takes over the leadership role from founding FABI Director Prof. Mike Wingfield who has been at the helm of the Institute for the past 20 years.

Bernard has a long association with FABI having competed his PhD at the institute in 2003. This was followed by a two-year post-doctoral study at the Swedish University of Agricultural Sciences (SLU) after which he returned to FABI in a contractual position. He was appointed as a full time staff member of the University of Pretoria in FABI in 2006 and currently has a linked appointment as Professor in the Department of Genetics.

He is passionate about science and the development and guidance of young scientists and boasts an extensive professional CV. He holds a B1 rating from the National Research Foundation (NRF) and has published more than 200 papers including in high-profile journals such as Science, Trends in Ecology and Evolution and Trends in Plant Science. He has authored and edited a book and numerous chapters in books and supervised several Postdoctoral researchers and more than 50 MSc and PhD students.

Bernard is a founding member of the Global Young Academy (GYA) and the South African Young Academy of Science (SAYAS). He has served in the leadership of both these organisations, including as co-chair of the GYA. Bernard was also a Young Affiliate of Academy of Science of the Developing World (TWAS) and is a member of the Academy of Science of South Africa (ASSAf). He leads the development of the Future Africa Institute at UP, aimed at developing excellence in trans-disciplinary science leadership for innovation in Africa, as well as the associated Africa Science Leadership Programme.

Bernard and his wife, Dr Jana Slippers, are Heads of Residence of TuksVillage, where they live with their daughters Yvonne and Mia.