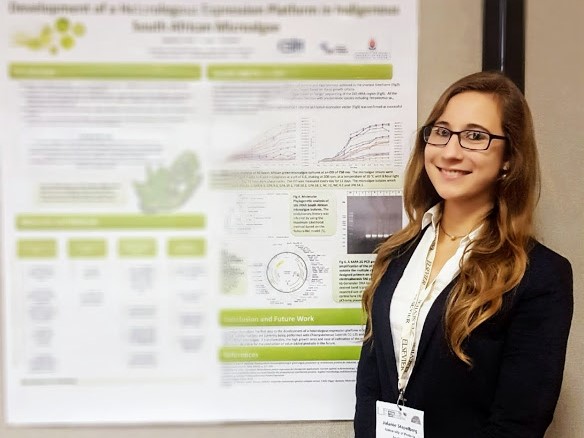 FABI MSc student Julanie Stapelberg, attended the 8th International Conference on Algal Biomass, Biofuels and Bioproducts in Seattle, USA from 11-13 June. The conference, attended by delegates from 39 countries across the globe, was a beautiful merge of the latest scientific research and industrial projects showcasing a diversity of programs worldwide. Currently America focuses on the commercial biofuel production, South Korea is hard at work with genetically modifying lipids to increase the biofuel production. Australia emphasises bio-remediation of wastewater treatment, Canada on the production of recombinant proteins from algae and Europe a combination of everything. Julanie presented her poster on the “development of an heterologous expression platform in indigenous South African algae.”

Julanie say that although she knew microalgae was important but her eyes were opened at the future it has. “That green stuff in your pond has more potential than you’d ever realise!” In short, the production of algae has the potential to transform things that we currently think of as liabilities into valuable assets. Algae can capture carbon from the atmosphere, reducing greenhouse gas emissions. Wastewater can be bio-remediated by removing nitrogen, phosphorous and reducing pathogens. Then the algal biomass has huge commercial bonus for large-scale low-cost production of biofuel. Algae can potentially replace petroleum by algal-derived renewable energy biofuel production including diesel, butanol, biomethane and jet fuel propellant. The algal biomass can also be used as nutritional feed for animals and even humans (the green smoothie from Kauai is algae my friend!), as an expression vector for therapeutic recombinant proteins, algal by-products for cosmeceuticals, pharmaceuticals and even its cellulose can be used for plastics and paper.

After greenhouse gas emissions are reduced and polluted water is treated, the algae products themselves are extremely beneficial. Julanie is convinced that with more and more global efforts to go green, perhaps microalgae is necessary for our future.