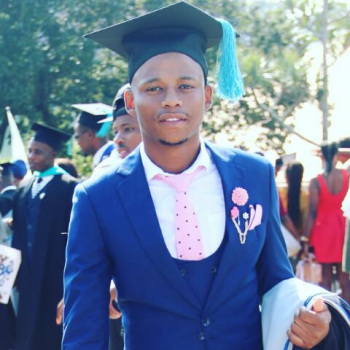 I am currently doing a PhD in Genetics in the Department of Biochemistry, Genetics and Microbiology at University of Pretoria (UP) under Forestry and Agricultural Biotechnology Institute (FABI). My research project focuses of Functional characterization of ERG3 and ERG5 genes in ergosterol biosynthesis route in Fusarium circinatum and azole resistance. Pine pitch canker is one of the most devastating forest diseases worldwide and is caused by F. circinatum. This fungus causes growth reduction, wilting, and root disease in pine seedlings and the development of cankers in pine forests and plantations are associated with significant quality and yield losses. In the seedling nursery setting, management of the fungus often involves the use of fungicides, but the pathogen's resistance to most of these chemicals has not been widely investigated. This is an important knowledge gap, given the rapid and widespread evolution of fungicide resistance in many agricultural ecosystems. The aim of this study is to examine the sensitivity of South African populations of F. circinatum to tebuconazole and imazalil which are sterol biosynthesis inhibitors, as well as  to investigate the role of ERG3 and ERG5 in ergosterol biosynthesis in F. circinatum. The above aim will be achieve through the following objectives, (1) In vitro efficacy determination of tebuconazole and imazalil against F. circinatum mycelial growth, (2) Generation of ERG3 and ERG5 knockouts and complement F. circinatum mutants (3)
Phenotypic characterization of F circinatum mutants, (4) Evaluating the virulence and
growth of mutants.