Collaborator at UP: Dr Sanushka Naidoo

The aim of the project is to understand the molecular mechanisms of plant responses to the bacterial wilt pathogen, Ralstonia solanacearum. This project is based on the model plant, Arabidopsis thaliana (mustard cress), which is known to have a range of "ecotypes" from different parts of the world. These natural variants show phenotypic differences that have a genetic basis. This was exploited in this project, wherein ecotypes were screened for resistance and susceptibility to African isolates of the bacterial pathogen, Ralstonia. Resistant and susceptible ecotypes were identified (Joanne Weich, MSc dissertation, 2004). 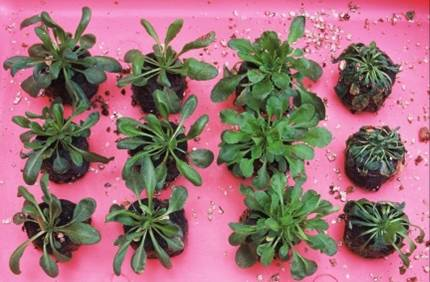 Detailed genetic, molecular and phenotypic analysis of the pathosystem has revealed an interesting case of gene-for-gene tolerance conferred by an allele of the RRS1 gene in ecotype A, which does not exhibit symptoms but harbours high numbers of the bacterial pathogen (Van der Linden et al, 2013).

Whole genome and custom Arabidopsis microarrays from SSH libraries, constructed at the ACGT Microarray Facility have been used for expression profiling of Arabidopsis plants after infection by the bacterium in a susceptible interaction (Naidoo, et al 2011). Whole genome expression profiling is also underway to explore the tolerant response. This is greatly facilitated by the availability of the Arabidopsis genome sequence and associated bioinformatics resources.