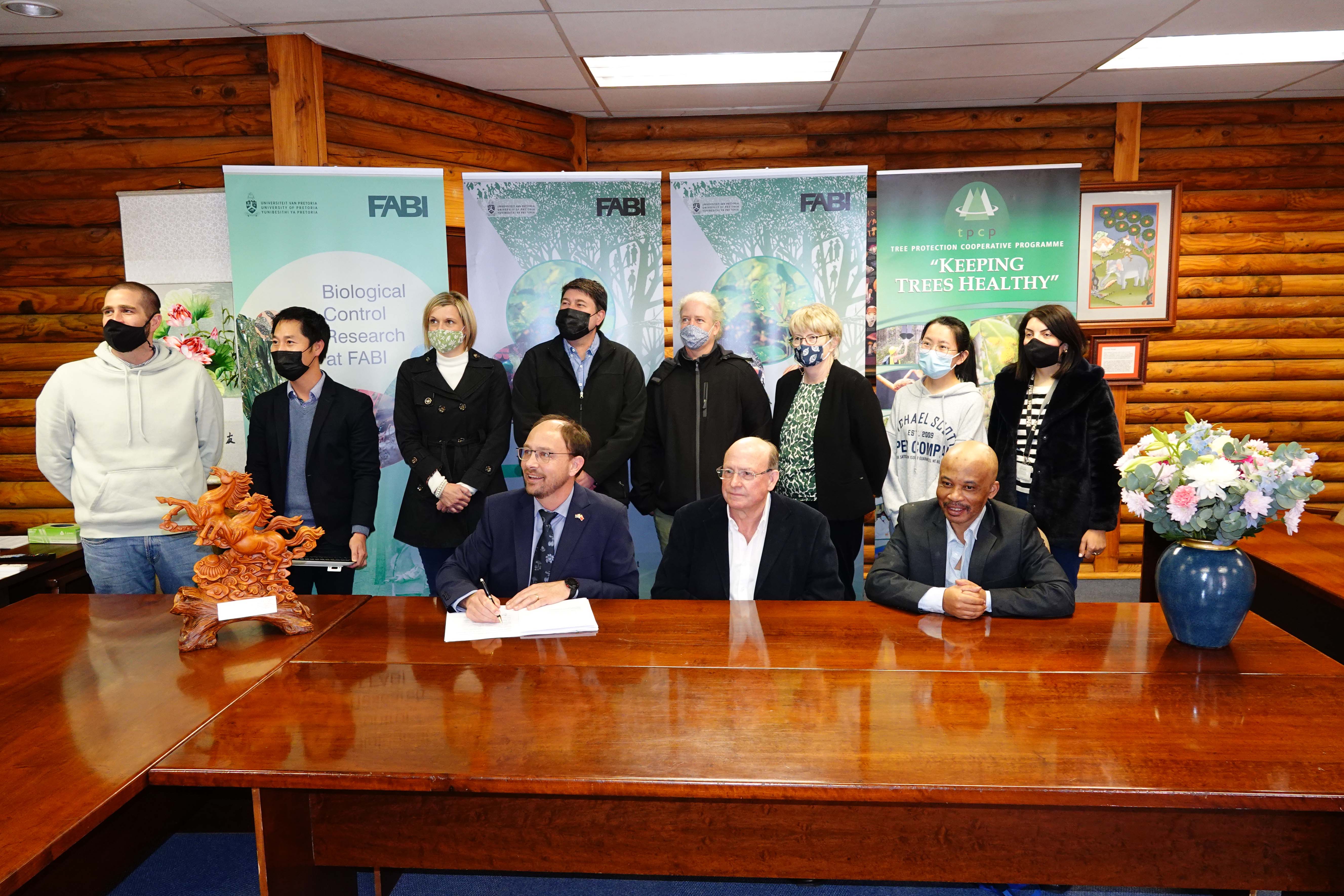 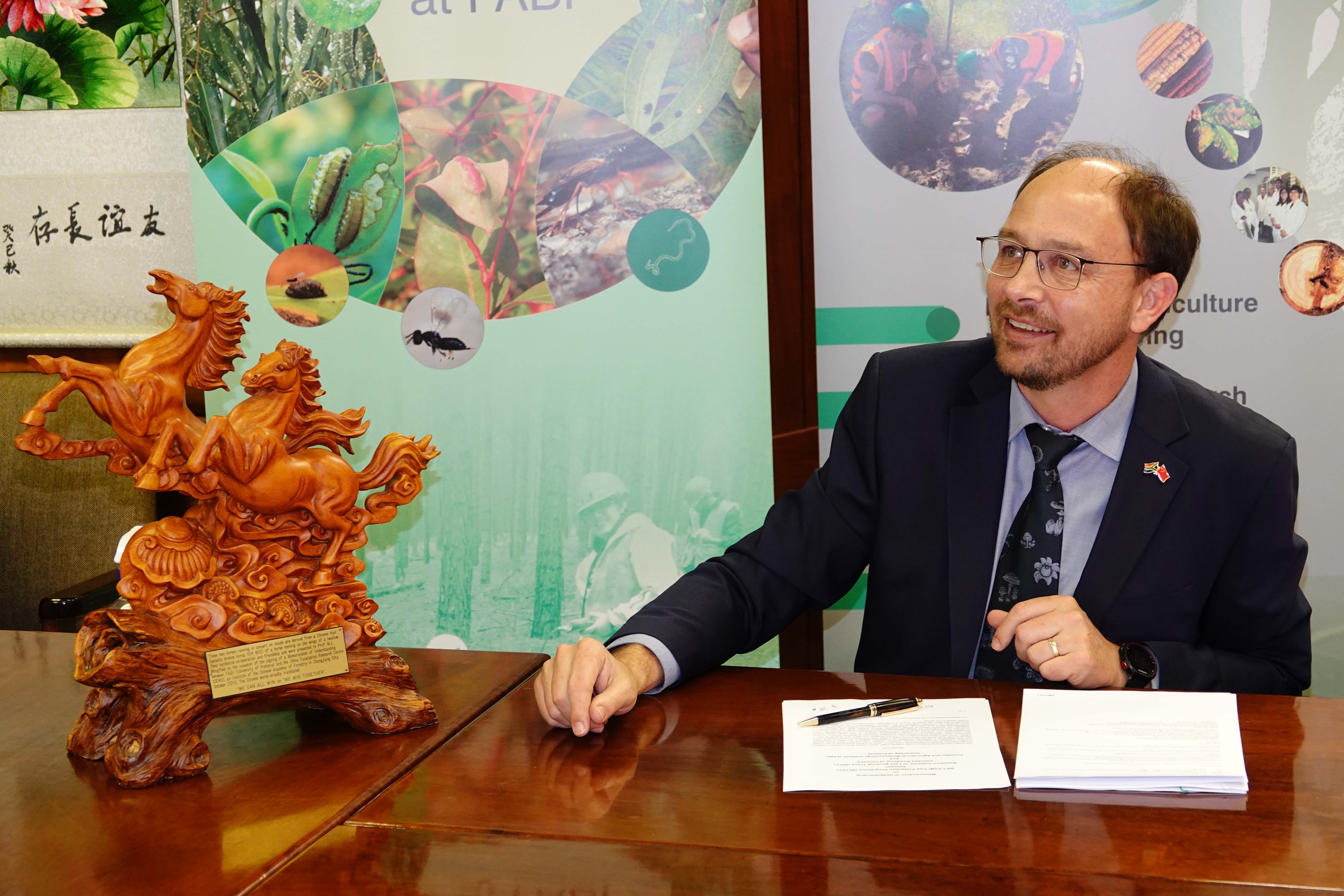 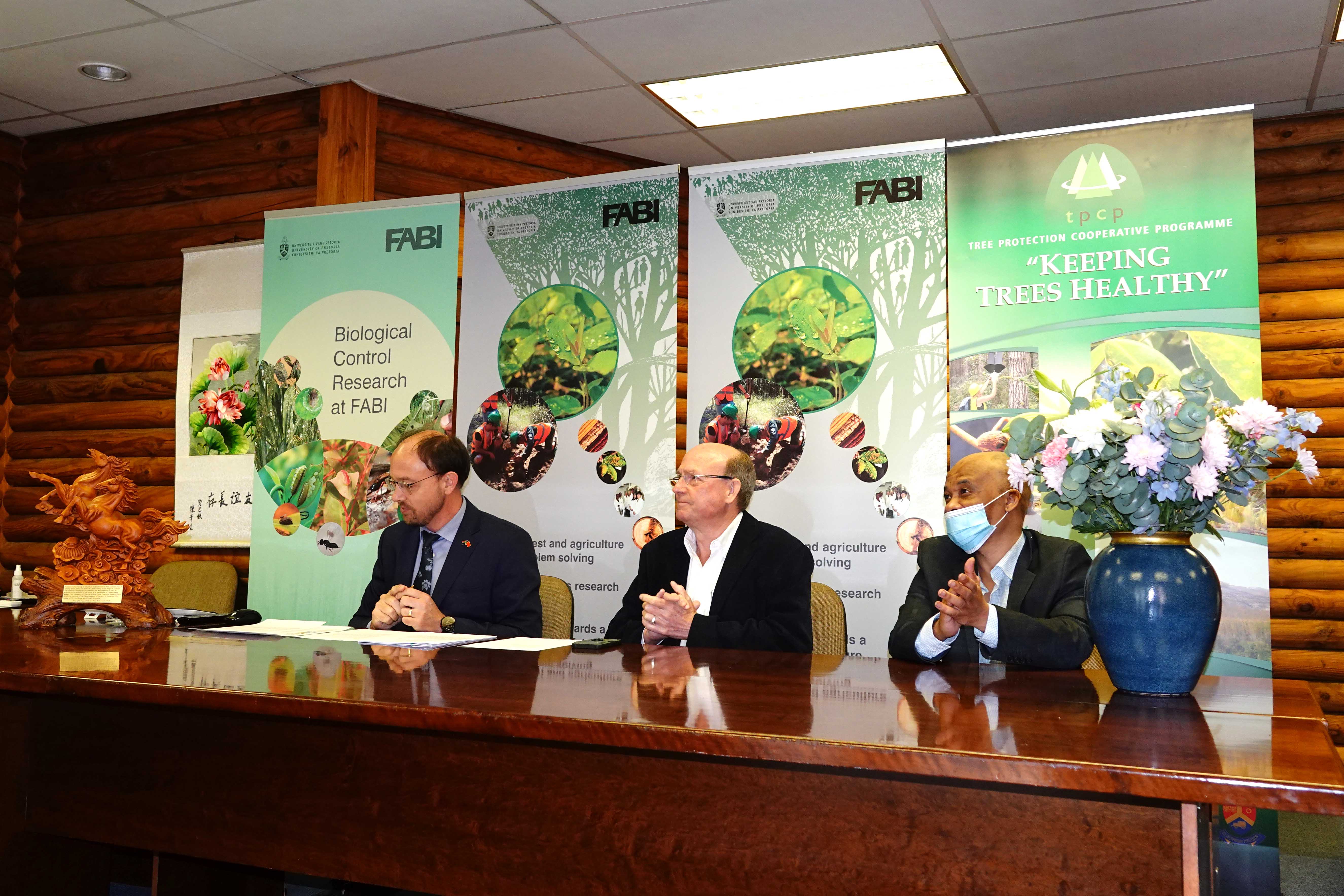 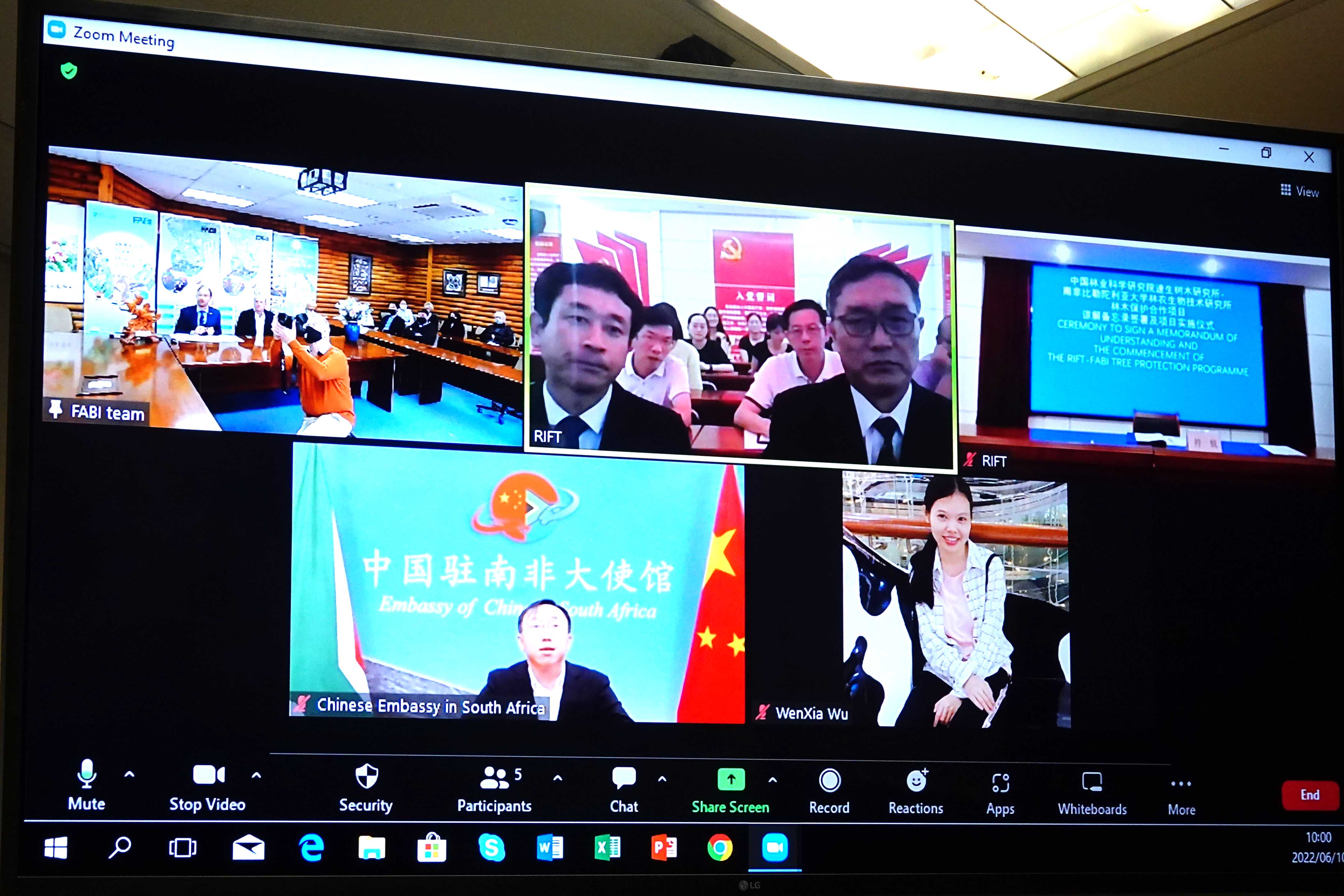 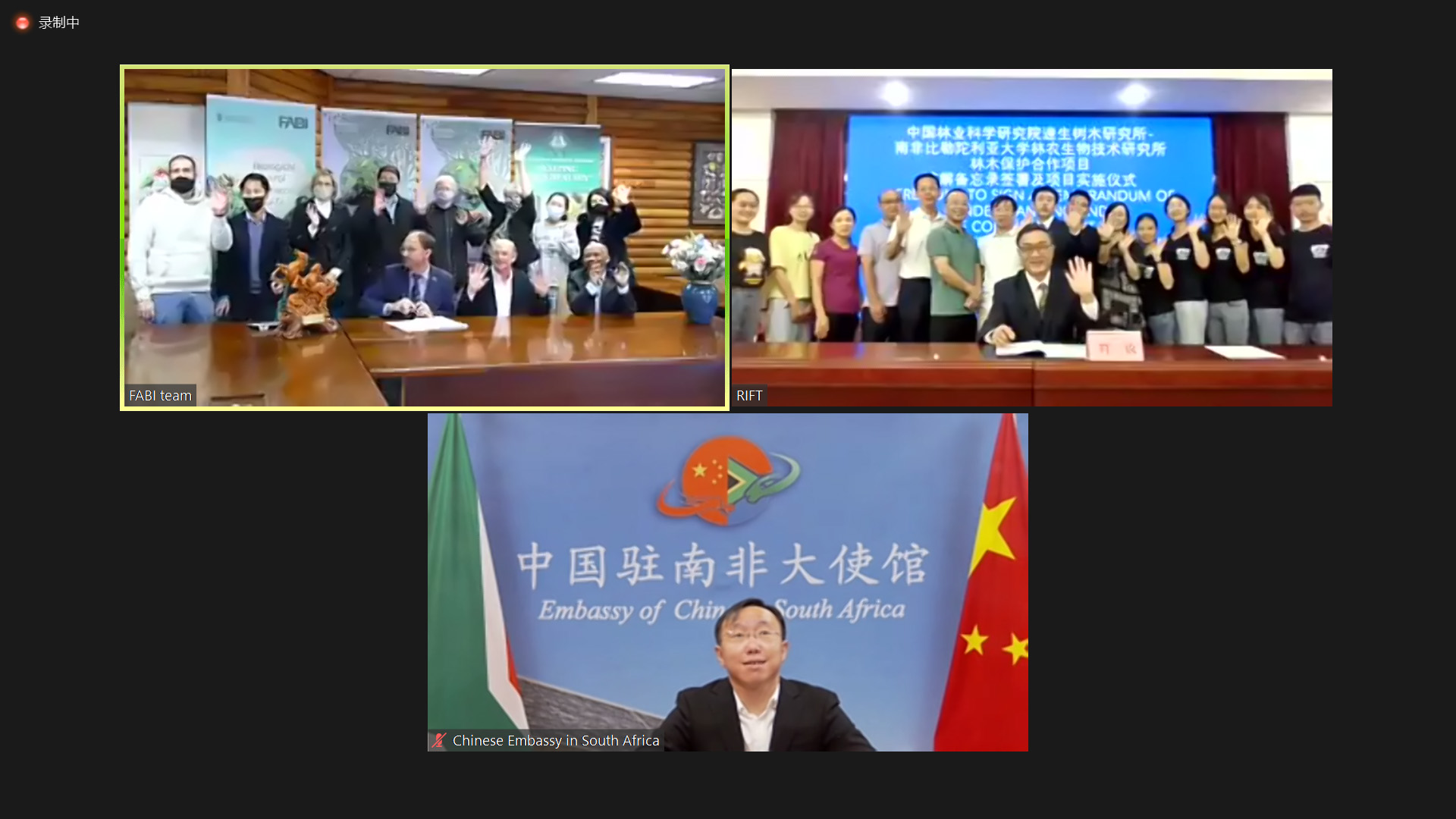 FABI celebrated a 17-year partnership with the Chinese Academy of Forestry’s Research Institute of Fast Growing Trees (RIFT) at a virtual signing of a new five-year Memorandum of Understanding on 10 June. This ceremony was attended by Dr Yu Pang of the Embassy of the People's Republic of China in South Africa, Duke Seloane Nkadimeng, Deputy Director: Bilateral Relations, Department of Science and Innovation, members of the FABI Management Committee and several representatives from RIFT in China.

FABI Director Prof. Bernard Slippers said the collaboration marked a long friendship that continues to grow stronger and that he was delighted with the  further strengthening of the relationship in forestry research between China and South Africa. Mr Rui Fu, Director of RIFT said that he was glad to sign the MoU and thanked all team members for their hard work and co-operation that has made the programme a success.

This partnership was started in 2005. In the following year FABI and the China Eucalypt Research Centre (CERC, which was a direct subordinate of the Chinese Academy of Forestry and renamed as RIFT in November 2021) established the CERC-FABI Eucalyptus Protection Programme (CFEPP).

In 2015, this relationship was extended to include collaborative research on tree health issues beyond Eucalyptus and re-named as the CERC-FABI Tree Protection Programme (CFTPP). This strengthened the already established research linkages in fields of shared interest and expertise. The Memorandum of Understanding (MoU) upon which that collaboration was formalized has expired and this new agreement provides the necessary extension of the research collaboration. The activities undertaken pursuant to this MoU are based on a spirit of co-operation and reciprocity that is intended to be of mutual benefit to both parties.

In closing, Prof Slippers said that he looks forward to continue to work closely with Chinese colleagues to keep fast growing plantation trees healthy in both South Africa and China. The program provides a foundation that is ready for future growth. The teams expect the signing of a contract for the next phase of the development of a Joint Research Centre in Forestry in the coming months.