Attending an international congress: perspectives from a FABI postdoc 2016-10-17 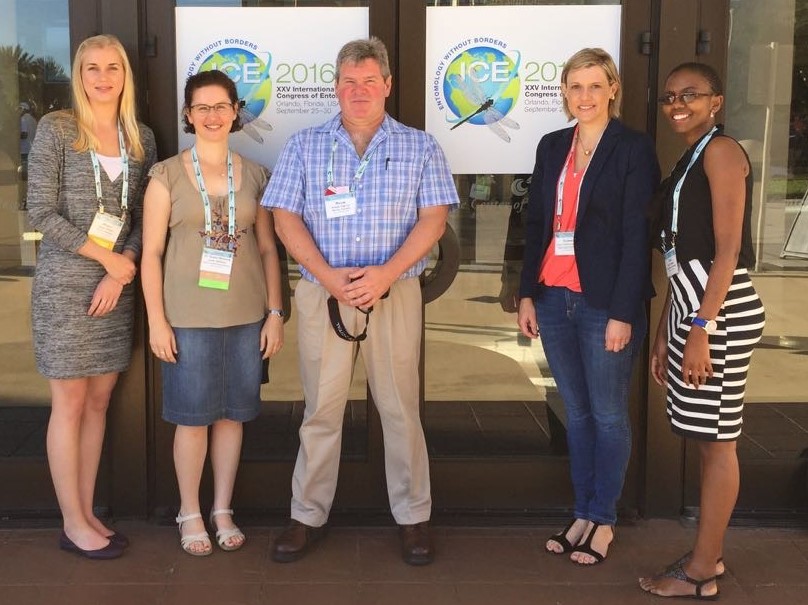 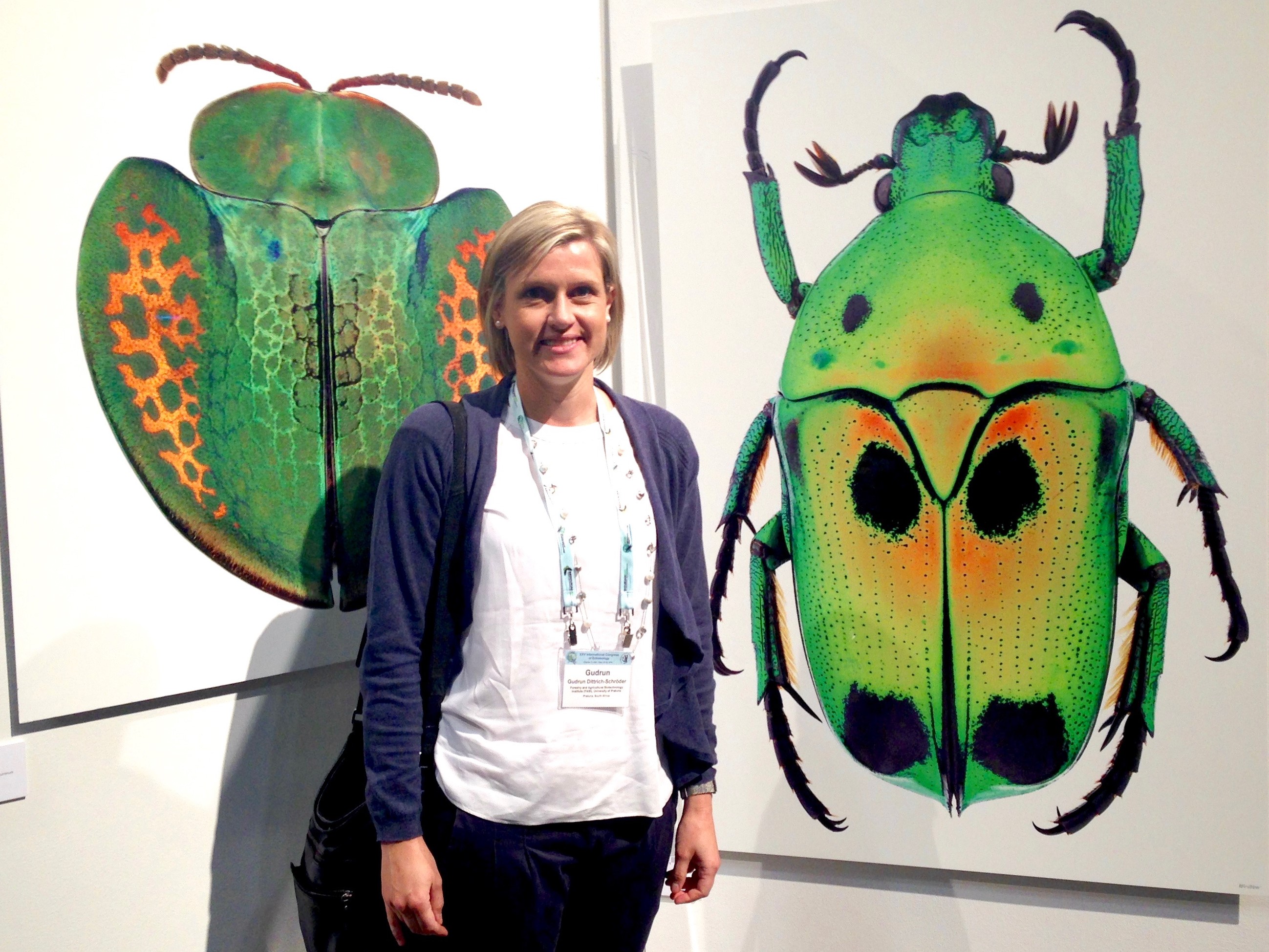 “The XXV International Congress of Entomology in Orlando, Florida, held from 25th to 30th September 2016, was the largest entomology congress to date with over 6500 participants from 102 countries and over 4500 talks. Each day the congress commenced with a plenary session. This was given by well-known scientists, entomologists and Nobel laureates on a currently important topic or highlighting a field of research where great progress has been made.

Besides being very interesting, the plenary presentation by Dr. Carolina Barillas–Mury, also highlighted the importance of determination and persistence in research. Much research has already been conducted regarding malaria control. Her work focuses on understanding the specificity of the malaria parasite in mosquitoes. She has been working in this field for many years and only within the last few months “solved a puzzle” she has been trying to understand for a very long time. Her talk also highlighted the importance of challenging the already “accepted facts” and constantly questioning what we know and the importance of approaching the answering of a question from many different angles.

The focus of my postdoctoral research is to understand the invasion pathways as well as reproductive system of the Eucalyptus gall-forming wasp Leptocybe invasa. The broader goal of this research is to be able to control this invasive pest. In order to do so a good understanding of its unique reproductive system needs to be gained.  This can be achieved by the use of molecular and bioinformatics method using the genome of this wasp, which has recently been sequenced. Having the genome we are interested in finding the sex determination genes and hoping to understand the rather unusual reproductive system of this wasp, where predominantly female offspring are produced clonally but occasionally male offspring are produced. We are also interested in determining the influence endosymbiotic bacteria have on the female biased population. Furthermore, we are interested in investigating whether it would be possible to use the CRISPR/Cas9 method to control L. invasa populations.

At ICE one of my goals was to obtain a good idea and overview of new trends in entomology and methods in the molecular field as well as their application to answering interesting and novel questions. The areas of interest directly related to my postdoctoral research therefore relate to genomics, gene editing and CRISPR/Cas9, bioinformatics and work related to endosymbionts and the role they play in influencing reproductive success of invasive populations and skewing the ratio of male to females in populations.

I attended talks by other entomologists who are using similar techniques/conducting analyses using the same software suites to understand invasion pathways of organisms and to delineate populations. This was useful in order to compare the research I am doing to what is being conducted in other parts of the world especially in first world countries. These opportunities also allow one a realistic comparison of the quality of research one is conducting. I found it valuable to look at the posters displayed in the exhibition hall, which are ideal in terms of receiving an overview of a study, obtaining new ideas how to present research, and meeting new researchers.

As scientists our research has maximum impact if we communicate and engage effectively. This is important when one engages with various individuals, from the young learner to the politician. We can only teach and educate others about science and inspire others to pursue a career in science, if we can communicate well. Therefore it was important to me to attend talks on science communication to learn and obtain ideas on how to improve this. Having also recently started participating in scientific conversations on the social media platform, Twitter, I used the opportunity of attending a whole week of talks to tweet about interesting talks and also engage with fellow entomologists using Twitter.

A further important skill, related to effective communication and record keeping is photography of your study organism or study system. I attended a talk by well-known insect photographer Alex Wild on and how to improve photography skills using equipment, which can be made at home, or items already in most people’s homes.

I was also able to meet up with collaborators, researchers I have met at other conferences (e.g. researchers from Taiwan whom I have met at a previous conference on gall-forming wasps agreed to send me specimens of Leptocybe invasa), fellow entomologists from South Africa (who had also received funding for ICE from the Entomological Society of Southern Africa) whom I did not know before, researchers I had met during my masters studies, and during coffee breaks, other entomologists working in a totally different field to that of my research.

A selection of some of the talks I attended:

•Regulation and containment of gene drive systems in arthropods

•Population genetic structure of the spruce budworm (Choristoneura fumiferana) across North America: Are SNP markers valuable for the detection of migrants?

•Phylogeny and species delimitation of the spruce budworm group: A historical perspective

•Assessing parasitoid assemblages in agroecosystems: What do molecular approaches offer?

•Evolution of a science communicator: Promoting your work and career with social media

ICE has highlighted the importance of meeting distinguished scientists and learning from them; meeting other scientists and the potential for collaboration especially as a scientist working in a third world country where there are often limitations to what one can do; the importance of sharing ideas; the importance of attending conferences which help to keep you inspired; the importance of trying new things; the necessity to become comfortable with the many types of social media and use them to engage with others and market oneself; and to also take time to have fun in your research field.

In addition to attending the conference in Orlando, I used the opportunity of being in Florida to visit the Kennedy Space Centre and learn about developments and future plans relating to space travel and research. This was extremely interesting and an awe-inspiring experience.

I would like to thank the National Research Foundation as well as the Entomological Society of Southern Africa for this wonderfully inspiring opportunity and for making participation at ICE2016 possible!”

(2) Gudrun Dittrich-Schröder at some of the magnificant artworks on display during the meeting.