Collaborators, researchers and core team members of the CTHB celebrate the programme’s successes at its 14th annual meeting 2018-05-21 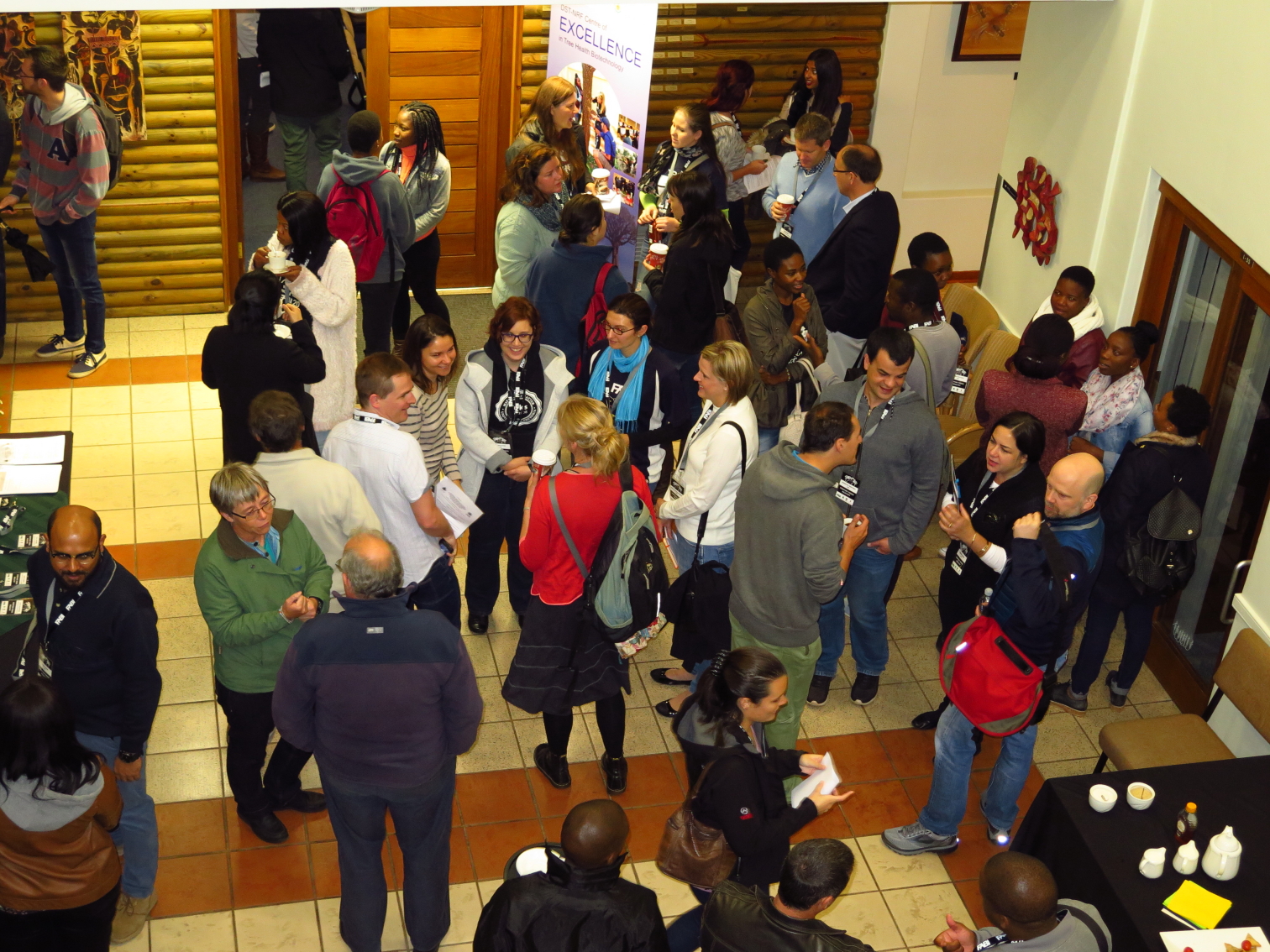 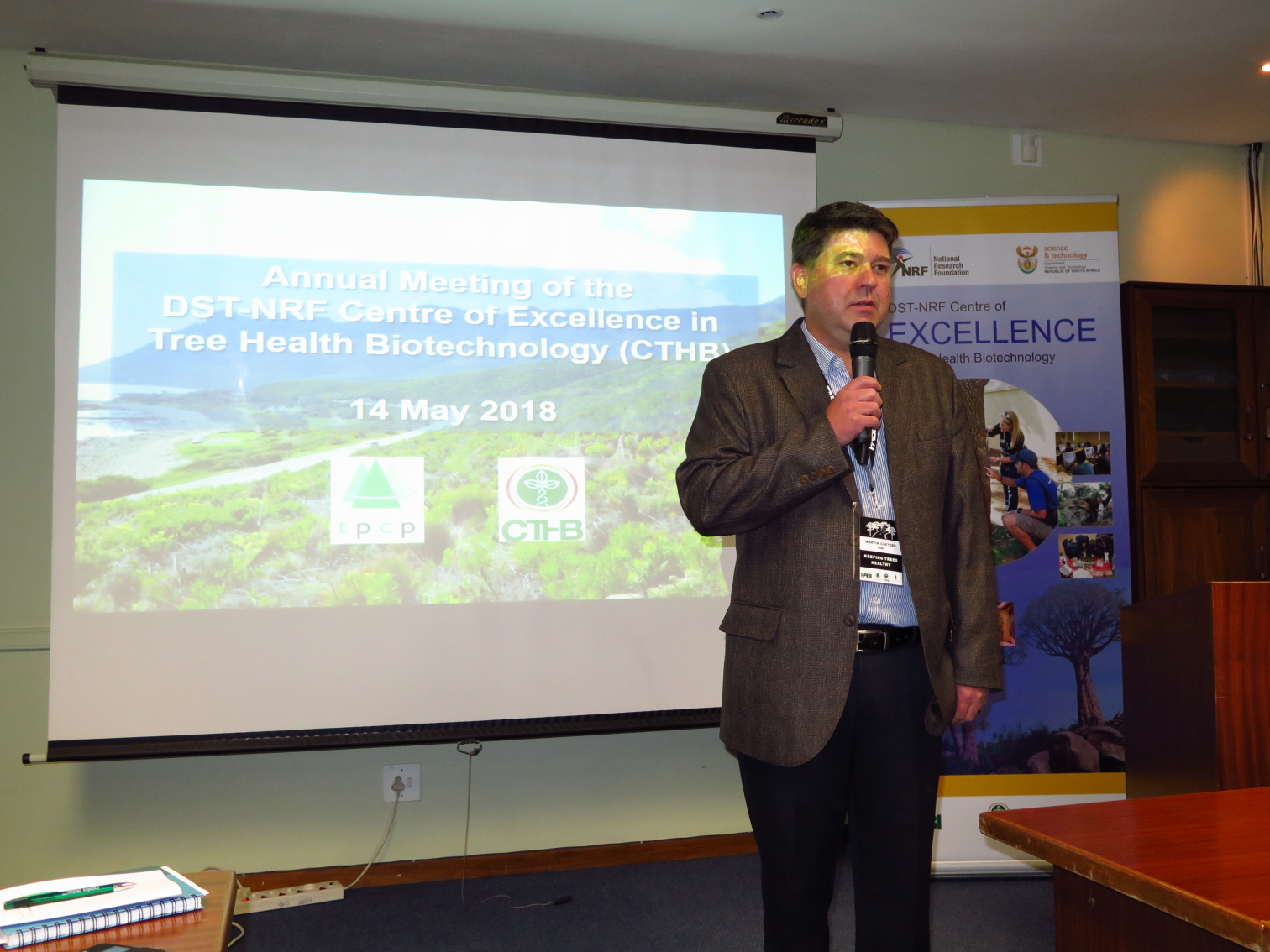 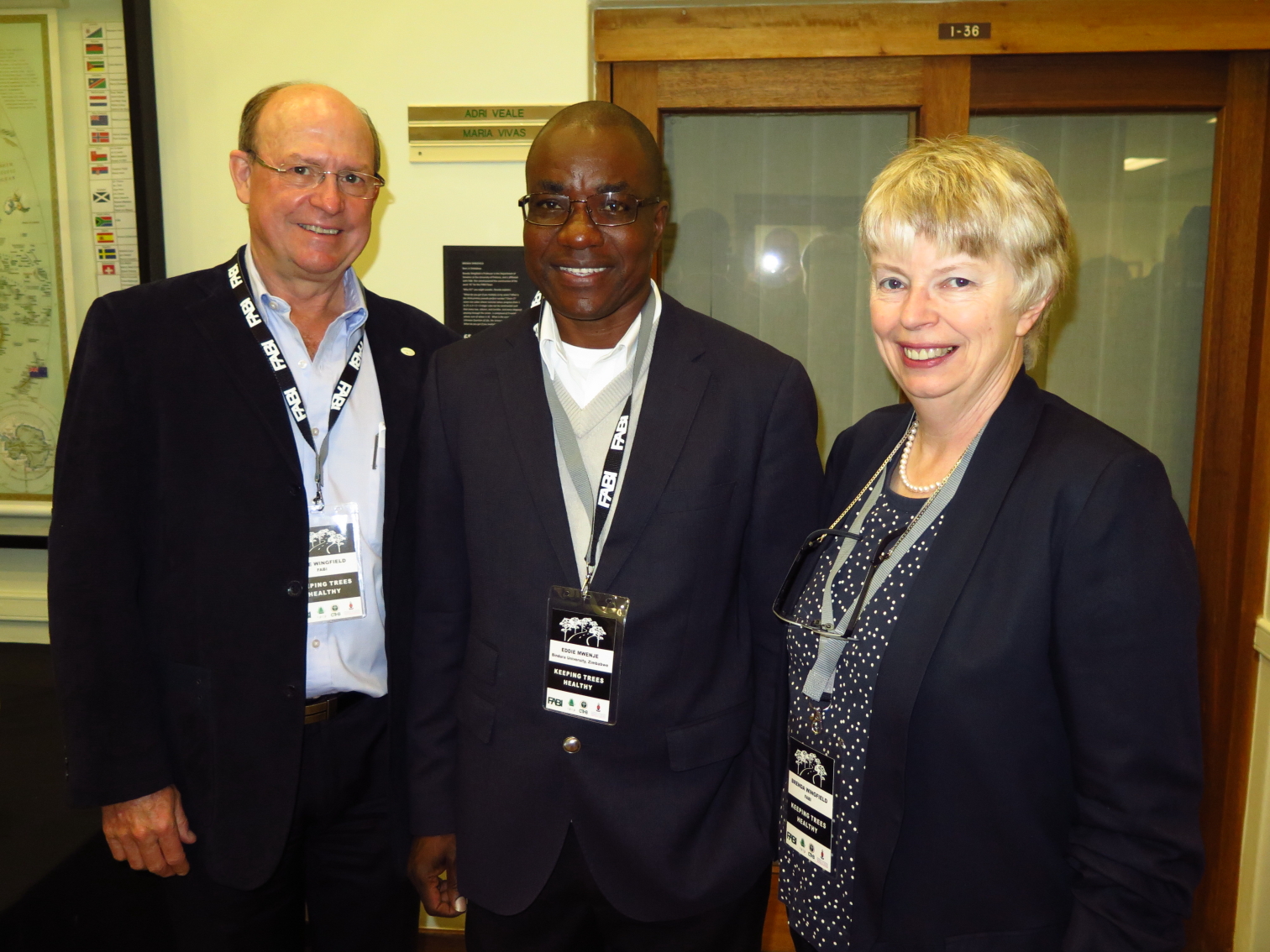 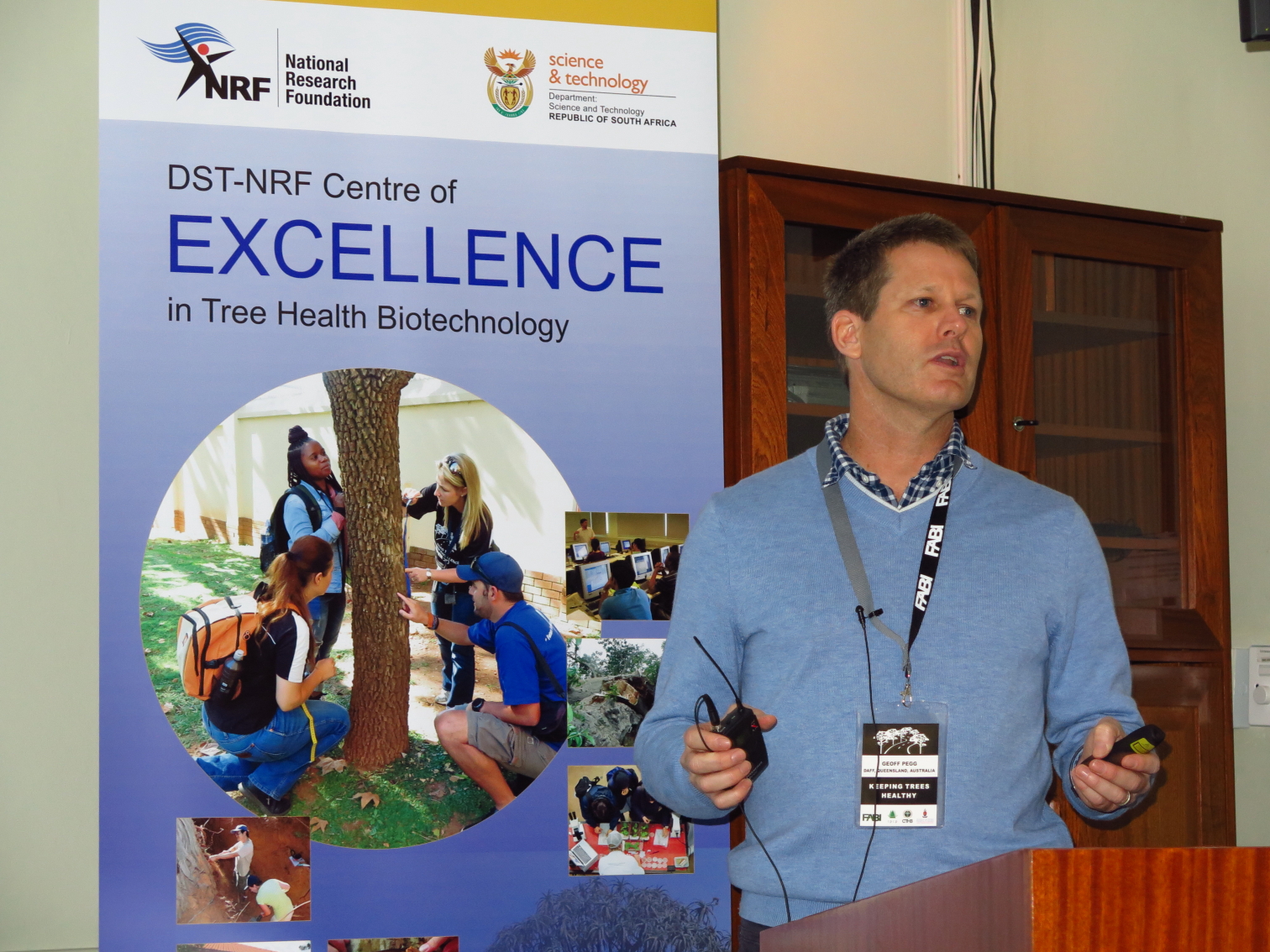 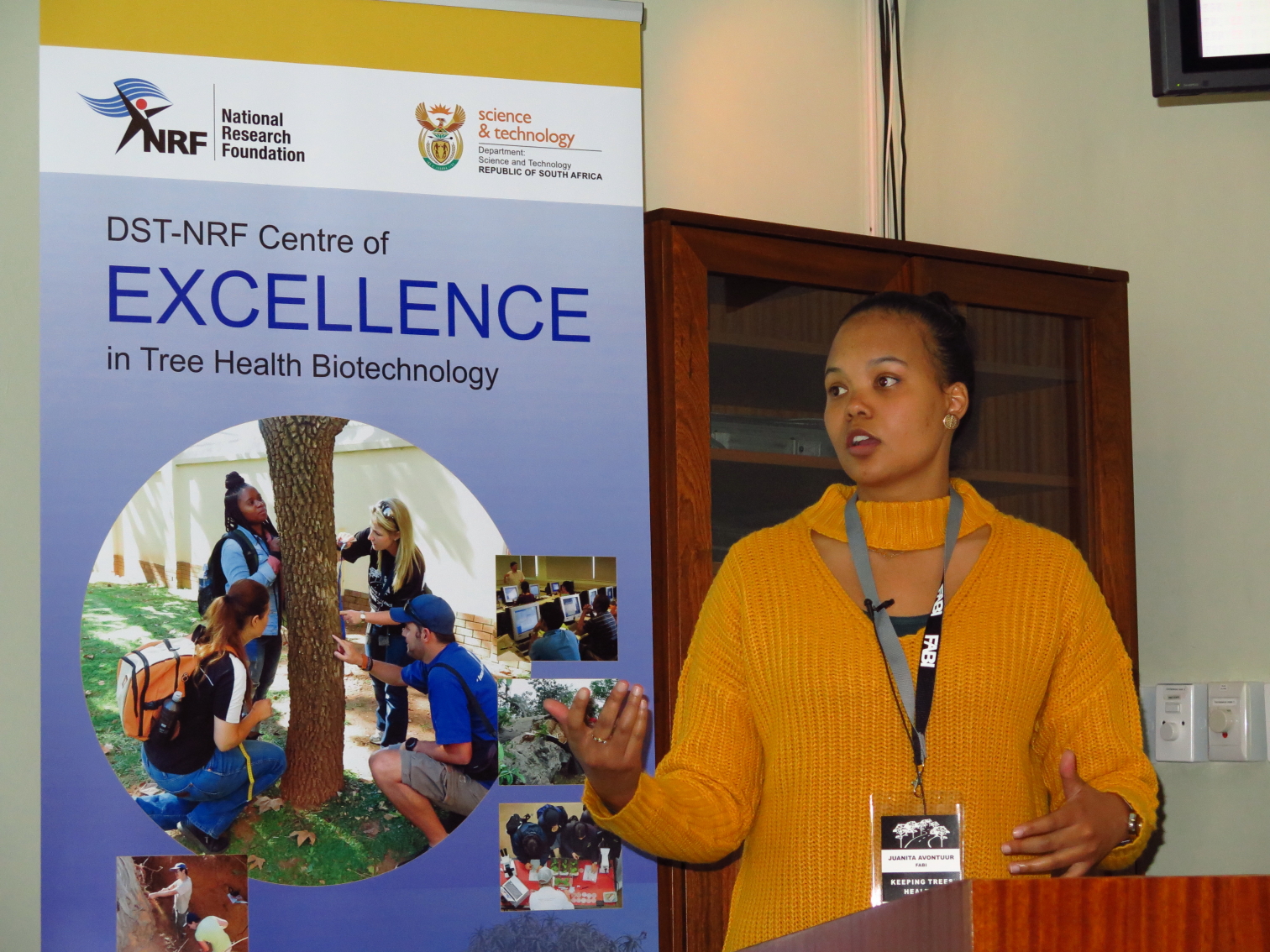 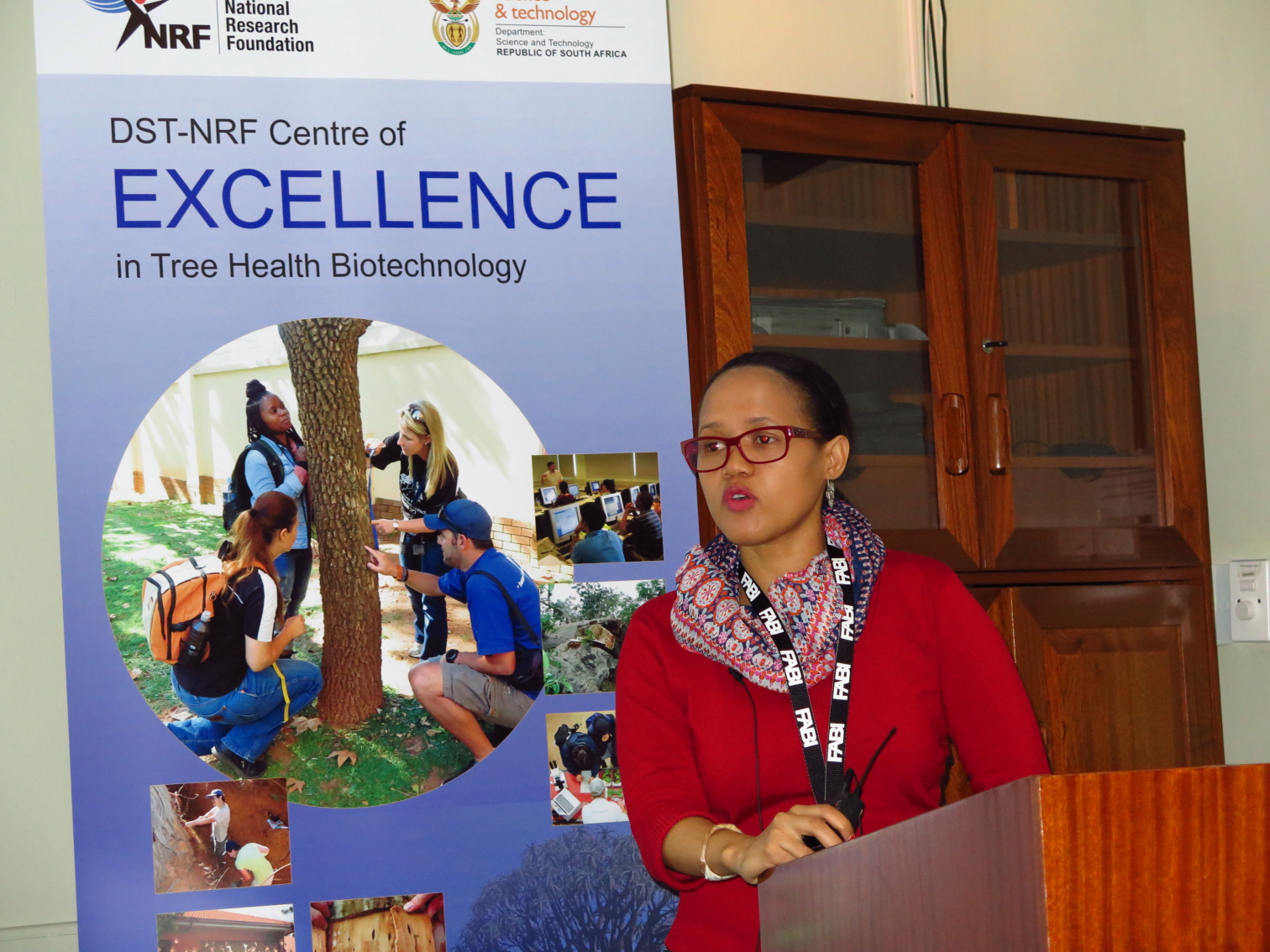 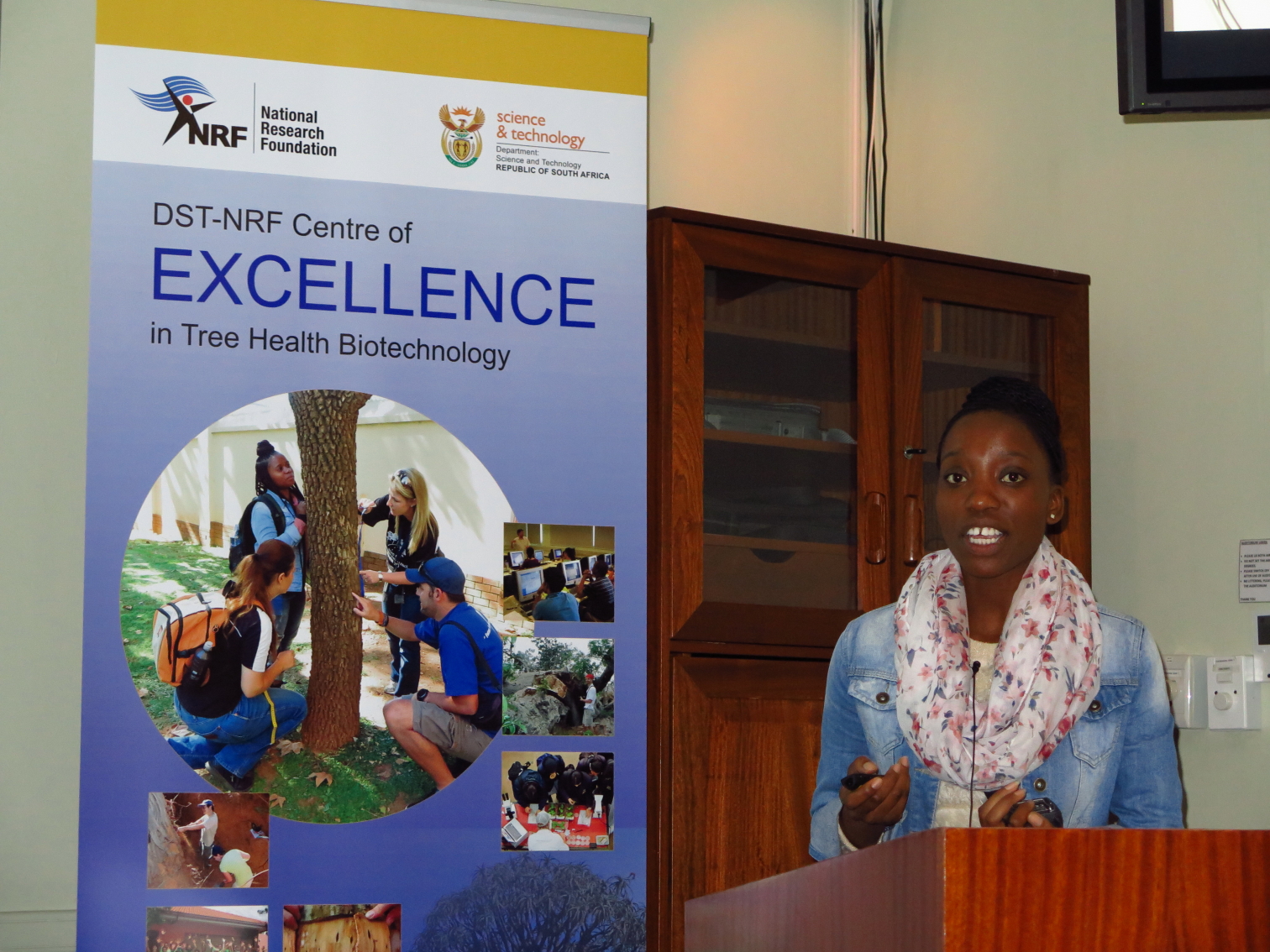 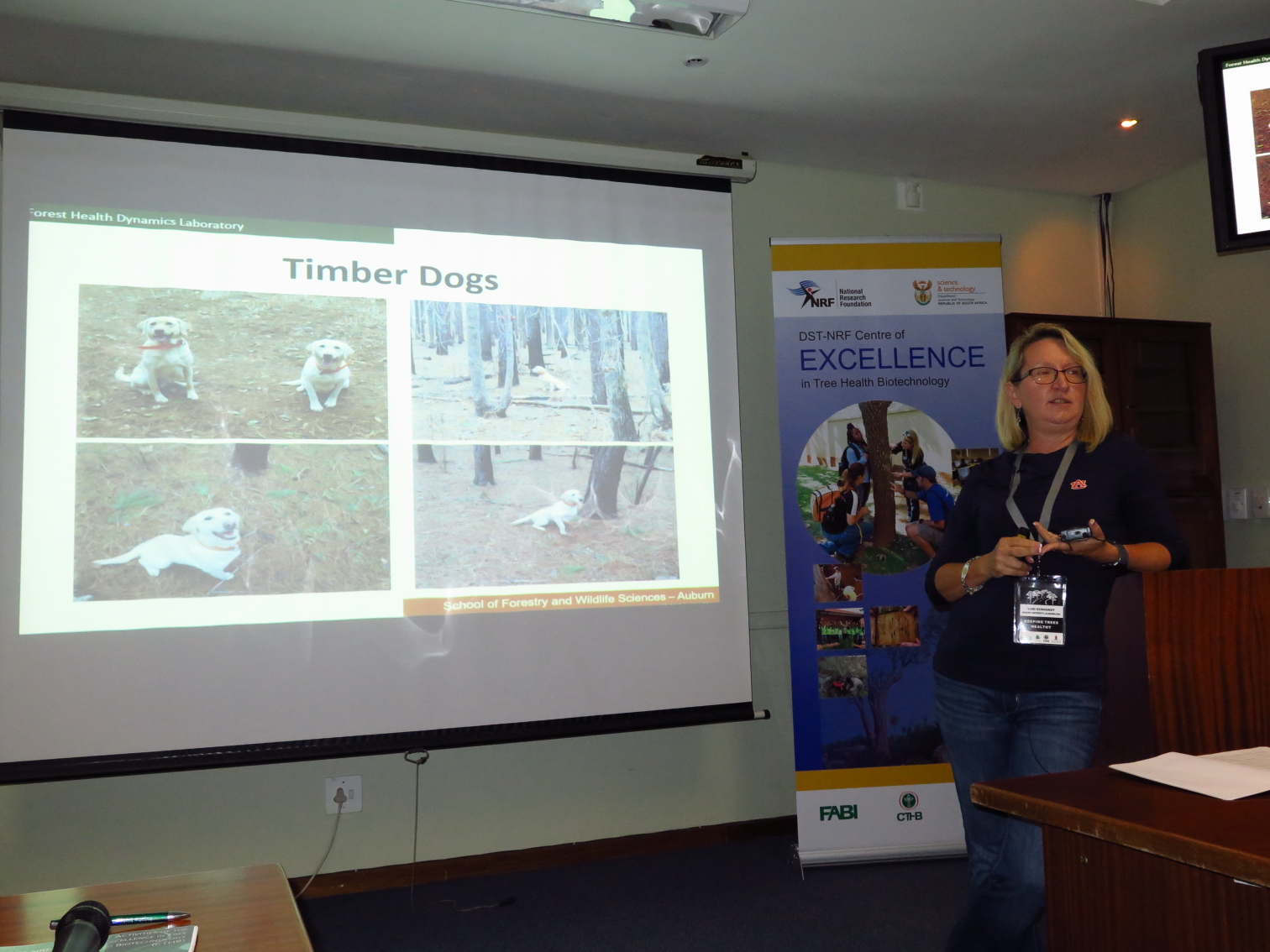 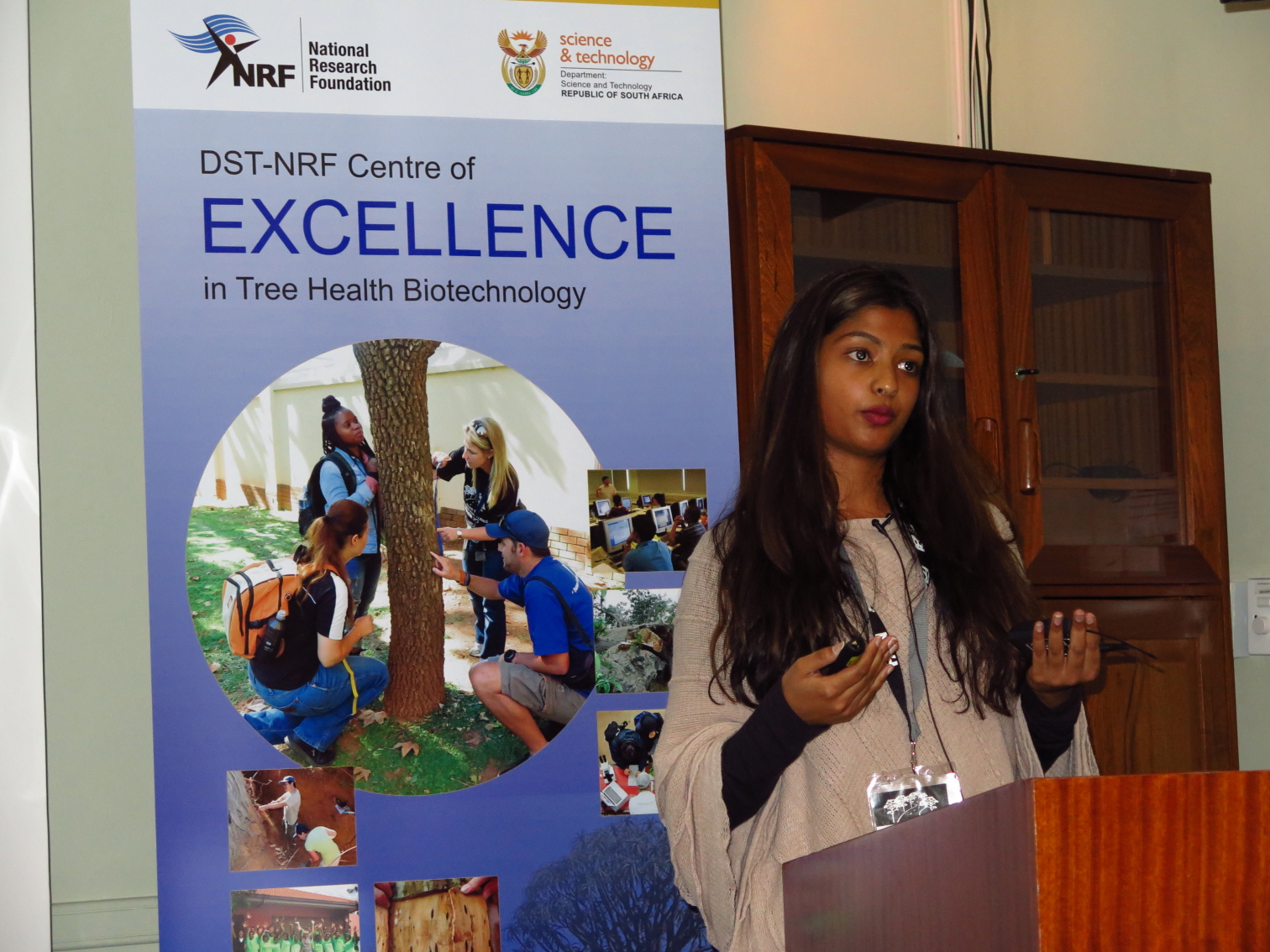 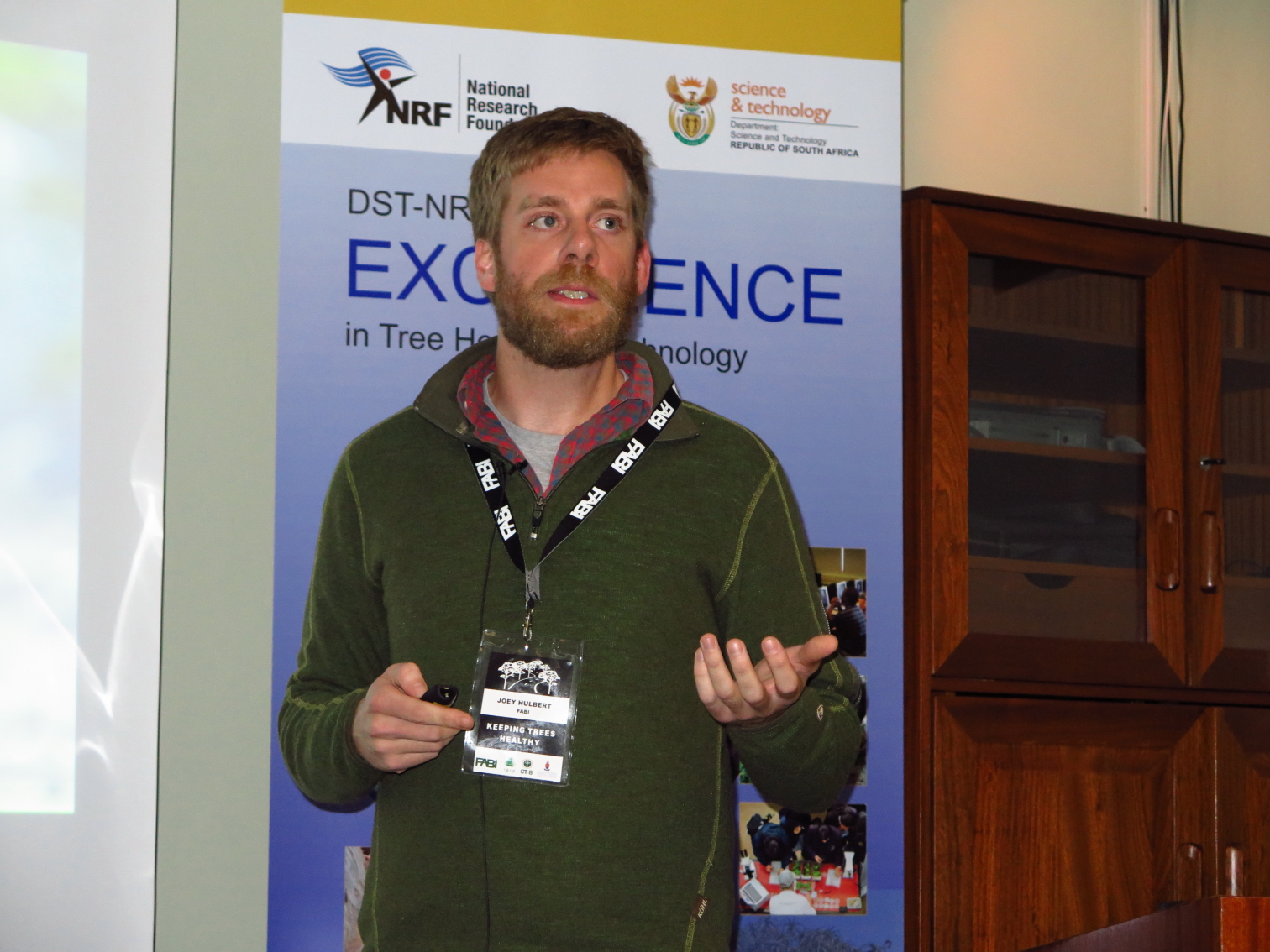 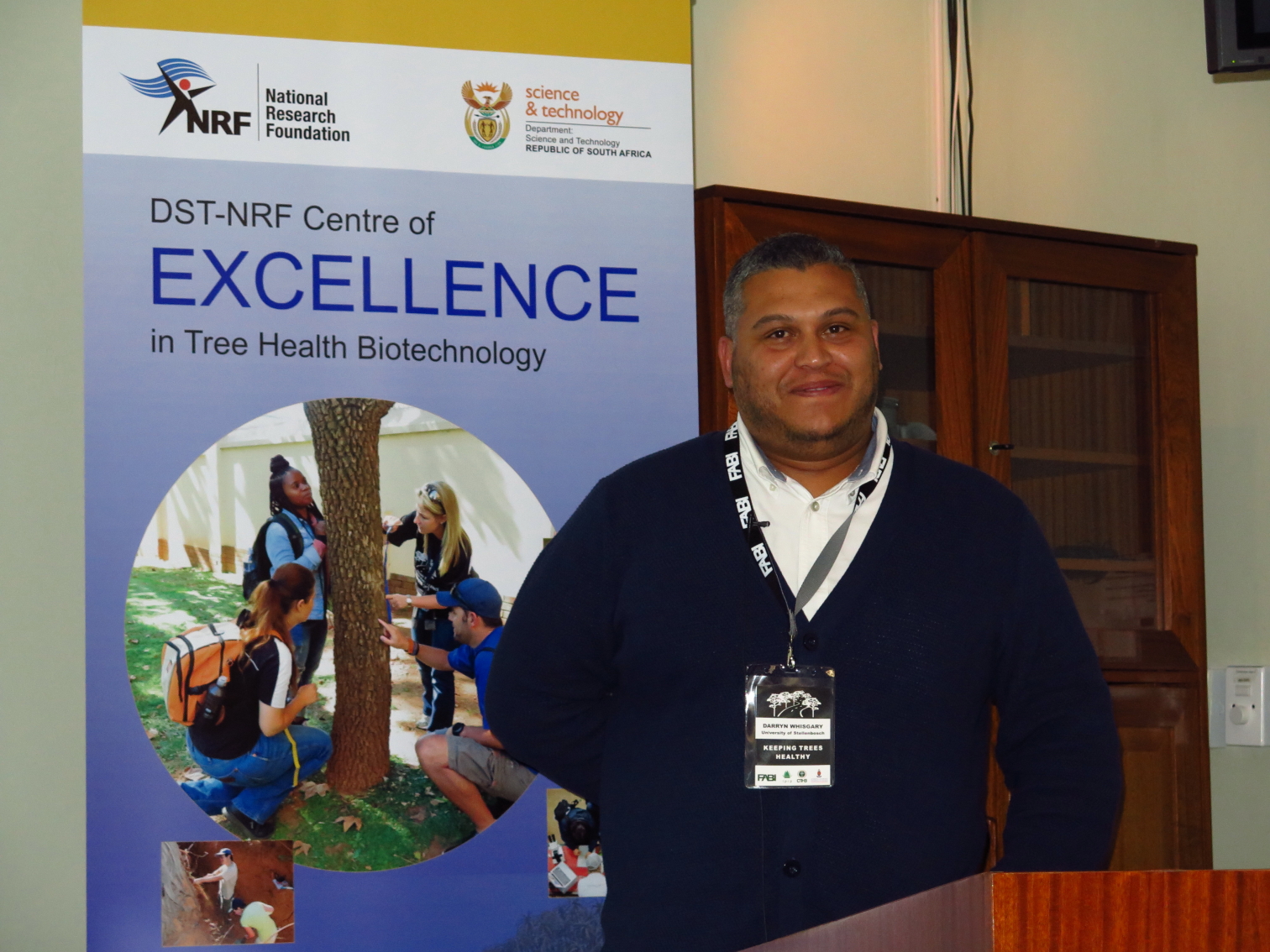 The DST-NRF Centre of Excellence in Tree Health Biotechnology (CTHB) hosted its 14th annual meeting at FABI on 14 May. This marked the first of three days dedicated to discussions about keeping trees healthy. Research by students at different institutions that form part of the CTHB dominated the proceedings on the day. Two guest speakers from Australia and the United States highlighted some problems affecting indigenous trees in their respective countries.v

Dr Geoff Pegg of the Department of Agriculture and Fisheries in Queensland, Australia, set the tone for the meeting with a snapshot of the devastation caused by the rust fungus Austropuccinia psidii on native Myrtaceae in that country. He warned that the pathogen of South American origin dominates fragile ecosystems in Australia. He recalled how the rust had depleted populations of native species such as Rhodamnia angustifolia and Rhodomyrtus psidioides, which no longer produce fruit or flowers subsequent to infection.

Prof Lori Eckhardt of Auburn University in Alabama spoke about pathogens affecting Pinus species in the south-eastern US, a region where the species are of major economic importance. She highlighted the effects of different pathogens such as Heterobasidion irregulare, Phytophthora cinnamomi and Mycosphaerella dearnesii on various Pinus species and the contribution of unconventional methods such as the training of “timber dogs” to “sniff out” infected trees.

PhD student at FABI Juanita Avontuur presented “Genome-informed Bradyrhizobium taxonomy: where to from here?” on her work on the slow-growing nitrogen fixing bacteria. PhD student at the University of Stellenbosch, Nombuso Ngubane, discussed her project dealing with the  “Endophyte communities within Olive species in the Core Cape Sub-region” that will consider four indigenous Olea species in Stellenbosch, Paarl and Somerset West.

In her presentation “Phylogenomic analysis: The whole is greater than the sum of its parts”, postdoctoral Fellow at FABI Dr Marike Palmer spoke about arguments relating to the construction of species trees using the bacterium Pantoea as a model. By understanding the evolutionary history of these organisms, insight can be obtained regarding their evolutionary trajectories and fates. This will aid in our fundamental understanding of how bacteria adapt to cause disease or potentially become beneficial, for example in indigenous plants and environments, she said.

PhD student at the University of Venda Elelwani Ramabulana presented on “Diversity and species overlap of the Botryosphaeriaceae on native and non-native Anacardiaceae trees”, looking at Sclerocarya birrea, Mangifera indica and Lannea schweinfurthii. She found that some species such as Neofusicoccum parvum, N. kwambonambiense and Lasiodiplodia theobromae overlap in native and non-native hosts. MSc student at the University of the Witwatersrand Anastashia Chetty revealed disparities in characteristics of “producers” and “poor producers” in the baobab, Adansonia digitata depending on the number of fruit they produce a year and the need for both to be conserved in the areas they are found. PhD candidate at FABI, Joey Hulbert highlighted the various Phytophthora species found in the Cape’s southern Afrotemperate forests.

In his presentation “The fungal phytobiome of Searsia lancea (karee) with Karee Malformation Disease in South Africa”, MSc student at the University of the Free State, Mark Mqeku, concluded that no dominant fungal group could have caused malformations on the indigenous tree species. FABI PhD student Mandy Messal discussed the benefits to tree health of understanding the different fungal communities found on Eucalyptus. These microbial communities play a role in plant disease. When comparing two different Eucalyptus clones she found that the genetic make-up of the host has a direct influence on the amount of fungal transcripts found. PhD student at the University of Stellenbosch Darryn Whisgary closed the session with his presentation on the adaptation of the legume Virgilia oroboides to growing in nutrient poor soil. He discussed nitrogen metabolism in the rhizosphere and Phosphorus recycling in response to low phosphate conditions.