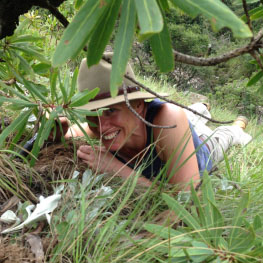 Dr Trudy Paap’s seminar “Plants, people and places” on 10 June chronicled the movement of plants through history and warned of the dangers of unregulated importation of plant material. Using historical data dating back to the ancient Egyptians, she introduced FABIans at the Monday morning meeting to early “plant hunters”. She showed how collecting plants from different parts of the world led to the opening of trade routes and the establishment of botanic gardens. Often, with the exotic plants introduced to new areas by these “plant hunters” were new pathogens, said Dr Paap.

Dr Paap described botanic gardens as “living museums” in conserving plants endangered by deforestation and urbanisation. She also discussed the role of botanic gardens in providing early warning for new pests and pathogens. She however warned that the effects of introducing new plants and pathogens are not always immediately visible and may take years, even centuries, to manifest.

She identified possibly two different Rugonectria species in the Durban Botanic Gardens causing cankers on Hymenaea verrucosa and cracking bark on Albizia chinensis. Rugonectria species have mostly been described from Southeast Asia, which suggests a “history of sharing plant material” between the British Empire and its former colonies, she said. These colonies included India, Hong Kong and the Malayan peninsula. Dr Paap further warned against the dangers of unregulated trading in plants and seeds online.