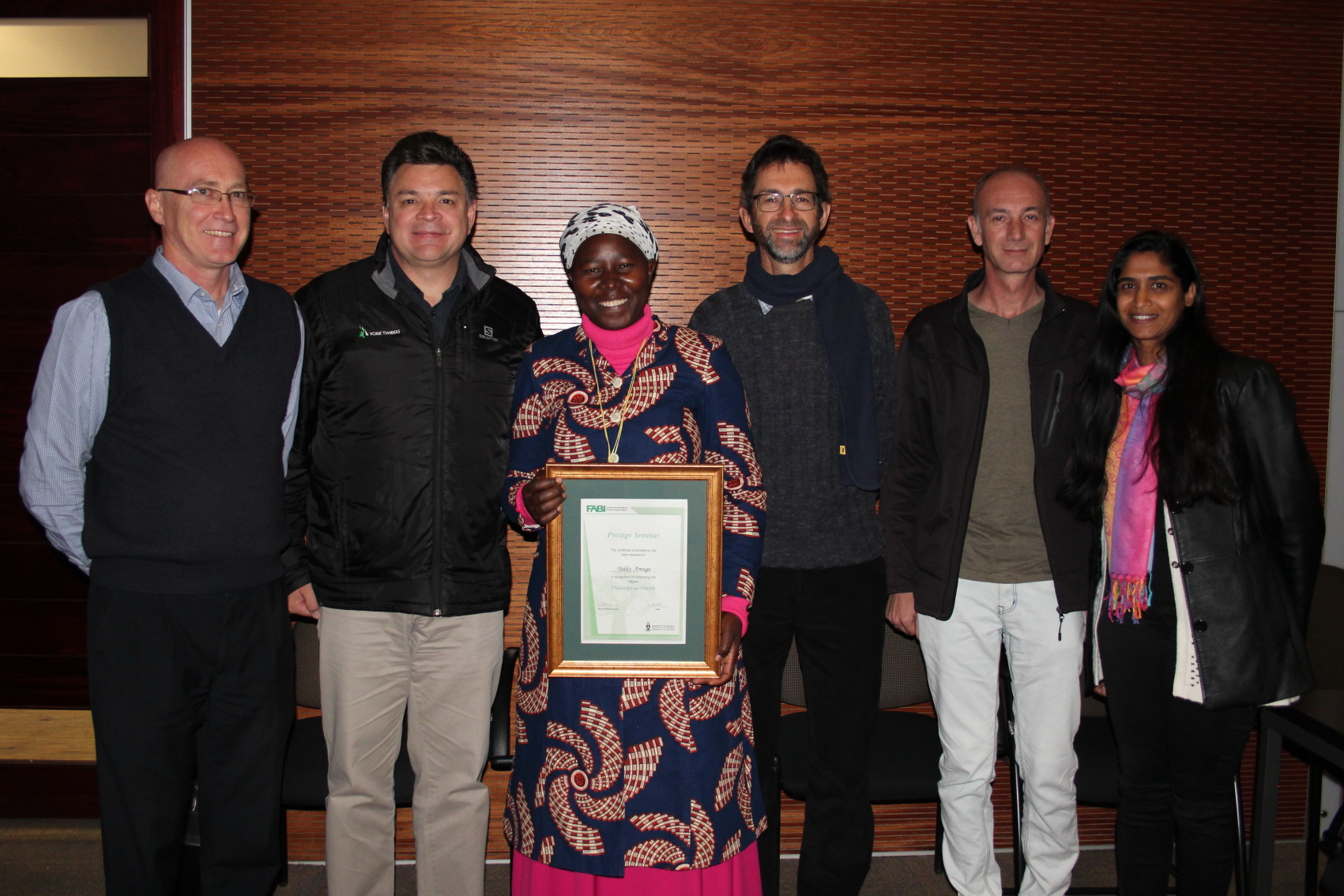 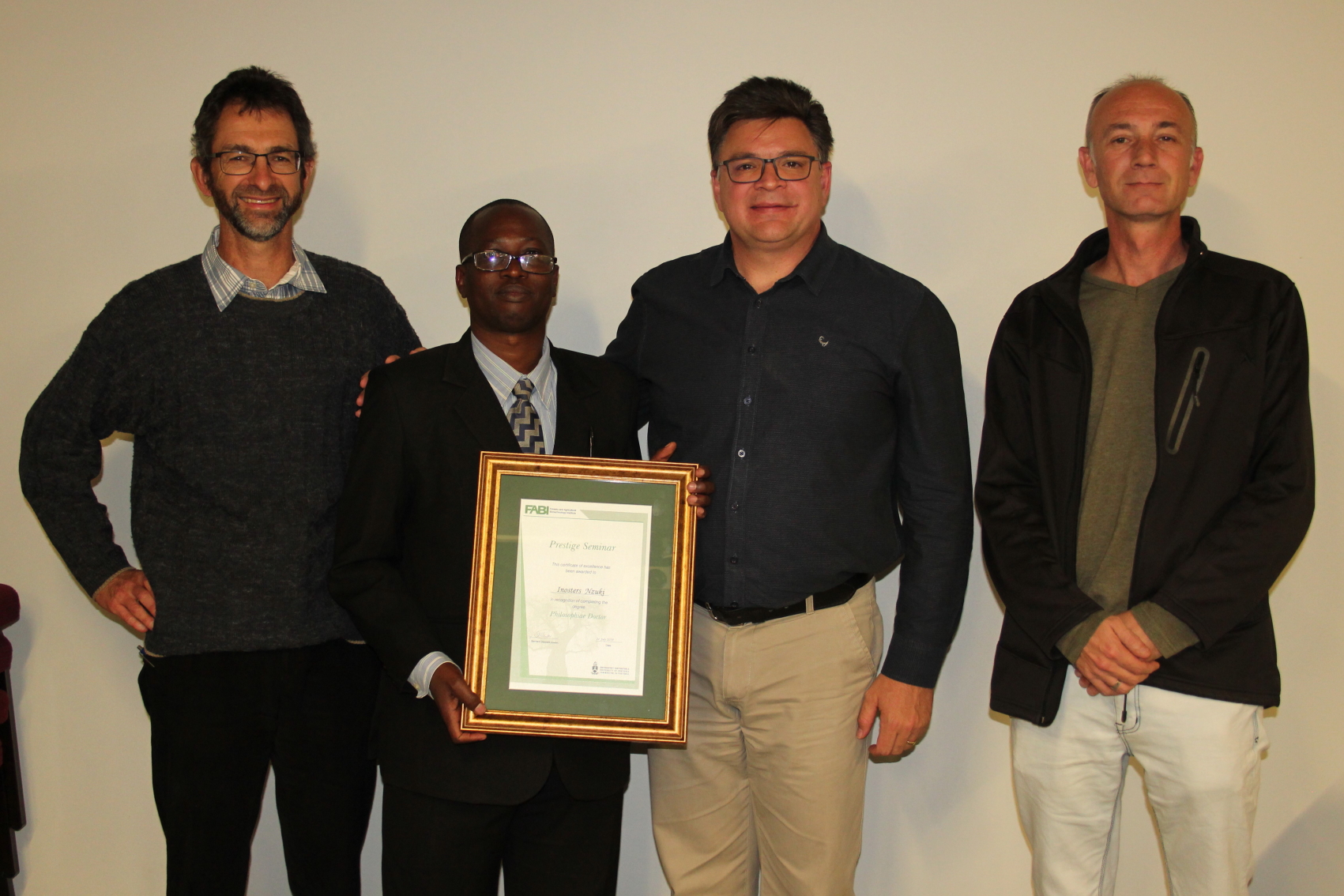 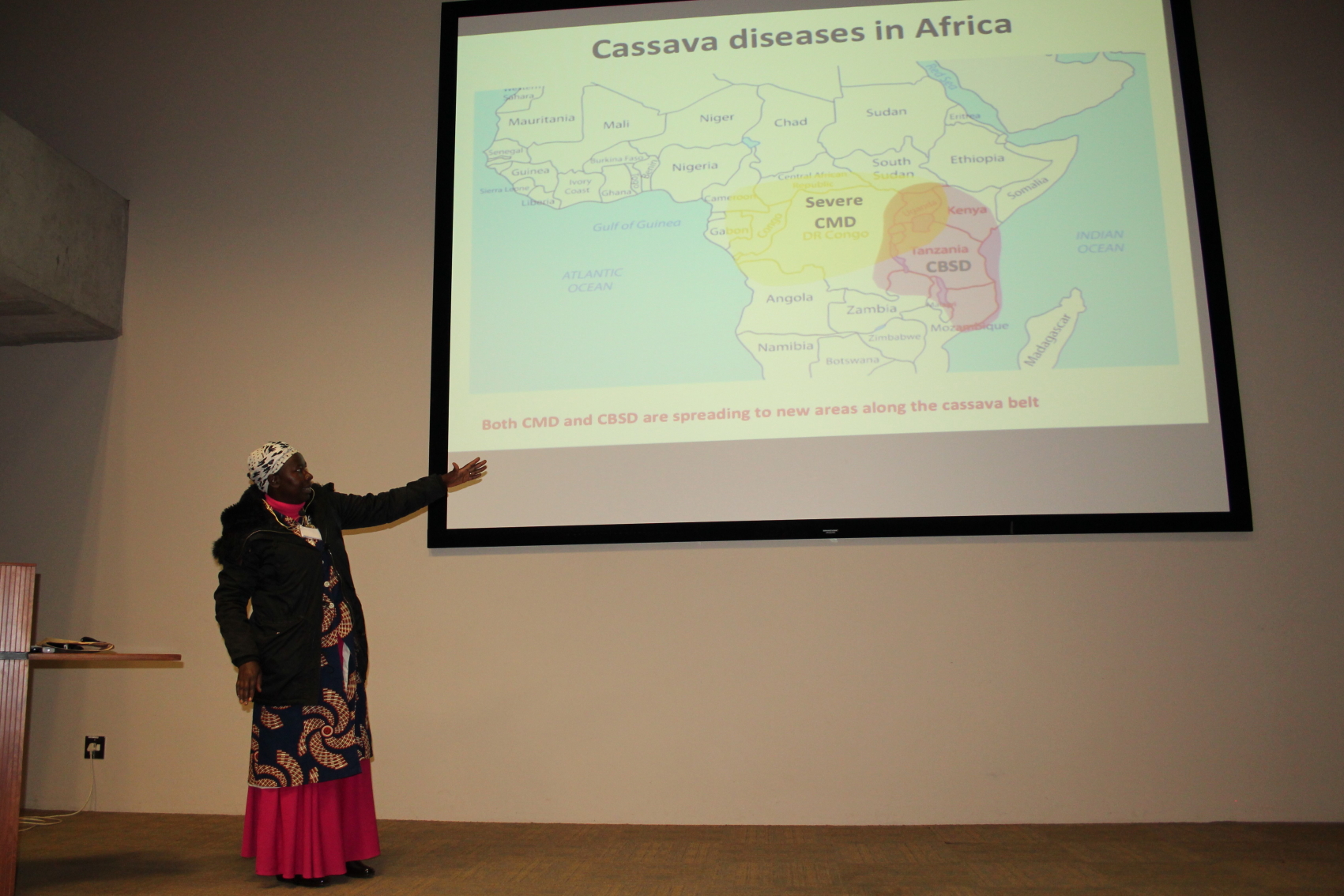 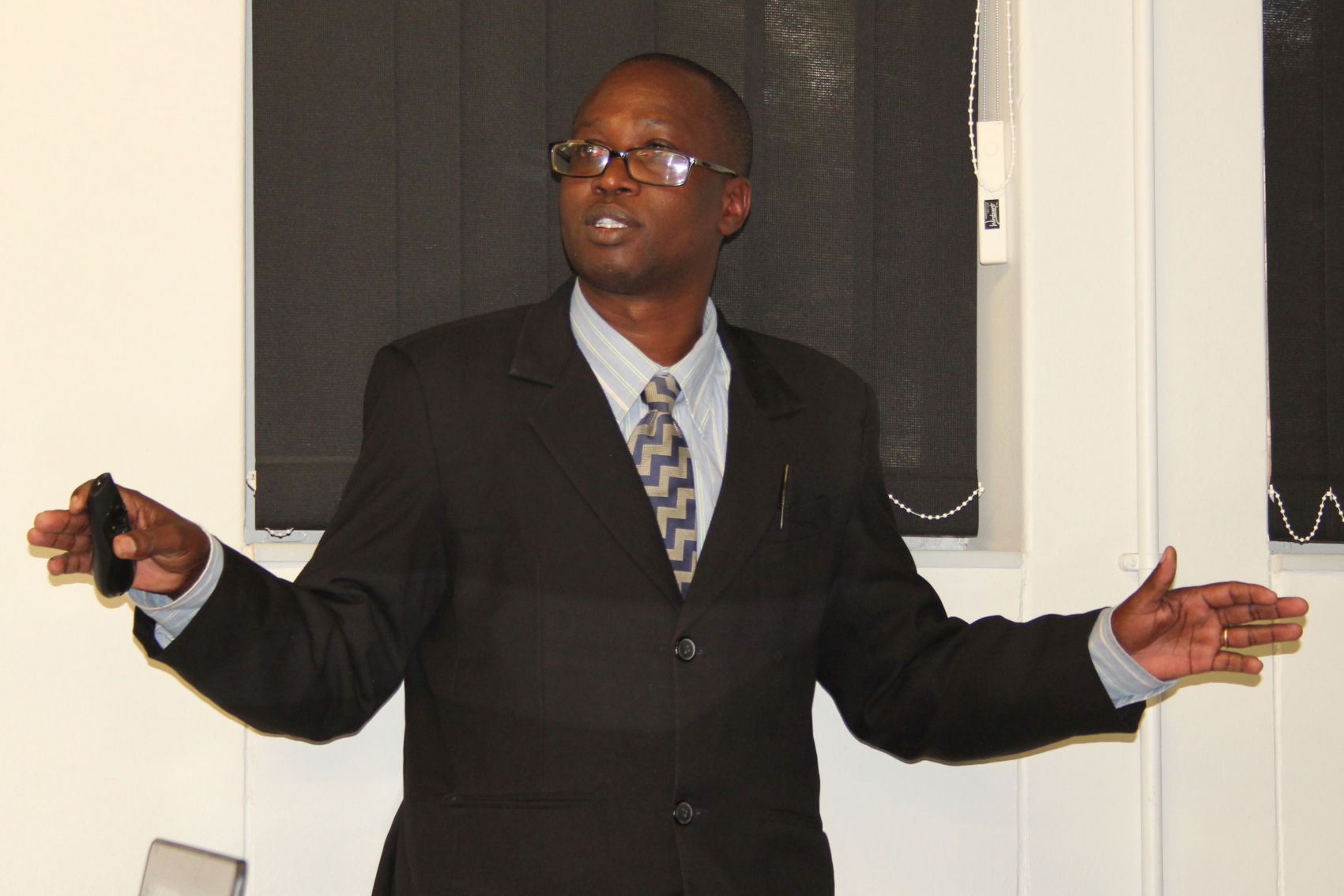 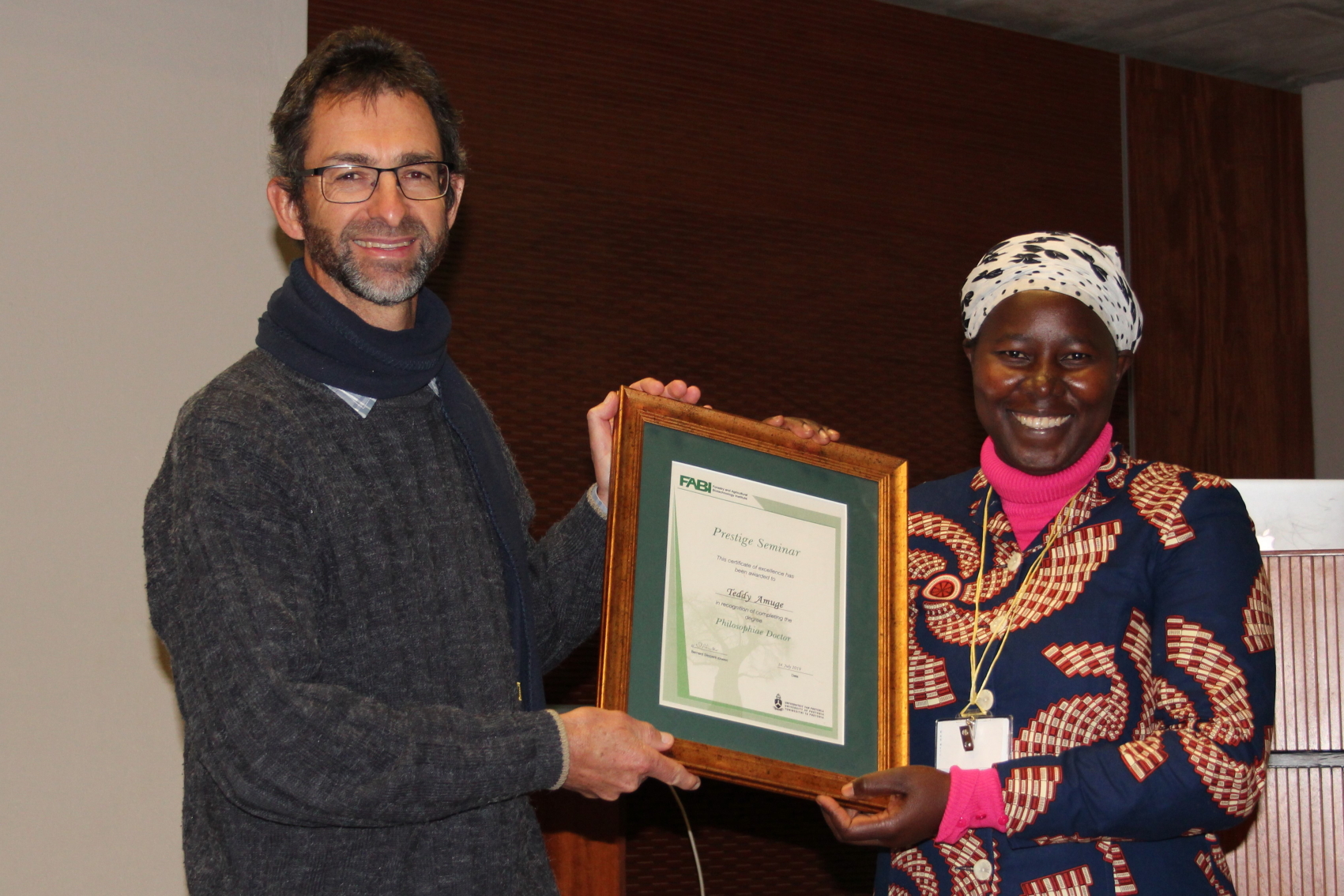 FABIans celebrated two prestige seminars on 24 July. Both presentations cast the spotlight on challenges facing cassava-growing countries in Africa. The presenters were part of a trio of PhD students registered at the University of Pretoria but based in Kenya and Uganda with projects funded by the Bill and Melinda Gates Foundation. Teddy Amuge kicked off the series with a presentation at the Plant Sciences Auditorium, while Inosters Nzuki delivered his seminar at a Department of Biochemistry, Genetics and Microbiology seminar room. Esther Masumba, the third of the cassava “musketeers”, presented her prestige seminar in June 2018.

Teddy presented highlights from her study titled “Genome-wide transcriptome analysis of cassava challenged with Uganda cassava brown streak virus (UCBSV)”. She completed this study under the supervision of Professor Dave Berger, Prof Zander Myburg and Dr Morag Ferguson of the International Institute of Tropical Agriculture in Kenya. Her examiners were Dr Maruthi Gowda of the University of Greenwich, UK, as well Dr Andreas Gisel of CGIAR, Nigeria and Dr Albe van der Merwe. The aim of her study was to determine the expression patterns of pathogen defence genes in two varieties of cassava (Manihot esculenta Crantz) – ‘Namikonga’, which is resistant to CBSV as well as ‘Albert’, which is susceptible to the virus.

Using RNA sequencing, she showed that plant-pathogen defence response genes were highly expressed in Namikonga compared to Albert. She found that UCBSV accumulates at significantly lower levels in Namikonga and that transcriptional changes associated with resistance to plant pathogens are significantly activated in Namikonga and are expressed earlier compared to Albert. Teddy explained that her study would contribute to the breeding of more resistance cassava varieties in the future and a better understanding of plant response to UCBSV.

Inosters Nzuki completed his study under the supervision of Prof Zander Myburg, Dr Morag Ferguson and Dr Albe van der Merwe. The title of his presentation was “QTL mapping for pest and disease resistance in cassava cultivars Kiroba and AR37-80 and coincidence of QTL with introgression regions from Manihot glaziovii”. The aim of Inosters’s study was to perform a genetic mapping of quantitative trait loci for resistance to cassava brown streak disease (CBSD), cassava mosaic disease (CMD) and cassava green mite (CGM) using a cross between the cassava variety, Kiroba and a breeding line, AR37-80.