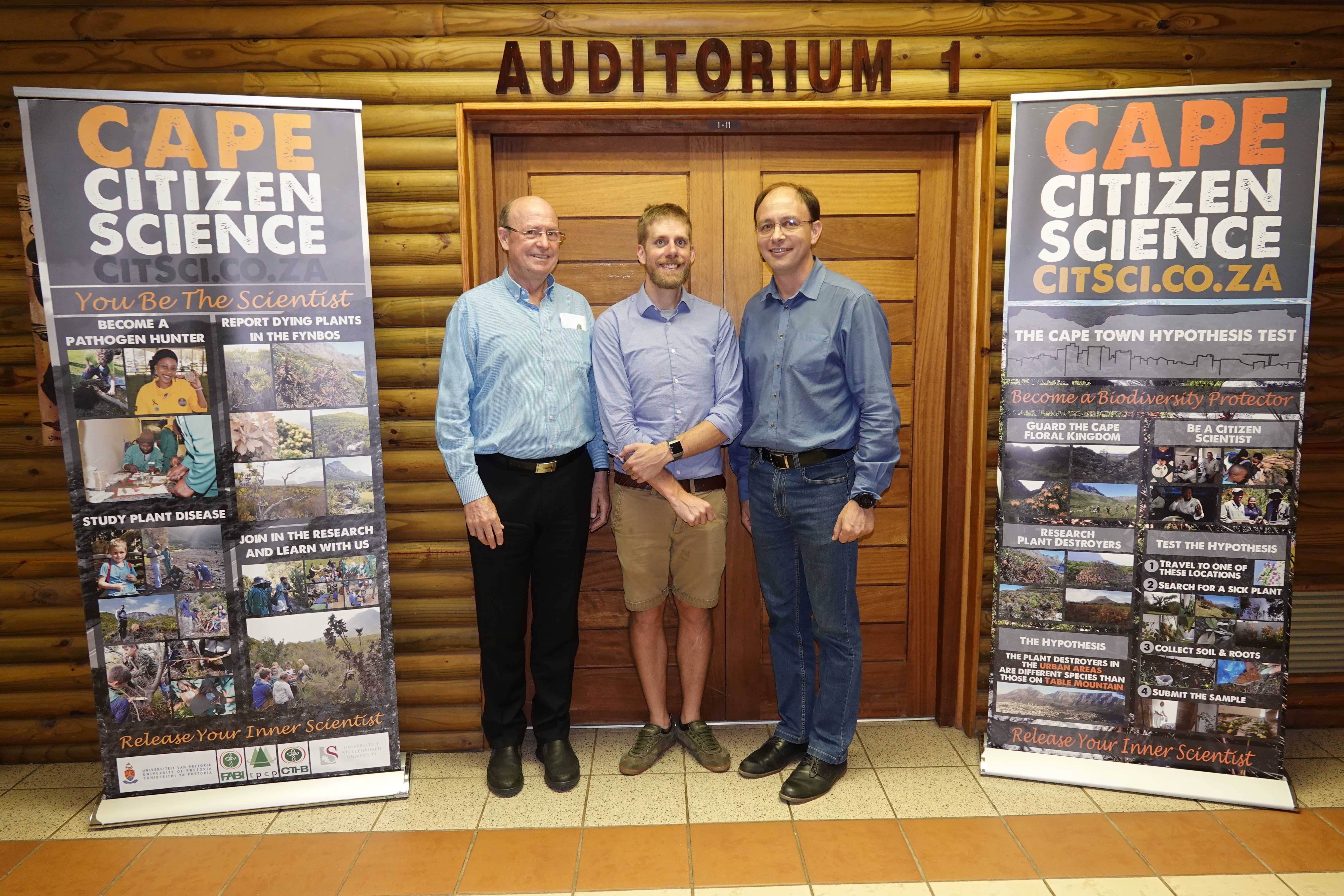 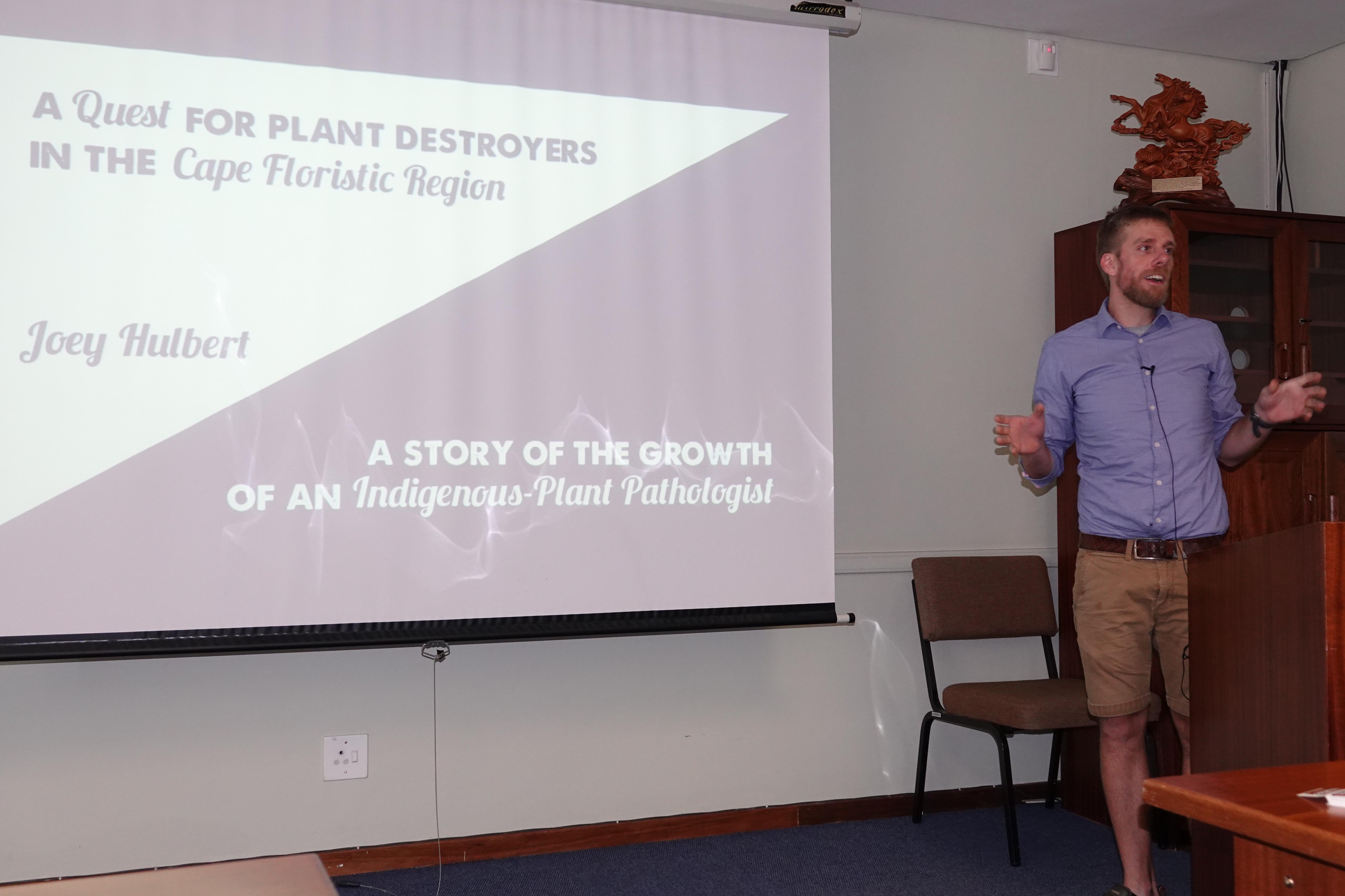 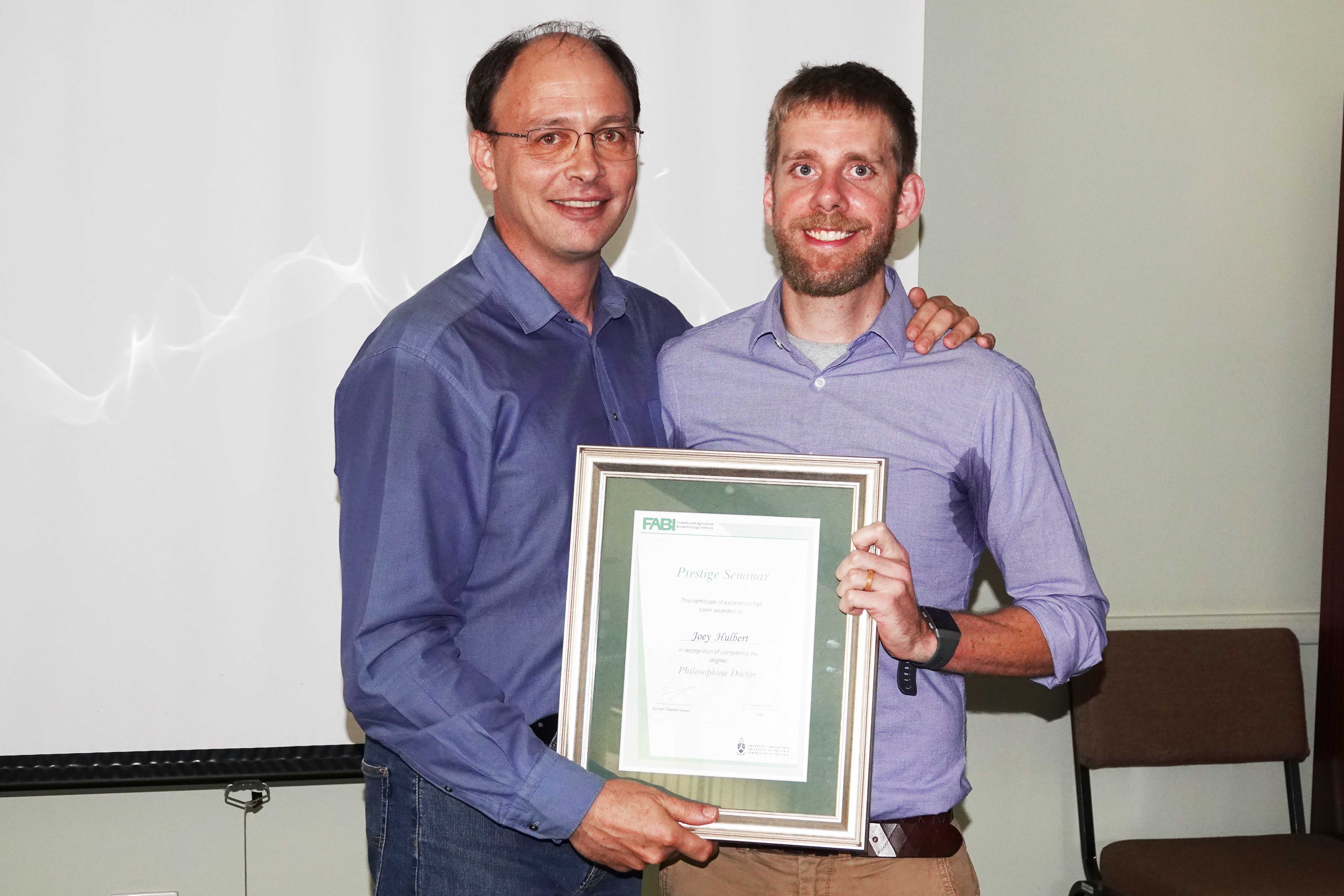 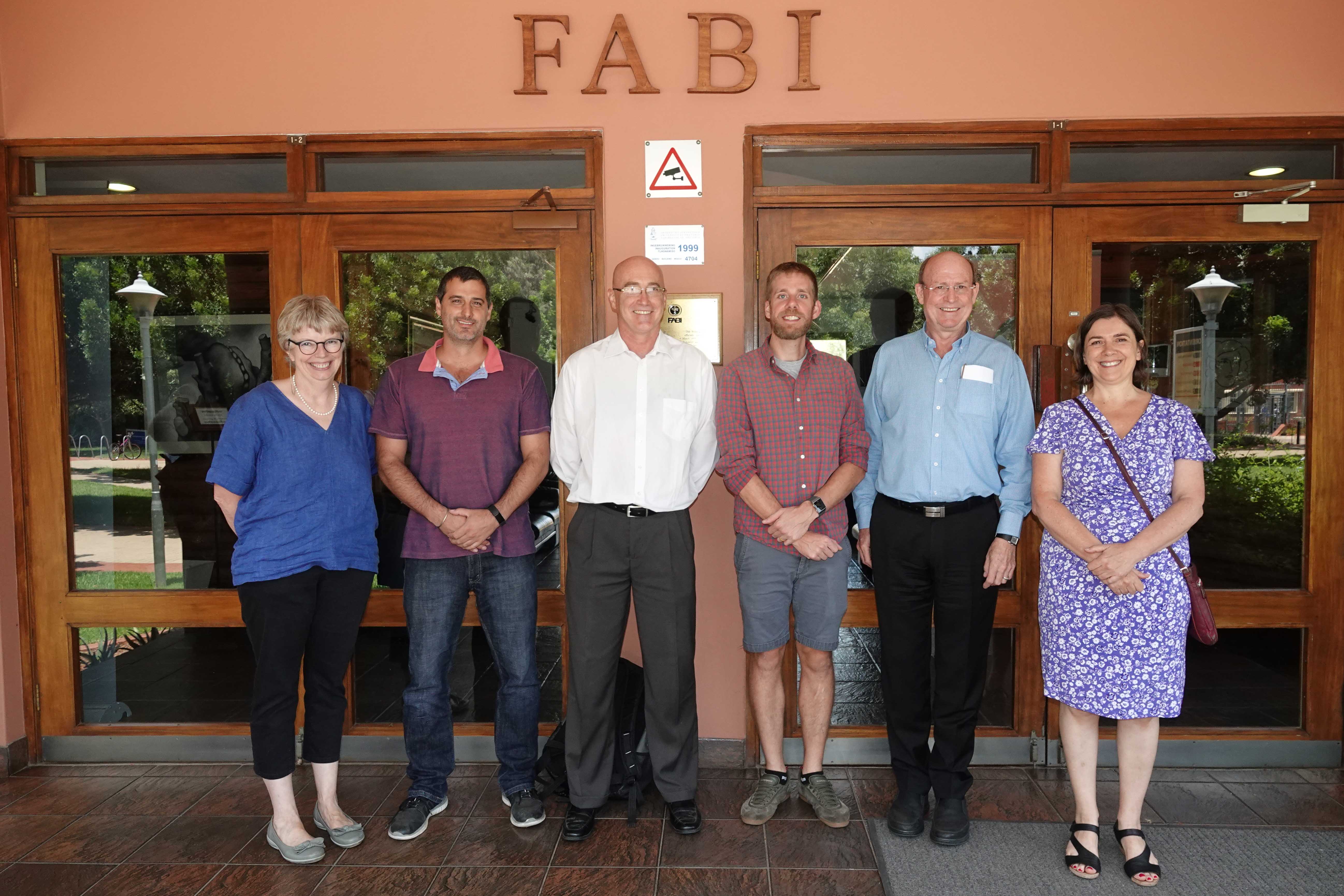 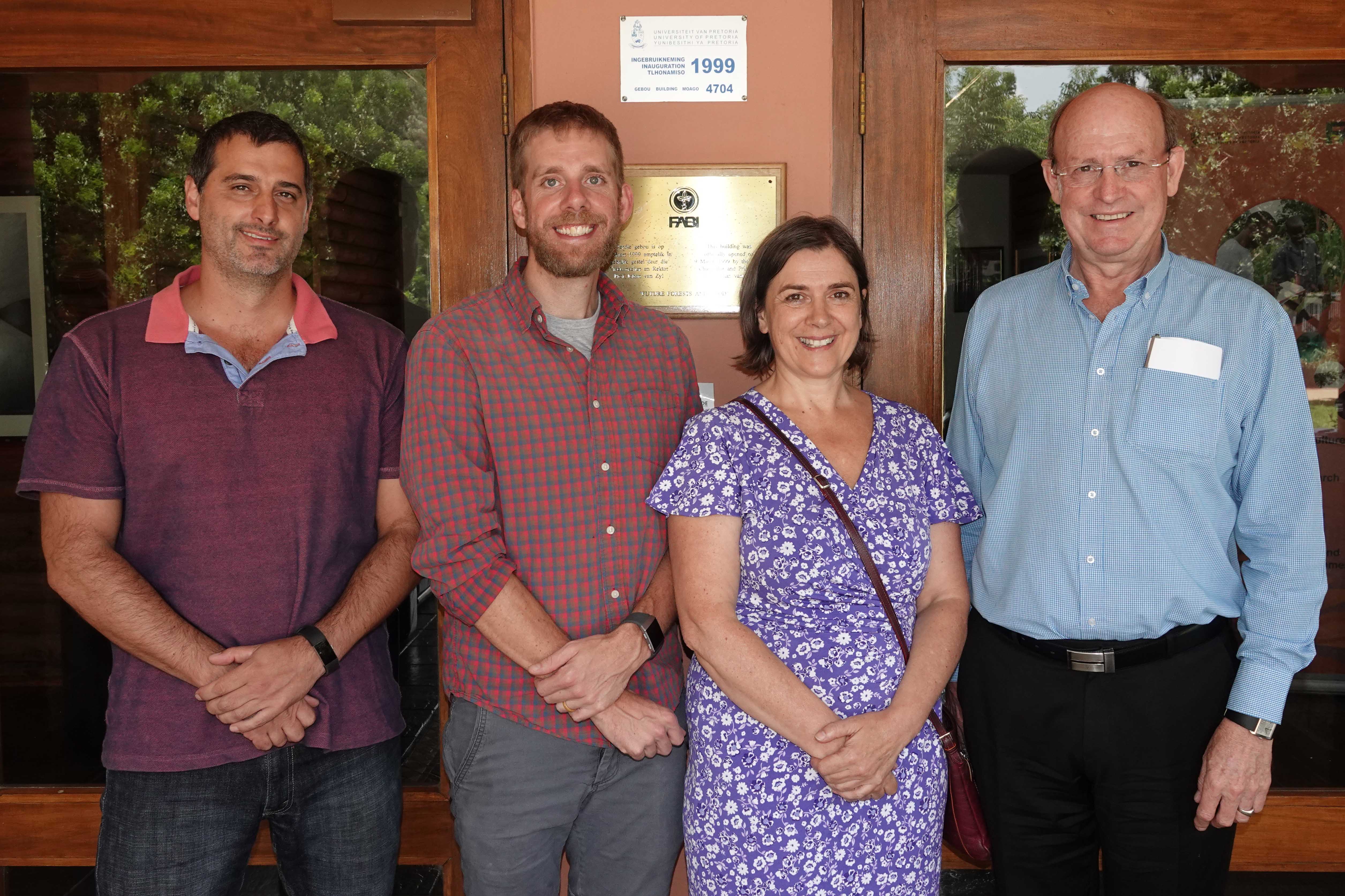 FABI would like to congratulate Joey Hulbert on becoming the first FABIan to successfully fulfill all requirements for completion of their PhD in 2020. He presented his Prestige Seminar entitled “The hunt for plant destroyers in the Cape Floristic Region” to a packed FABI auditorium on 28 January before successfully defending his thesis in an oral examination the following morning. His project was done under the supervision of Prof. Mike Wingfield, Prof. Treena Burgess from Murdoch University in Australia and Prof. Francois Roets from Stellenbosch University. His internal examiner was Dr Tuan Duong and external examiners Prof. Everett Hansen from Oregon State University, USA and Dr Peter Scott from Plant and Food in New Zealand.

Joey is the first student in the Institute to have incorporated Citizen Science in his research project having engaged with the public and numerous school children during his stay in the Western Cape. These activities are recorded on his Cape Citizen Science website. He raised $5,000 to fund his extension work through a crowd-funding initiative prior to starting his PhD. FABI founding Director Prof. Mike Wingfield recalled when he first met Joey during the XXIV IUFRO World Congress 2014 in Salt Lake City where he was elected the President of the Organization. Joey then cycled home to Oregon afterwards, a distance of some 1,300km.

Professor Nigel Barker, the Head of Department: Plant and Soil Sciences, described Joey’s prestige Seminar as “refreshing” and thanked Mike for going out on a limb to support this project, resulting in a marvelous piece of work done Joey’s way.

In his presentation, Joey discussed the importance of conserving the biodiversity of the Cape Floristic Region and highlighted the threats posed by plant-killing species in the Phytophthora genus. He also shared the results from the engagement activities of Cape Citizen Science and discussed the merits of involving the public in research to enhance biosecurity.

Through independent sampling and a citizen science program, Joey’s body of work revealed the presence of 17 described Phytophthora species, one informally described Phytophthora species, and three putative hybrids. Seven of these were not previously known to occur in South Africa. The work also revealed a relationship between the invasion of P. cinnamomi and the health of trees and evidence is provided for dissimilarity between invaded and non-invaded plant communities. In addition, through a synthesis of modern Phytophthora species descriptions and a diversity study in botanical gardens, it was possible to provide evidence for the importance of surveying urban environments. Joey demonstrated  the potential of public engagement to enhance biosecurity, and in this project it was shown that eight of the Phytophthora species recovered were only because of citizen participation.

Joey now plans to return to the USA with the drive to launch a similar program to engage the public in research to keep trees healthy. To view a video about Cape Citizen Science's youth engagement activities, click here.