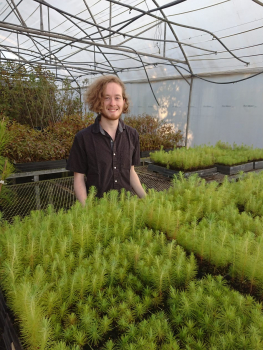 I joined FABI in 2020 during my BSc Hons Genetics degree, under the supervision of Professor Sanushka Naidoo and co-supervision of Dr Erik Visser, after completing a dual major BSc Zoology and Genetics degree in 2019. I completed my Honours project in the Eucalyptus Pine Pathogen Interaction research team, where the aim of the project was to identify and characterise core virulence genes involved in the interaction between Fusarium circinatum and host Pinus spp. with differing resistance phenotypes. Using bioinformatic analyses, I found seven putative core virulence factors drawn from 460 transcripts expressed in all host species during F. circinatum infection. The gene functions likely range from defence against other microbes, defence against the host immune response, as well as host attack. The expression of these genes by F. circinatum likely promotes effective host colonisation and increased disease severity.

I am currently working on my MSc Genetics degree, where the aim of the project is to determine whether one of these putative F. circinatum virulence factors, identified from my honours research, indeed contributes to the pathogen’s virulence in Pine. This research will involve the use of agroinfiltration, CRISPR knockout mutant development, and investigating in planta defence responses to recombinant proteins.