In light of the current pandemic, many scientific meetings have been cancelled. One of the most significant benefits of these meetings is our engagement with our science and colleagues. Recently the IUFRO Working Party 7.03.16 was launched and we announce a five talk webinar series to promote both the new Working Party and the importance of the behavioral and chemical ecology of forest insects, while providing a platform for these research communities to engage and network. The webinar series is co-hosted by the Forestry and Agricultural Biotechnology Institute, University of Pretoria, the Institute for Forest Entomology, Forest Pathology and Forest Protection, BOKU, the Universidad de la Republica, Uruguay and the Canadian Forest Service.  This webinar series has five talks covering a wide range of topics related to behavioral and chemical ecology of forest insects.  These virtual seminars are open to all registered participants.

Please fill in the registration form on the left menu of this page if you are interested in attending any of the seminars (please see the list of seminars, speakers and dates in the drop down menu on the left).  After registration you will be contacted by email with a link to attend the seminars. If you wish to contribute to future webinars series please contact the coordinators of this Working Party (Drs. Jeremy Allison, Sigrid Netherer and Andres Gonzalez).

Please fill in the registration form below if you are interested in attending any of the seminars in this series. After registration you will receive a confirmation email with a link to attend the seminars. Please also check your junk mail folder. If you do not receive a confirmation email, please notify Quentin Guignard at quentin.guignard@fabi.up.ac.za.

September 17 - Insect olfaction in the forest

13:50 - 14:10 The role of ethanol for the fungal symbionts of bark and ambrosia beetles. Maximilian Lehenberger, University of Freiburg, Germany 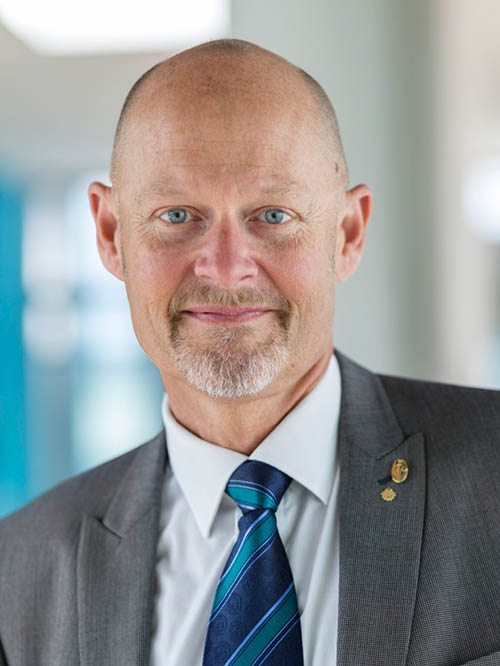 Abstract: All insects, with few exceptions, depend heavily on olfactory input to survive and reproduce. In this mini symposium we will put the spotlight on a couple of examples, where forest insects and their sense of smell are being investigated. In my short introduction I will provide a brief background to the insect sense of smell in general, mainly based on our present research on fruit flies and moths, and then proceed with a quick look at some of my own scarce projects on forest insects.

Biography: BSc and PhD in Ecology at Lund University 1979-1988. Postdoc at the University of Arizona 1989-1990. Career in Lund until Full Professor 2001. Recruited as Professor, Head of Department and Vice Dean at the Swedish University of Agricultural Sciences (SLU) in Alnarp in 2001. Called to a Max Planck Directorship at the Max Planck Institute for Chemical Ecology in Jena in 2006. Served as Vice President of the Max Planck Society 2014-2020. Full CV. 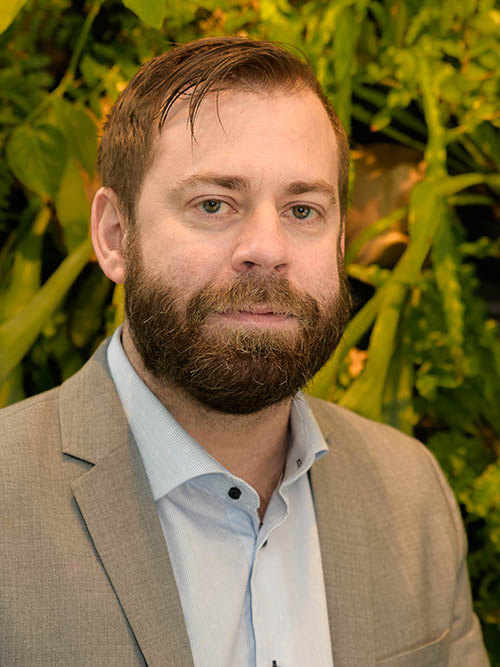 Abstract: Improved management of the destructive Eurasian spruce bark beetle Ips typographus (‘Ityp’) is urgently needed, and one avenue forward could be to target the odorant receptors (ORs), which are used by the beetles to find mates and host trees. We characterized the function of two ItypORs, showing selective responses to the  pheromone compounds (S)-(-)-ipsenol and (R)-(-)-ipsdienol, respectively. We also predicted the ligand binding sites of these ORs, and the importance of two residues in pheromone binding was experimentally supported. Apart from reporting the first bark beetle ORs with determined functions, our findings may represent an important step towards improved control of bark beetles. For instance, these ORs can now be screened for better agonists or antagonists, or employed in biosensors for detection of bark beetle infestations.

Biography: PhD from the Swedish University of Agricultural Sciences in 2011. Since 2017 Associate Professor at Lund University, Sweden, with main research interests including olfaction in bark and ambrosia beetles with special emphasis on the evolution and function of odorant receptors. Since 2019 also Principal Investigator in the Max Planck Centre next-Generation Insect Chemical Ecology (nGICE). 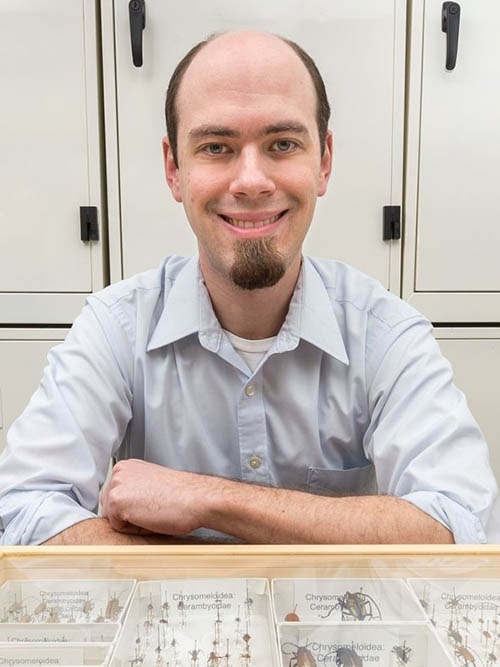 Title: Olfactory genomics as a tool to expedite pheromone identification in longhorned beetles

Abstract: The family of longhorned beetles (Coleoptera: Cerambycidae) includes many wood-boring pests of international significance for which attractive pheromones can be a useful tool in monitoring and control. Members of the family produce several pheromone structures that are conserved across genera, tribes, and subfamilies, resulting in many clusters of species that are attracted to identical pheromone components. Each pheromone is detected by a corresponding chemoreceptor expressed in the antennae, but it remains unclear if the chemoreceptor genes have remained as conserved as the pheromones. In this talk, I will discuss recent progress on the pheromone biology of longhorned beetles, their chemoreceptors, and the possibility of using conserved chemoreceptor sequences to infer the pheromone chemistry of unstudied species.

Biography: Assistant Professor at the University of Wisconsin Oshkosh studying the chemical ecology of insects, especially the order Coleoptera. Recent laboratory research has emphasized olfactory biology of the Cerambycidae and the evolution of chemoreceptors across beetle families. 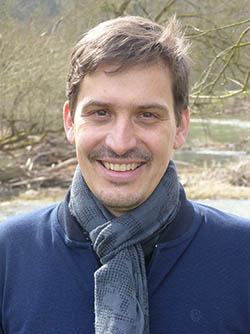 Abstract: Insect-fungus mutualisms are highly diverse and particularly common in plant-colonizing insects. Here I extract some information from a comprehensive review on insect-fungus mutualisms and give an overview of the ones that are relevant to forestry. Services exchanged in insect–fungus mutualisms include nutrition, protection, and dispersal. Insects disperse fungi and can provide fungal growth substrates and protection. Obligate dependency has (a) resulted in the evolution of morphological adaptations in insects and fungi, (b) driven the evolution of social behaviors in some groups of insects, and (c) led to the loss of sexuality in some fungal mutualists..

Biography: Peter Biedermann is born in Austria. After studying in Graz, Vienna (A) and Bern (CH) he graduated with a Ph.D. on the social behavior of ambrosia beetles at the University Bern in 2012. After several postdocs at the USDA, UW Madison, Wageningen University and the Max-Planck Institute for Chemical Ecology in Jena, he established his own Emmy Noether Research Group at the University of Würzburg in 2017. Since April this year, he is a full professor for Forest Entomology and Protection at the University of Freiburg, Germany. 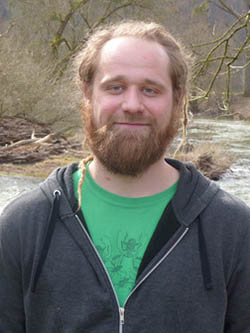 Abstract: Ethanol is long known as the main attractant for the xylem-boring ambrosia beetles, whereas phloem-boring bark beetles usually use other cues for host finding. The ethanol preference is surprising giving its antibiotic effect on fungi, which are nutritionally important for the fungus-farming ambrosia beetles. Here we show that ethanol is not only non-toxic to ambrosia beetle fungi, but actually necessary for successful beetle reproduction and their fungi for outcompeting other fungal antagonists. Even though tested bark beetle fungi are from the same phylogenetic lineages, most of them were highly negatively affected by ethanol. This suggests that ethanol resistance is a derived and repeatedly evolved trait in the nutritional mutualists of ambrosia beetles.

Biography: Maximilian Lehenberger is born in Germany. He has completed a Master´s degree in forestry at the Technical University in Munich in 2018. Now he is a Ph.D. student working on the physiology of fungal associates of bark and ambrosia beetles in the lab of Peter Biedermann. Next year he will start a PostDoc at the Max-Planck-institute for Chemical Ecology in Jena. 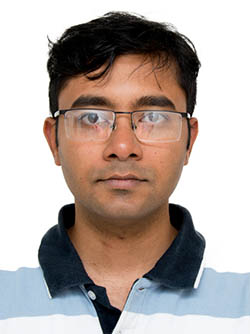 Biography: Sifat Munim Tanin is born in Bangladesh. He has completed his Master's degree in Ecology from the Norwegian University of Life Sciences in 2020. Now he is working on developing his Ph.D. proposal on the fungal symbionts of bark beetles under the supervision of Peter Biedermann at the University of Freiburg, Germany. 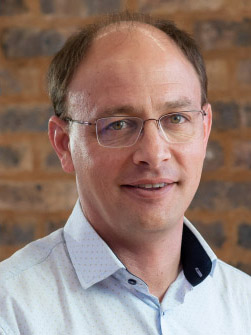 Abstract: The woodwasp Sirex noctilio is holometabolous and does not feed as an adult. As a result they are expected to experience strong selection for mate and host location. The dominant modalities that most insects use to interact with their abiotic and biotic environment are olfaction and vision. This seminar will provide an overview of S. noctilio and provide context for the accompanying seminars that will focus on the behavioural, visual and chemical ecology of S. noctilio in the context of mate and host location, population dynamics and geographical spread.

Biography: Dr. Slippers is a Professor in Genetics and Director of the Forestry and Agricultural Biotechnology Institute at the University of Pretoria. He was a founding member of the Global Young Academy, served as co-chair of this organization and was the founding Director of Future Africa. His research focuses on the molecular ecology and evolution of fungal communities, fungal pathogens and insect pests of trees as well as their symbioses and natural enemies. 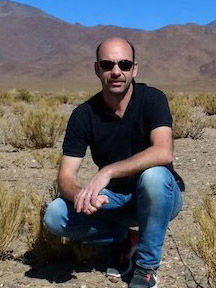 Abstract: How insects interact with their environment, as well as their body size, strongly influences their ecological success. When given species arrive and establish in new areas, evolved life-history traits partly affect their invasion abilities and the impact they may have within the new range. I explore several of these attributes in the woodwasp Sirex noctilio (Hymenoptera: Siricidae) in Patagonia with the aim of helping us better understand population outbreaks and geographical spread of this invasive forest insect.

Biography: Dr. Corley is an Associate Professor of Behavioural and Population Ecology at the Universidad Nacional del Comahue in Bariloche, as well as a high-grade researcher in biology for CONICET, the National Science Council of Argentina. He also is founder and PI of the Insect Population Ecology Group at IFAB (Institute of Forest and Agricultural Research, INTA-CONICET) where he also serves as Vice-chairman.  Juan is the current Coordinator of the IUFRO Working Party on “Ecology and Management of Bark and Woodboring Insects” and soon-to-be Editor in Chief of Ecological Applications, as from 2021.  His research focuses on understanding behaviour, invasion and population ecology of forest insects and on how this basic biological knowledge can be used for sustainable pest management. Juan runs a blog where he discusses all thing ecological and related to the world of scientific publication. 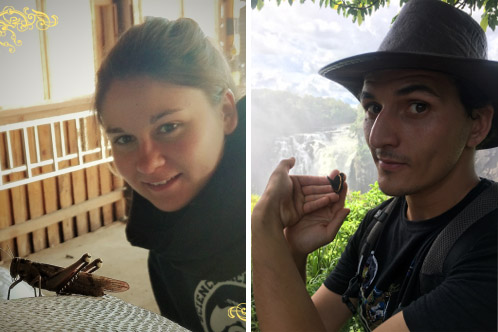 Abstract: Reproductive biology is critical to understand the invasion success of insects, and this field can make an important contribution to their management. The behavioural and chemical ecology linked to the reproductive biology of Sirex noctilio has received little attention until the last decade, and many aspects remain poorly understood. In this talk we explore these knowledge gaps with respect to visual and chemical ecology, as well as mate choice. In particular, we will discuss our work on a possible sex-aggregation pheromone, visual adaptation to low light conditions and the effect of age and size on mating success.

Joséphine Queffelec is a PhD student from FABI. Her work focuses on the influence of reproductive biology on the invasion dynamics of Sirex noctilio. She studies mating behaviours, sex determination and reproductive parasites and their effects on population dynamics.

Quentin Guignard is a PhD student from FABI. He focuses on the chemical and visual ecology of Sirex noctilio. He investigated the biology of the male pheromone and described the mechanisms underlying colour vision in the woodwasp.