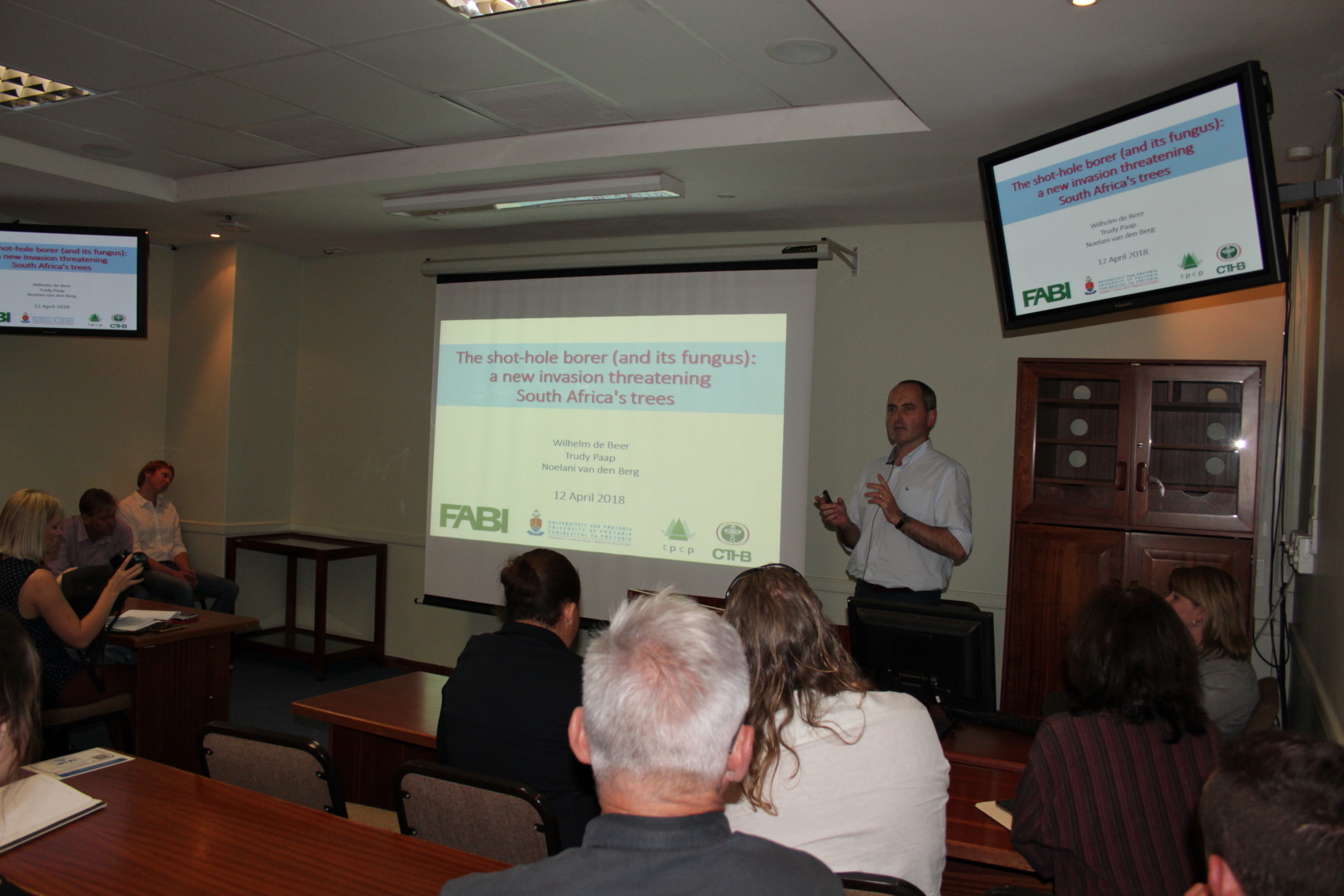 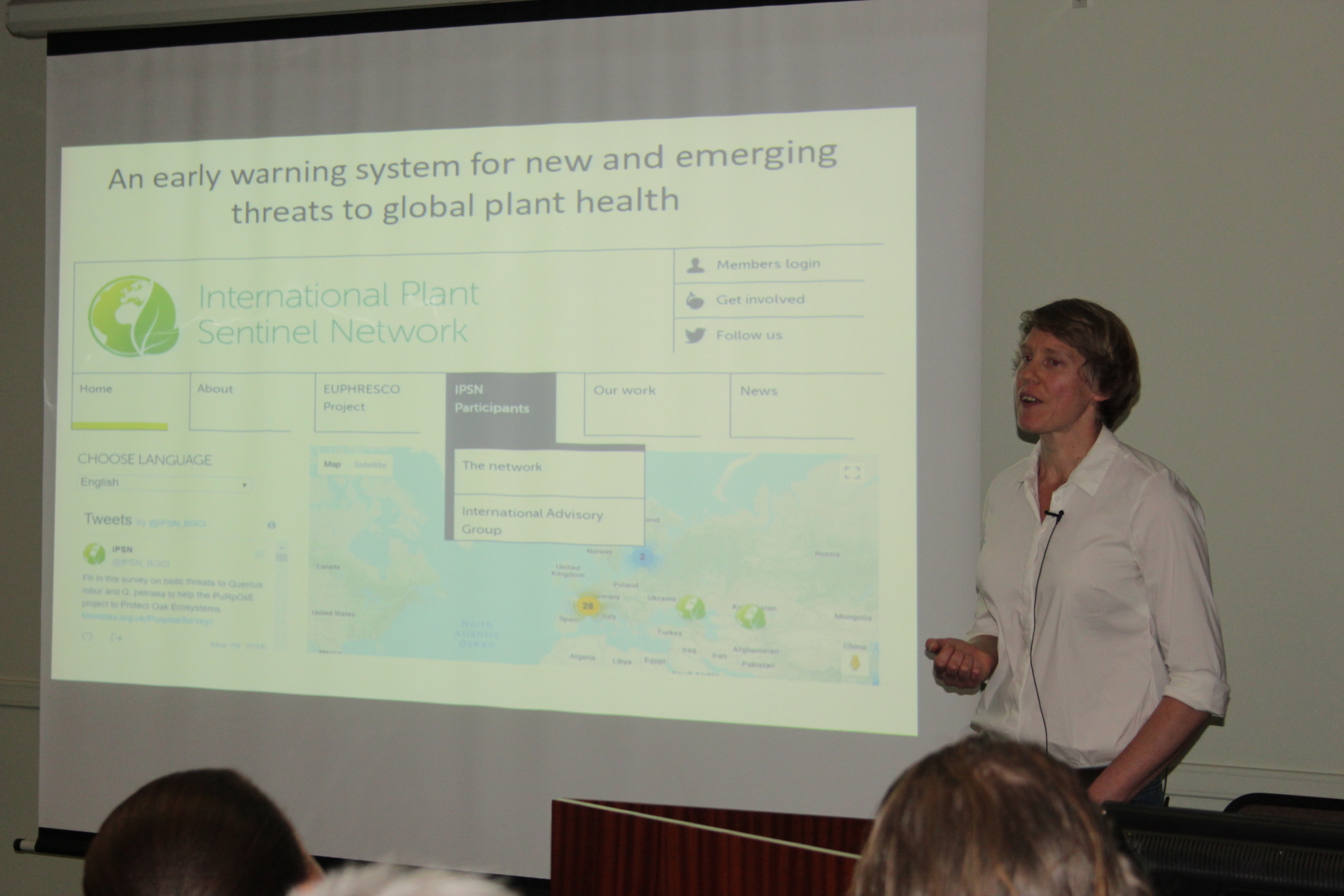 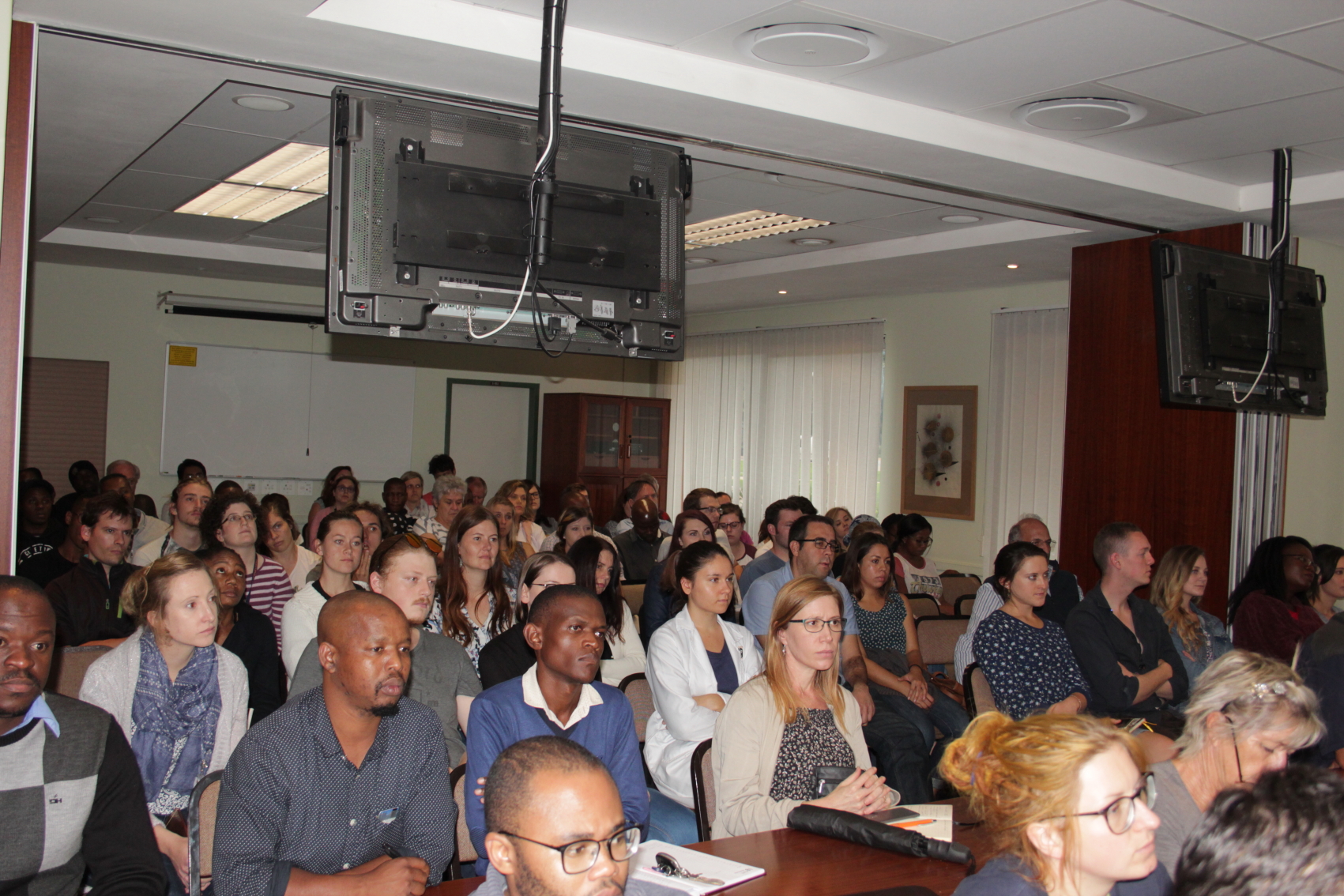 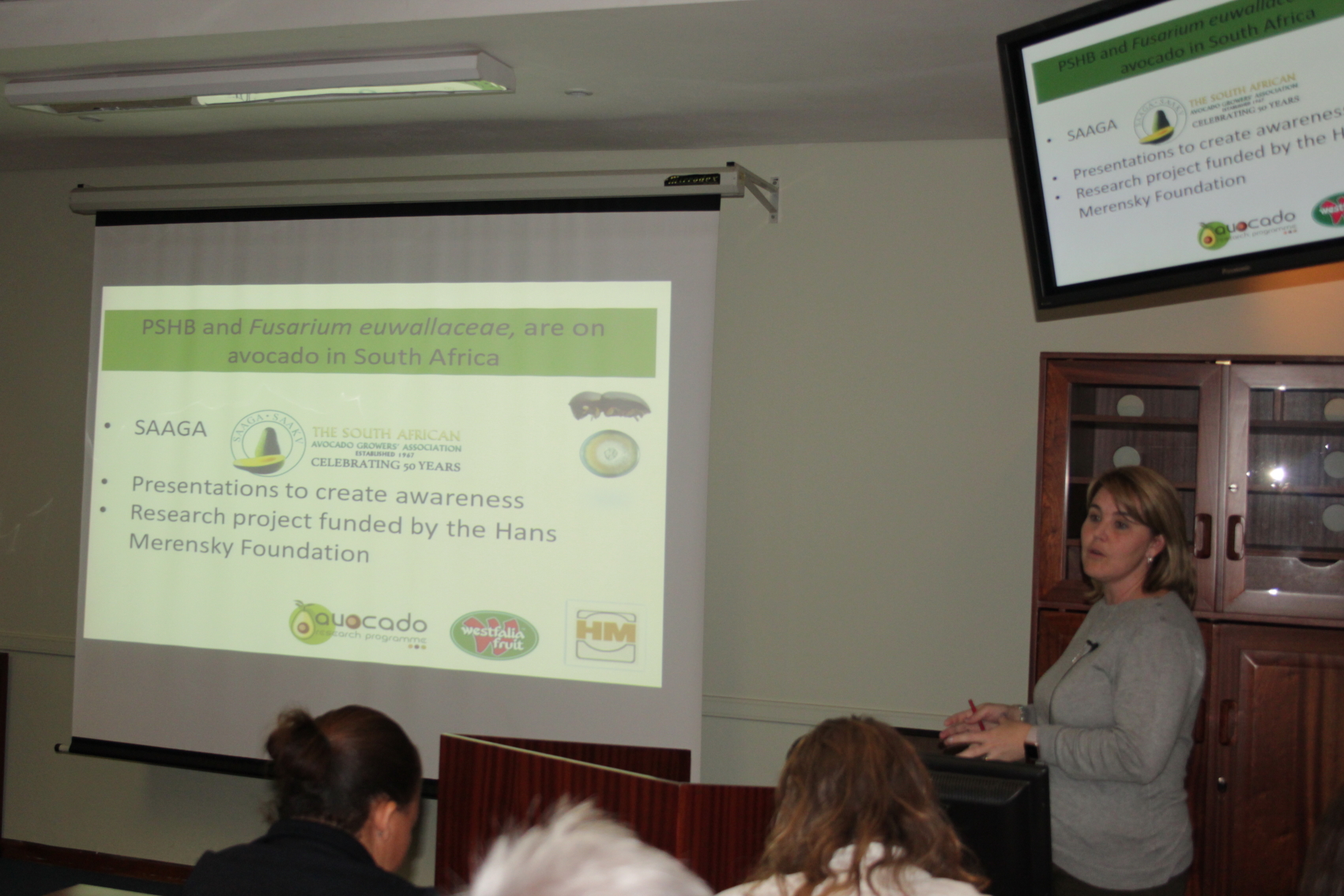 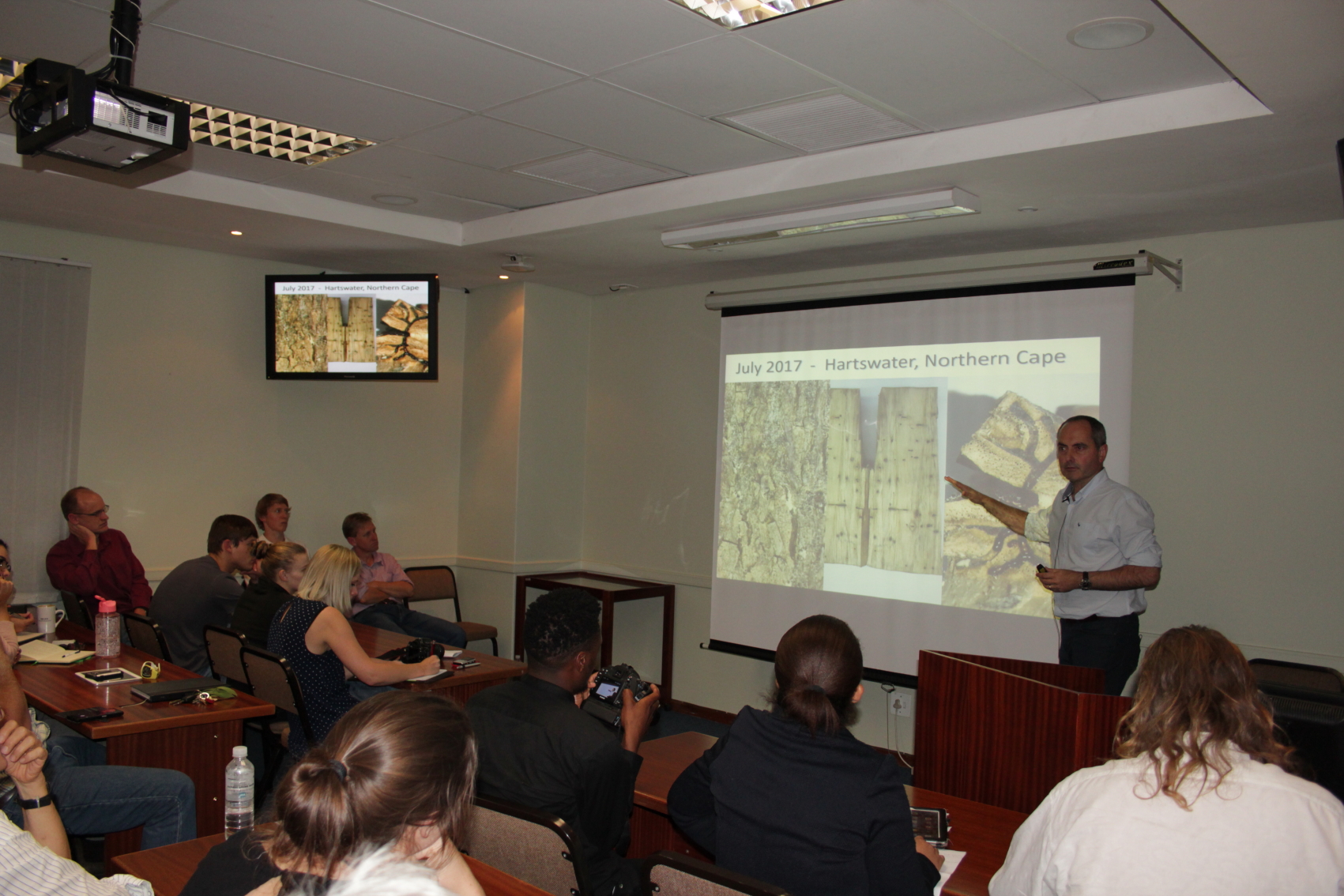 During the past few months the disastrous effect of the Polyphagous Shothole Borer (PSHB) and the fungus it carries on trees all over the country, was the topic of many news stories across South Africa. Based on requests from citizens and journalists for more information, FABI, together with the CIB (DST-NRF Centre of Excellence for Invasion Biology), hosted a public seminar on the topic. The seminar was attended by more than 120 people.

Prof. Mark Robertson welcomed the audience and provided some background on the threats that biological invasions such as the PSHB pose to natural ecosystems and agricultural and forestry crops. Prof. Wilhelm de Beer explained how ambrosia beetle-fungus symbioses work, and gave a few examples of how these organisms have impacted on forests worldwide as a result of climate change or human mediated introductions. Dr Trudy Paap told the story of how she discovered the PSHB in South Africa for the first time in early 2017. This happened during a visit to the Pietermaritzburg Botanical Garden that formed part of a Sentinal Plant Network survey for new tree pest and disease introductions. Prof. Noelani van den Berg expanded on the risks that the PSHB and its Fusarium associate poses to avocado trees based on what has happened in the avocado industries in Israel and California during the past decade.

Prof. De Beer then provided an update of the current distribution and impact of PSHB, based on the research and surveys done by FABI over the past months. Subsequent to the PSHB's discovery on London plane trees in Pietermaritzburg, it was also found on castor bean and Liquidamber trees in the area. In January 2018 its presence was confirmed in the Hartswater area on pecan and oak trees. Also in January, the FABI researchers confirmed that it has been present in the Sandton area killing several tree species, especially Chinese and Japanese maple, boxelder, and heavily infesting plane trees. In several subsequent visits to Johannesburg, it has been shown to infest more than 30 tree species in the area, including several native trees.

During April Prof. De Beer visited the George and Knysna areas, confirming that it was the same beetle and fungus that have been responsible for the death of many large oak trees in the streets of Knysna and Belvidere, as well as maples and plane trees in George. He has also found infestations of the beetle on several native trees such as Podocarpus, Virgilia and one Protea species. However, more research and monitoring is necessary to determine the impact on these native trees.

At present FABI has several research projects on various aspects of these fungi. These include continuous monitoring of its spread and host range in South Africa, determining the flying season of the beetle in the different climatic regions of the country, and investigating possible control measures.