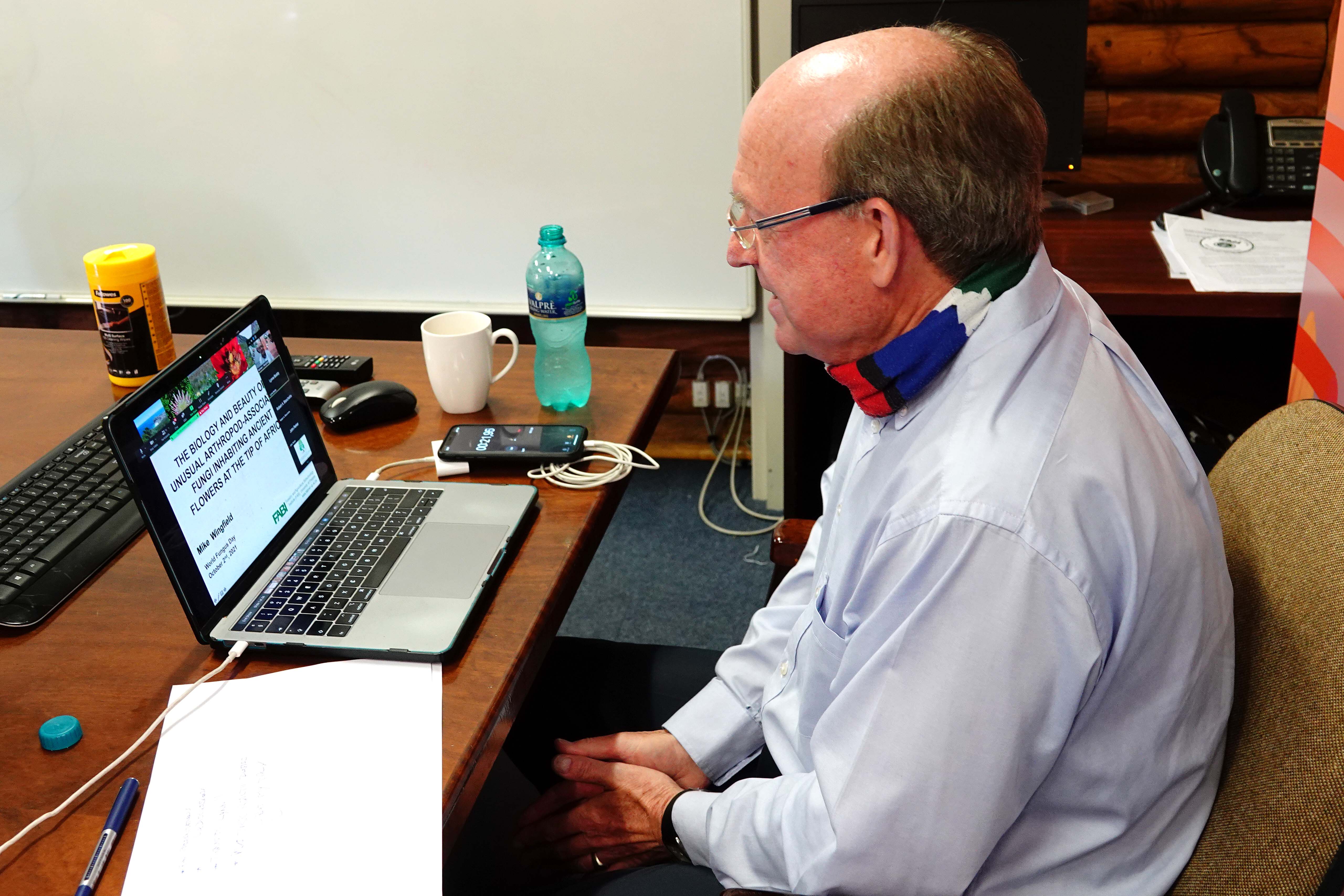 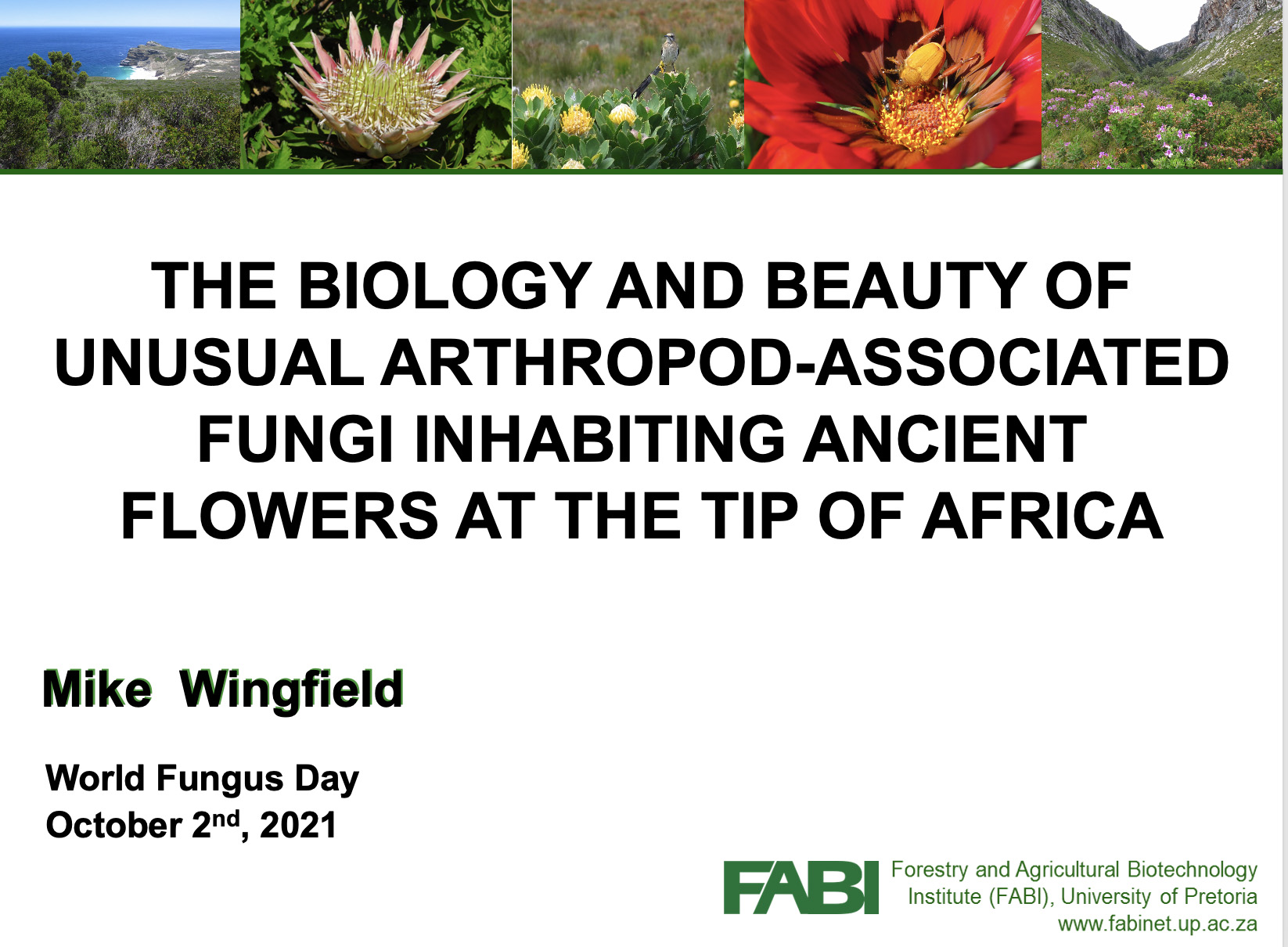 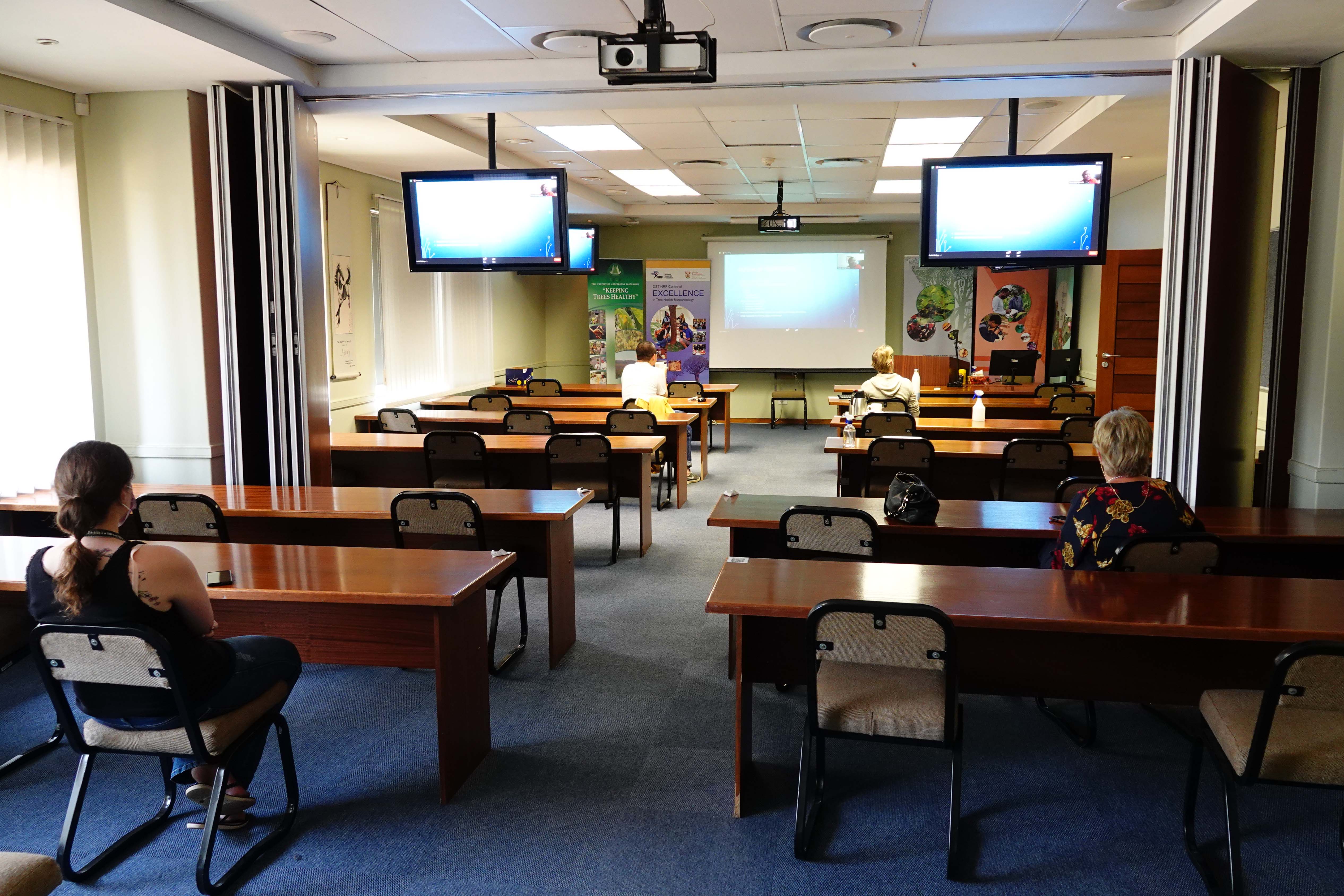 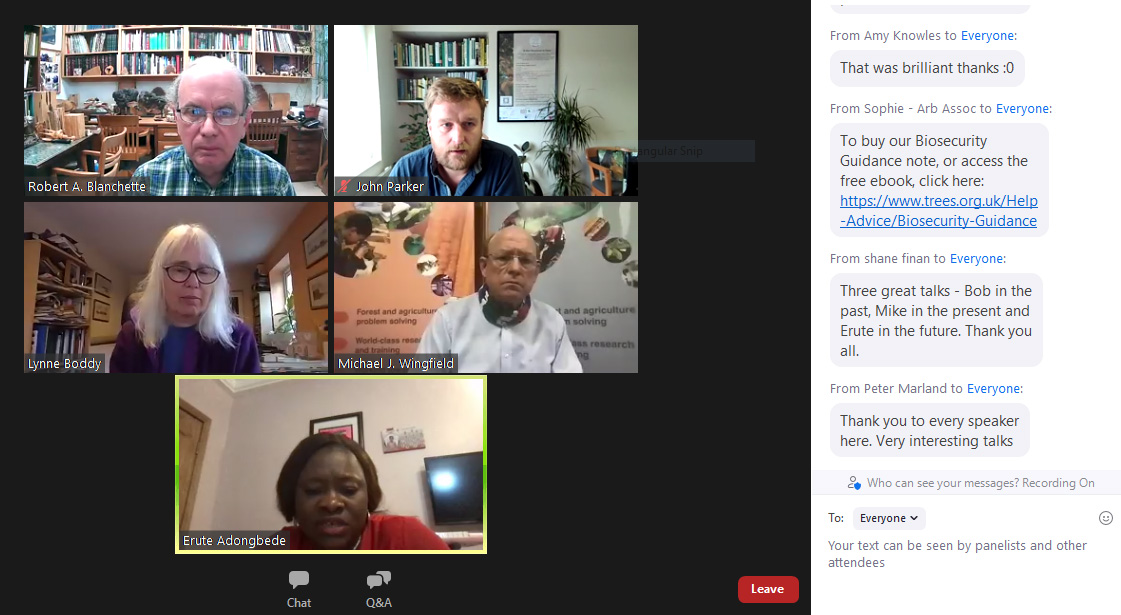 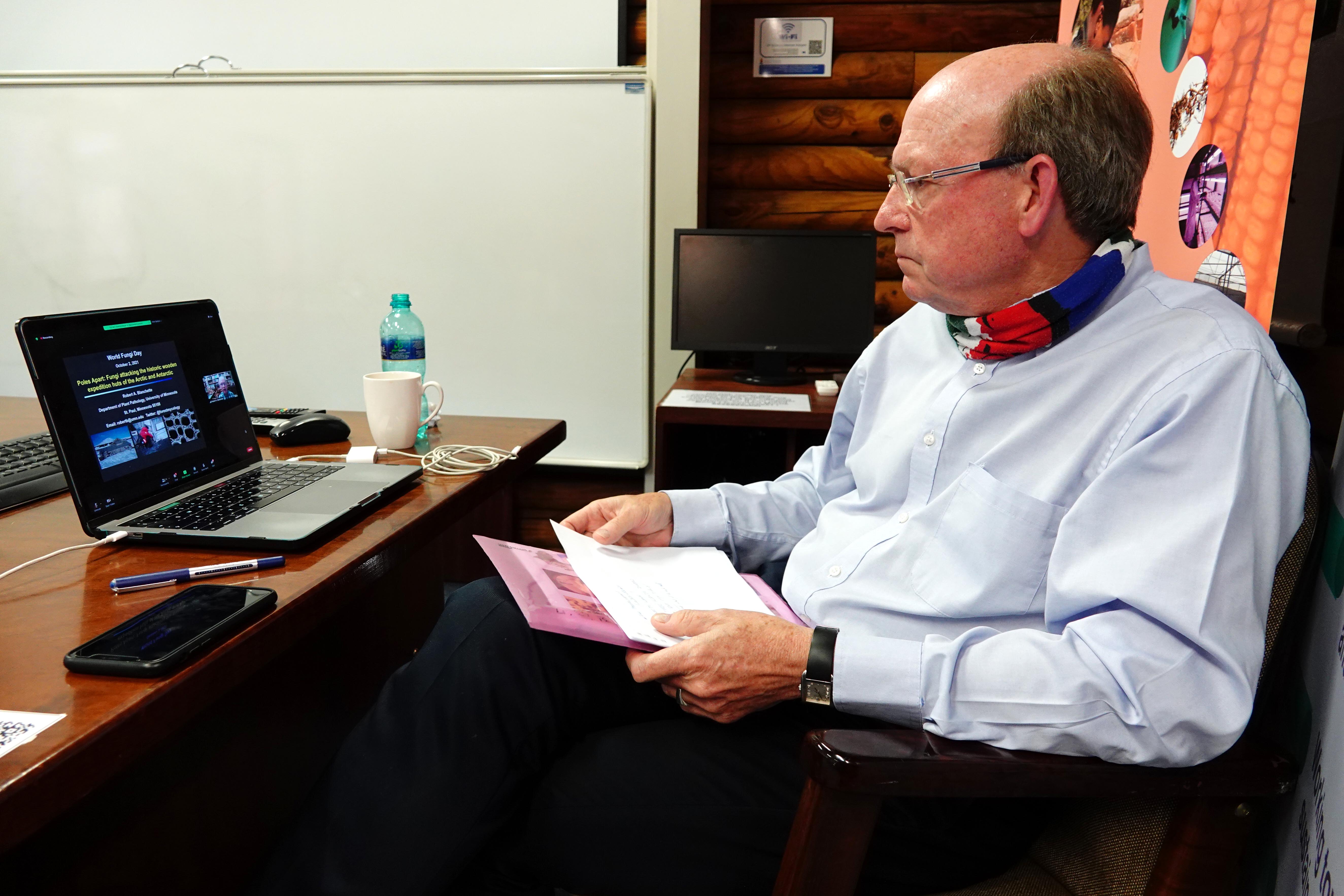 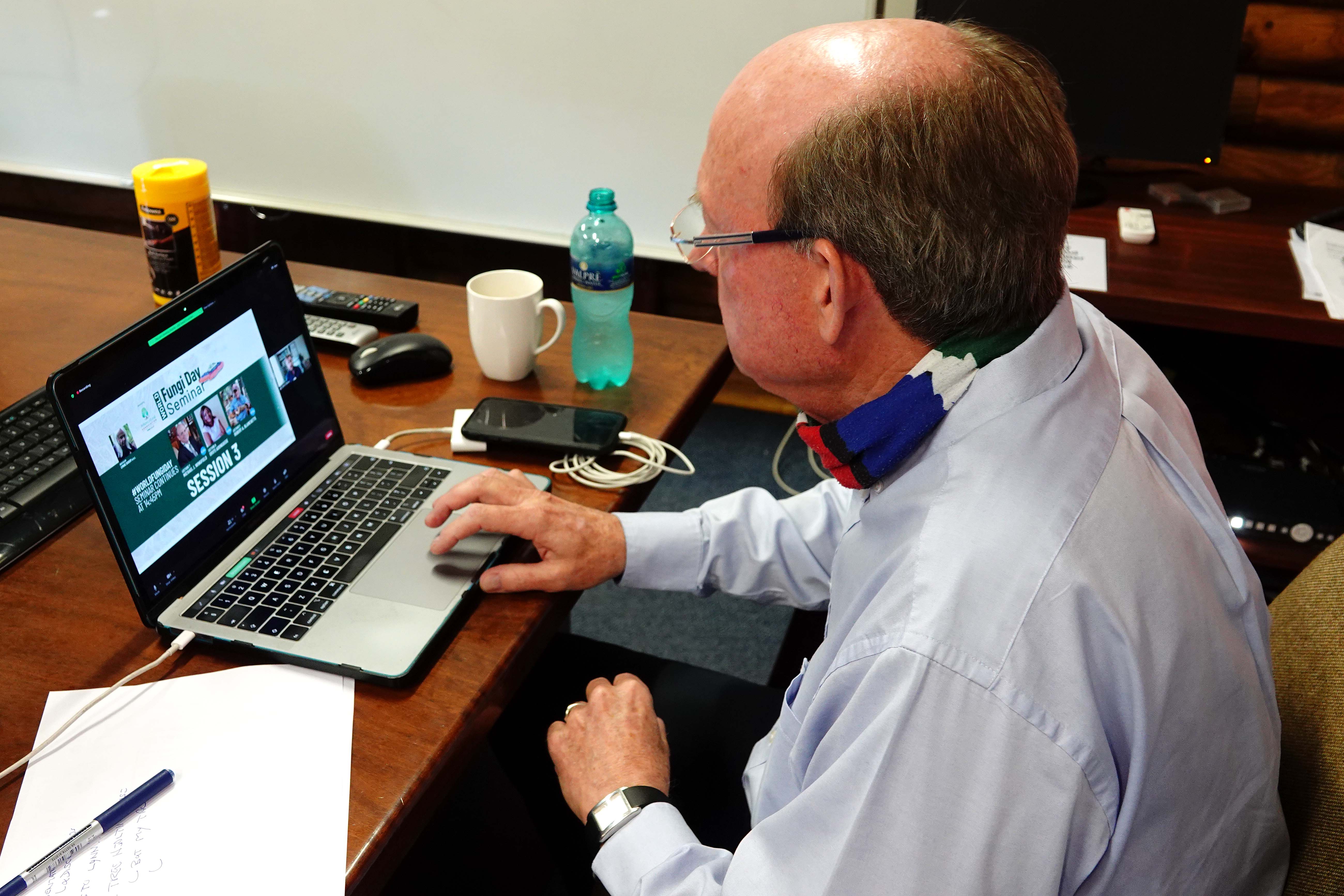 On Saturday 2 October a group of FABIans joined Prof. Mike Wingfield in celebrating World Fungi Day. This was by participating in an online event organised by the United Kingdom’s Arboricultural Association and in which Mike was one of 11 invited speakers. The speakers from South Africa, France, India, Japan, New Zealand, Nigeria, Norway, UK, and USA, presented in four sessions that spanned numerous time zones. Mike was joined at FABI for the Saturday afternoon event by Prof. Brenda Wingfield, Dr Trudy Paap, Nam Pham, Dr Wilma Nel and Morné Booij-Liewes who were able to participate in the webinar based on a separate virtual link.

Mike’s presentation “The biology and beauty of unusual arthropod-associated fungi inhabiting ancient flowers at the tip of Africa” explained the complex association of mites, insects, and birds with Ophiostomatoid fungi occurring in Protea infructesences in the Cape Floral Kingdom – the world’s smallest but most diverse plant kingdom. This research has been conducted by several MSc and PhD students that Mike has supervised during the course of some 30 years. He sketched the background to the first discovery of these fascinating fungi and explained how the various research projects has unravelled this complex association.

To FABIans, an interesting aspect of the event was that Mike’s presentation was followed by that of his PhD supervisor at the University of Minnesota, Prof. Bob Blanchette who spoke on the fascinating subject of polar fungi in his talk “Poles apart: Fungi attacking the historic wooden expedition huts of the Arctic and Antarctic”. It was fun for (at least some of) those tuned in to hear Mike and Bob tease each other against their mutual love for the fungi.