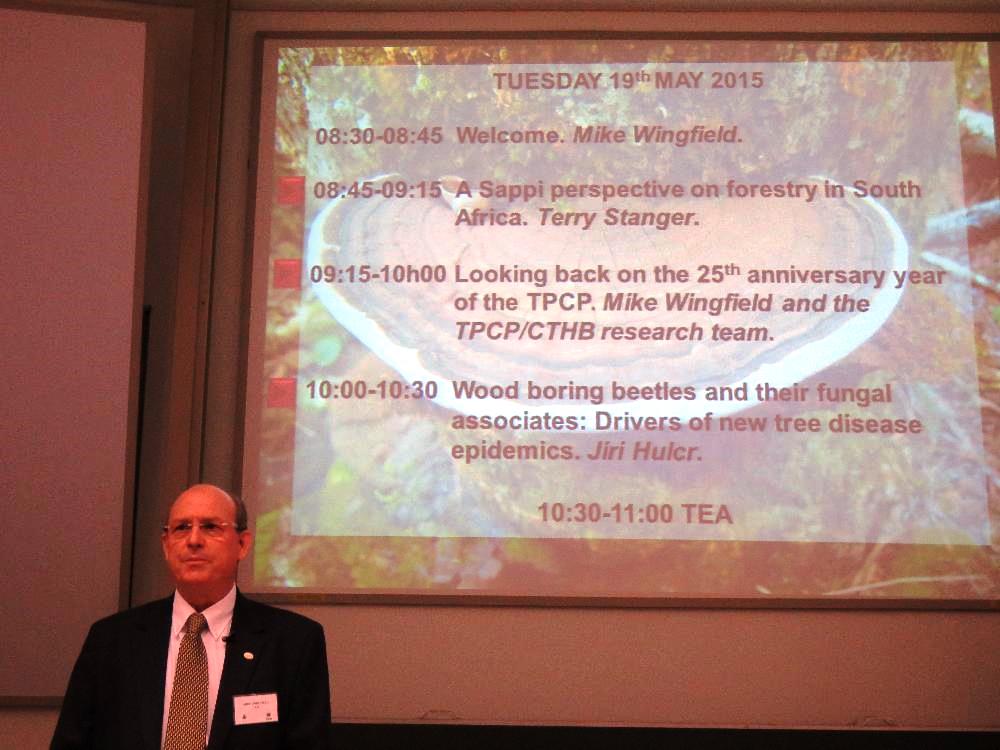 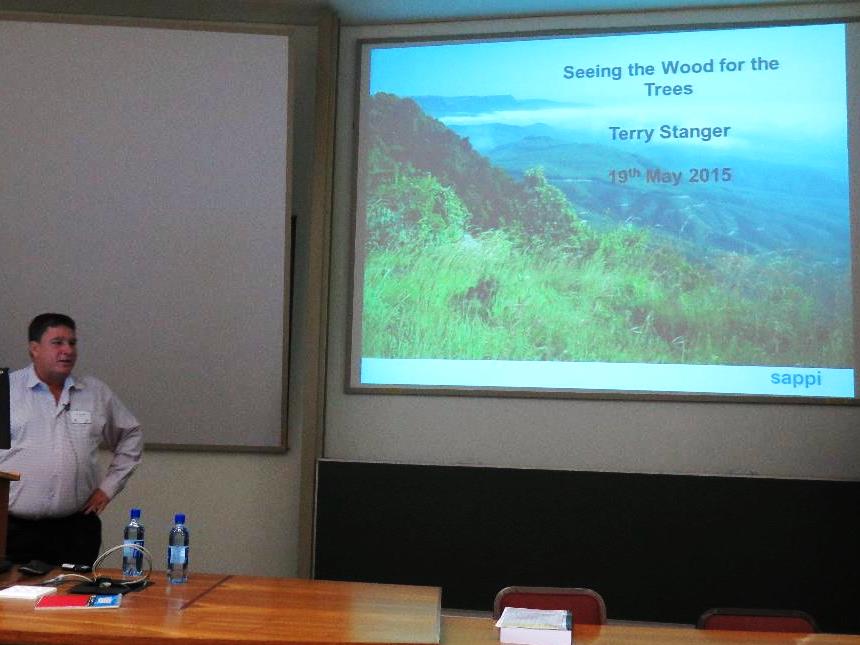 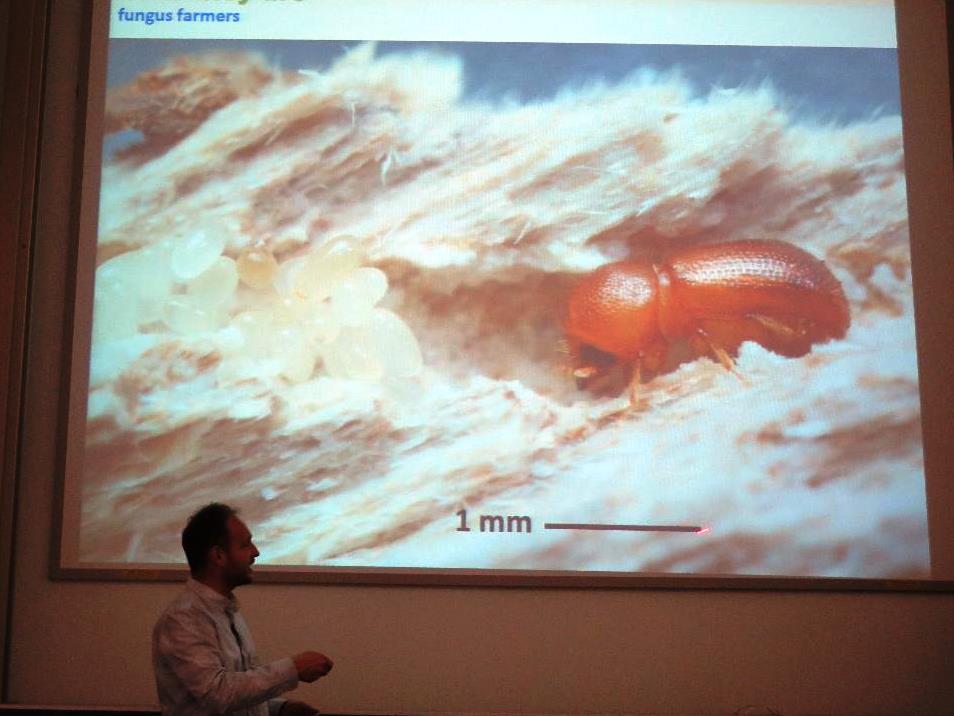 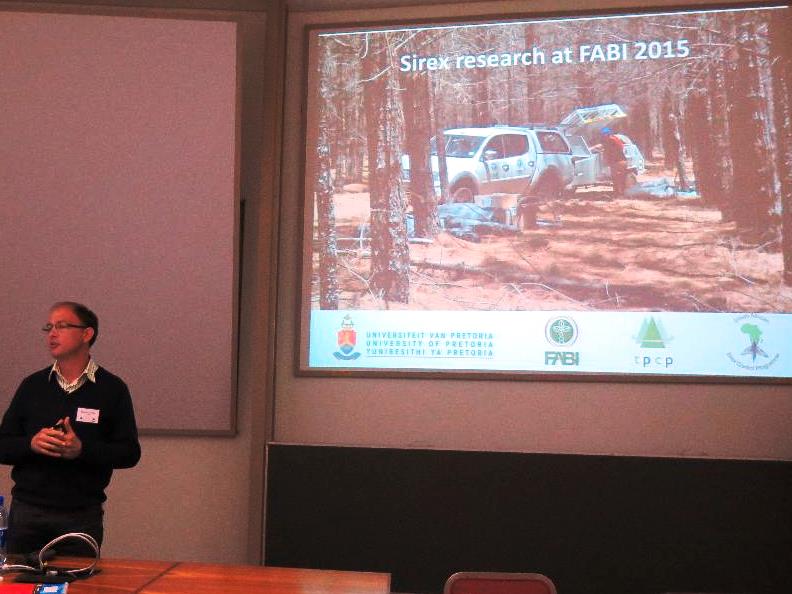 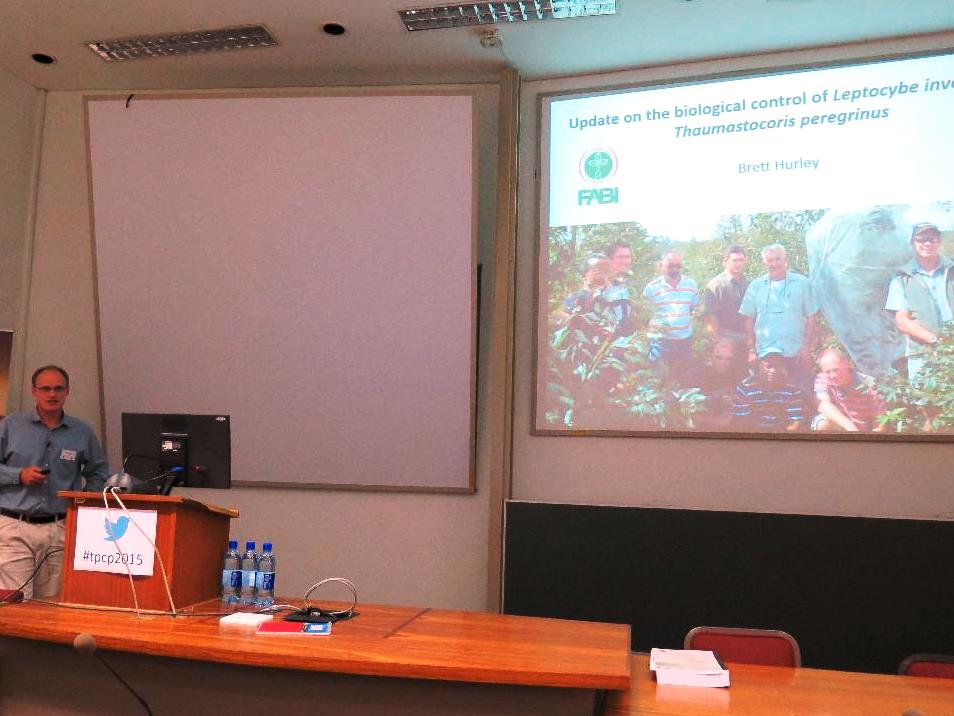 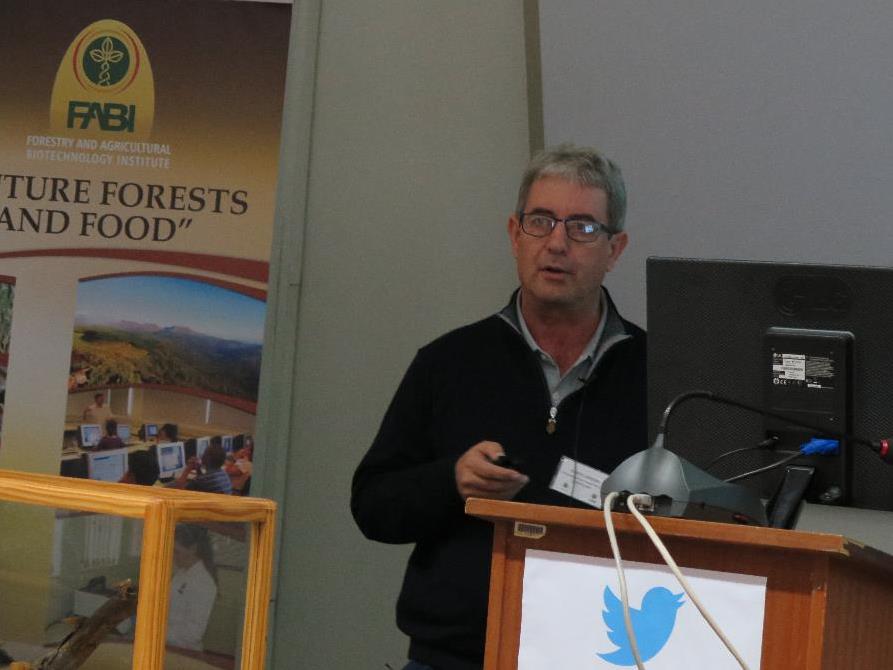 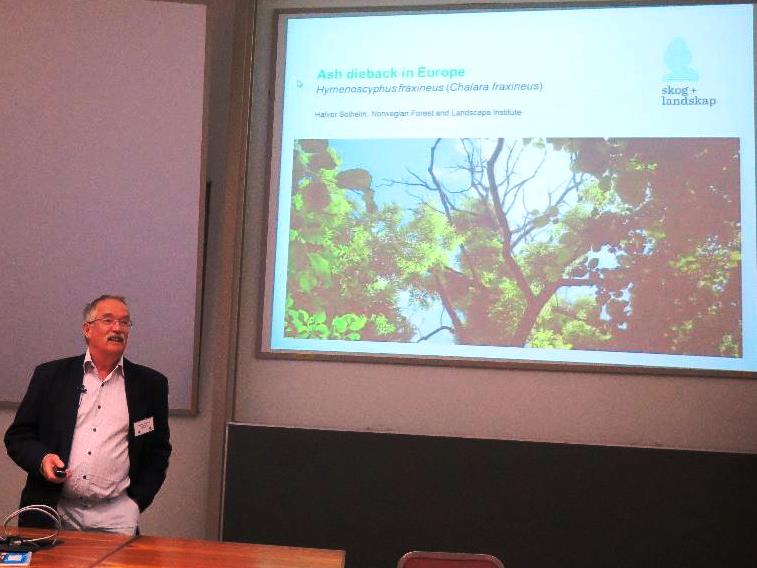 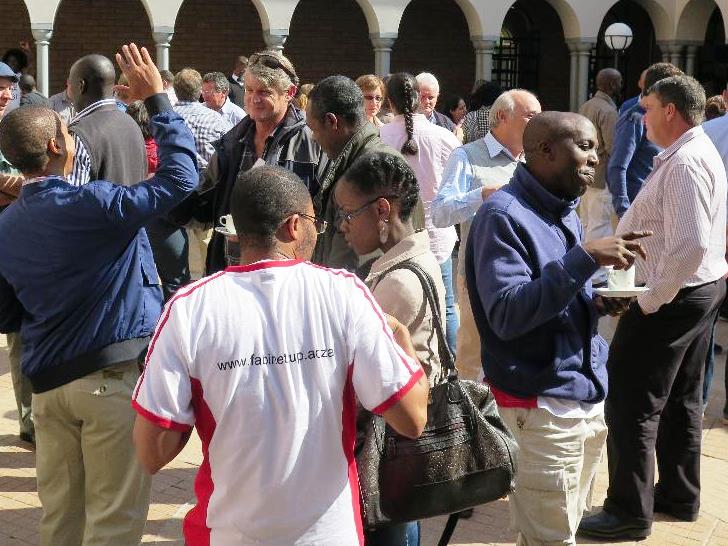 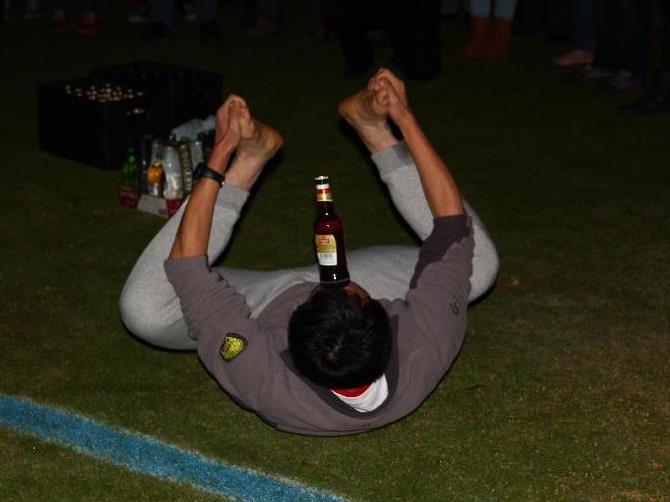 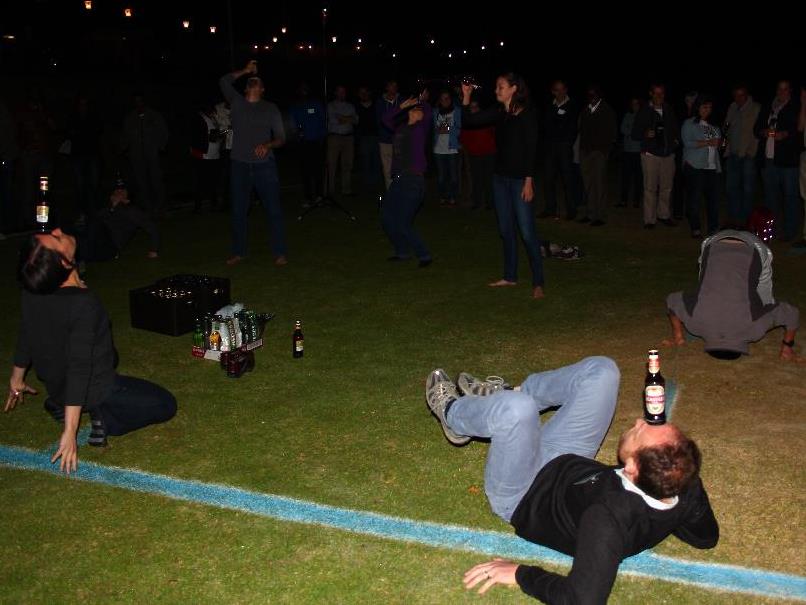 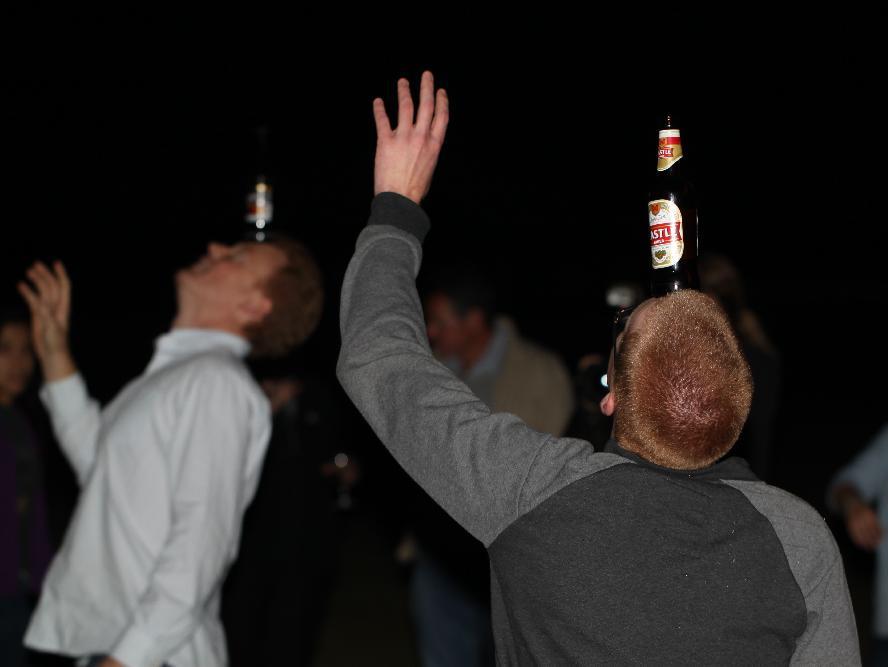 Tree health – both of native and non-native trees – depends not only on being able to predict future threats but also being able to respond rapidly to new outbreaks or introductions of pests and pathogens, attendees of the 26th Annual Meeting of the Tree Protection Co-operative Programme (TPCP) and DST/NRF Centre of Excellence in Tree Health Biotechnology (CTHB) heard today.

The meeting primarily serves as a feedback session to TPCP and CTHB stakeholders. Attendees included the Dean of the Faculty of Agriculture and Natural Sciences, Prof. Jean Lubuma, many managers and foresters of the South African forestry industry, government officials, several invited guests from abroad, academic collaborators from other universities, and FABI staff and students, whom Prof. Wingfield described as the engine room of the TPCP and the CTHB in his welcoming address.

In his address entitled Rapid change is the new normal, Terry Stanger highlighted a number of changes, including climate change, new pests and diseases, government regulations, labour relations, increases in fuel and electricity prices, and deteriorating road and rail infrastructure that Sappi and other role players in the forestry industry have to face. He said that investing in research and technology had given Sappi the edge and allowed it to compete with other global forest industry leaders, and that the company will continue to support research in future.

In an overview of highlights of the past year, Prof. Mike Wingfield said the TPCP and CTHB research teams at FABI owed their accomplishments to the fact that their research is aimed at resolving issues of tree health, and success also results from stakeholder and industry engagement, international collaborations, interaction with other Centres of Excellence (CoE) such as the Centre of Invasion Biology, and the diversity of publications locally and internationally. He also stated that during his recent involvement as IUFRO president at the United Nations Forum on Forests in New York, he realized again just how important it is that the forestry industry and forest scientists become involved in the government and legislation of forestry issues.

The lecture of Prof. Jiri Hulcr was titled “Wood boring beetles and their fungal associates: Drivers of new tree diseases”. He explained how an invasive ambrosia beetle and its fungus introduced into the USA from east Asia, has destroyed native Lauraceae trees and avocado orchards in Florida over the last few years. Thousands more such beetles exist that pose a further threat to forests and industries worldwide, but it is impossible to predict these introductions and subsequent invasions. However, the key is that we need to be prepared to act rapidly once these invasions are detected, and that is only possible if forestry stakeholders invest and build research capacity to understand the biology of these beetles and fungi.

Dr Simon Lawson from the University of the Sunshine Coast, Queensland, Australia updated delegates on the global Eucalyptus pest biological control initiative, BiCEP. BiCEP is a programme funded by the Australian government that provides coordinated, collaborative solutions for the management of eucalypt pests worldwide, assisting countries where eucalypts are grown commercially that are battling pests introduced from Australia.

Prof. Halvor Solheim spoke about the rapid spread of Ash (Fraxinus) die-back in Norway and the rest of Europe. He explained how the pathogen is spread through trade and cross-border movement of Ash seedlings. This is yet another example of the risks posed by the international trade in living plant material.

Izette Greyling and Darryl Herron respectively explained the roles of field extension and the diagnostic clinic in the TPCP. Prof. Jolanda Roux awarded certificates to the 2014 members of the Tree Diagnostic Clinic, Izette Greyling, Simone Fouche, Tanay Bose and Darryl Herron, in recognition of their outstanding work in delivering this service to the industry.

The last speaker of the day was Sally Upfold from the Institute for Commercial Forestry Research (ICFR) who spoke about the XIVth World Forestry Congress (WFC XIV), Durban 2015. Sally agreed with Mike’s statement that it is increasingly important for scientists to engage with politicians and governing bodies to ensure that informed decisions will shape legislation in the forestry sector. This international conference, held for the first time in Africa, will provide the ideal forum for such interactions and will allow a unique opportunity for scientists and politicians to share a platform and engage on forestry matters.

The day ended in the traditional dinner for all at the Tuscan BBQ. As always the highlight was the annual TPCP beer slug competition, where industry partners compete to see who can drink a bottle of beer balanced on the forehead, with touching the bottle with their hands. The competition was won for a second year in a row by Kitt Payne, Biotechnology Programme Leader of Mondi!

Click here for a complete gallery of photos of the meetings.