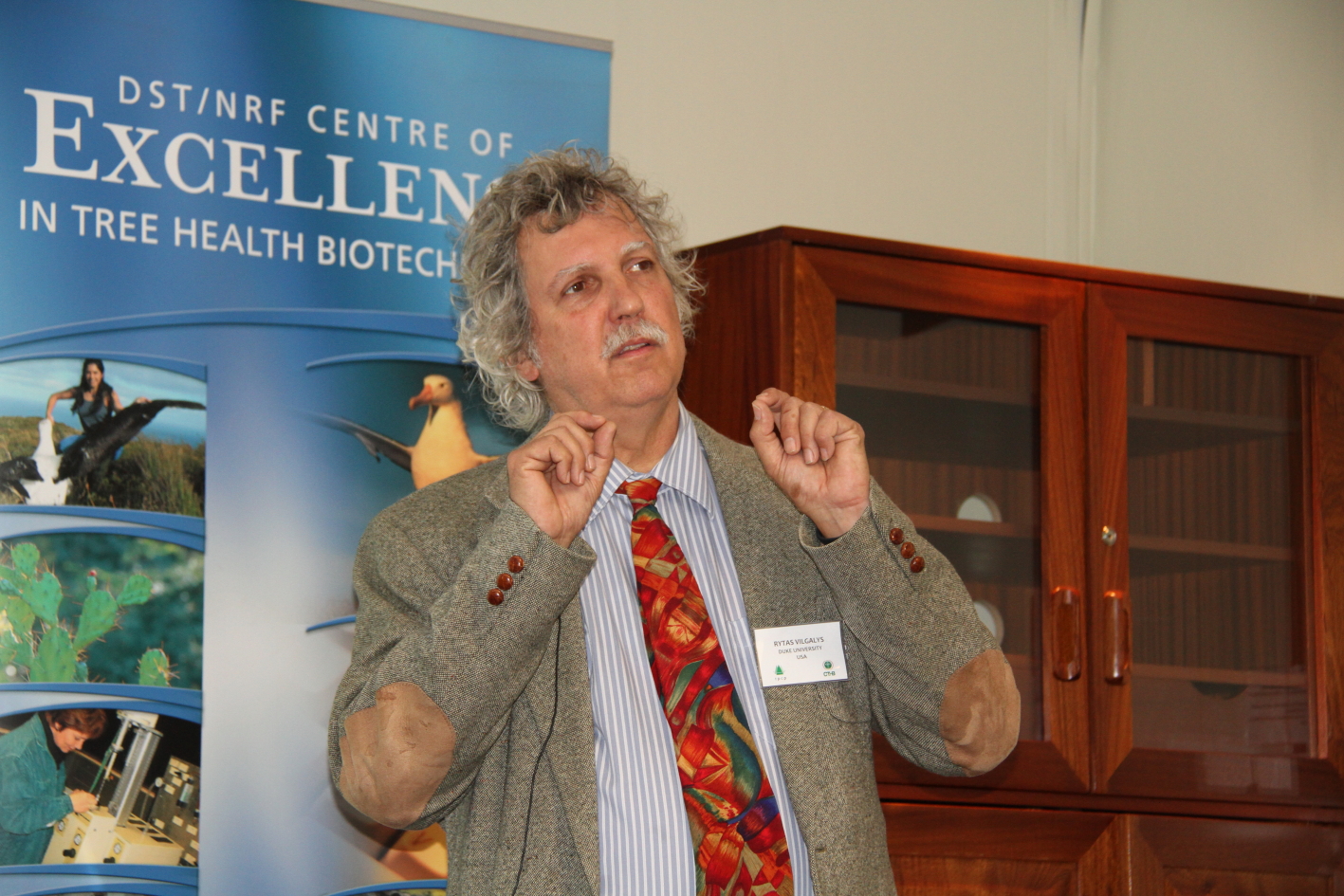 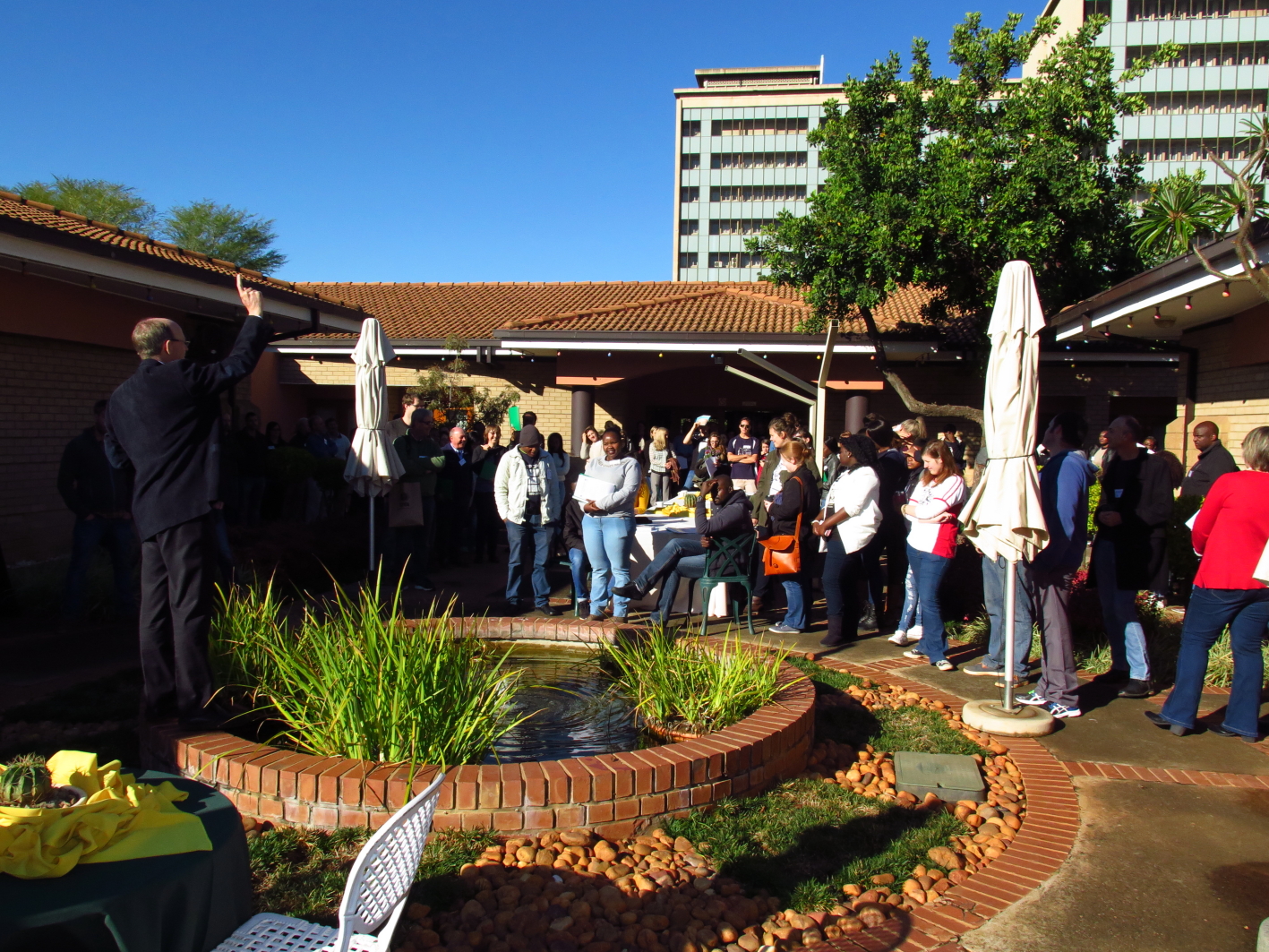 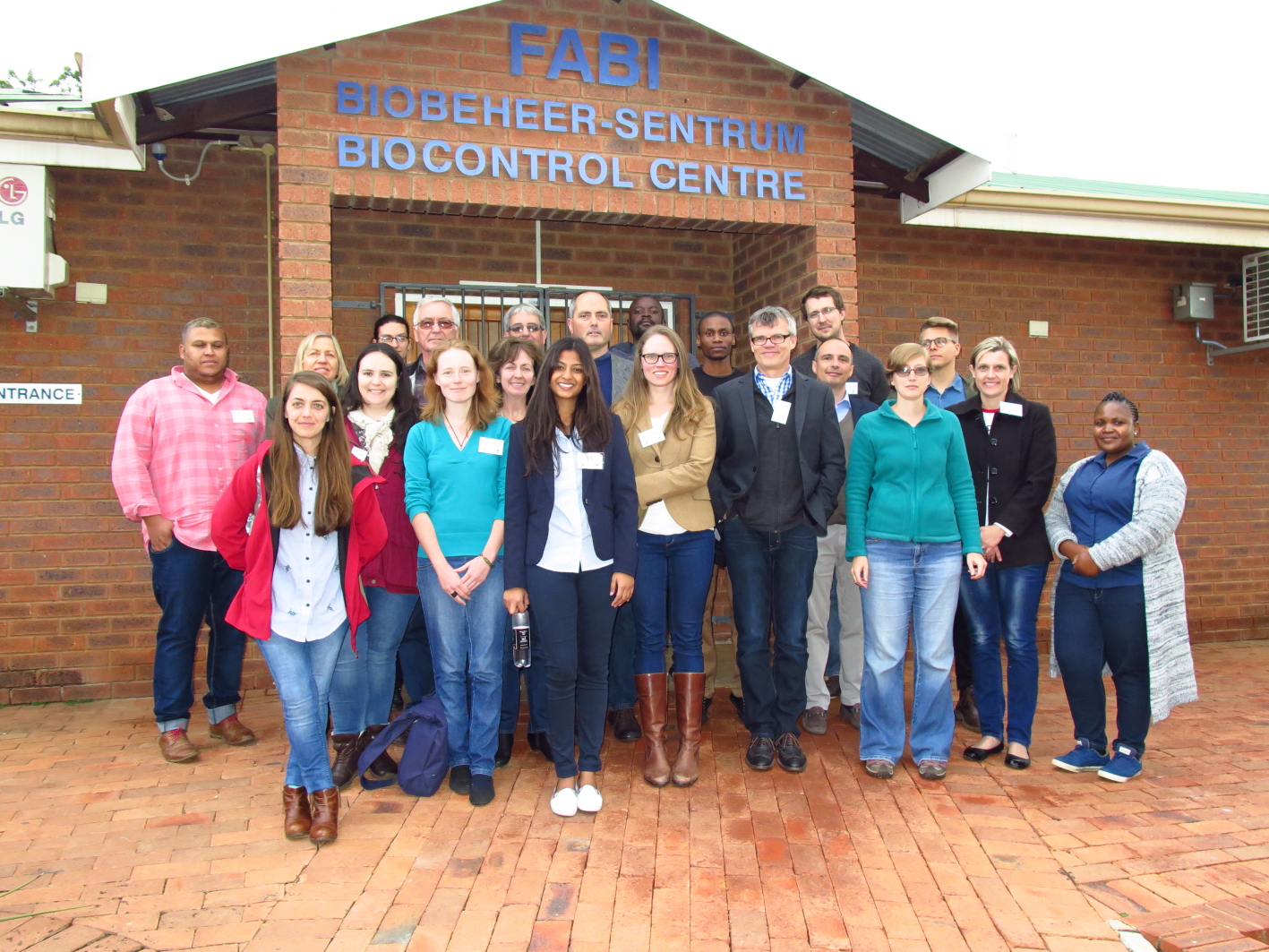 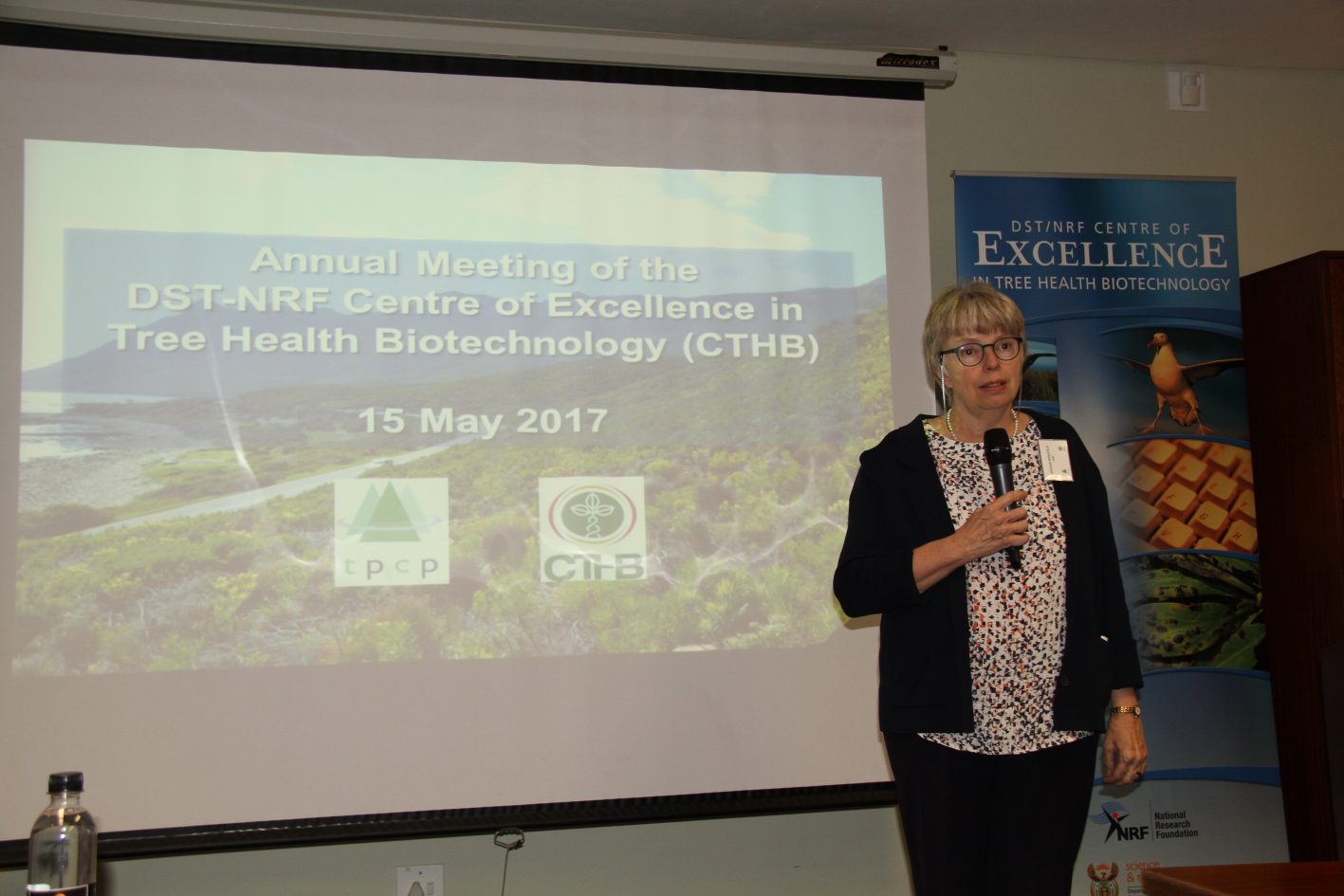 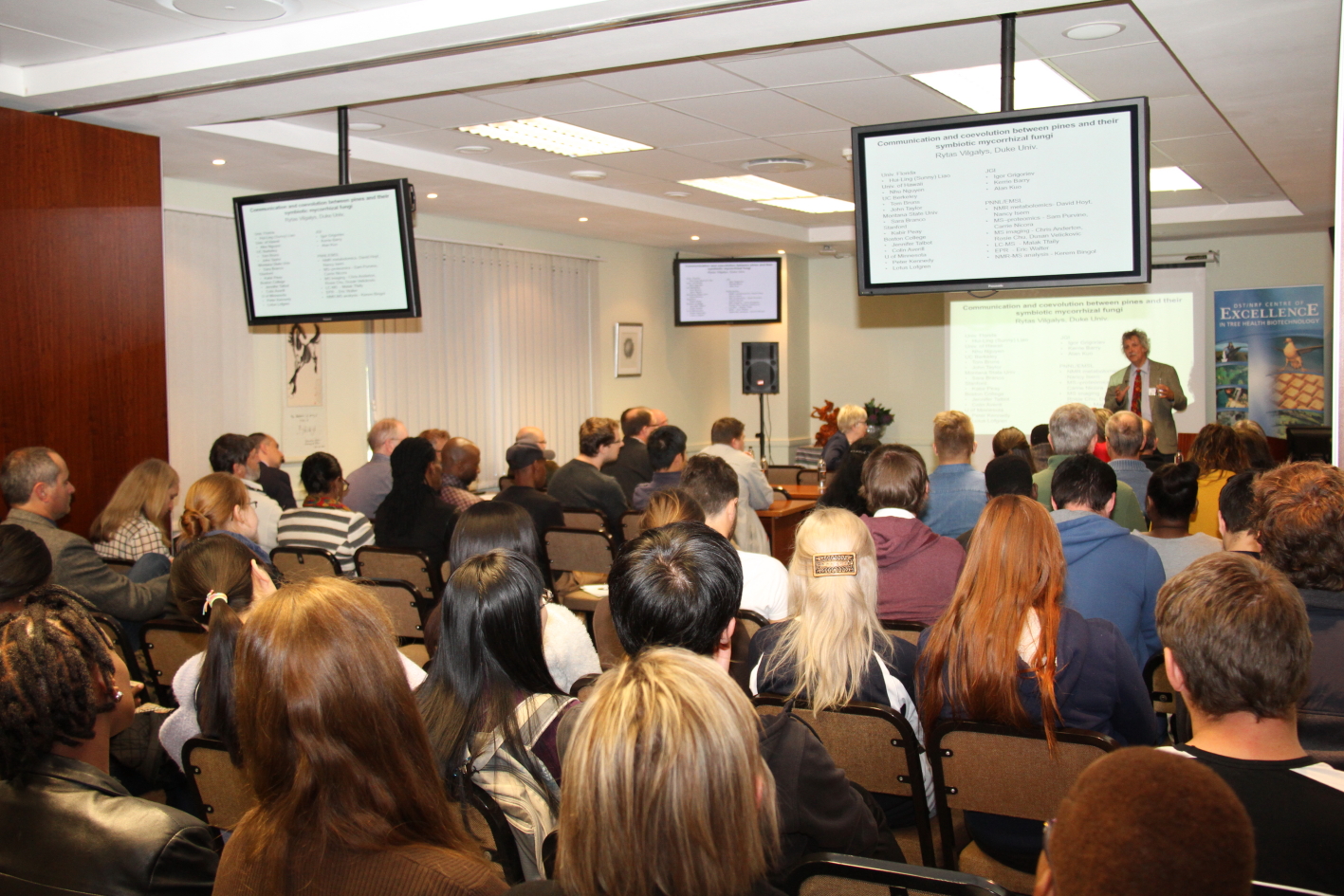 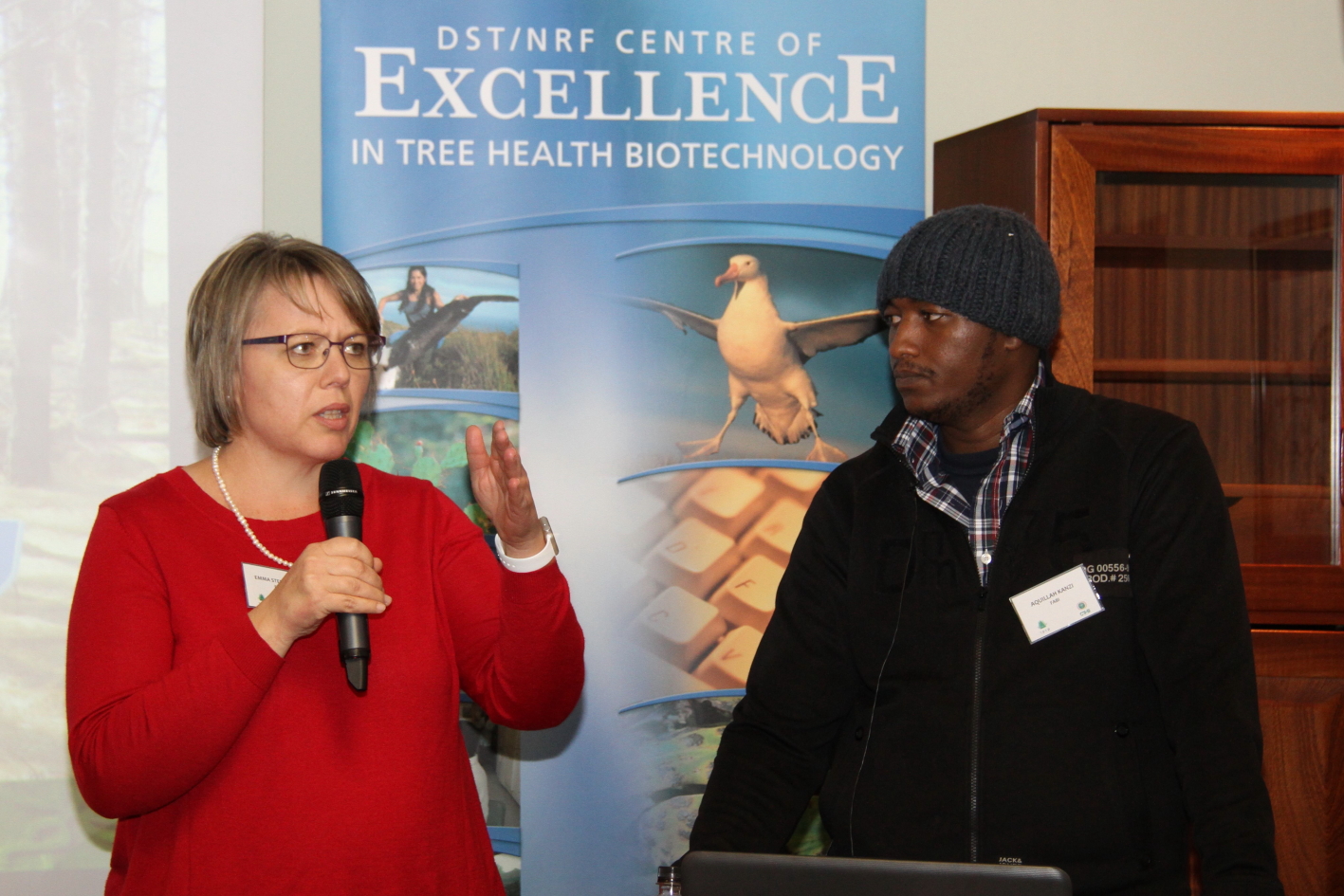 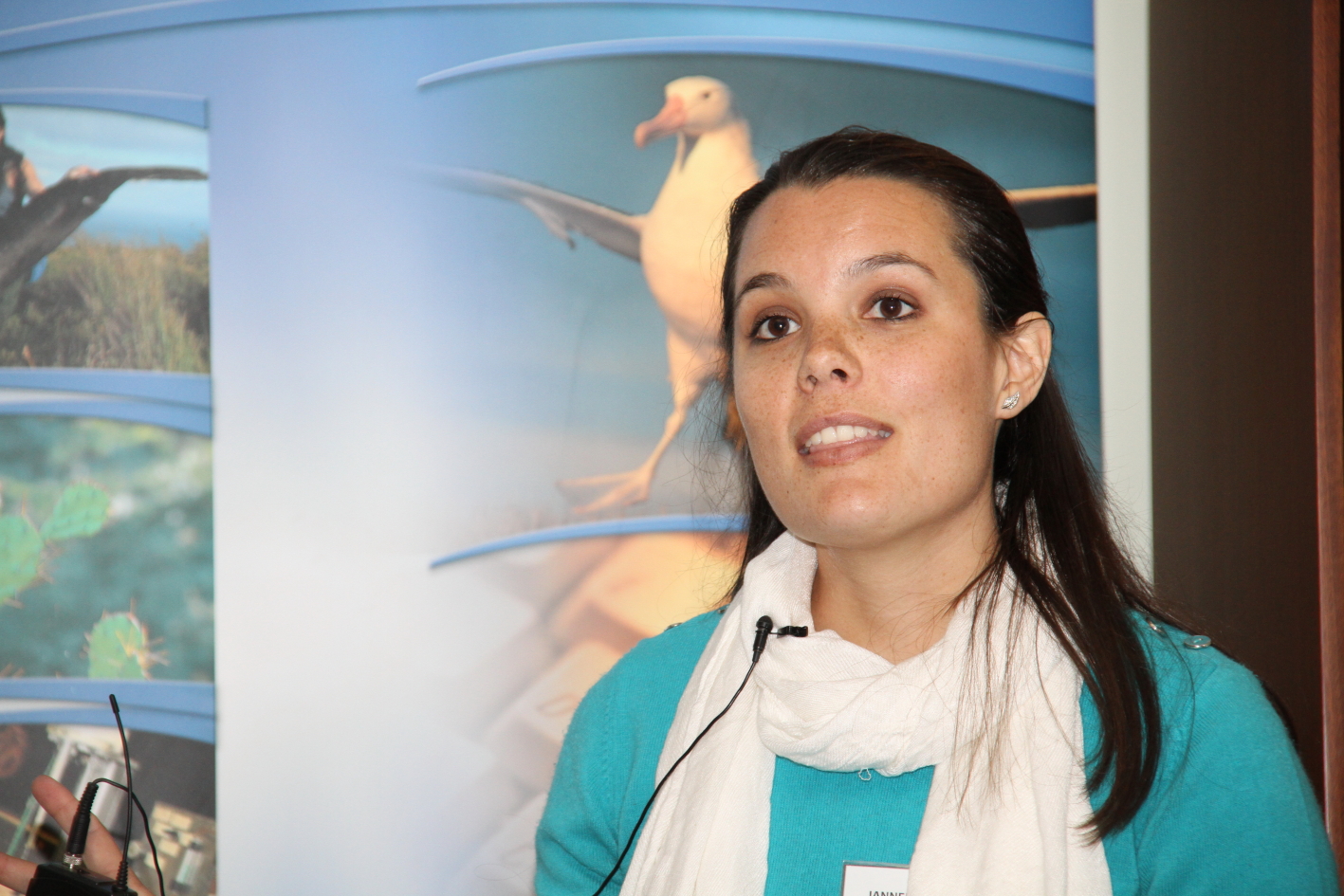 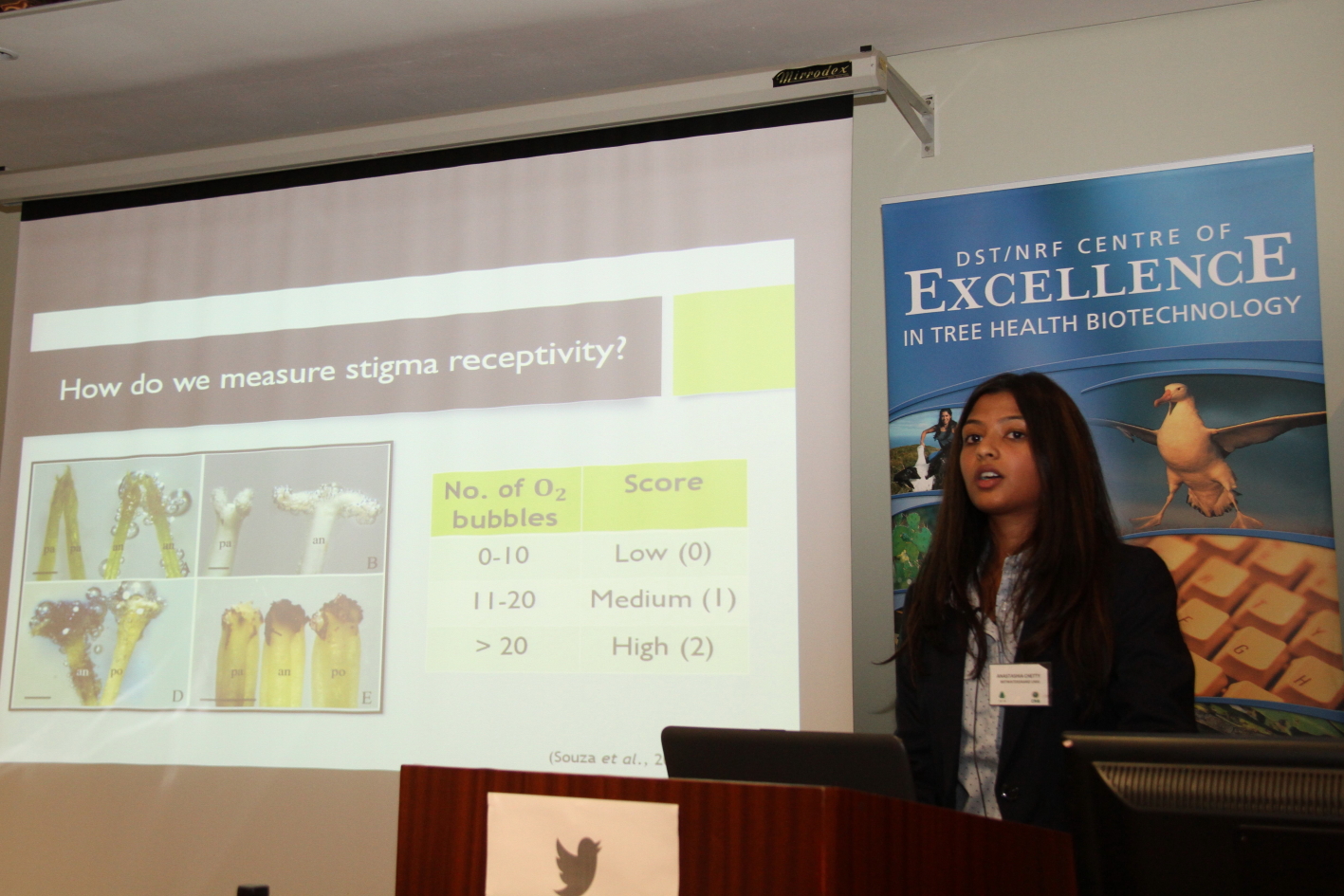 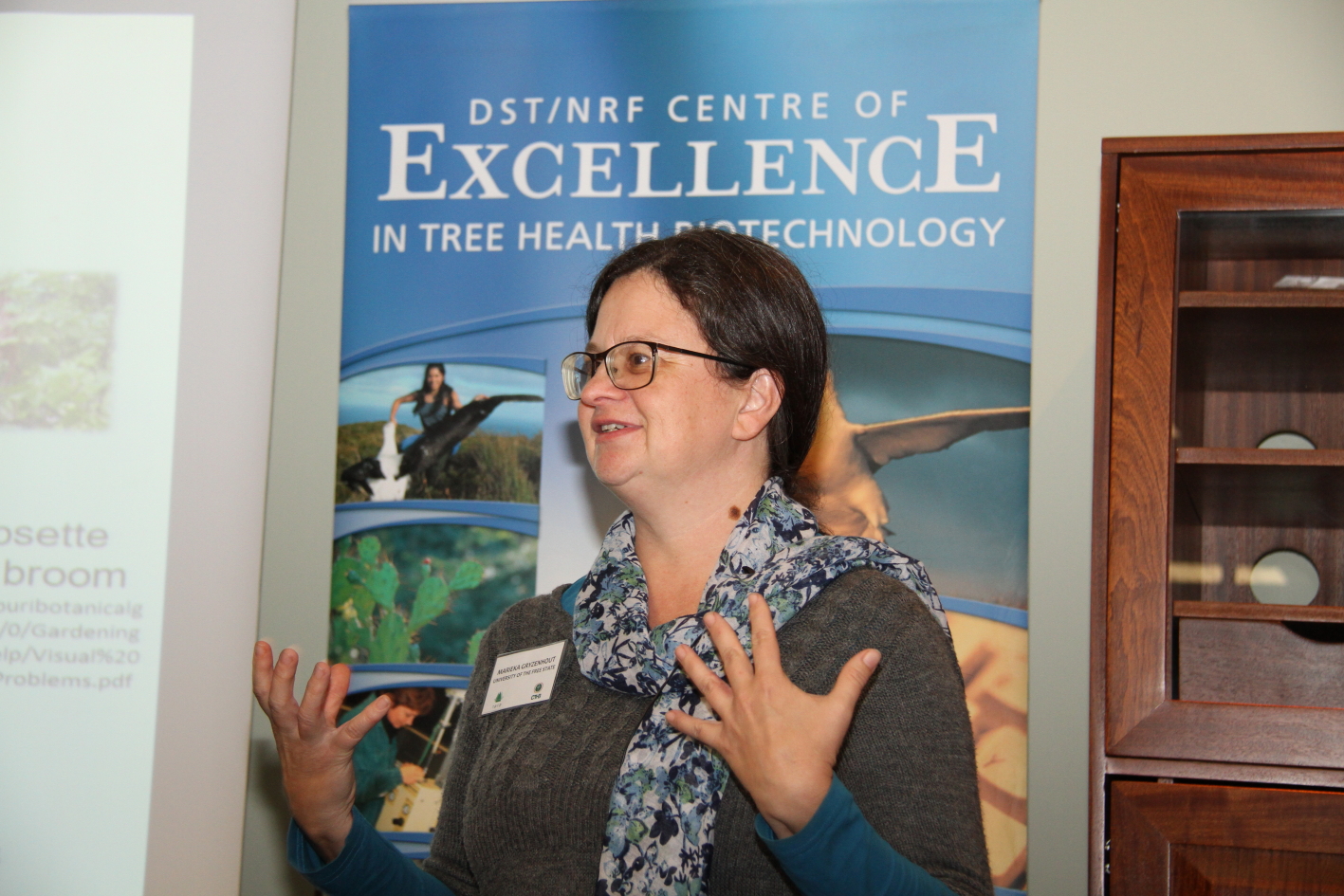 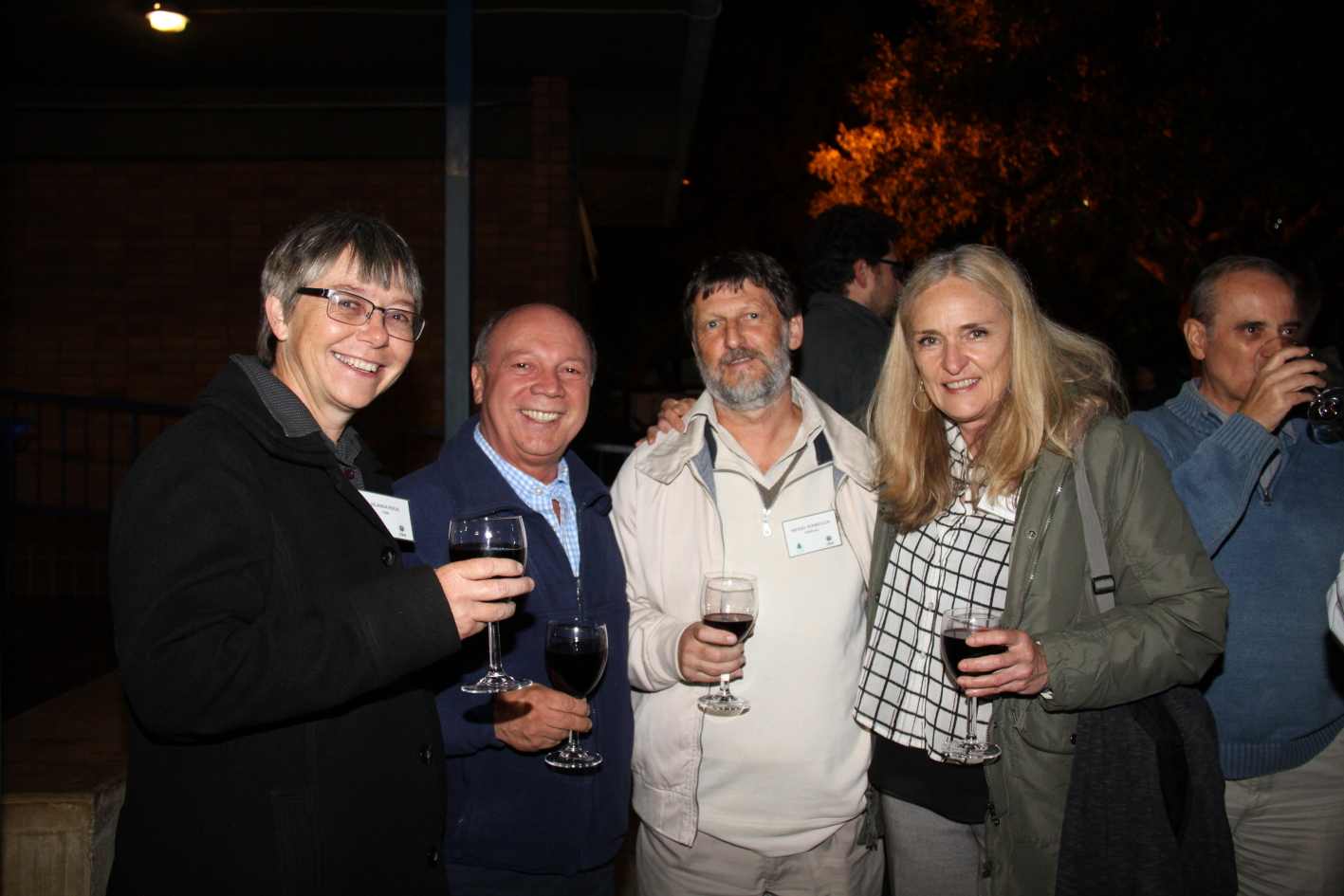 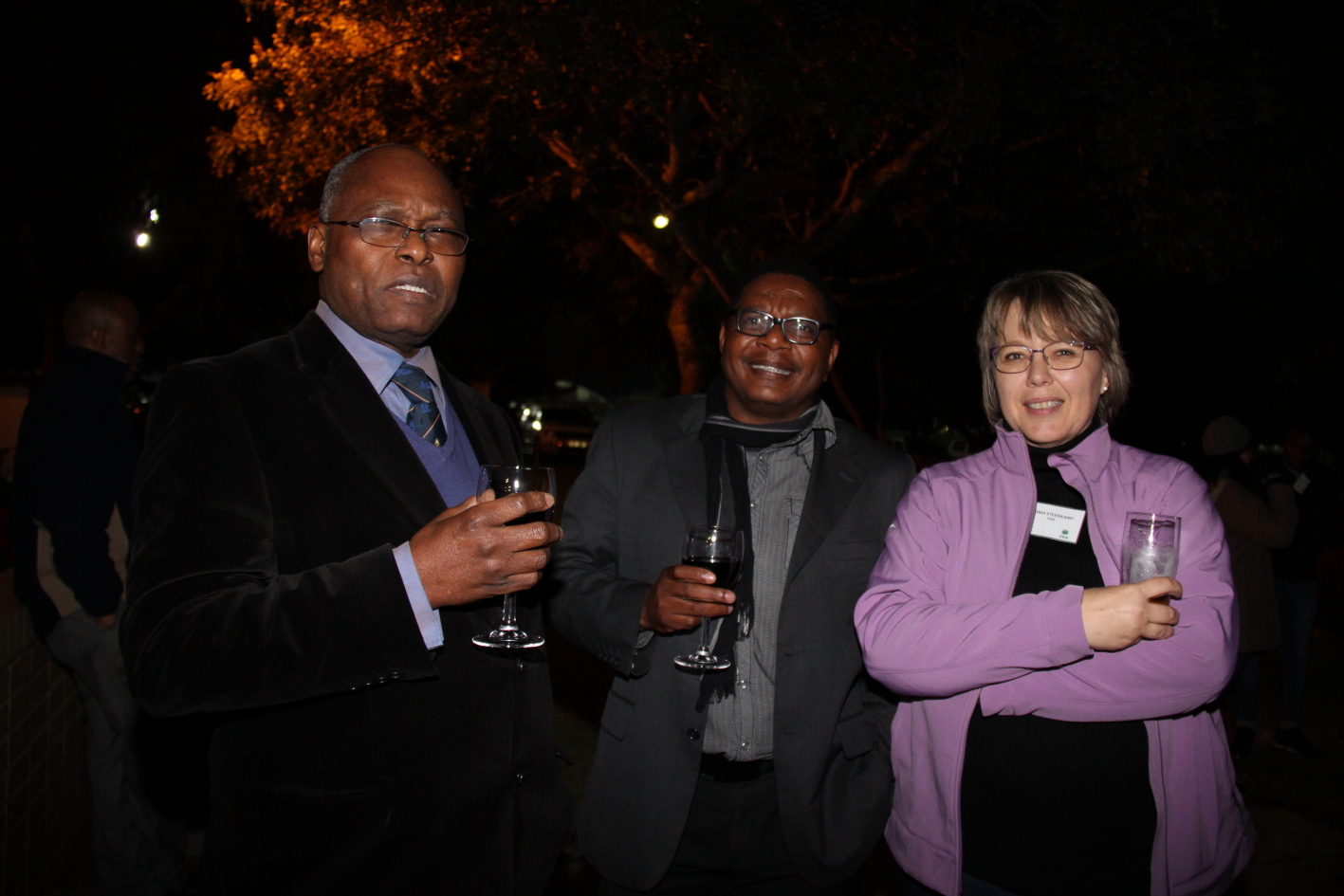 Indigenous tree health was brought under the spotlight at the annual meeting of the DST-NRF Centre of Excellence in Tree Health Biotechnology at FABI on 15 May. The meeting showcased the various research projects conducted at different universities and institutions under the banner of the CTHB. It also precedes the 28th annual symposium of the Tree Protection Co-operative Programme on 16 and 17 May.

Professor Rytas Vilgalys from Duke University in the USA opened the day’s discussions with a presentation on various fungal networks and their interactions with host plants in his “Communication and coevolution between forest trees with their symbiotic fungi”. Prof. Vilgalys explored the beneficial role of some fungal species such as ectomycorrhizae in nutrient exchange in some Pinus species.

Robert Mueller, a PhD student at Western Sydney University in Australia, discussed the relationship between ambrosia beetles and fungi in his talk “Fungal farming in the eusocial ambrosia beetle Austroplatypus incompertus attacking Eucalyptus in Australia”.

Nombuso Ngubane of the University of Stellenbosch presented the first in a series of discussions on Protea species with highlights from her MSc research in her presentation “Population genetics of the Sporothrix splendens complex in Protea infructescences in South Africa”. Her research touched on the role that birds play as secondary vectors in the dispersal of fungi in the complex across long distances and the description of new species, Sporothrix nsini and Sporothrix smangaliso. Dr Janneke Aylward reflected on her postdoctoral study on the “Contrasts in carbon metabolism in saprotrophic and pathogenic Microascalean fungi from Protea trees”. In his presentation “The bacteria diversity in the infructescences of Protea repens and the surrounding environment”, FABI PhD student Zander Human touched on the possible role of bacterial communities in the protection of Protea repens seeds cones against pathogens.

MSc student from the University of the Witwatersrand, Anastashia Chetty, spoke about factors that drive differences in fruit production of the African baobab, Adansonia digitata. This was followed by a discussion by Dr Elsie Cruywagen of the University of Pretoria on the “Population structure and diversity of Lasiodiplodia mahajangana from baobab trees in Africa and Australia”. Though Cameroon has been found to have the most distinct populations of the fungus, the highest genetic diversity has been found in South Africa. Because there are no known insect vectors (the fungus is dispersed mostly by wind and rain across short distances), human movement is most likely the source of dispersal across countries and continents, suggested Dr Cruywagen.

Dr Marieka Gryzenhout summarised the work done by students at the University of the Free State on diseases causing deformations on native tree species Searsia lancea and Valchelia erioloba in her presentation “Deformation-type diseases of two native trees in South Africa”. The study seeks to elucidate the organisms that alter the appearance of these trees.

Zama Ndovela, PhD candidate at the University of Stellenbosch closed the session with an exploration of the effect of Phosphate deficiency in modulating Nitrogen metabolism in the legume Virgilia divaricata. His talk was titled: “Do N2 fixing bacterial partners affect growth and C allocation of legume trees during P stress”.