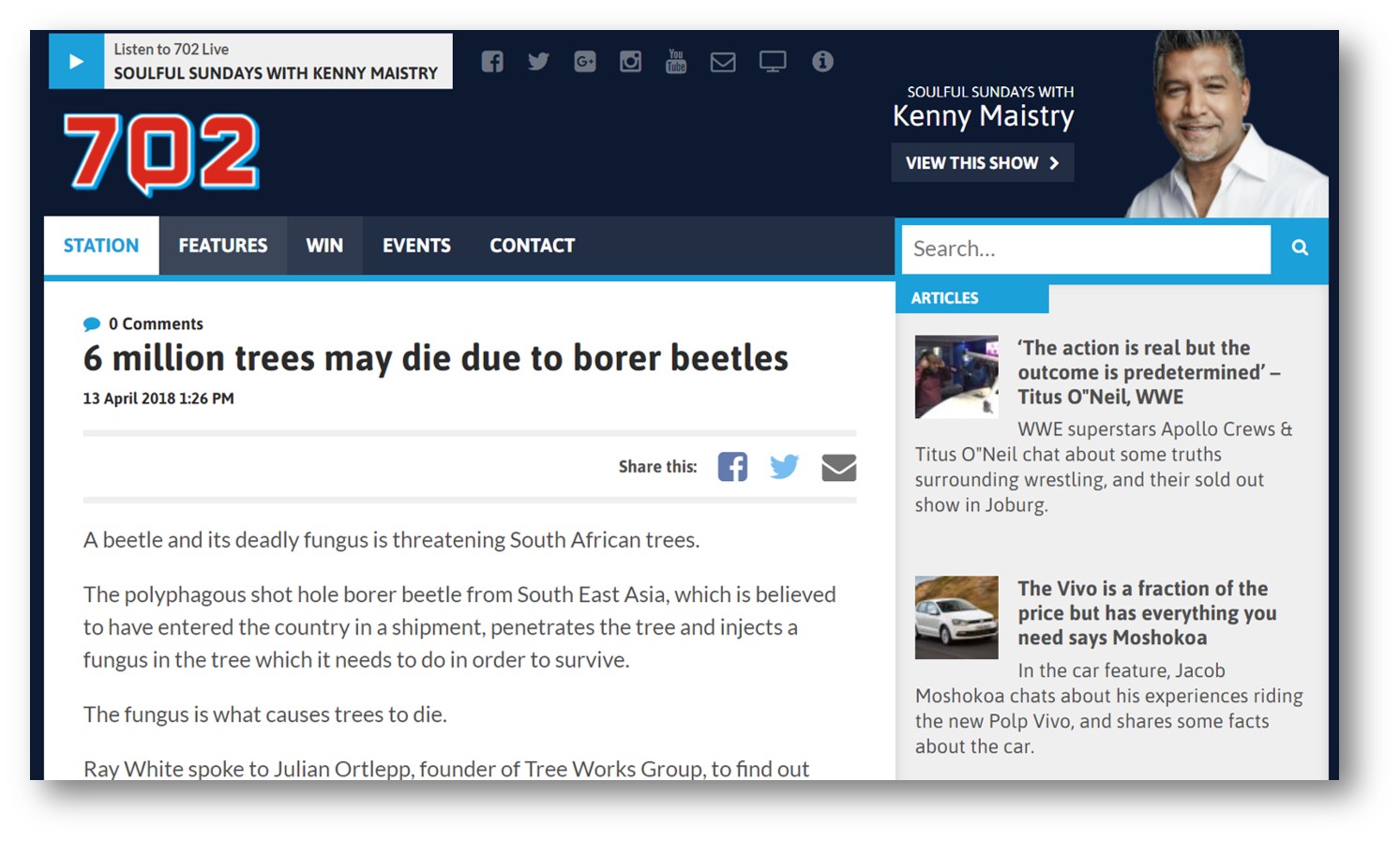 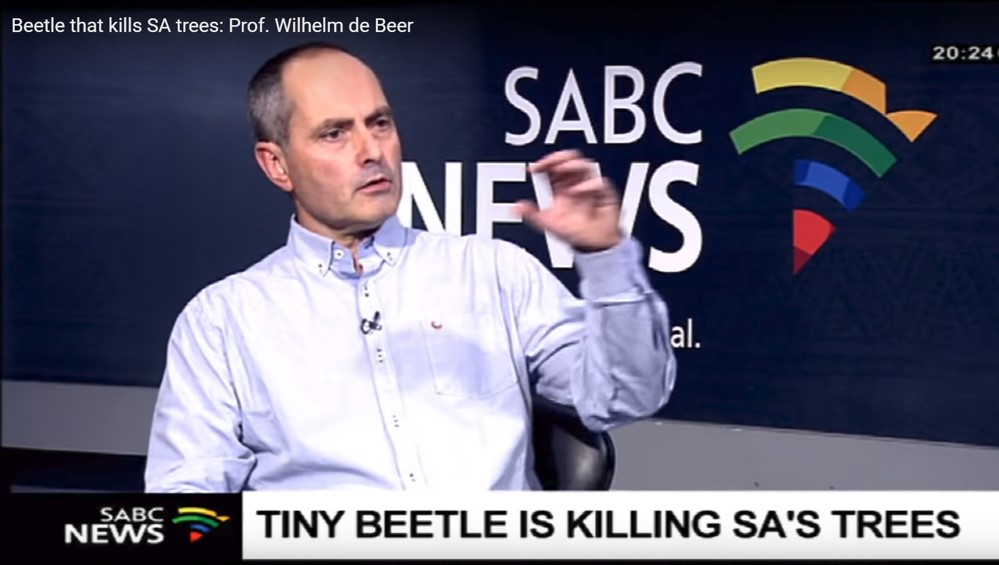 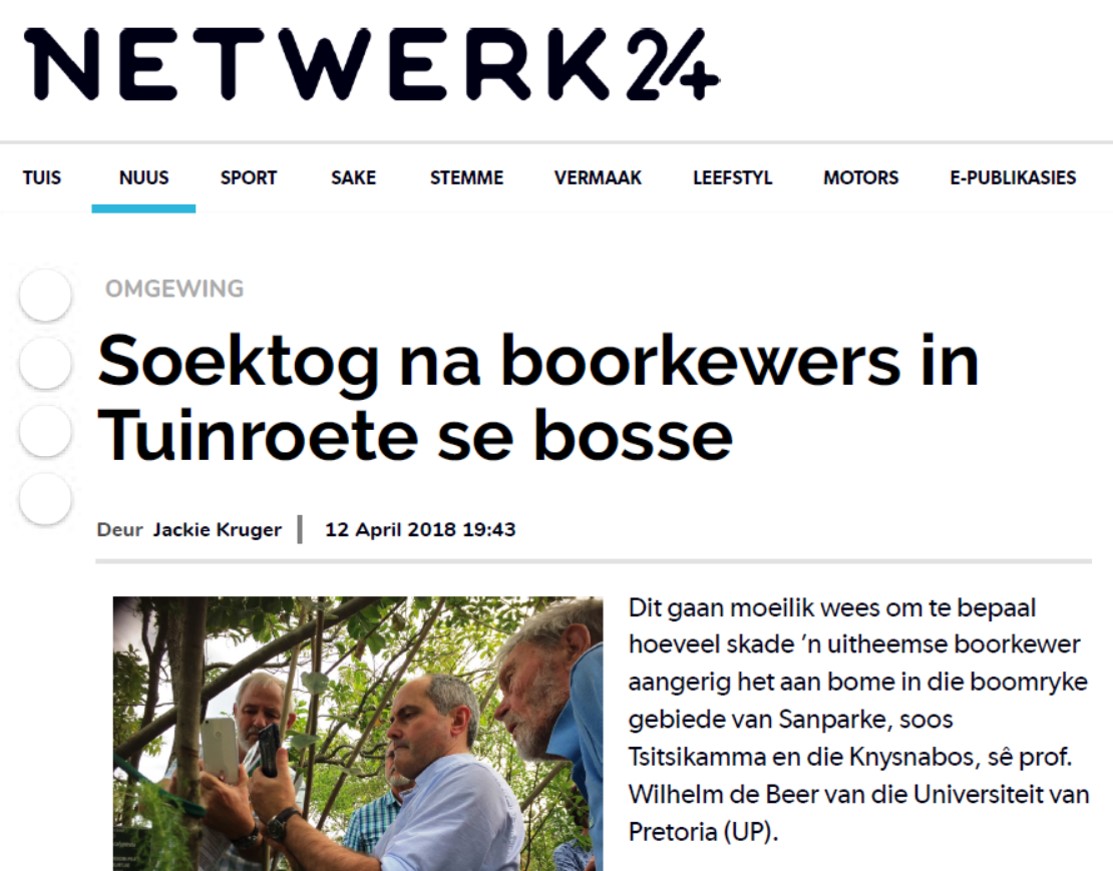 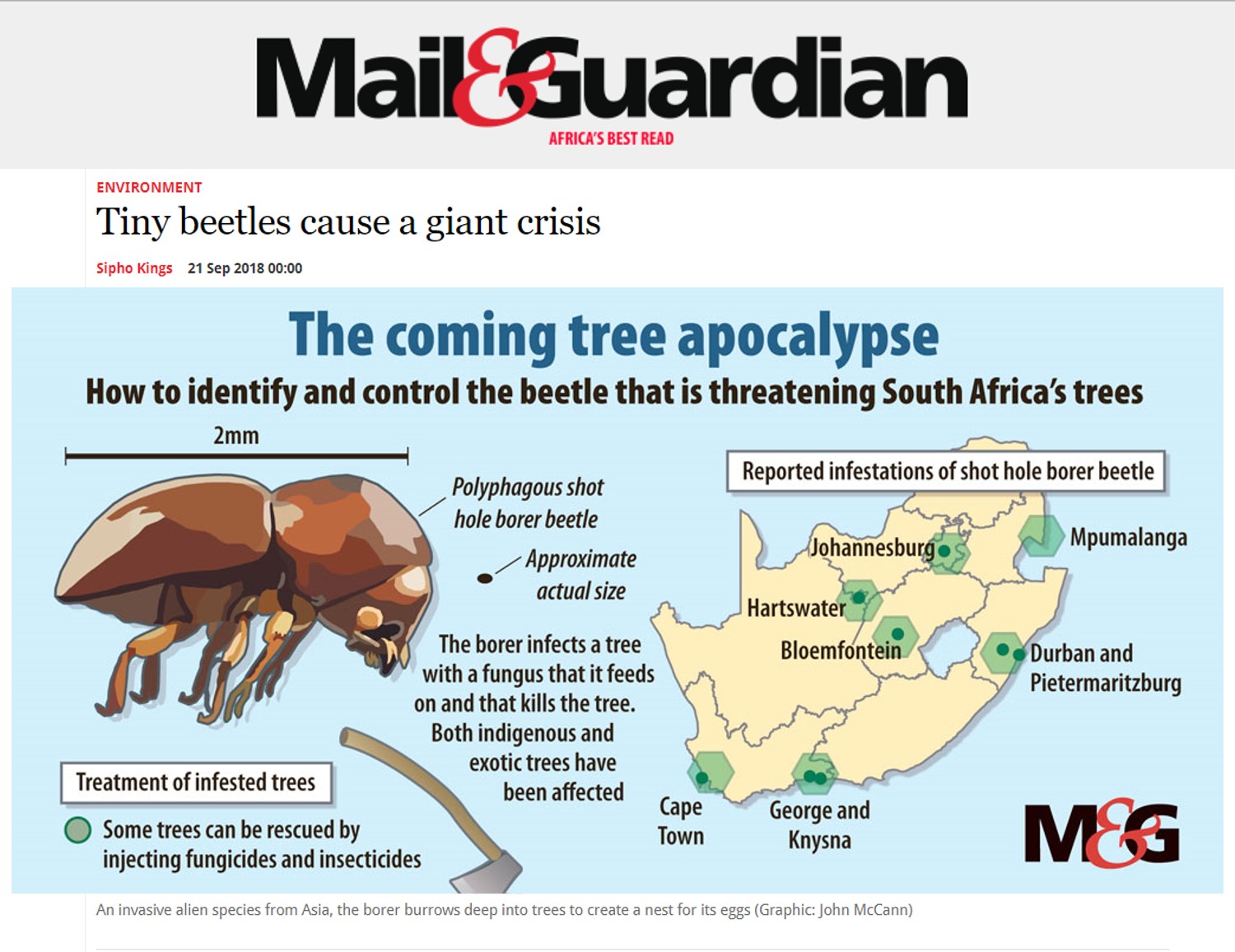 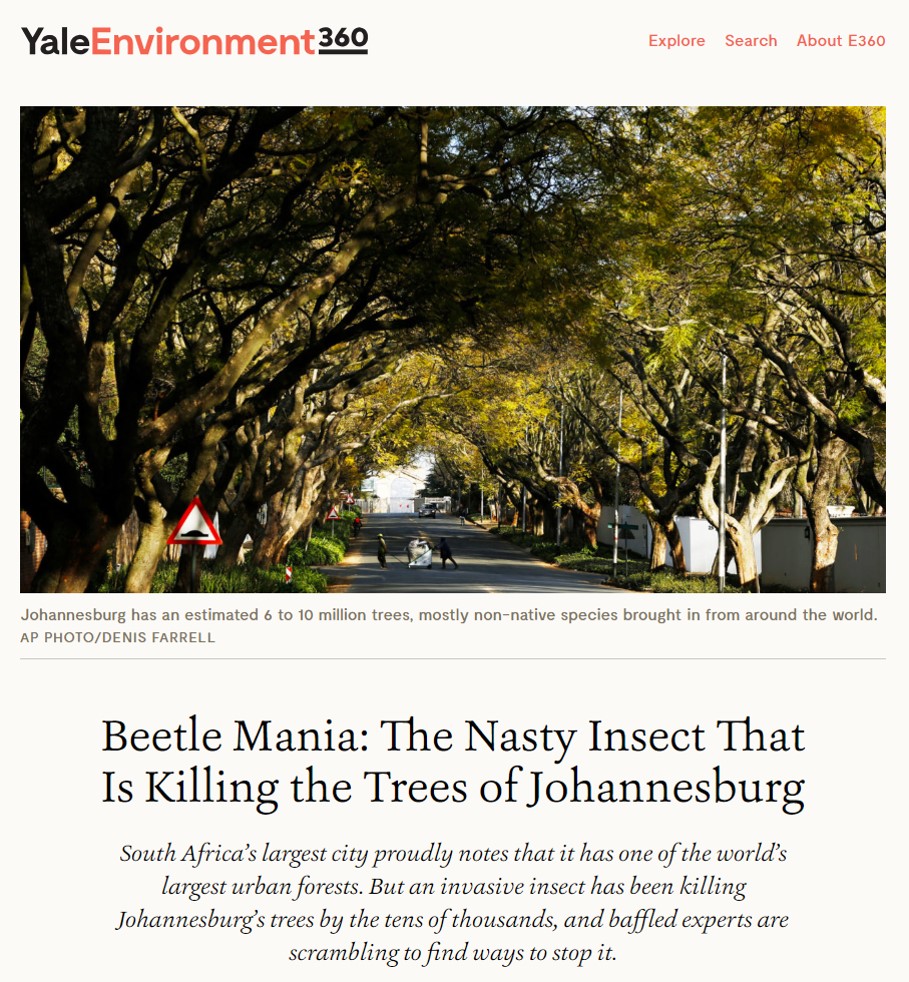 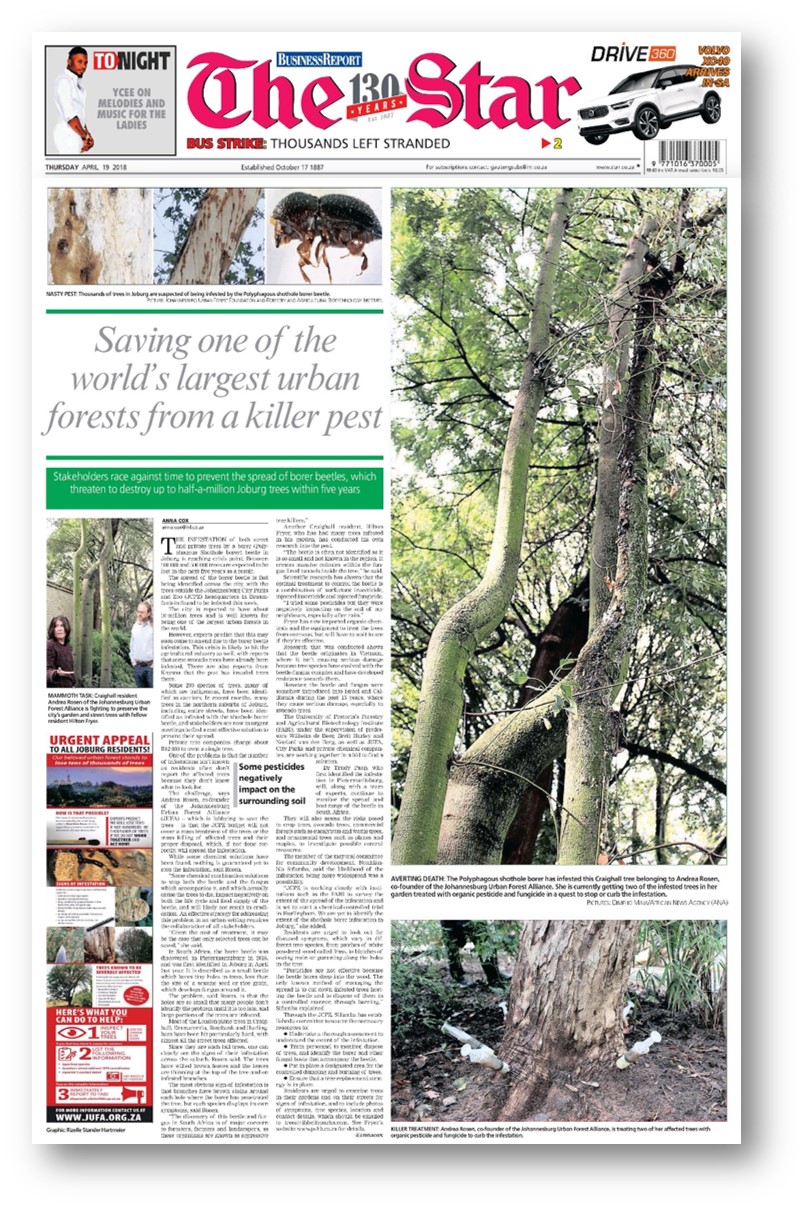 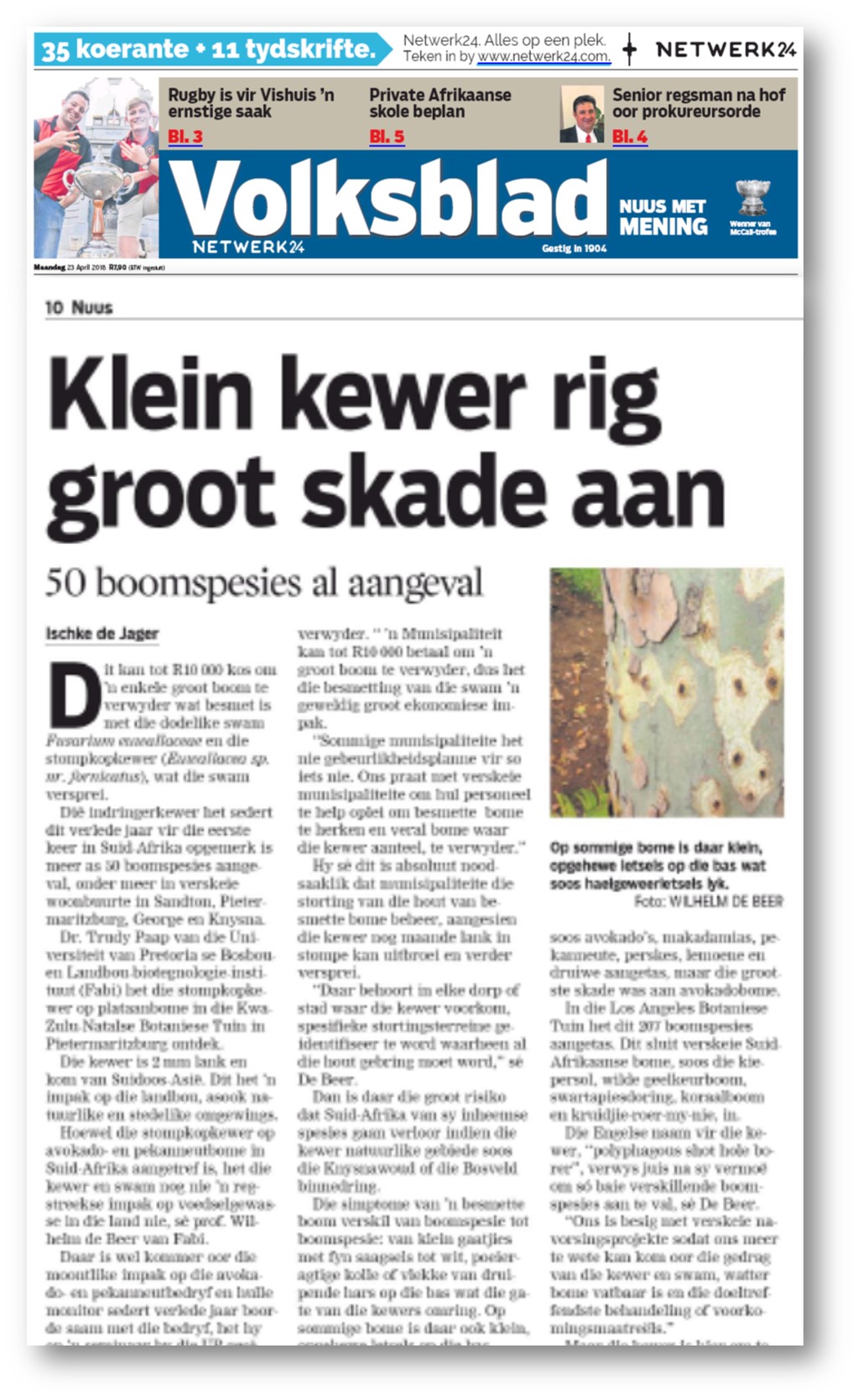 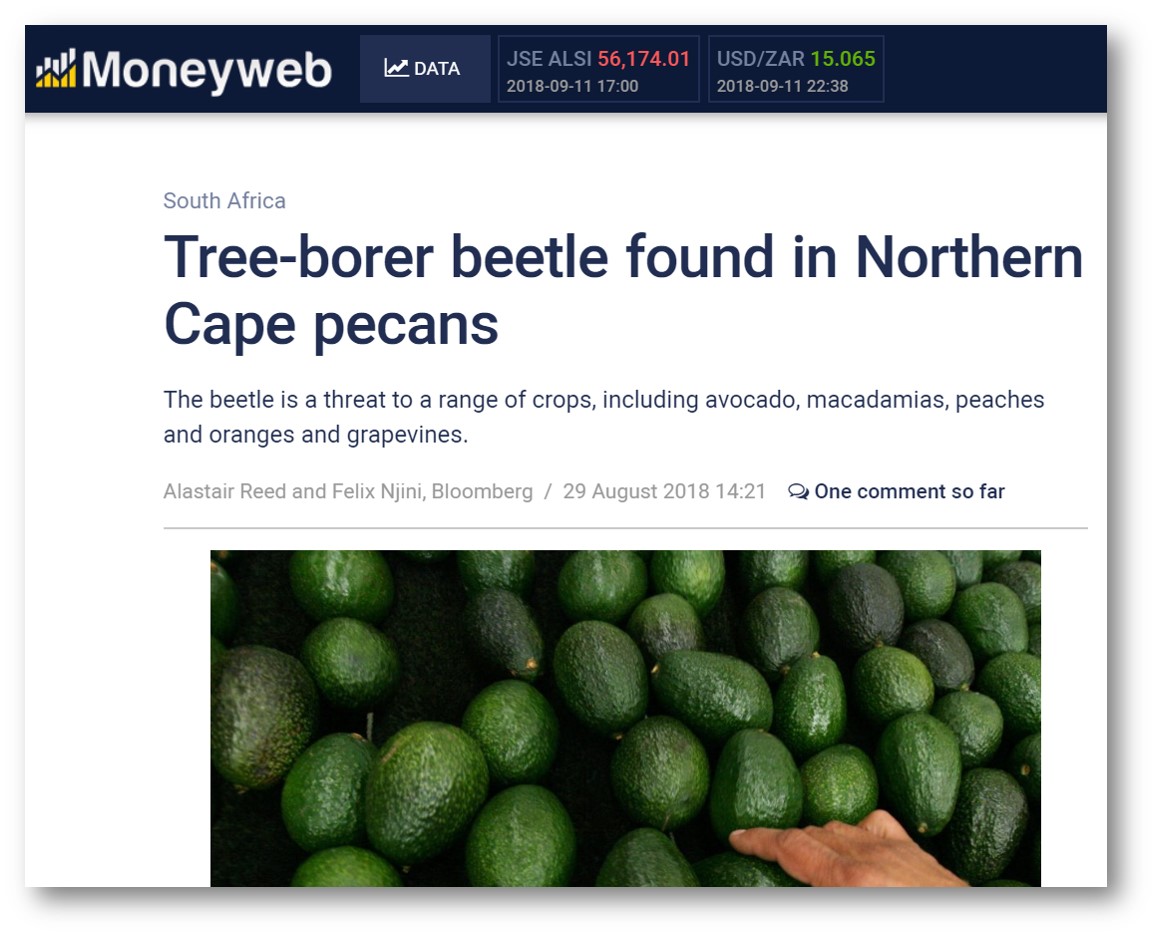 The invasion of the tree-killing Polyphagous Shot Hole Borer (PSHB) in South Africa has gained wide attention in the printed and digital media over the past few months, not only in South Africa, but also abroad. Many of these articles, interviews and videos featured interviews and contributions with members of the research team at FABI. Articles appeared in newspapers like the Mail & Guardian, Sunday Times, The Star, Beeld and Netwerk24, as well as audience specific magazines like Landbouweekblad and several regional newspapers. Television appearances included Carte Blanche and SABC News, and several radio interviews were broadcast on RSG, 702 and Landbouradio.

The reason for FABI's prominence is that the team at the institute was the first to detect and report trees dying as a result of PSHB infestations in South Africa. This should not come as a surprise, as the Tree Protection Cooperative Programme (TPCP) and DST-NRF Centre of Excellence in Tree Health Biotechnology (CTHB) have 30 years of research experience on tree pests and pathogens, and provides South Africa with the human capacity, expertise and facilities to recognize and deal with such pests. The FABI diagnostic clinic, managed by Mr Darryl Herron, is currently the only facility in the country that can reliably identify both the beetle and its fungal symbionts based on state-of-the-art molecular techniques.

Furthermore, a PSHB research team at FABI was established under the leadership of Prof. Wilhelm de Beer, Prof. Noelani van den Berg and Dr Trudy Paap. Projects range from pecan and avocado trees, to urban and native forests. Funding have already been secured from the pecan, avocado and forestry industries, and negotiations for further funding and specific projects are underway with Johannesburg City Parks, SANBI, DEA, and DAFF. In these projects, the team at FABI will collaborate widely with other institutions like the Universities of Stellenbosch, Rhodes, and the Witwatersrand, as well as DAFF, DEA, the ARC, SANBI, SANParks, Ezemvelo KZN Wildlife, and various municipalities. The overall aim is to establish a reliable countrywide monitoring platform, and acquire scientifically sound data that will inform realistic treatment and management options, while avoiding a duplication of research efforts.

Inquiries about the shot hole borer problem can be sent to diagnostic.clinic@fabi.up.ac.za.