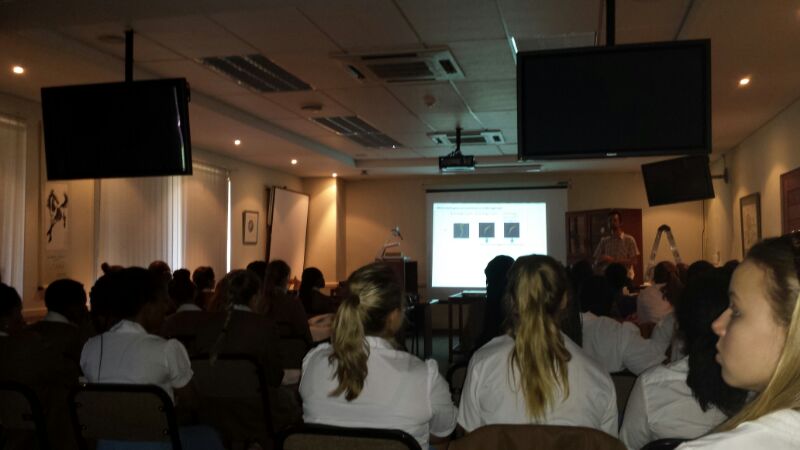 On Tuesday 18 March the Matric Life Sciences class from St Mary’s DSG visited FABI. The aim of this visit was to give the learners some insight into what a career as a scientist entails, and to inspire them to study science at a university level. The visit was led by Teboho Letsoalo, Kay Bopela, Juanita Avontuur, Godfrey Kgatle and Amy Wooding.

The day kicked off with talks by Dr Irene Barnes and Prof. Dave Berger. Dr Barnes spoke to the learners about being a woman in science and what it takes to be a scientist, as well as some of the perks, namely international travel, that come with the job. Prof Berger spoke about the wonderful ways that different scientific disciplines can work together to answer fascinating questions, highlighting research being done in conjunction with NASA on the ability of Arabidopsis thaliana to grow in space!

The talks were followed by a tour of the FABI facilities. The learners were shown a molecular lab by Danielle Roodt, told about the ins and outs of a greenhouse by Priyen Pillay and introduced to the world of preserving cultures by Dr Seonju Marinkowitz. The fun continued with the learners doing some lab work of their own. The learners performed Gram staining and used microscopy to identify whether their ‘mystery cultures’ were Gram positive or Gram negative. The visit ended with some well-deserved rest in the form of a surprise lunch for the learners, which was attended by a number of FABI students who talked with the learners about their research and post graduate studies.