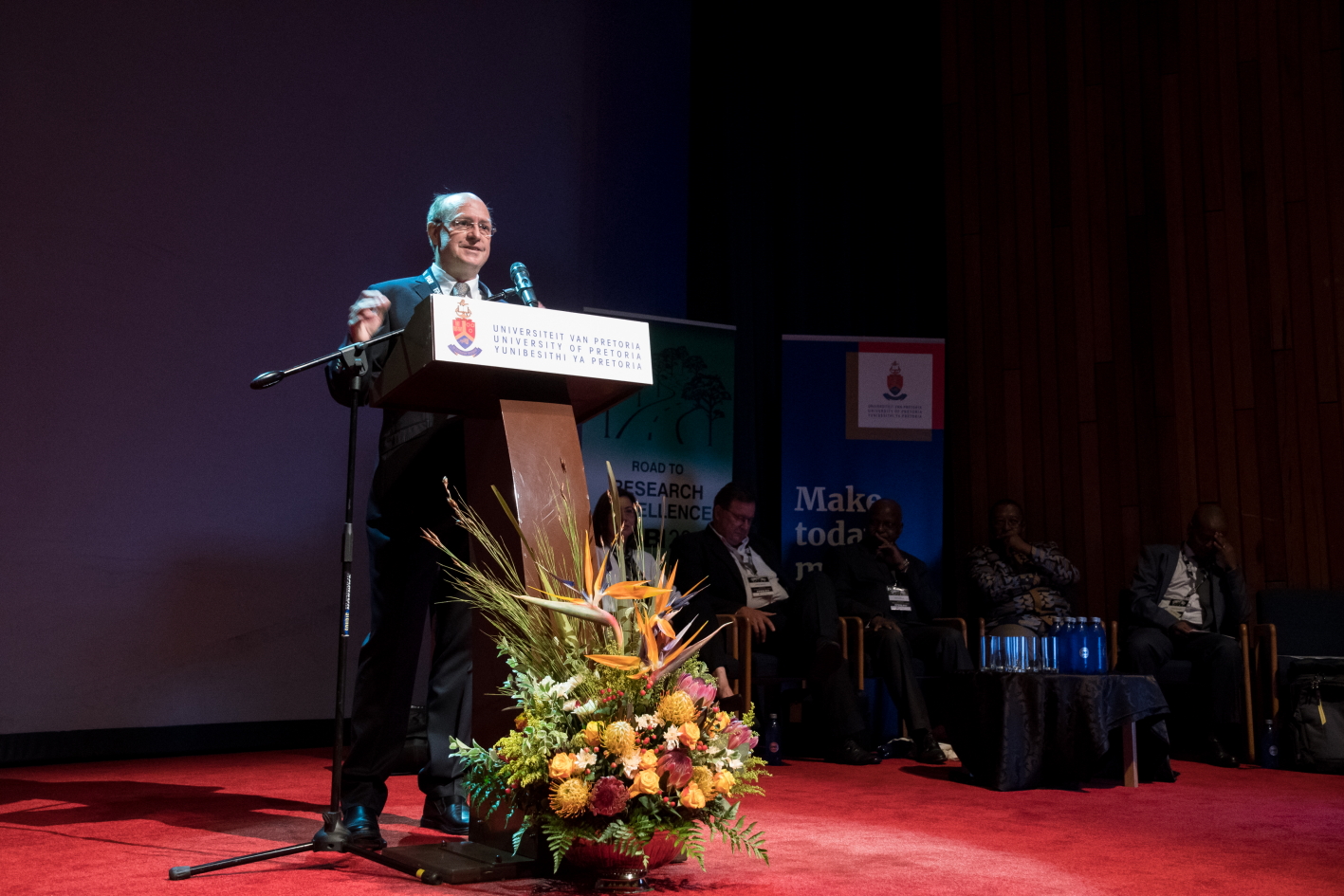 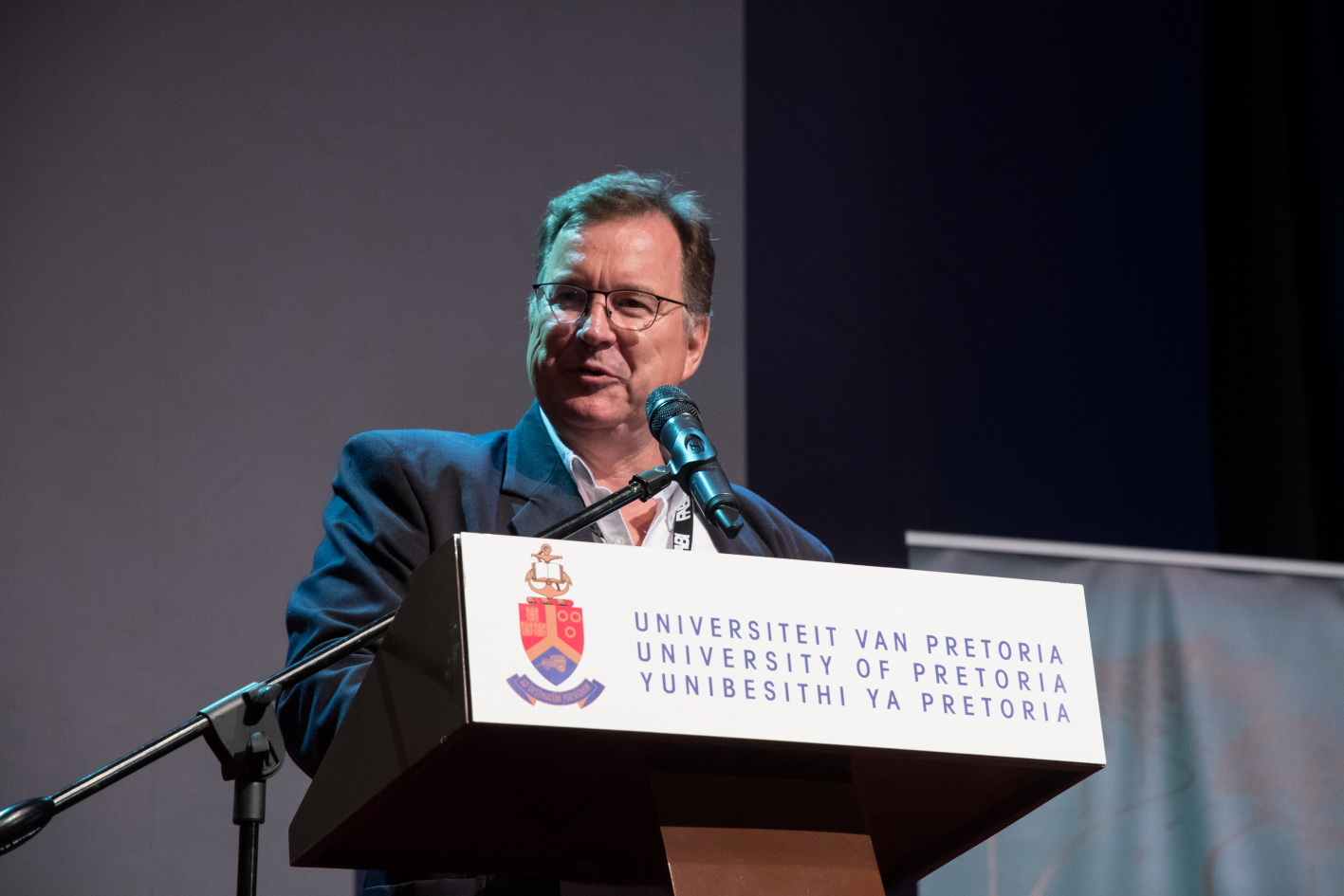 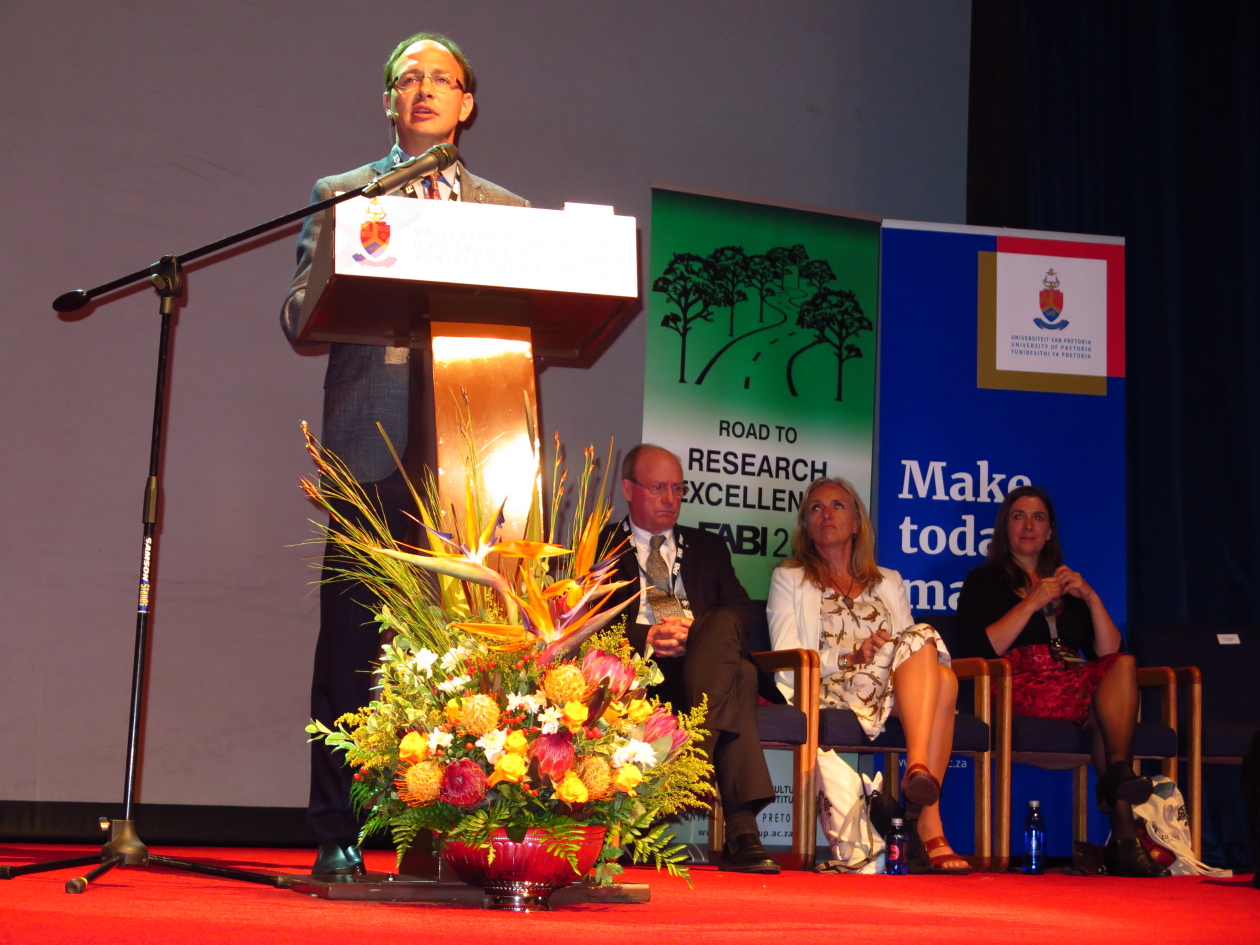 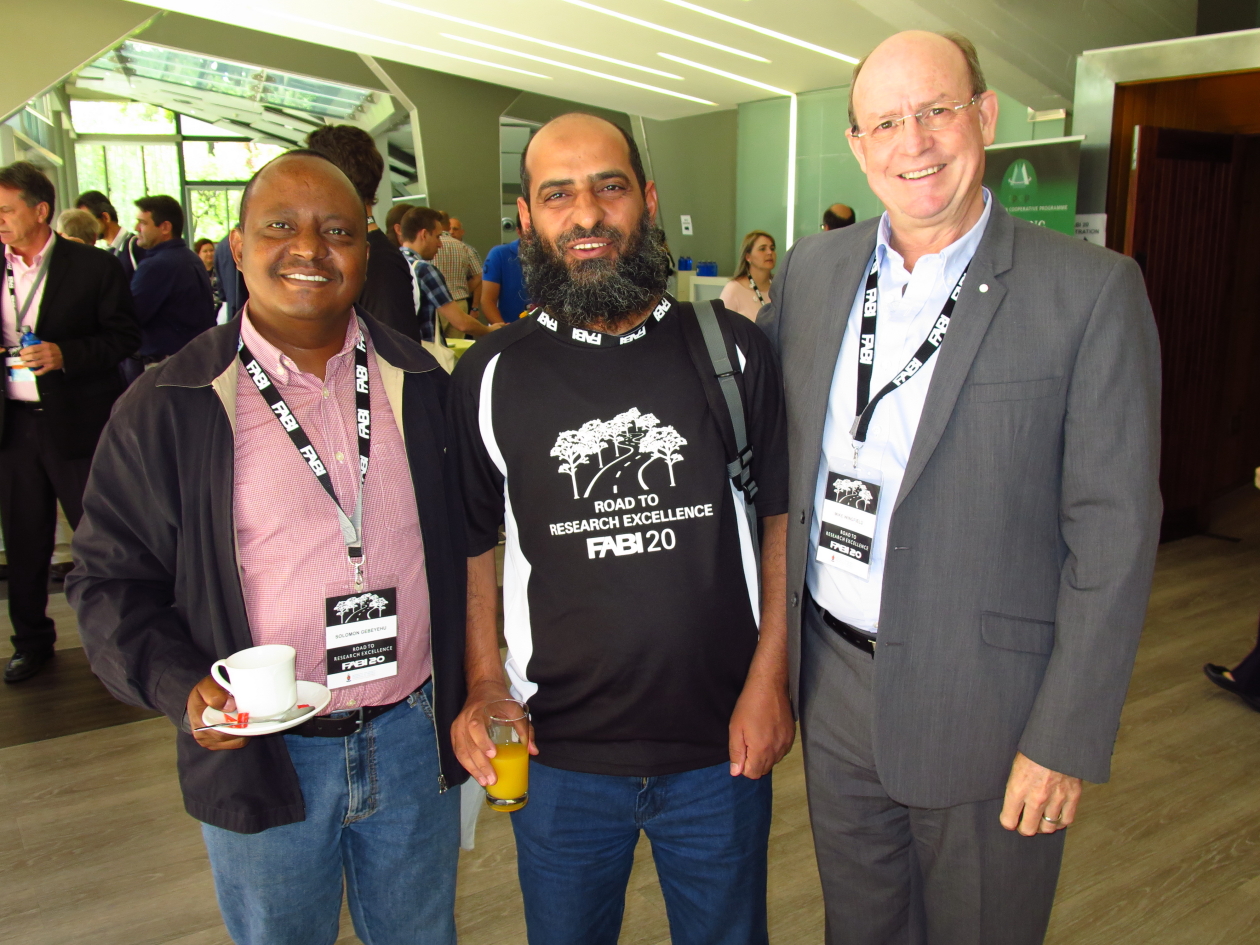 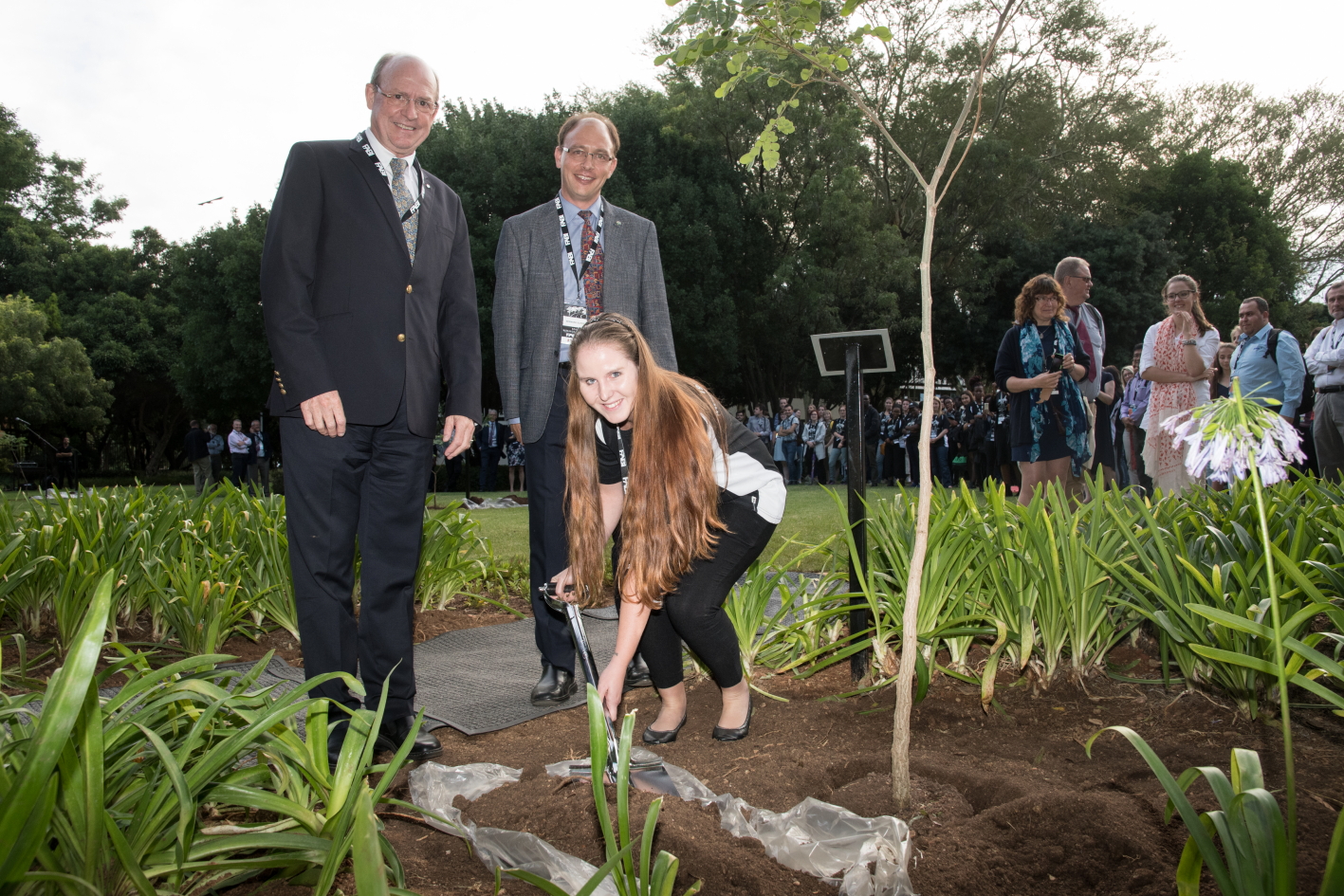 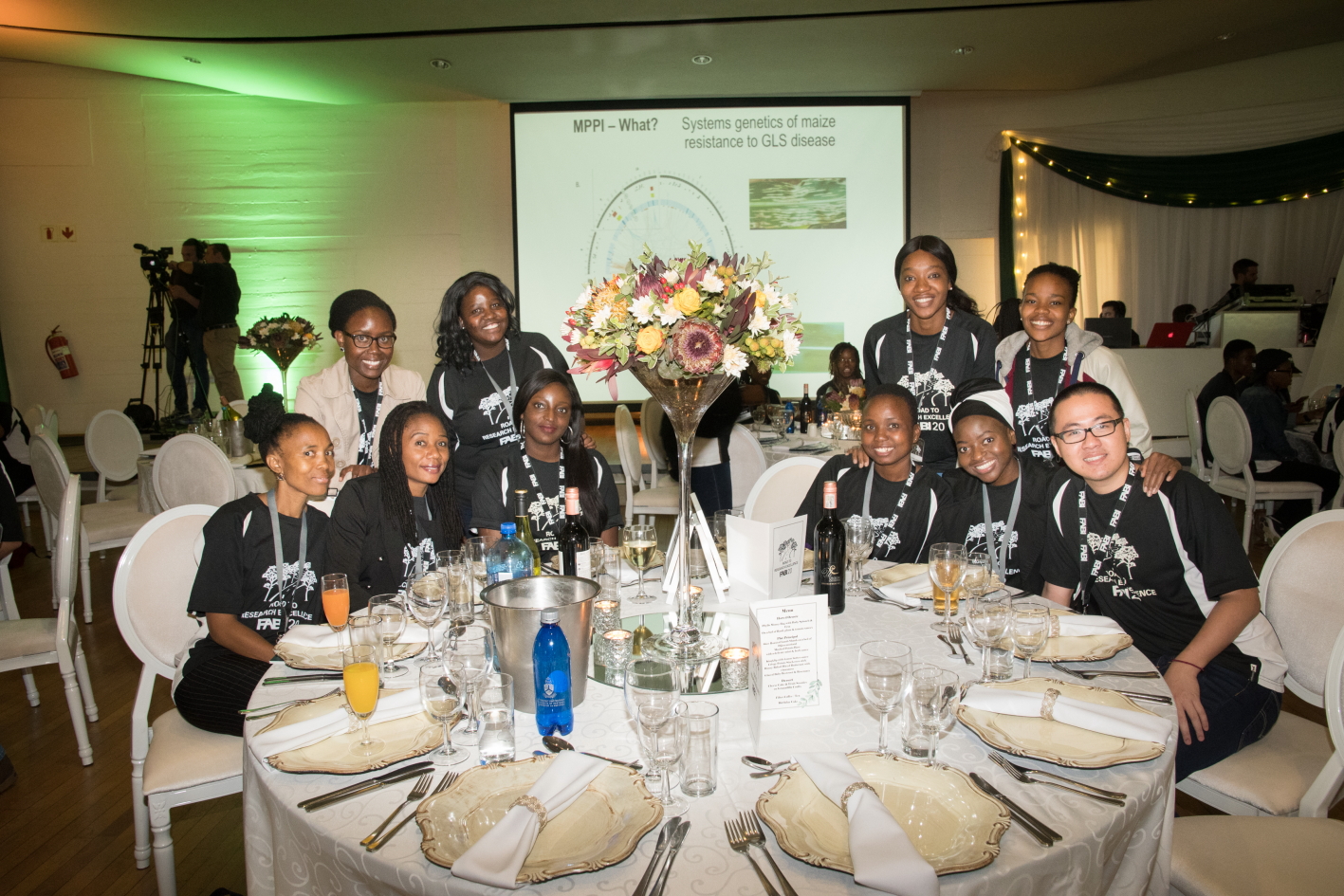 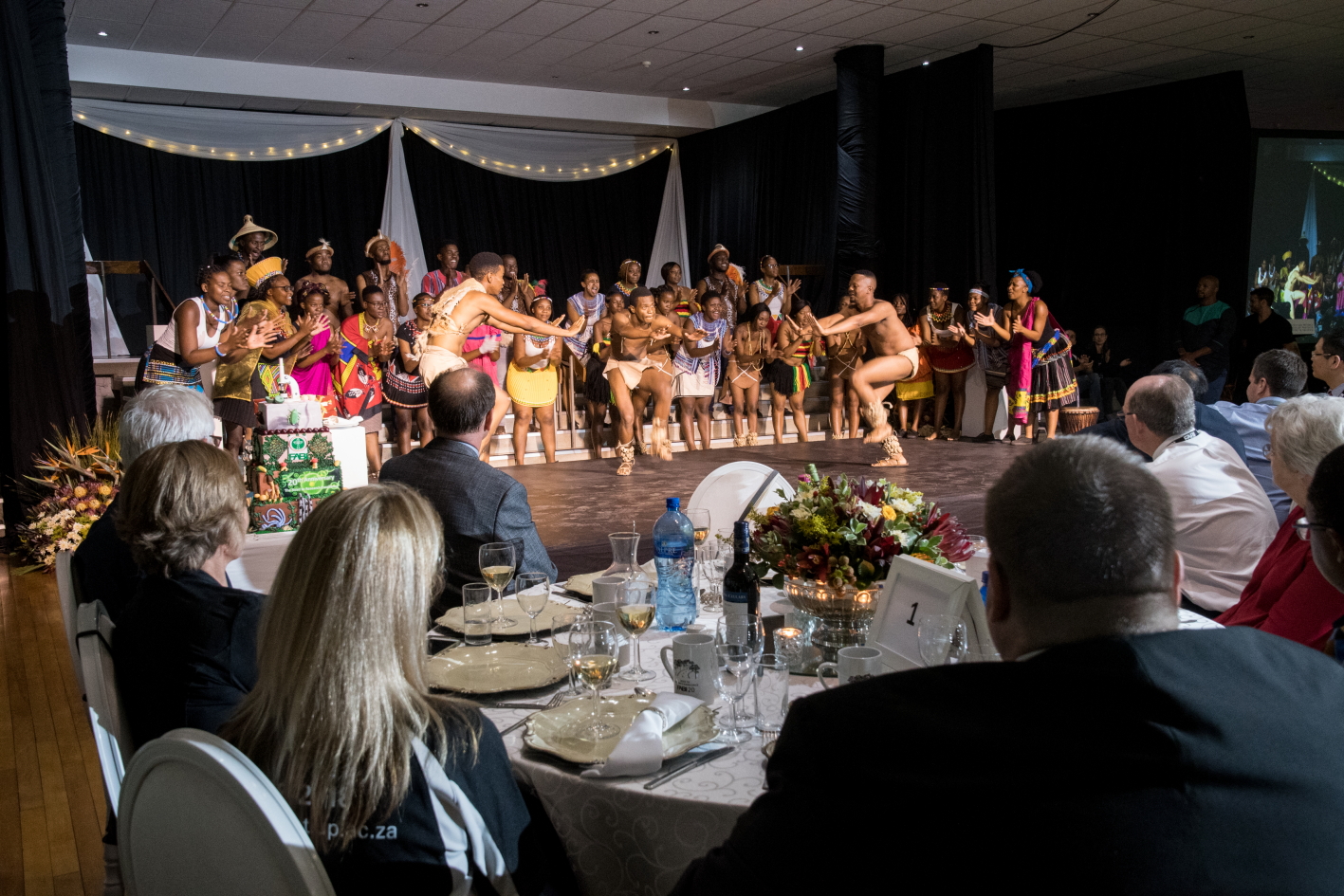 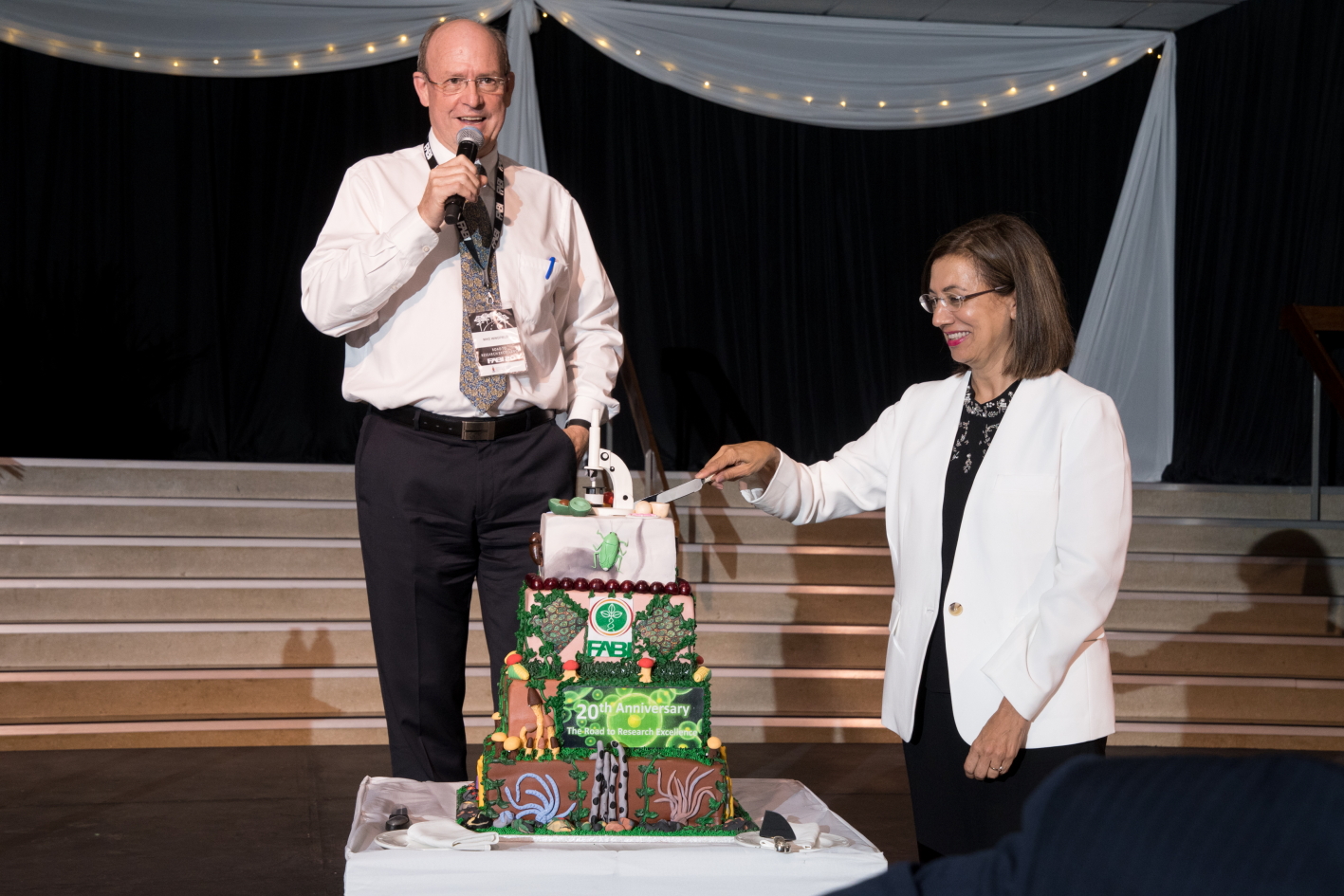 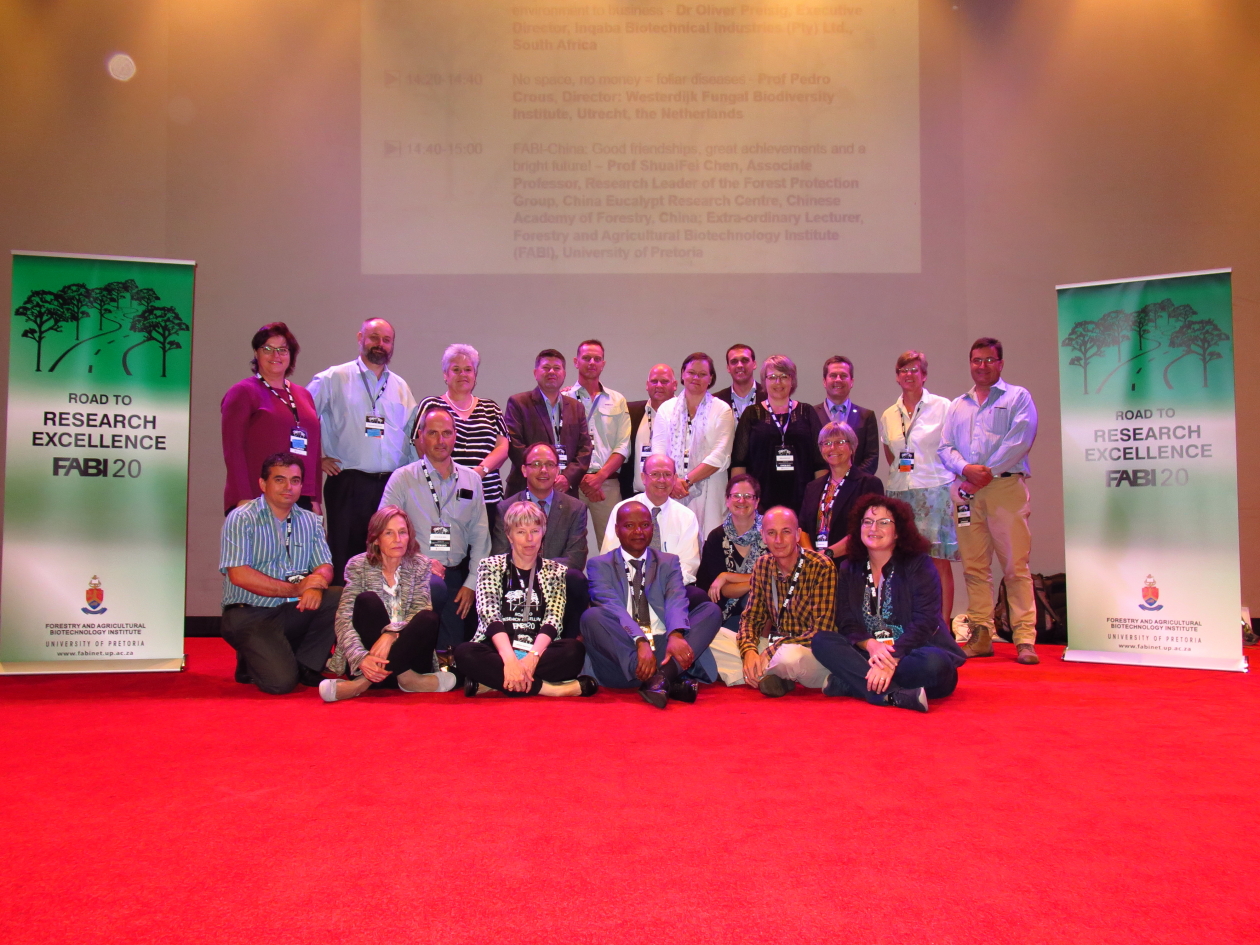 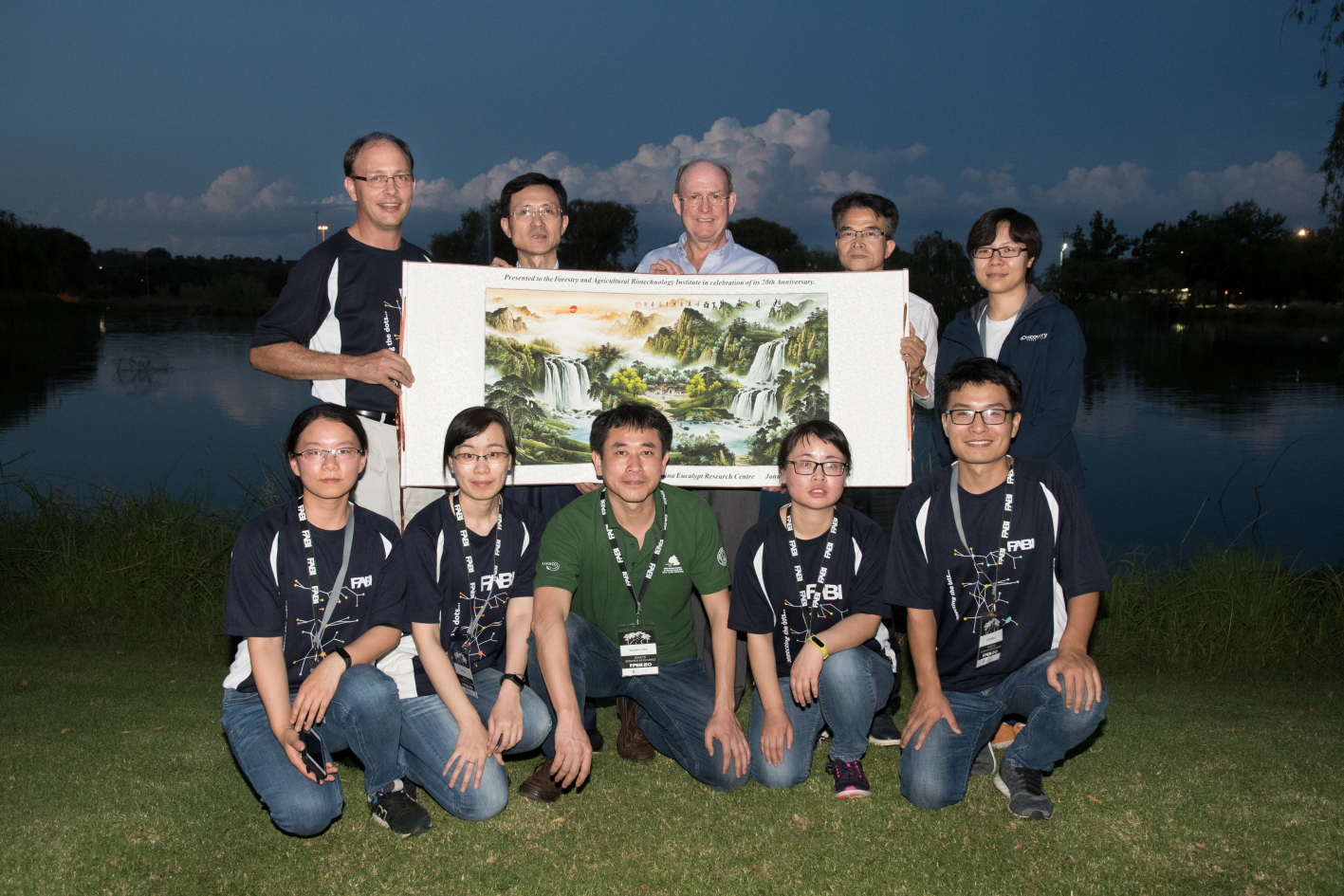 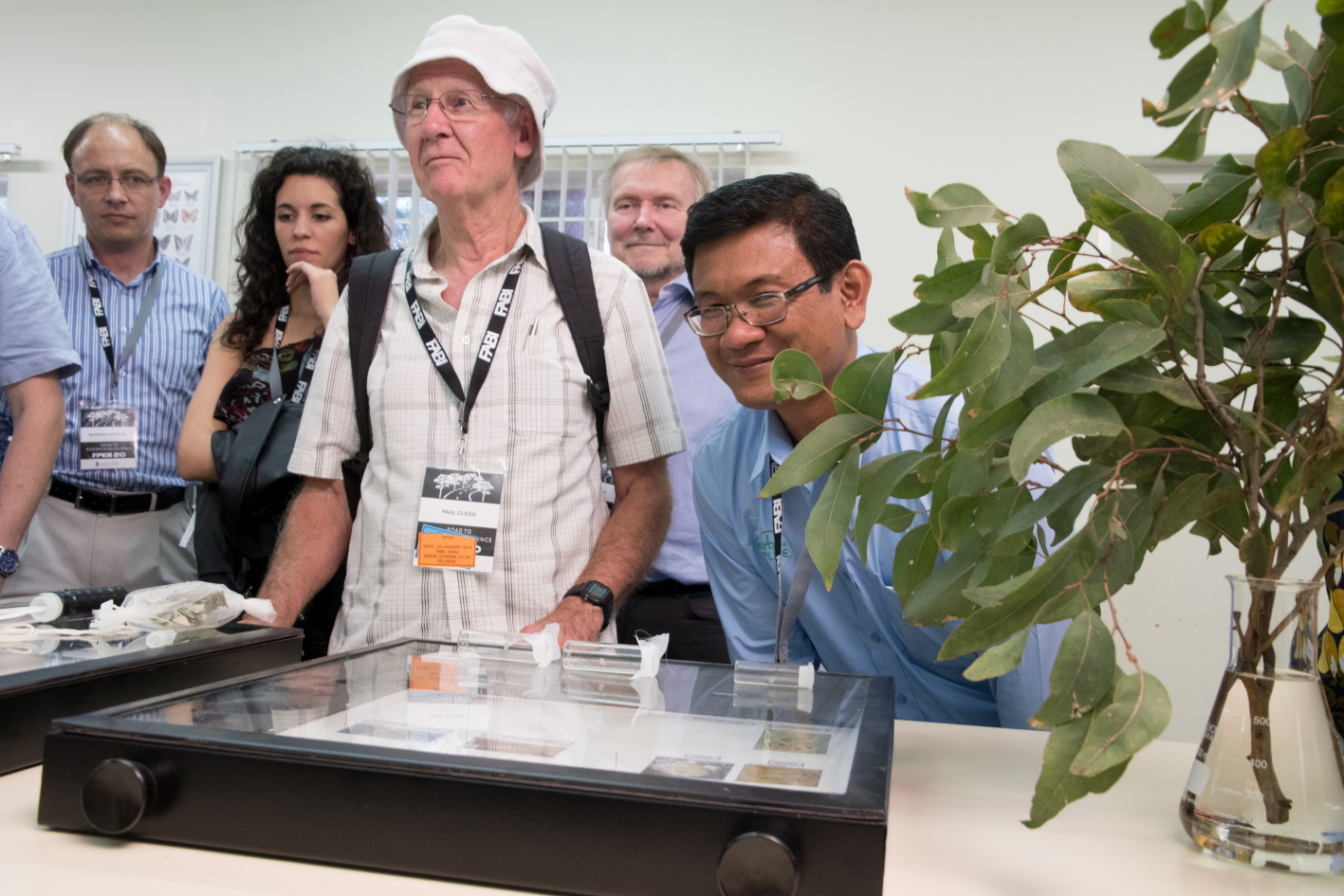 http://www.naci.org.za/FABI celebrated two decades of research excellence with a science symposium held on 24-25 January in the Aula Theatre on the Hatfield Campus of the University of Pretoria. More than 300 FABI alumni, academics, Government and forestry industry representatives, as well as many current FABI researchers, staff and students, attended the two-day celebration, themed “The Road to Research Excellence”. After more than a year’s planning the event was a resounding success, combining science with art, culture and celebration. The symposium featured 39 presentations including speed presentations by six FABI postgraduate students. Some 60 foreign guests travelled from 15 countries across the globe to attend the celebration. This number also included some of the researchers from seven South African and 22 international universities and research institutes.

To mark the event, FABI’s founding Director Prof. Mike Wingfield wrote a concise history of the Institute entitled “The Road to Research Excellence: The FABI Story”. The event also saw the official welcome for Prof. Bernard Slippers as the new Director of the Institute as from 1 January 2018.

Opening the symposium Prof. Mike Wingfield welcomed everyone and, in recounting the huge impact of FABI on research at the University of Pretoria and to industry, he said that the success of FABI lies in its flexibility “FABI was an experiment and remains an experiment”.

FABI has, in its 20 years existence prided itself on its research output and graduating postdoctoral students. This includes in excess of 1250 research articles, eight books, 105 book chapters, 260 M.Sc. graduates, and 160 Ph.D. graduates.

Former UP Vice-Chancellor and Principle, Dr Johan van Zyl, in his address said that FABI was an idea and today we have in multiple what we had anticipated more than 20 years ago. “It grew beyond our dreams!”

Professor Jean Lubuma, Dean of the Faculty of Natural and Agricultural Sciences said that the Faculty viewed the institute as a model of how interdisciplinary research excellence can be achieved.

But FABI also changed many people’s lives. Numerous speakers, today respected researchers and professionals in their respective fields, described how studying at FABI changed their lives, gave them direction and inspired them. Most described it as a family rather than a group of researchers and this cohesion continues as could be seen by the large numbers of current FABIans nicknamed “black shirts” by virtue of their black FABI 20 shirts, who all worked tirelessly to make the symposium the resounding success that it was!

A musical interlude by MSc students in the UP Department of Music, Marcel Dednam (piano) and Derryn Griffiths (saxophone) entertained delegates with a range of musical pieces before lunchtime. The former Head of Department, Prof Wim Viljoen, introduced the duo.

FABI Director, Prof. Bernard Slippers, closed the day’s presentations speaking on his vision for the Institute going forward and shared some of the exciting plans he has for FABI’s next two decades.

A gala dinner celebration included a presentation by guest speaker Prof. Dr Ir. André Drenth, from the University of Queensland, Australia, and colourful performance of traditional songs and dances by the UP Avuwa Cultural Ensemble under the leadership of Mxolisi Duda. And what would a birthday be without a birthday cake? A spectacular FABI-themed birthday cake was cut to the sound of guests singing “Happy birthday” while Alexander Buck, Executive Director of the International Union of Forest Research Organizations (IUFRO) presented both Prof. Mike Wingfield and Bernard Slippers with a traditional Austrian Sacher Torte cake each.

The second day closed with a visit to FABI and the Institute’s Biocontrol Facility to “see and meet the FABIans”. An exhibition more than 80 works of tree and wood art was also organised by Prof. Wilhelm de Beer in partnership with the University of Pretoria’s Department of UP Arts. On display are works from the permanent collection of the University that depict trees, are made of wood or where wood has been used in the creation of the pieces. Works by FABIans Dr Alistair McTaggart, Dr Trudy Paap and Mr Nam Pham were also included.

The symposium was not just about celebrating 20 years of research excellence but also an opportunity for many current FABIans, alumni and collaborators to interact and share memories, but also look to the future at possible new collaborations to drive FABI to greater heights in its next two decades.

The making of a career; a chance meeting that has led to 20 years of research collaboration and friendship - Prof Treena Burgess*, Professor, School of Veterinary and Life Sciences, Murdoch University, Australia

Adaptation and symbiosis – Using nature’s toolkit to excel in Science (and everything else) - Prof Diana Six, Professor of Forest Entomology/Pathology, WA Franke College of Forestry and Conservation, Department of Ecosystem and Conservation Sciences, The University of Montana, USA

Danielle Roodt: Evolution and development of wood in the land plants

Andi Wilson: Sex: How the fungi do it