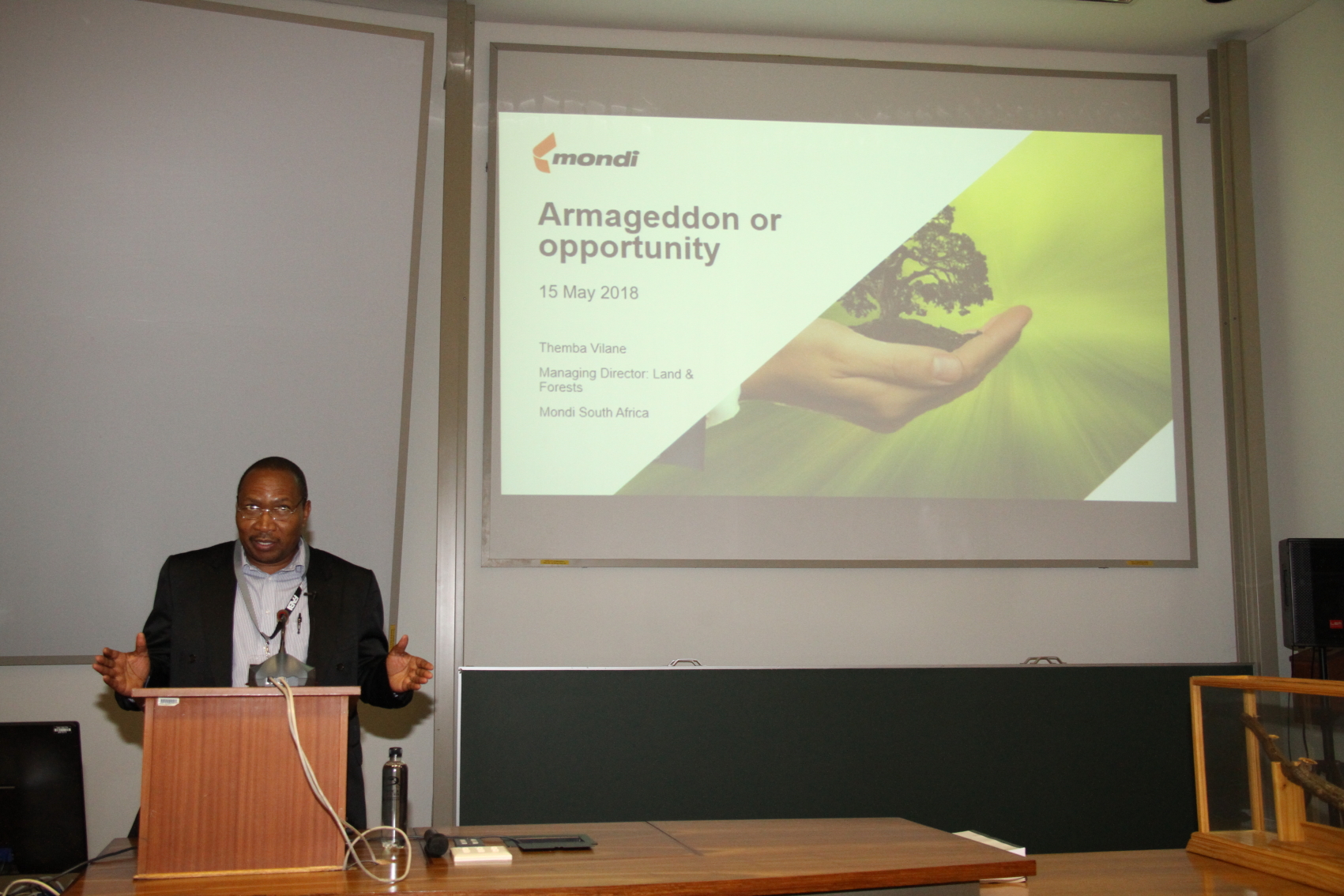 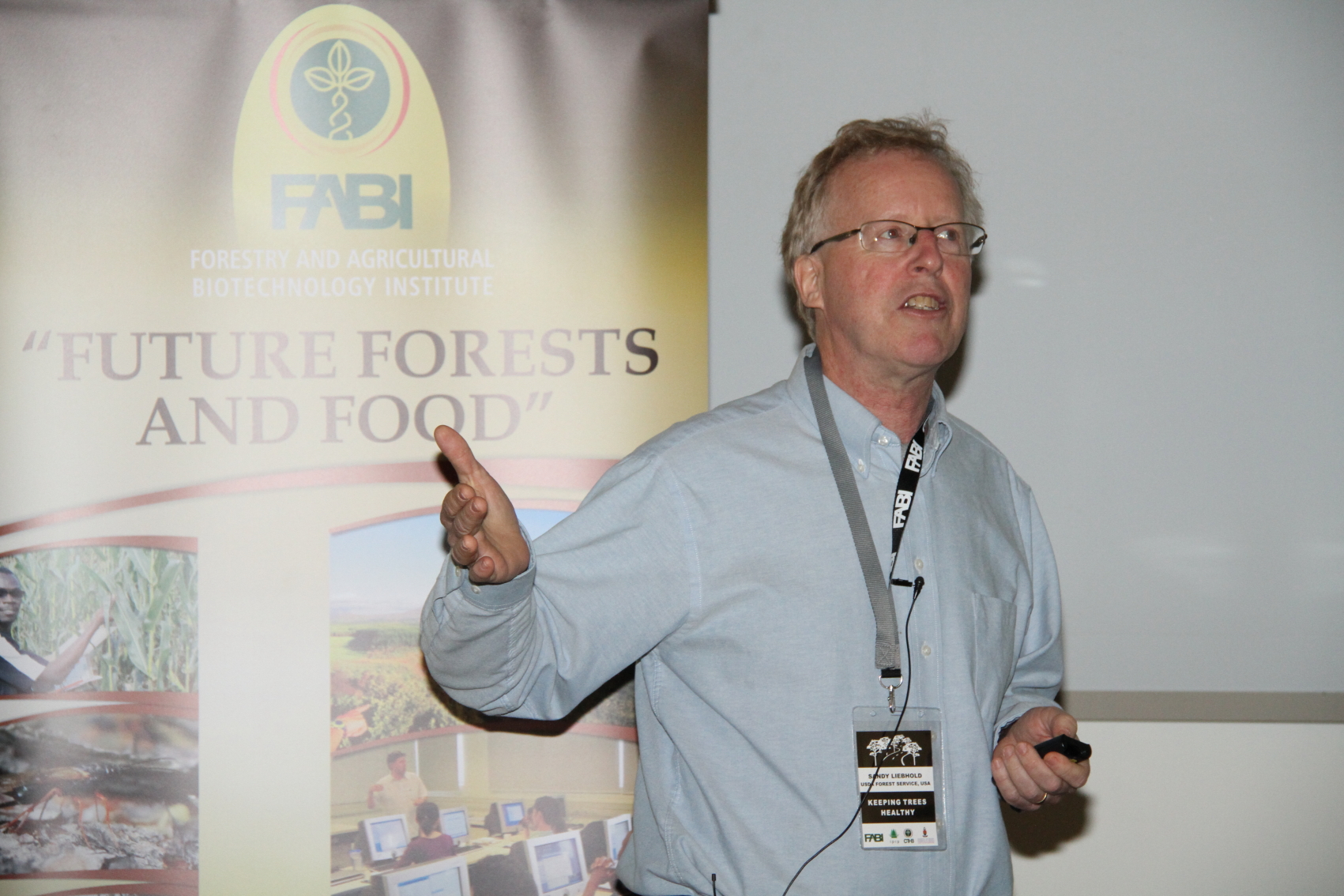 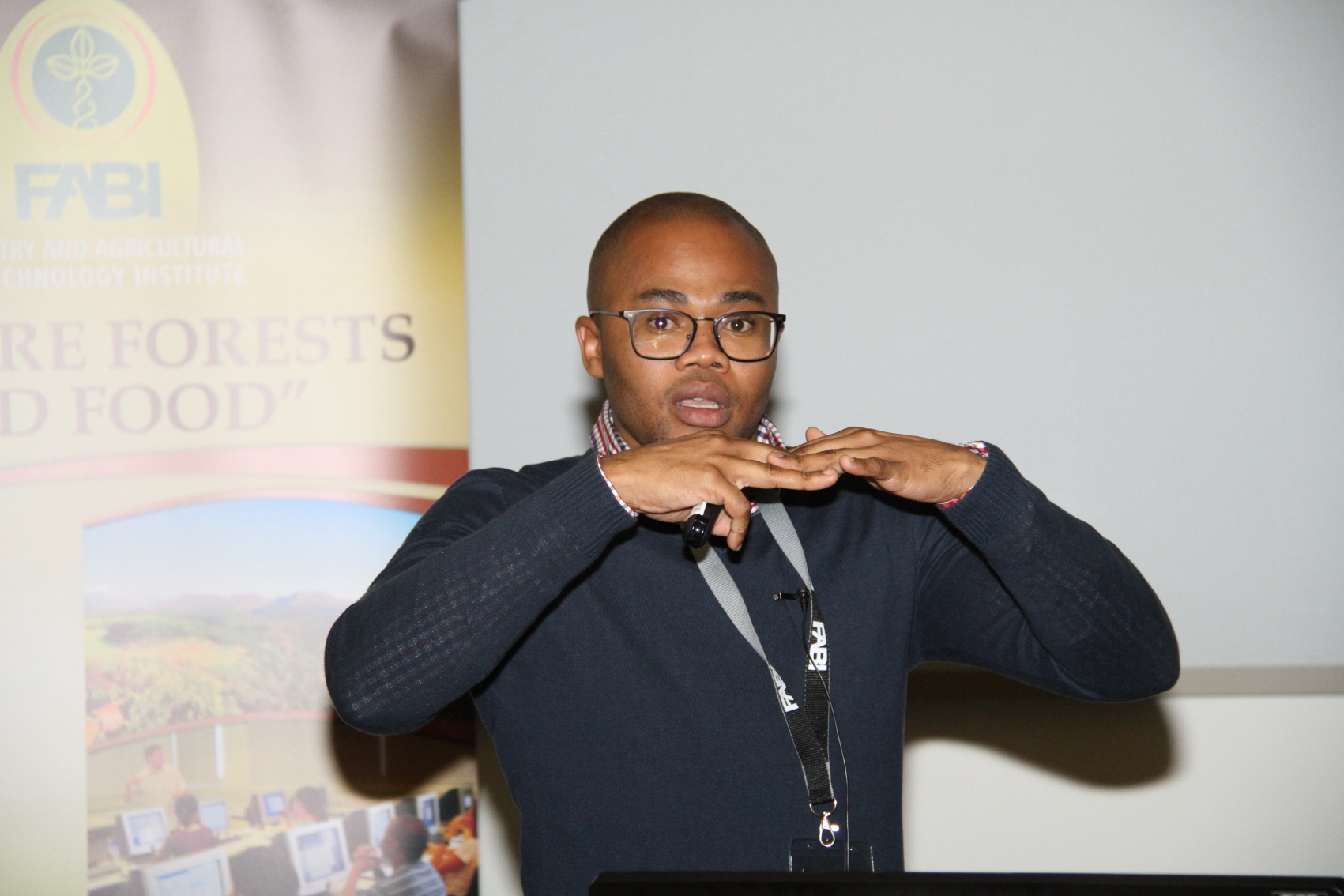 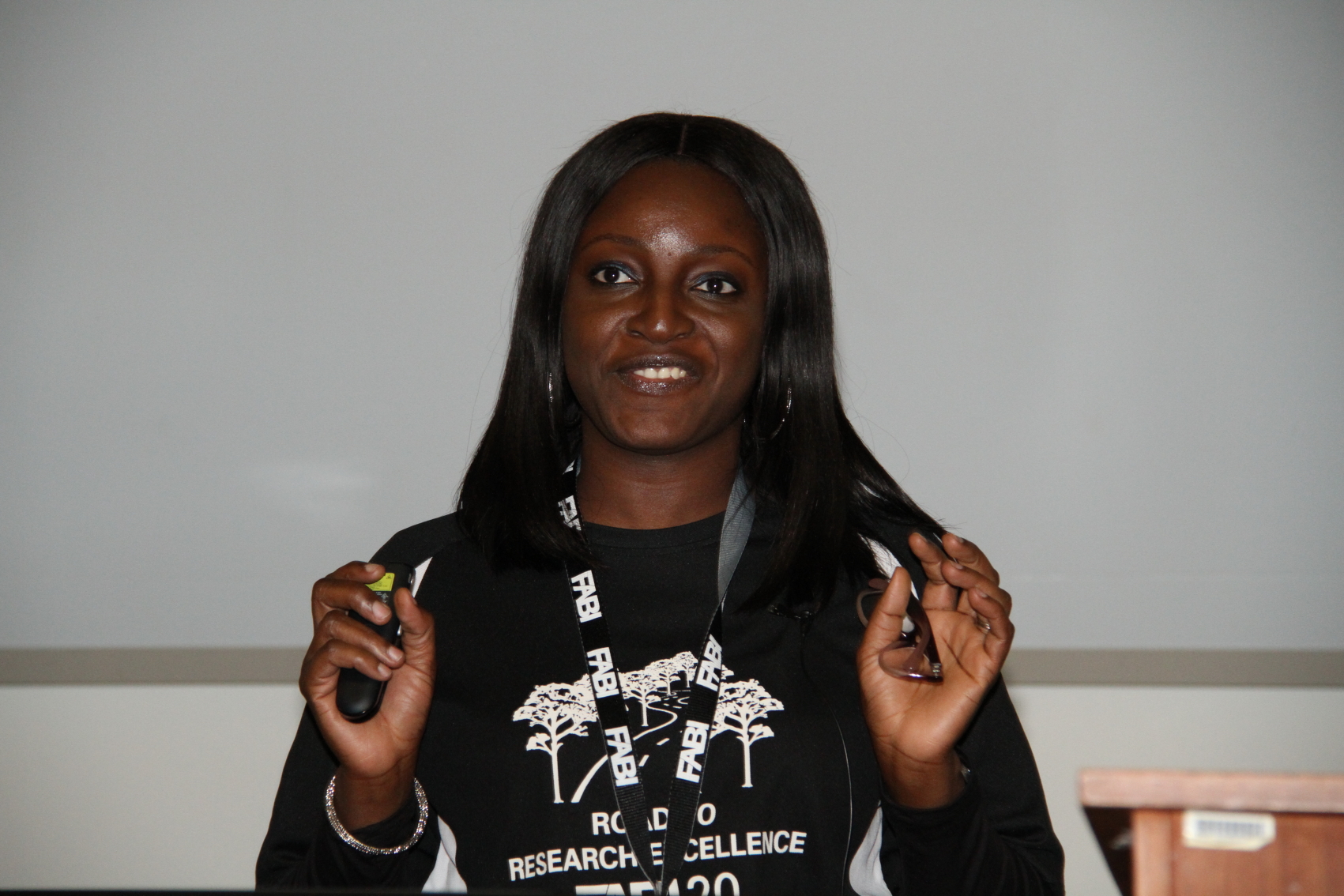 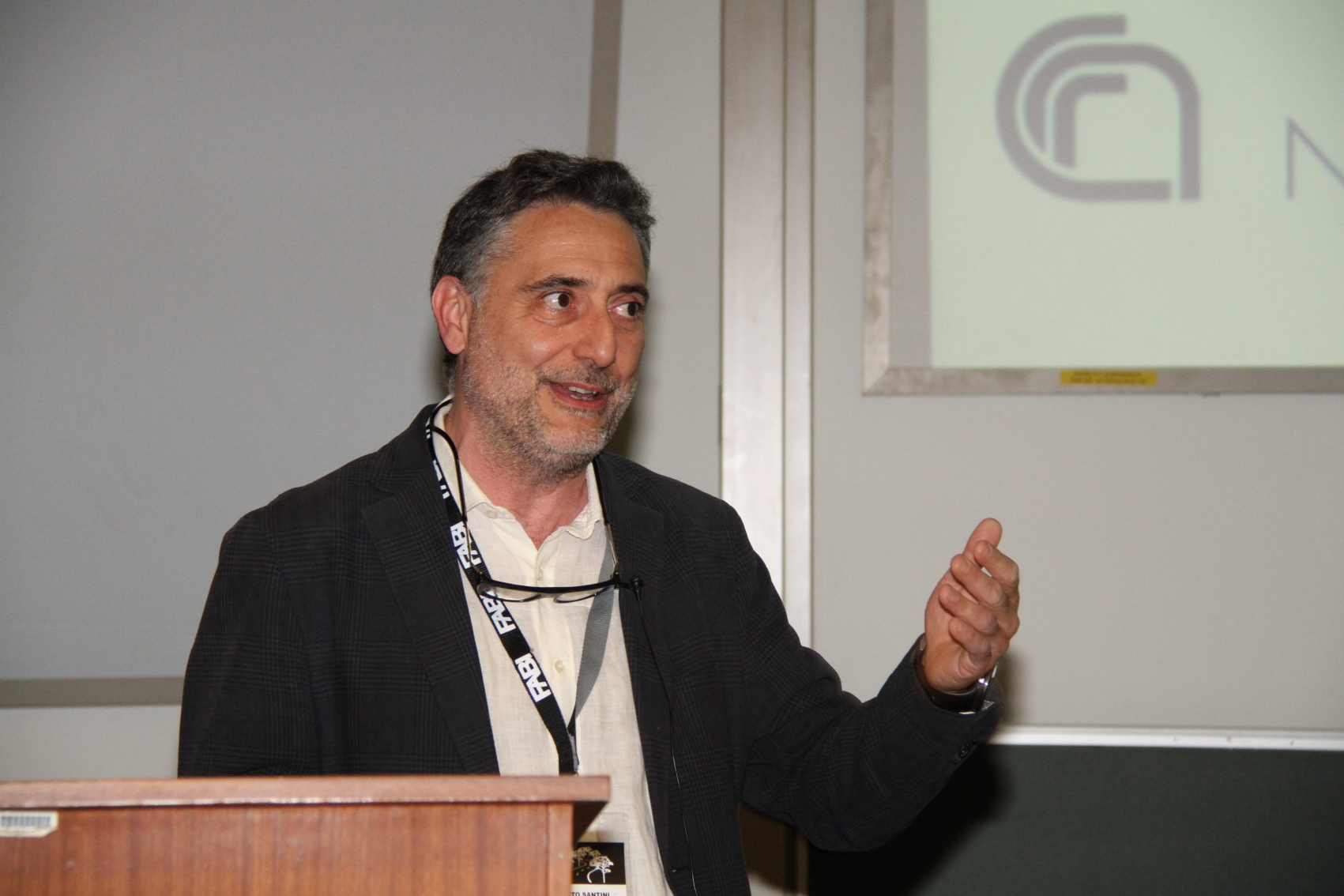 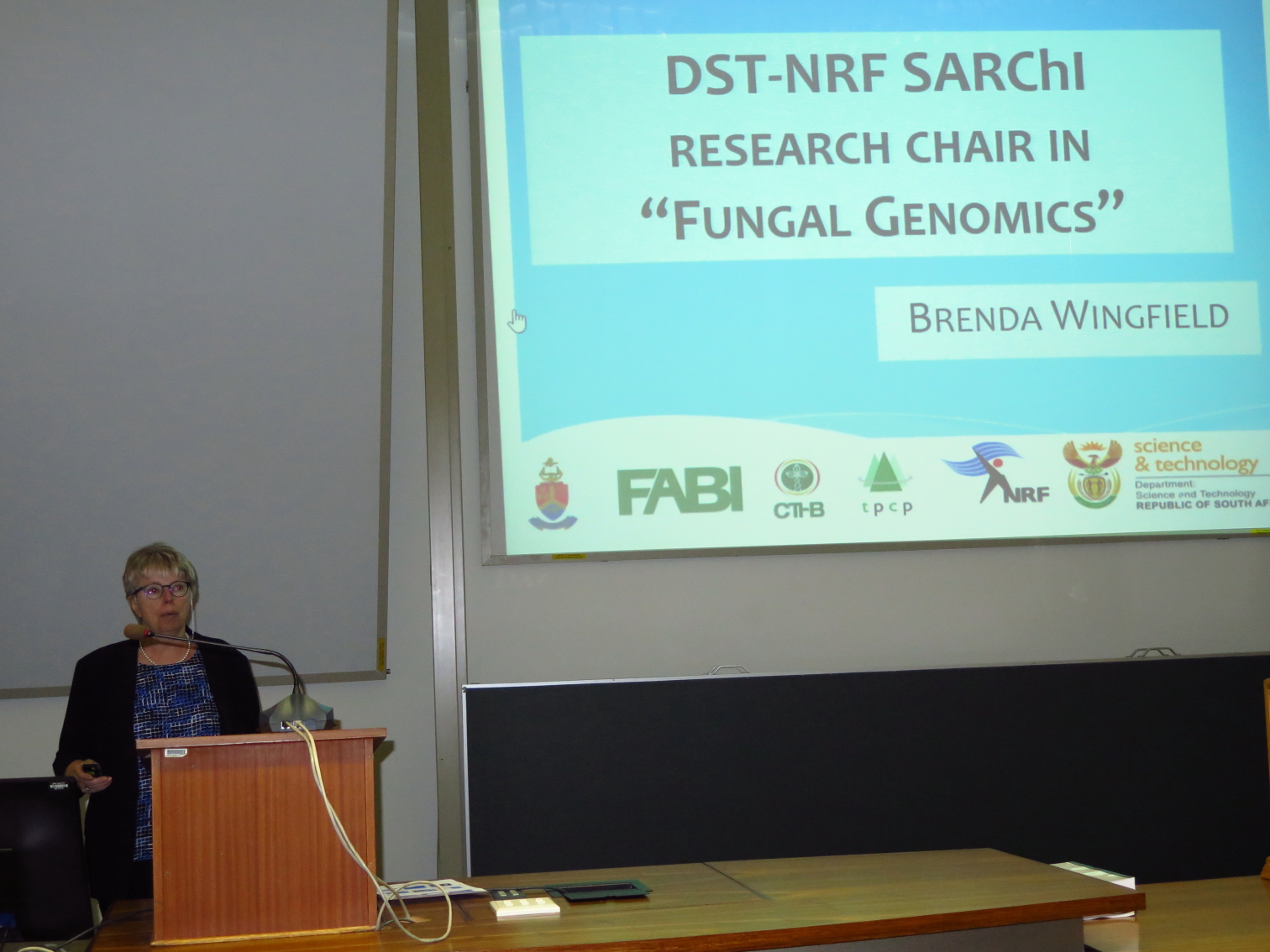 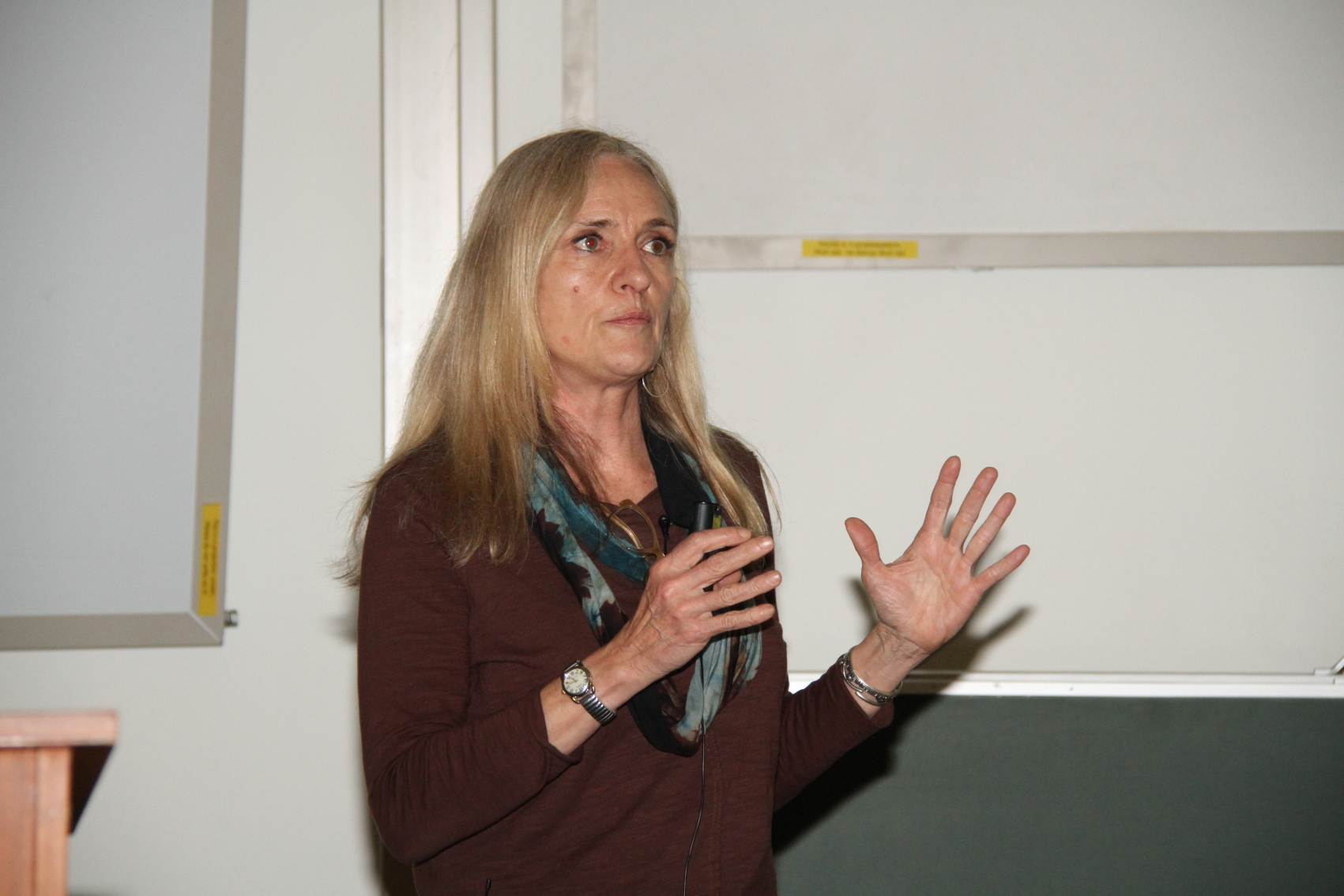 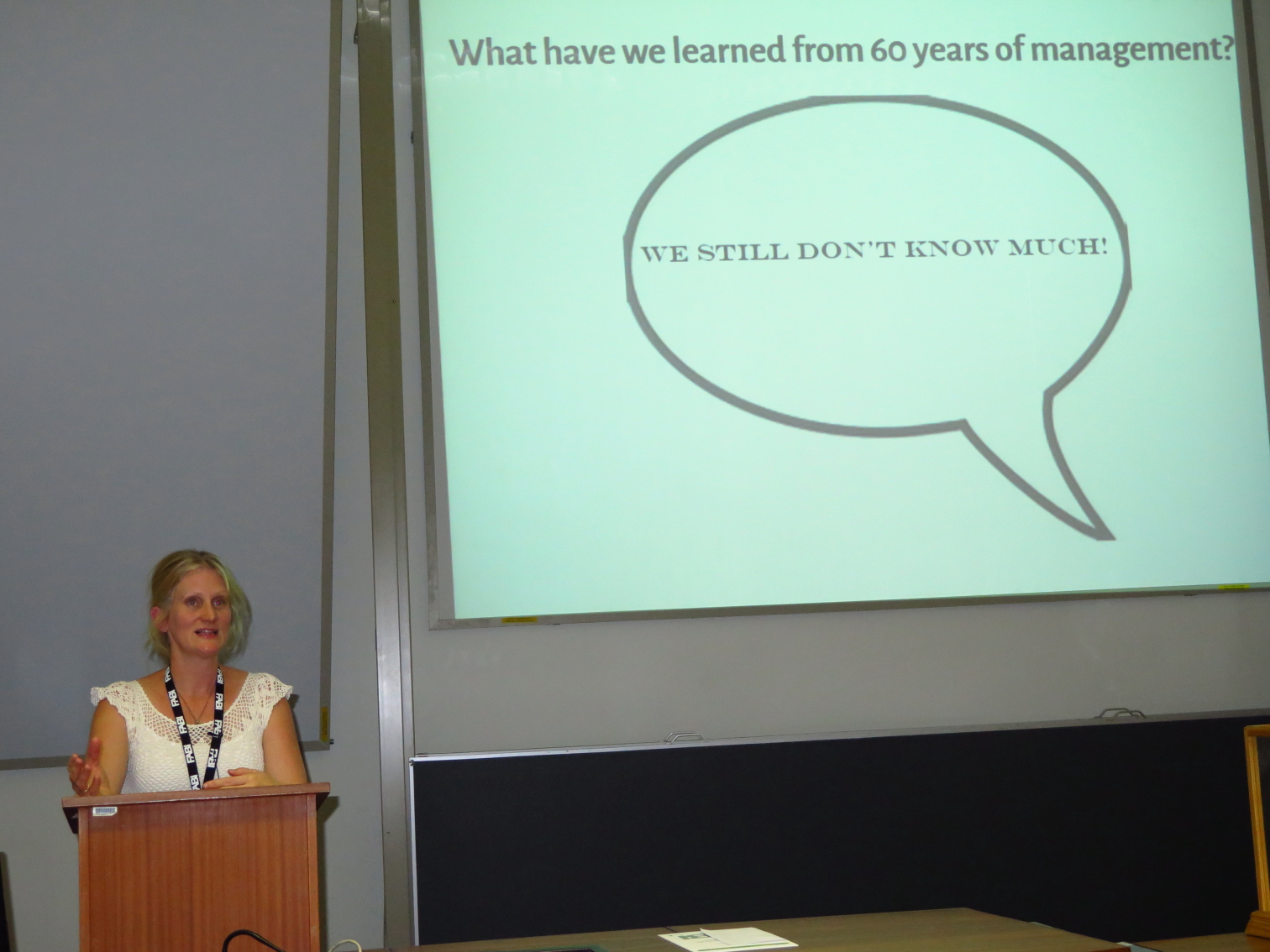 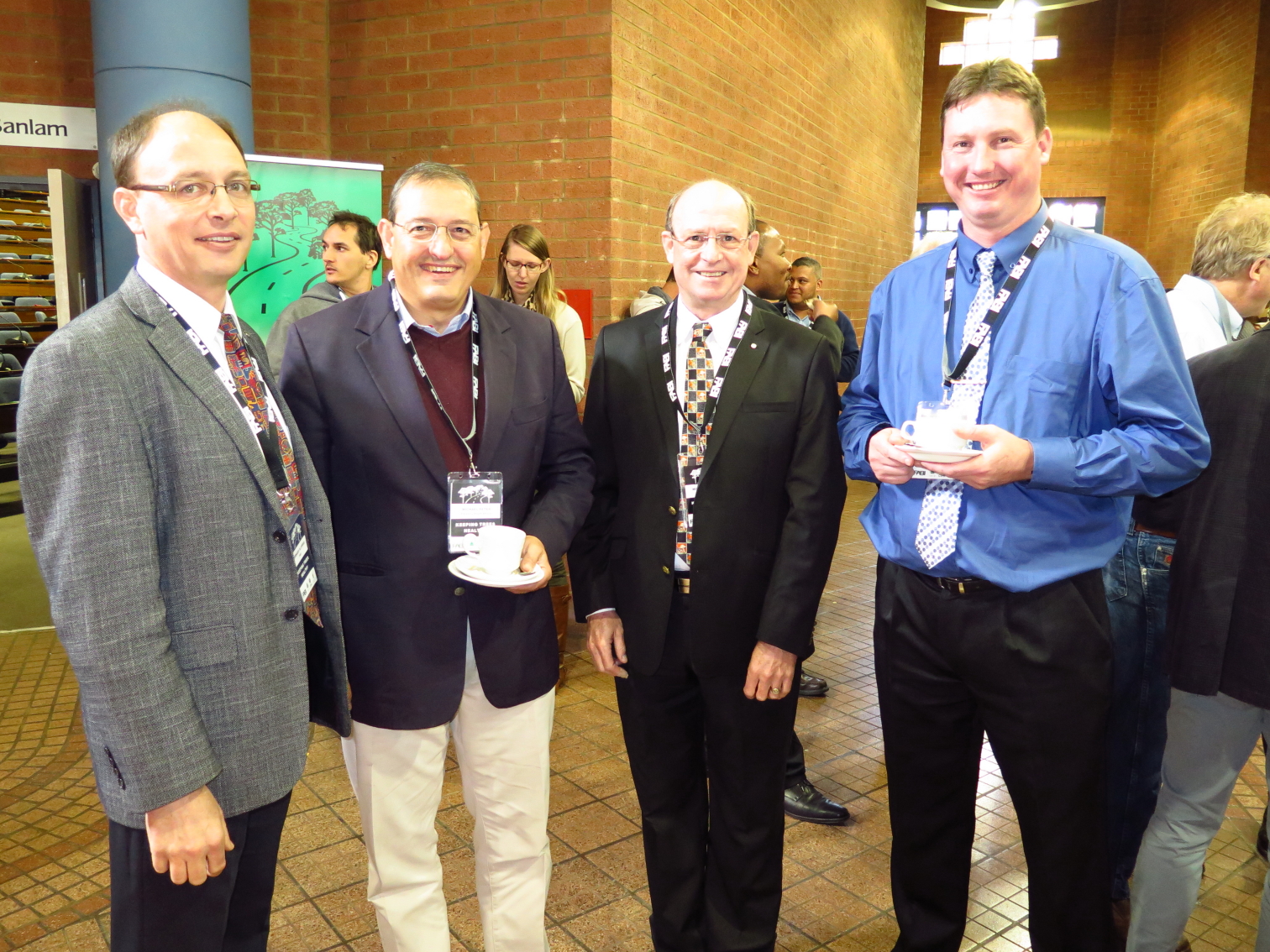 Tree health experts shared the stage with researchers and forestry industry stakeholders at the 29th annual meeting of the Tree Protection Co-operative Programme (TPCP) at the University of Pretoria on 15 and 16 May. In his opening address on 15 May, General Manager of Land and Forestry at Mondi, Themba Vilane described the forestry industry’s struggle with insects pests and diseases as a constant battle between the forces of good and evil. It’s not all doom and gloom, he opined, in his presentation “Armageddon or opportunity”.

“Hidden doors” of collaboration, creativity and ground-breaking research between unlikely partners open up following an “explosion of plagues”, he said. It was on the strength of such opportunities for collaboration and partnerships that programmes such as the TPCP succeed. Dr Ronald Heath of Forestry South Africa commented on the benefits of the industry investing in research and development. In his visual presentation, founding Director of FABI Prof Mike Wingfield shared highlights from the previous year and the history of TPCP, on whose foundation FABI was established.

Researchers in the TPCP and their global partners shared their experiences with their respective control and management strategies against insect pests and pathogens affecting tree species of economic importance such as Eucalyptus, Pinus and Acacia mearnsii.

Dr Andrew (Sandy) Liebhold of the Northern Research Station at the US Forest Service discussed the importance of studying patterns of insect invasions by reflecting on some historic invasions such as the introduction of Agrilus planipennis to North America in 2002 and its destruction of Fraxinus species.

Dr Geoff Pegg of the Department of Agriculture and Fisheries in Queensland, Australia, highlighted the devastation of native Myrtaceae by Austropuccinia psidii since its introduction in 2010. The myrtle rust has spread rapidly, infecting about 350 tree species, with some such as Rhodomyrtus psidioides facing extinction.

In his talk “Rust fungi: Clones win the battle, recombination wins the war” Dr Alistair McTaggart of the University of Queensland discussed the benefits of sexual recombination in pathogens as a step towards more sustainable disease management. He argued that knowledge of the life cycle and the sexual stages of fungi such as A. psidii was an important weapon in the war against invasive pathogens.

Prof Brett Hurley spoke about “Insect pests in plantation forests in South Africa and their management” including native species such as Kotochalia junoid and Lygidolon laevigatum that are a threat to A. mearnsii as well as indigenous insect species that infest Eucalyptus and Pinus such as Coryphodema tristis and Gonimbrasia cytherea.

Wayne Jones of Sappi shed light on Eucalyptus post-planting root disease syndrome. Prof Brenda Wingfield explained the significance of her DST-NRF South African Research Chairs Initiative (SARChI) Chair in Fungal Genomics on research and development in the field of tree health. She explained that her chair comes with research and equipment grants as well as bursaries for postgraduate students and postdoctoral fellows.

Dr Helen Nahrung of the University of the Sunshine Coast in Australia presented “Sirex in Australia: What have we learned from 60 years of management?” The talk focused on the challenges in Australia’s management strategies for the invasive wood wasp Sirex noctilio. She concluded that the S. noctilio system was complex and unpredictable and that there was “a lot” that scientists did not know about.

PhD students Katrin Fitza and Osmond Mlonyeni discussed Sirex research at FABI, which focuses on the interaction between S. noctilio, the fungus it vectors, Amylostereum areolatum and the nematode biological control agent Deladenus siricidicola. The Institute’s Biological Control Centre supplies the forestry industry in southern Africa with the nematode D. siricidicola. Sirex research at FABI therefore focuses on improving the performance of the nematode to ensure that it corresponds with the genetic diversity of S.noctilio populations as well as the different fungal strains of A. areolatum in different parts of the world.

Though one strain of the nematode has been used with great success in the Southern Hemisphere, Katrin argued that biocontrol systems would benefit from greater genetic diversity of the nematode, especially as different lineages have been found to be capable of interbreeding with each other. Osmond dispelled previous suggestions that the fungal strain in South Africa was a clone and instead showed that at least nine fungal strains were present.

Izette Greyling discussed field extension at the TPCP’s Diagnostic Clinic in 2017. Staff and students of the Clinic had been on 51 field trips in 2017, focusing on diseases and pests affecting commercial tree species such as Acacia mearnsii, Pinus and Eucalyptus. The team reported an outbreak of Ceratocystis wilt in A. mearnsii in Mkhondo, Mpumalanga as well as the re-emergence of Gonimbrasia cytherea on Pinus in some provinces. The Eucalyptus snout beetle Gonipterus sp. 2 was still a concern, she said. She cautioned that both mating types of the damaging leaf and shoot pathogenTeratosphaeria destructans were found in SA and that it would only be a matter of time before myrtle rust was found on Eucalyptus. Her warning to  the industry was to guard agains being complacent about the pine pitch canker pathogen Fusarium circinatum.  Her presentation aptly set the tone for three speed talks (five-minute presentations) by PhD students on their research.

Tayo Adenigba discussed the role of fungal peptide pheromones in the management of pitch canker disease. She revealed that receptor genes were central to controlling sexual reproduction and spore generation in the pathogen. Thus, replacing a gene of interest with an antibiotic gene could possibly support the management of pitch canker disease. Mmatshepho Phasha discussed the relevance of understanding the molecular mechanisms that F.circinatum uses to attack trees in her talk “Characterisation of virulence (and pathogenicity) factors in Fusarium circinatum”. Benedicta Swalarsk-Parry closed the session by discussing the role of QTL analysis in studying key phenotypic traits in F.circinatum by looking at variations with other species such as F. temperatum.

Prof Alberto Santini of the Italian National Research Council illustrated how human migration and key events in history such as wars and technological advances had contributed to the introduction of new insects and pathogens to areas where they were previously unknown. He showed how, for example, the invention of the steamboat sped up travel between vast distances but also meant humans could increasingly transport live plant and animal material, and therefore new pests and diseases.

Prof Sanushka Naidoo showed that gene-editing tools were not limited to precision breeding but were useful to understanding the intricate interactions between trees, pathogens and pests in her talk “The genetics and genomics of tree-pathogen/pest interactions”. Dr Irene Barnes discussed the threat of Dothistroma septosporum, the causal agent of Dothistroma needle blight, to pines in South Africa. This is especially because new species of pine such as Pinus tecunumanii are being planted to replace Pinus patula and the former species is highly susceptible to infection by the pathogen.

Prof Diana Six of the University of Montana discussed the effects of climate change on trees’ defences against stresses such as warmer temperatures and water scarcity. She explained how these reduced trees’ ability to recover from physiological damage and exposed them to insects and pathogens that were previously not a threat. Changes could be seen not only on individual trees but also on forests and these determined whether ecosystems were lost or whether they evolved with the changes as a result of climate change.