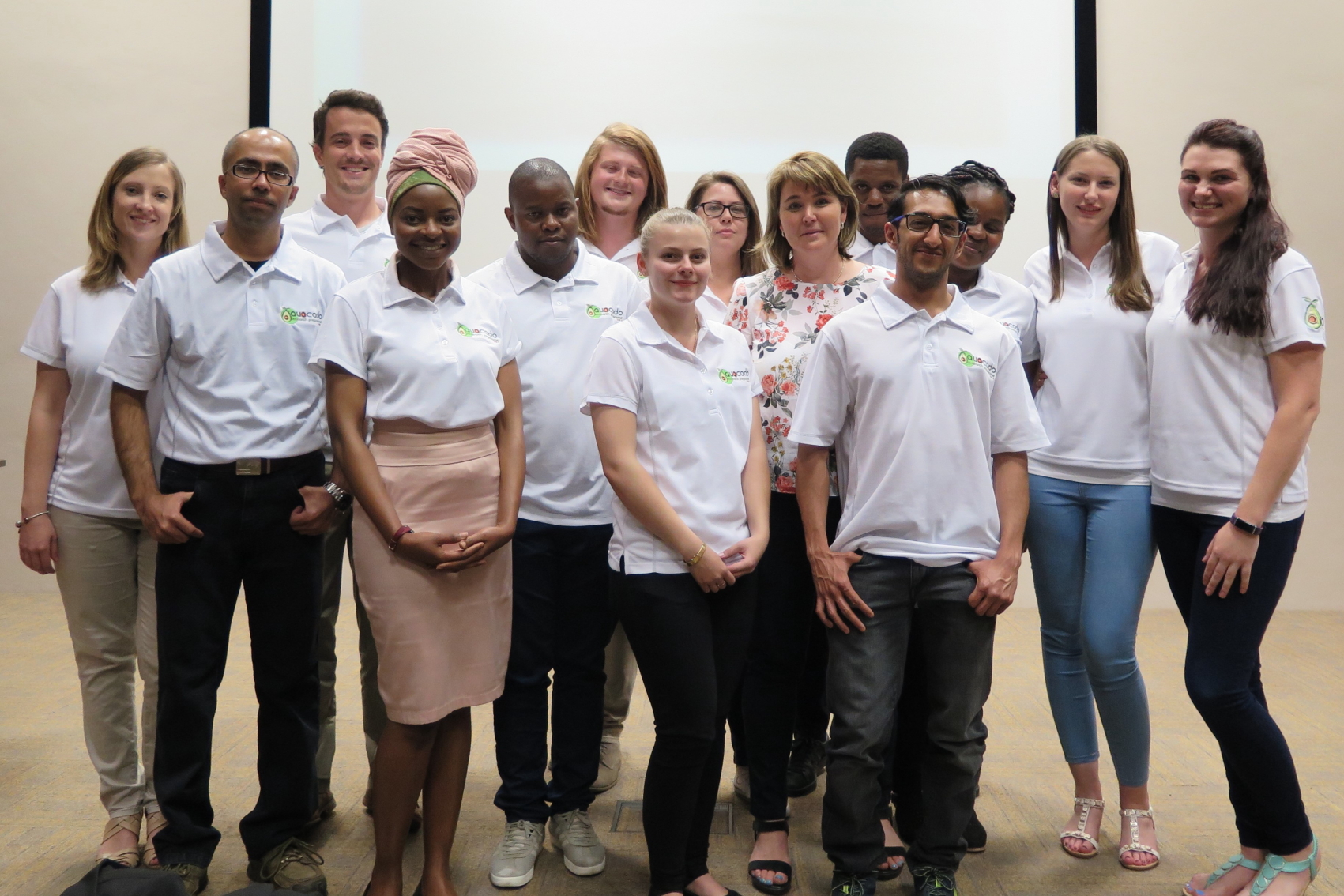 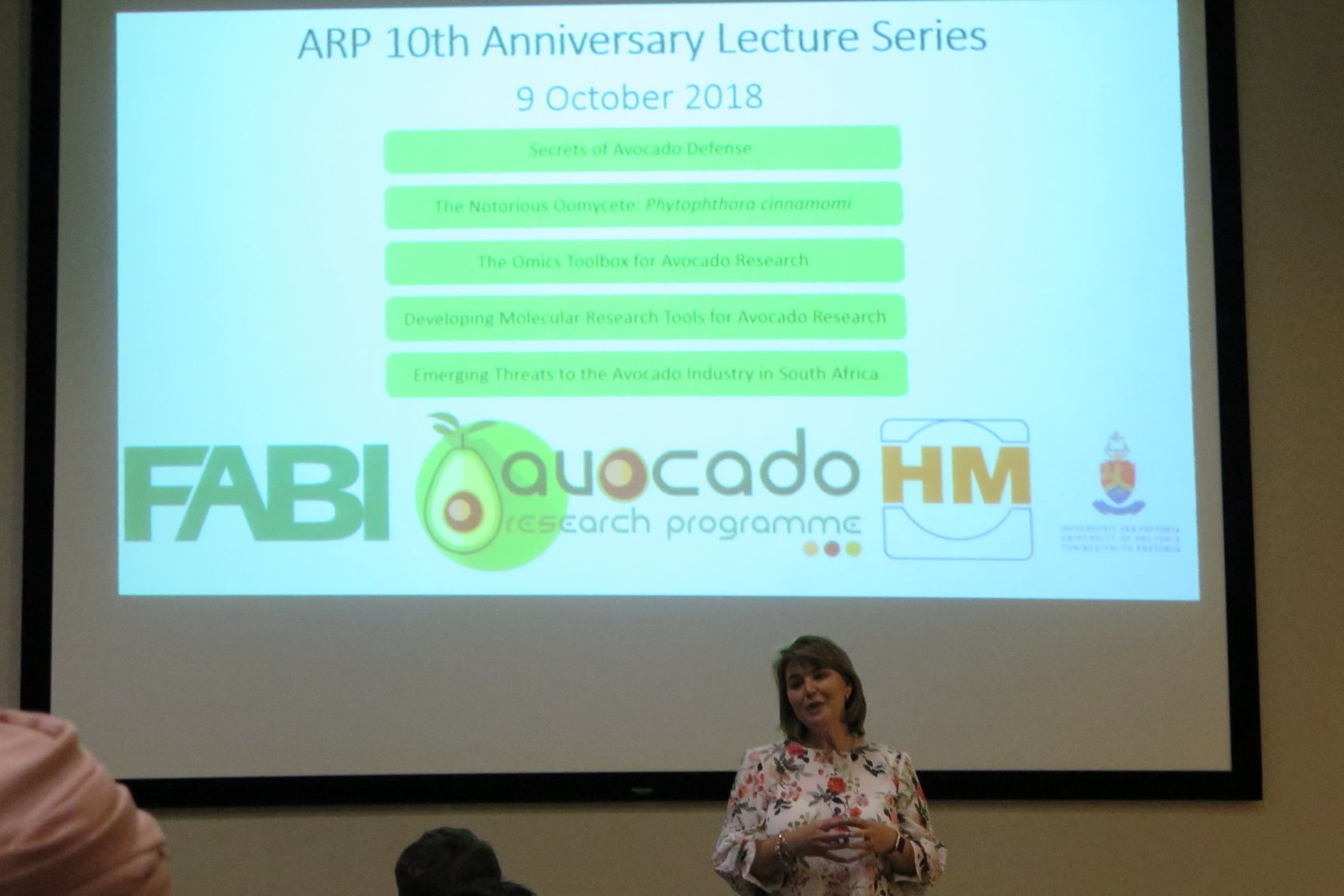 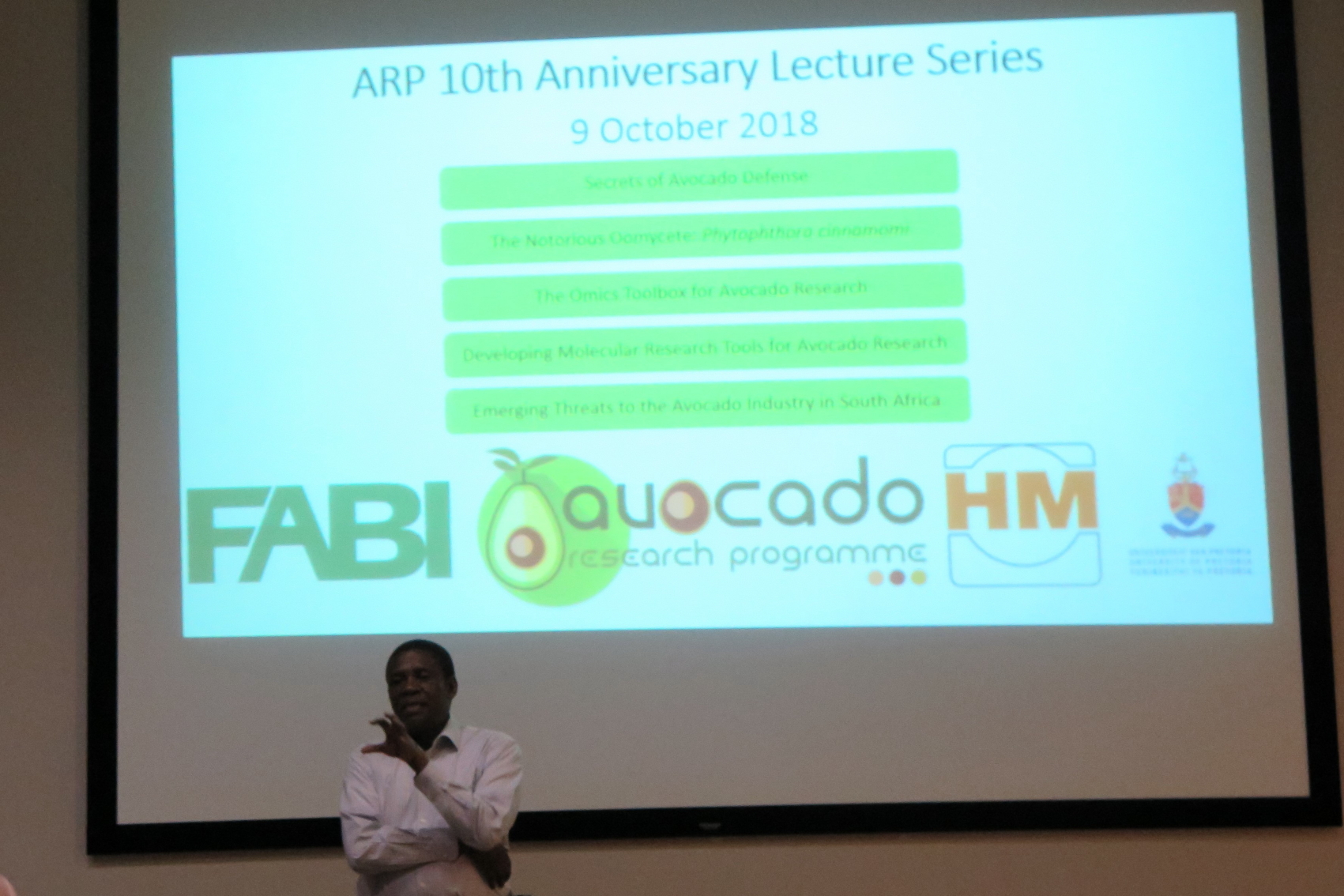 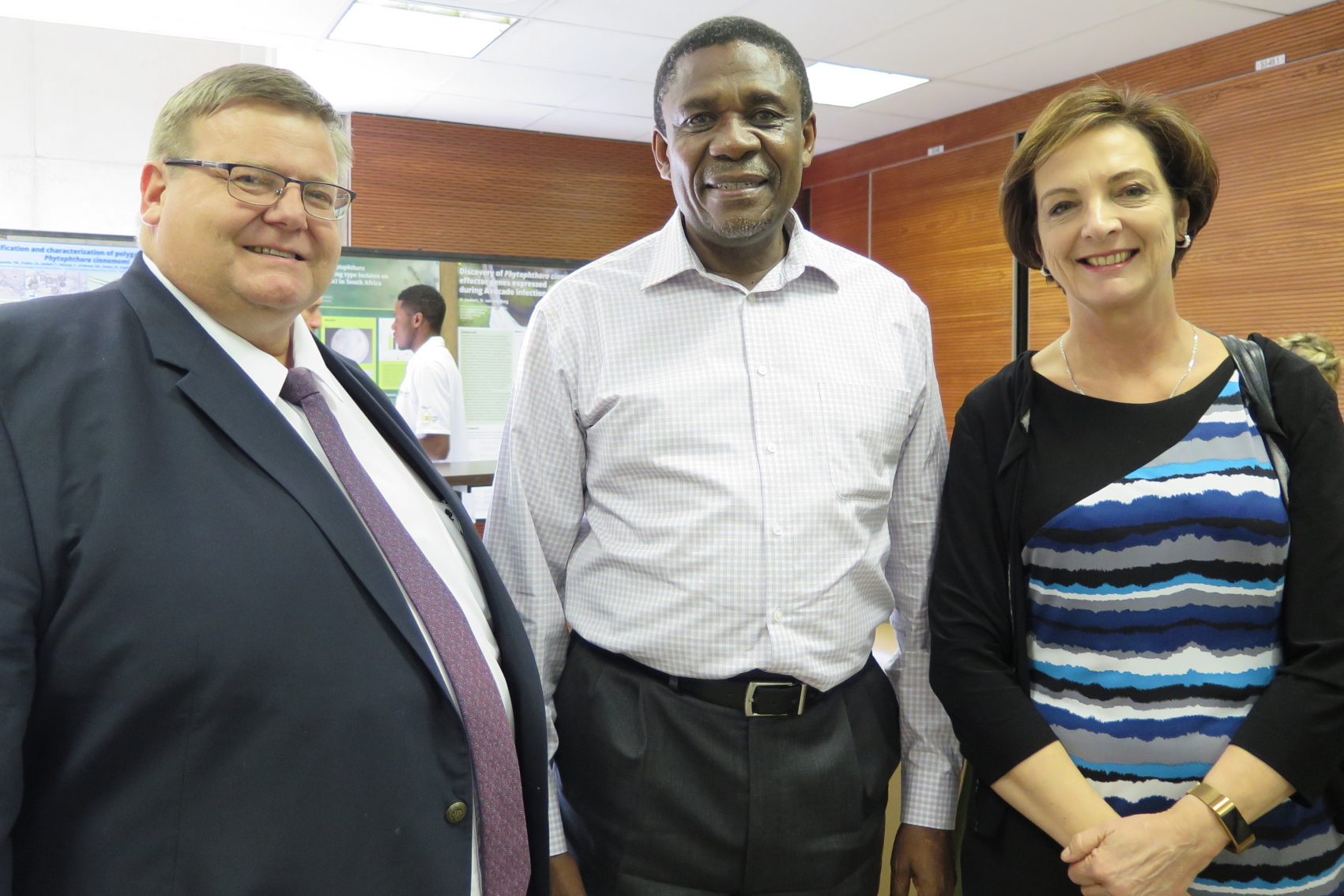 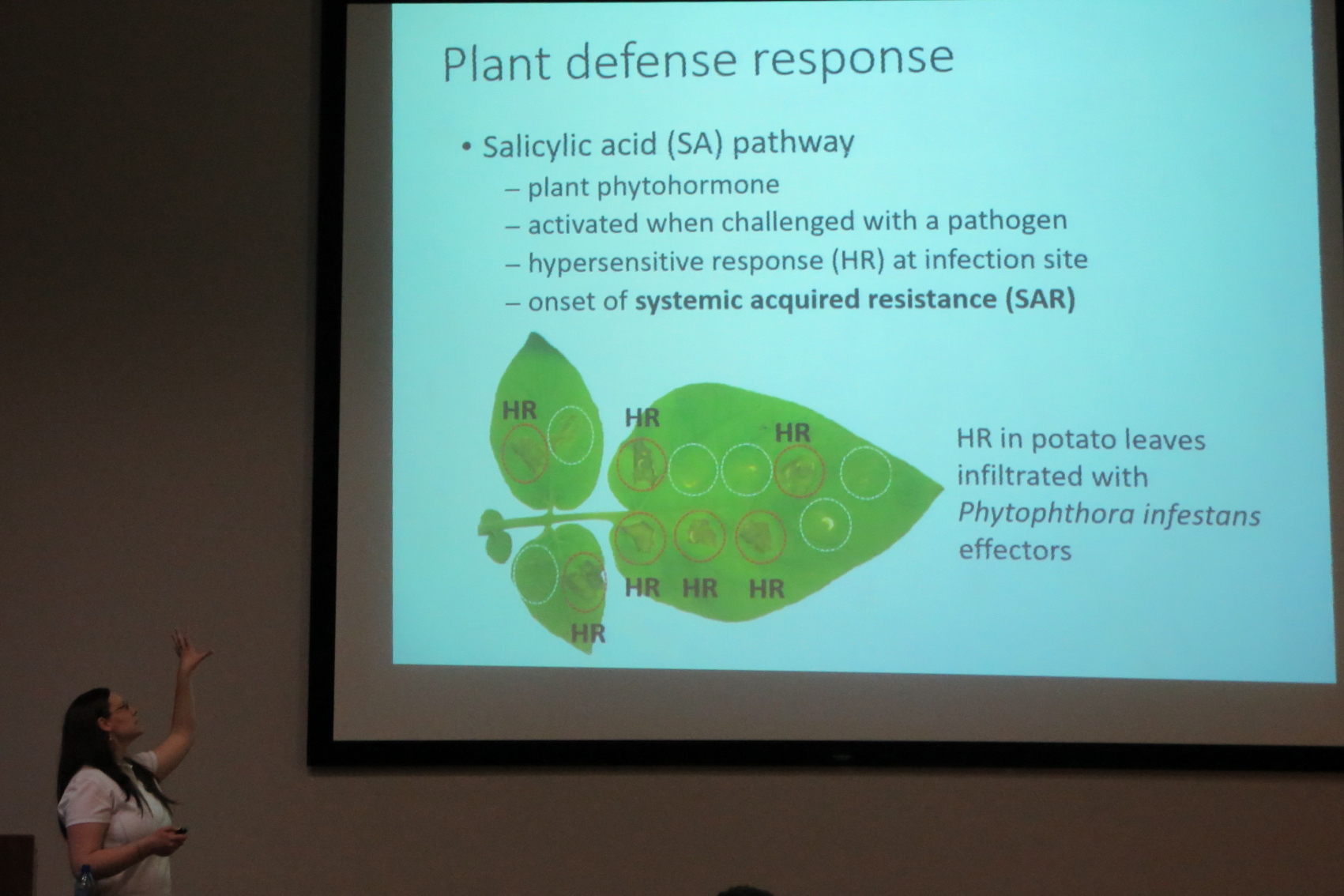 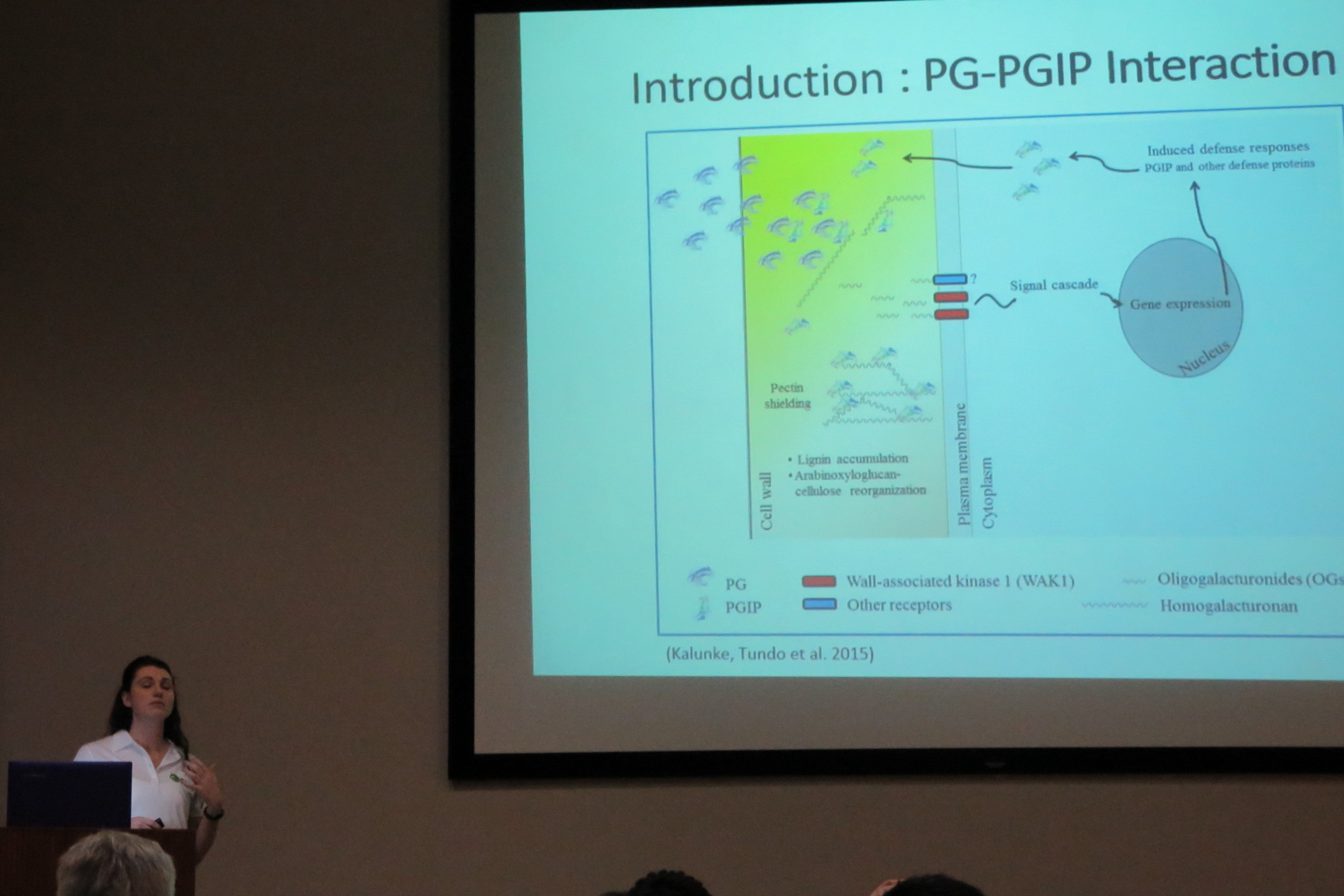 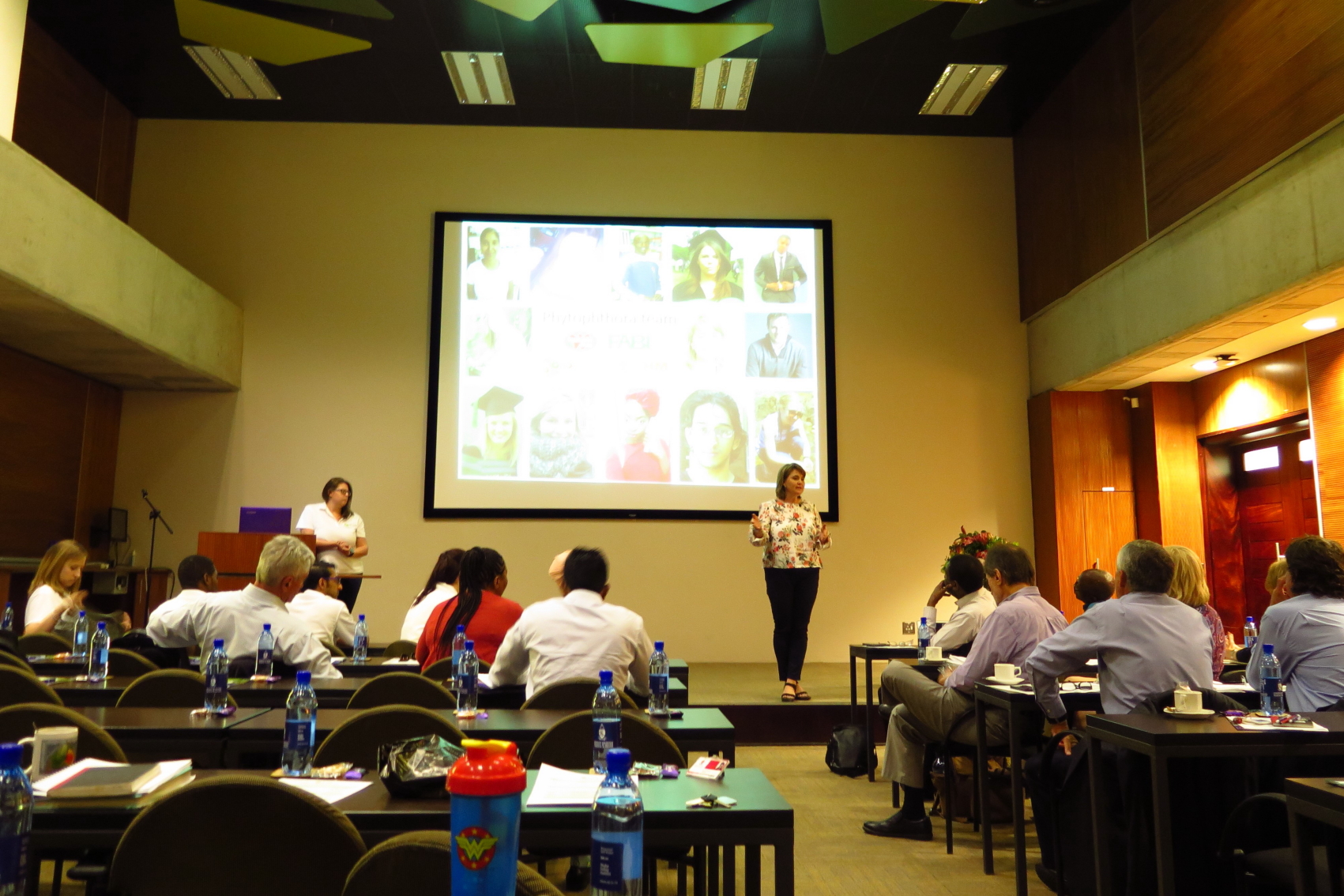 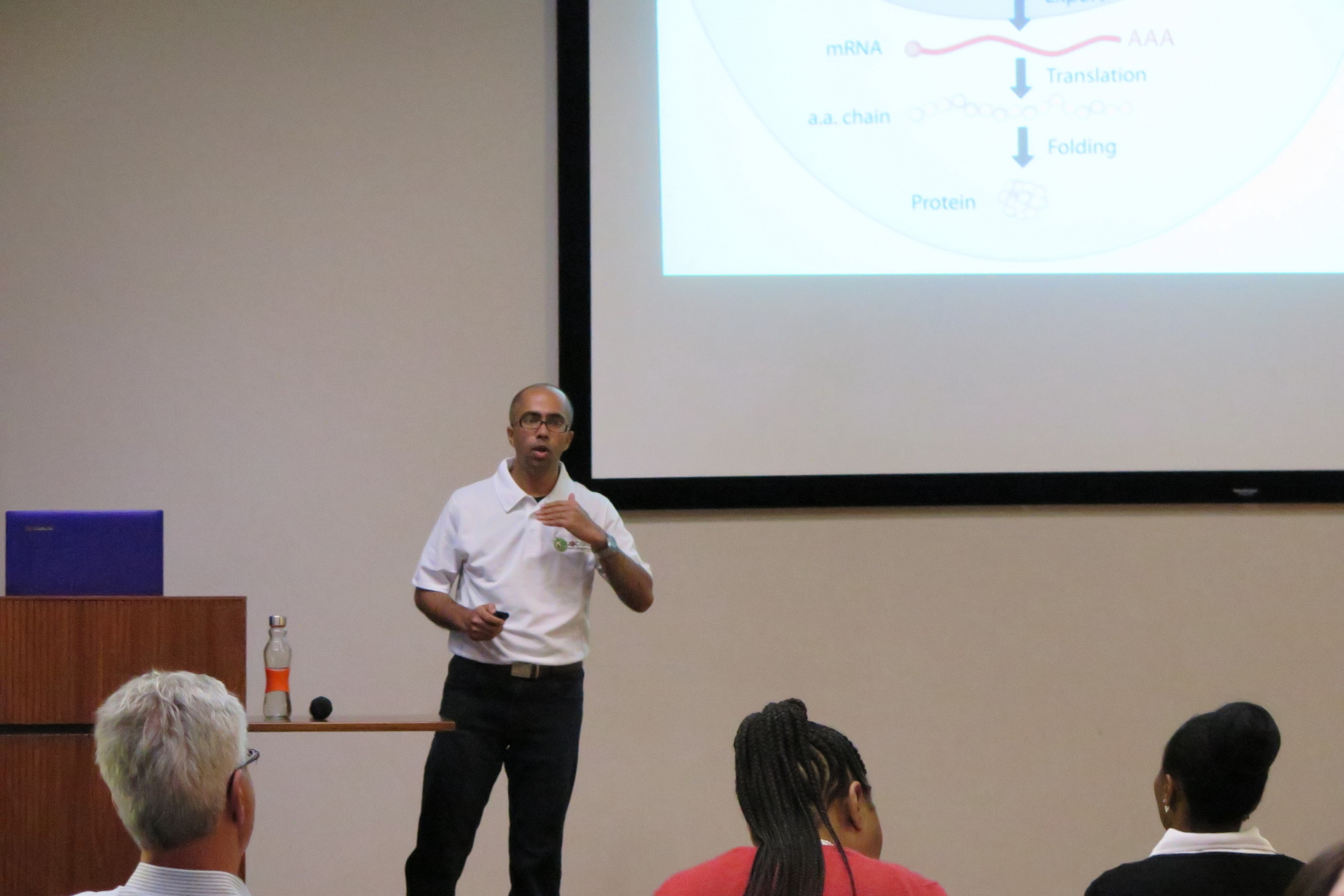 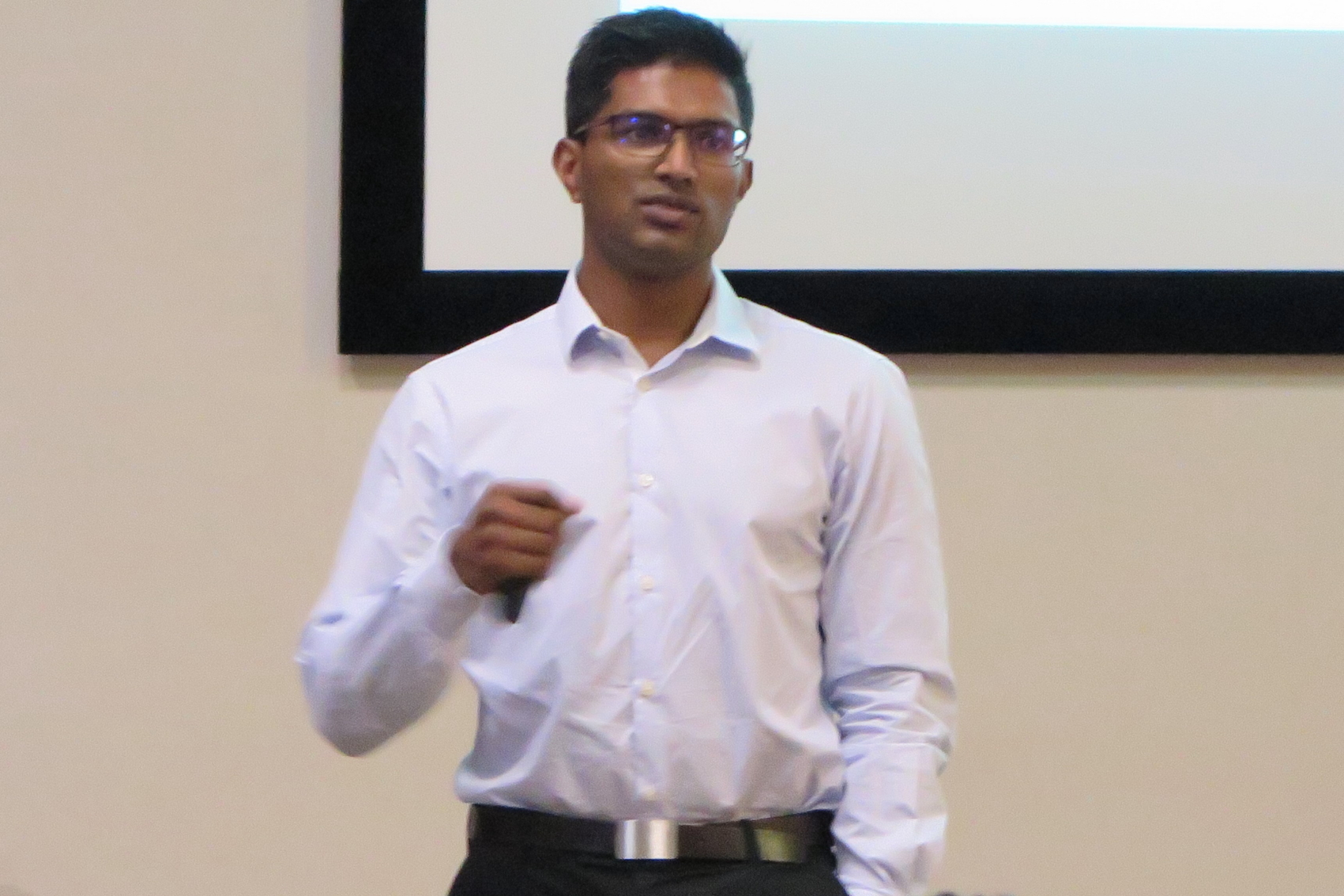 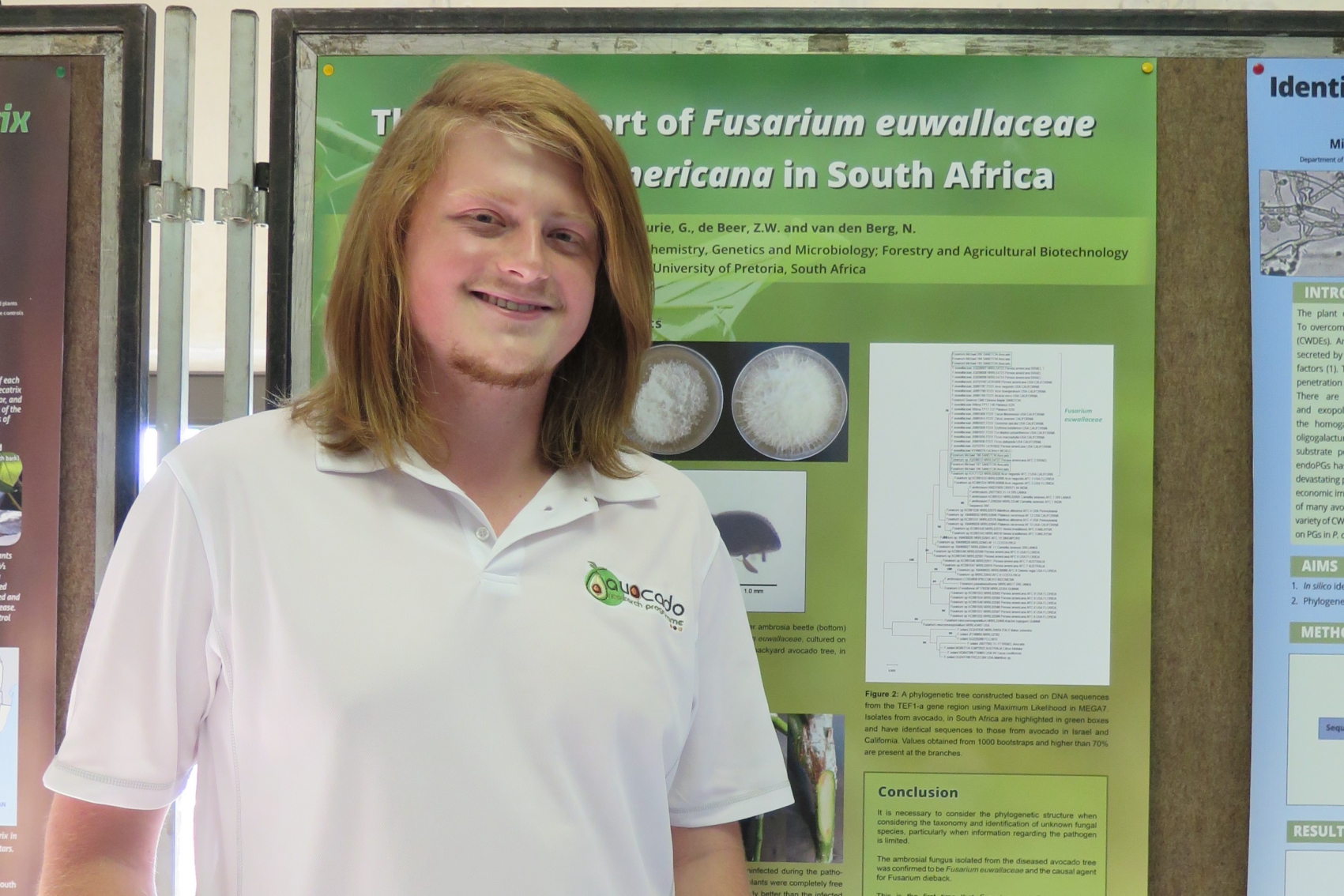 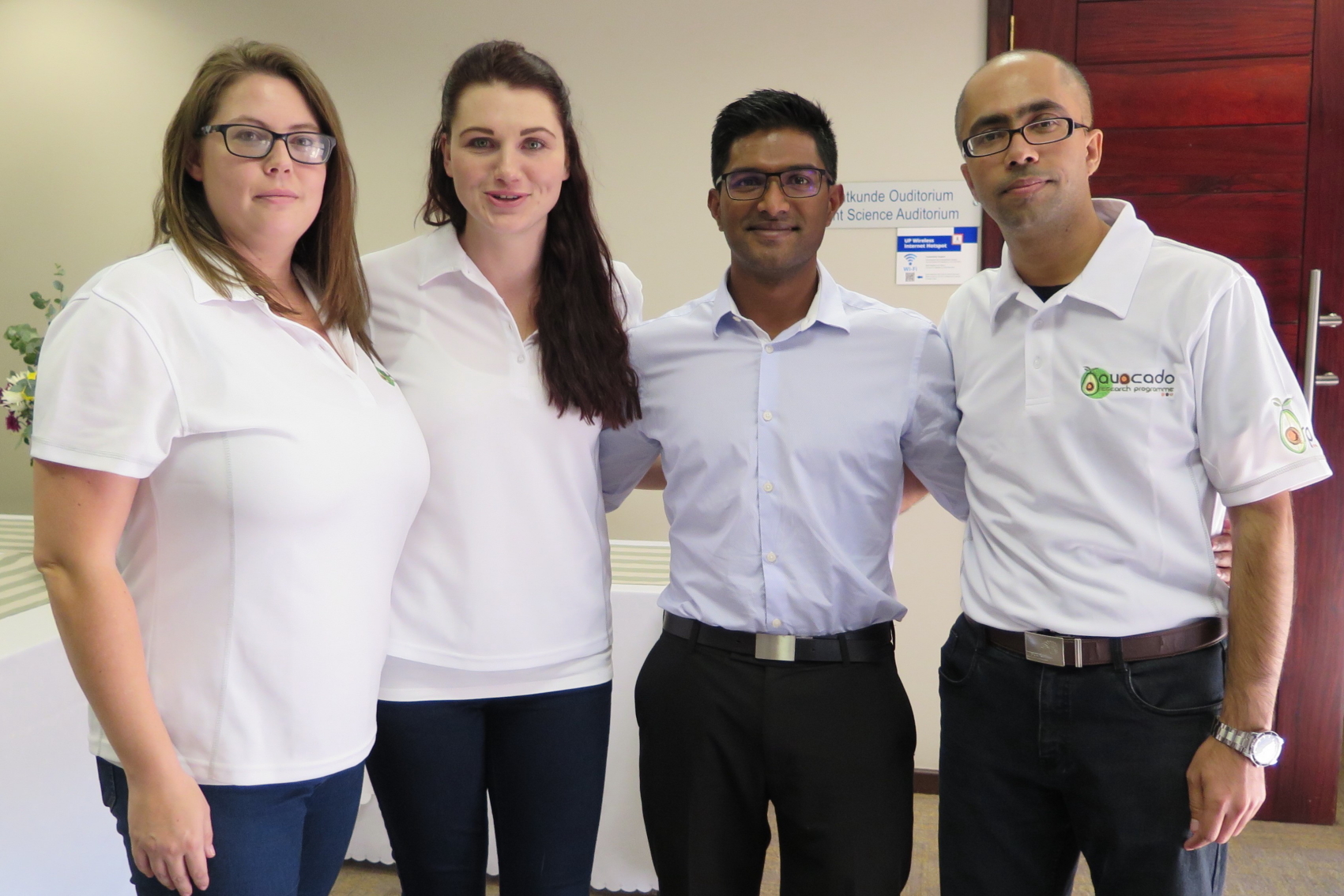 To celebrate 10 years since its launch in 2008, students and postdoctoral Fellows of the Avocado Research Programme at FABI presented lectures on their research at the Plant Sciences Auditorium on 9 October. Formerly the Fruit Tree Biotechnology Programme, FABI Director Professor Bernard Slippers said the ARP had grown into a “world-class programme” under leadership the leadership of Prof Nöelani van der Berg. Dr Khotso Mokhele, President of the Board of Trustees of the Hans Merensky Foundation, which funds the ARP, said he was impressed by the quality of students that have come out of the programme.

Dr Velushka Swart started the lecture series by talking about Persea americana (avocado) defence responses to the oomycete Phytophthora cinnamomi. She described callose deposition in tolerant rootstocks as one of the plant’s key defences against the pathogen, which deploys cell wall degrading enzymes in infecting the plant.

Tsakani Miyambo discussed factors that make P. cinnamomi successful pathogen, including its hemibiotrophic lifecycle, its adaptability to different climate conditions and its ability to infect a wide range of hosts. Melissa Joubert highlighted the role of effector genes and the role they play in infecting the plant. Juanita Hanneman discussed the management of P. cinnamomi including decreased sensitivity of the pathogen to phosphites.

Jesse Hartley spoke about Rosellinia necatrix Bell.ex Prill., a pathogen that causes white root rot on avocado. The death of a tree is often sudden as the plants don’t always show symptoms of infection. Control measure include screening of soil and its treatment with solarisation. Michael du Toit shed light on the threat of Fusarium euwallaceae, a fungal pathogen vectored by the polyphagous shot hole borer, a beetle that was reported in South Africa for the first time in 2017 but was previously reported on avocado in California, USA and Israel.

Dr Sarah Mwangi discussed the use of sequencing technology and the work of the Avocado Genome Consortium in the annotation of the avocado genome. Continuing the discussion on the “omics” of avocado research, Dr Ashok Prabhu spoke about the role of proteomics in advancing rootstock selection, the control of pathogens and advancing wider research on avocado. Robert Backer discussed the benefits of molecular tools to avocado research.