The power of partnerships, basic research and new technologies highlighted at the 30th Annual Meeting of the TPCP 2019-05-19 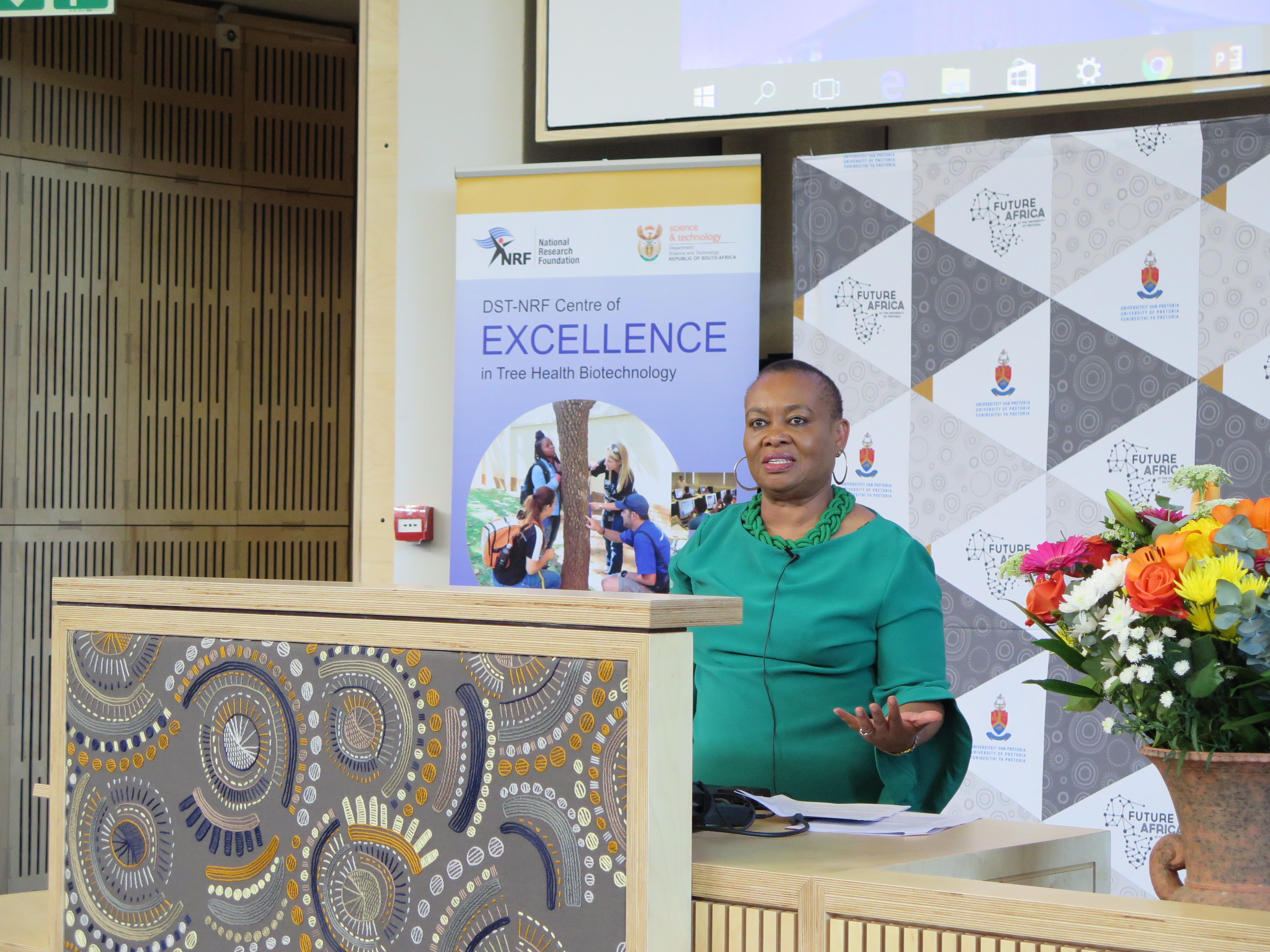 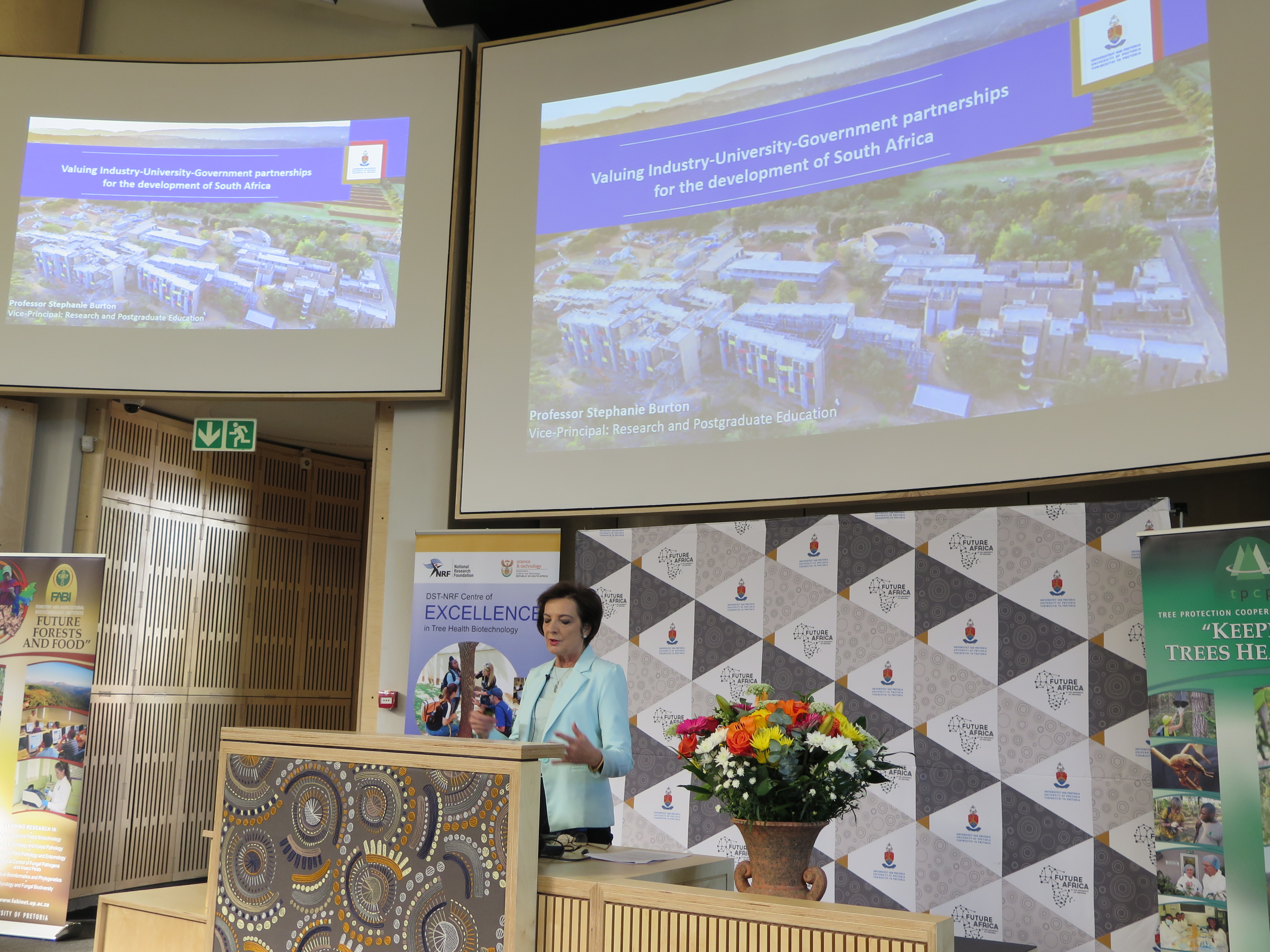 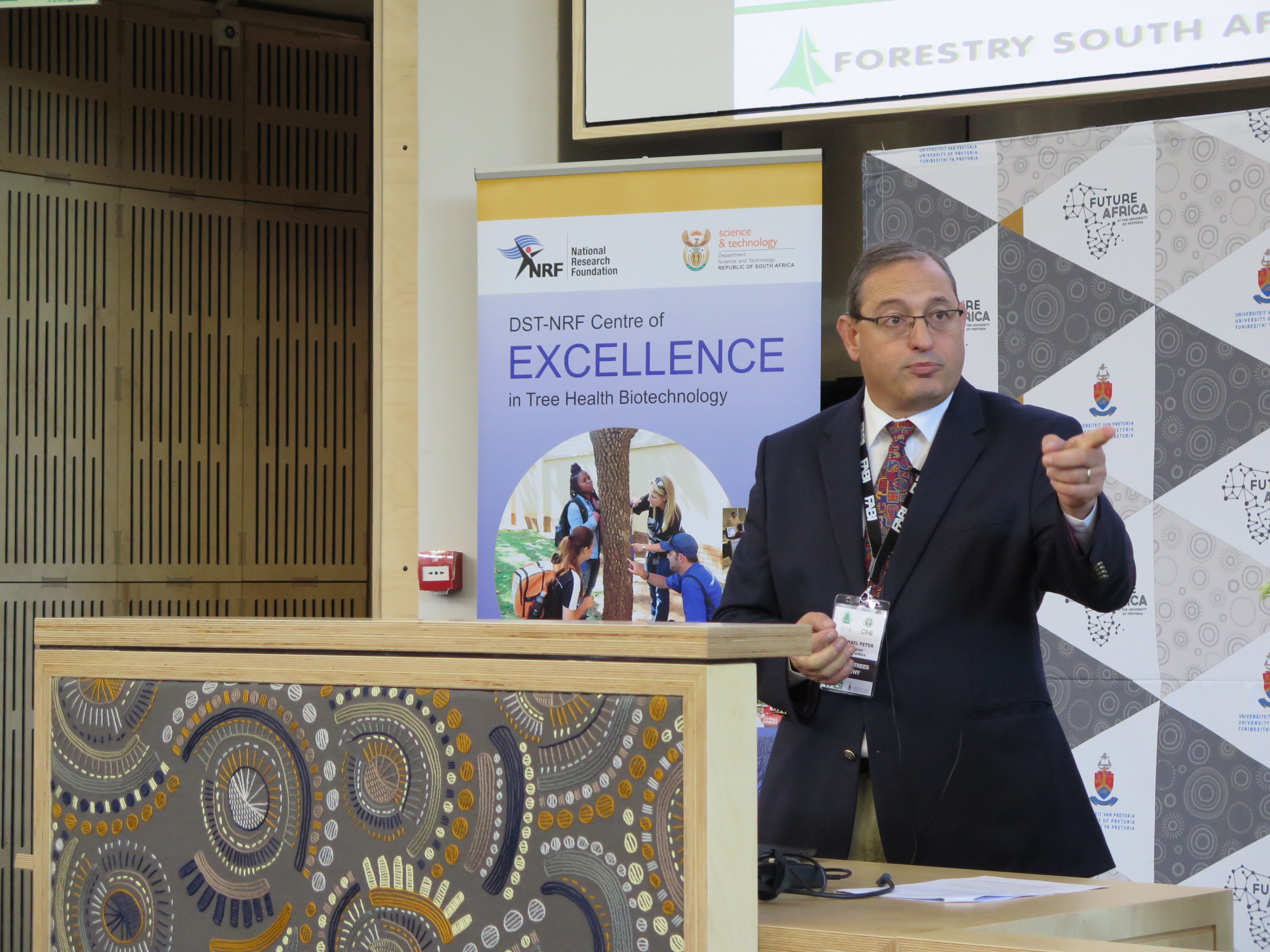 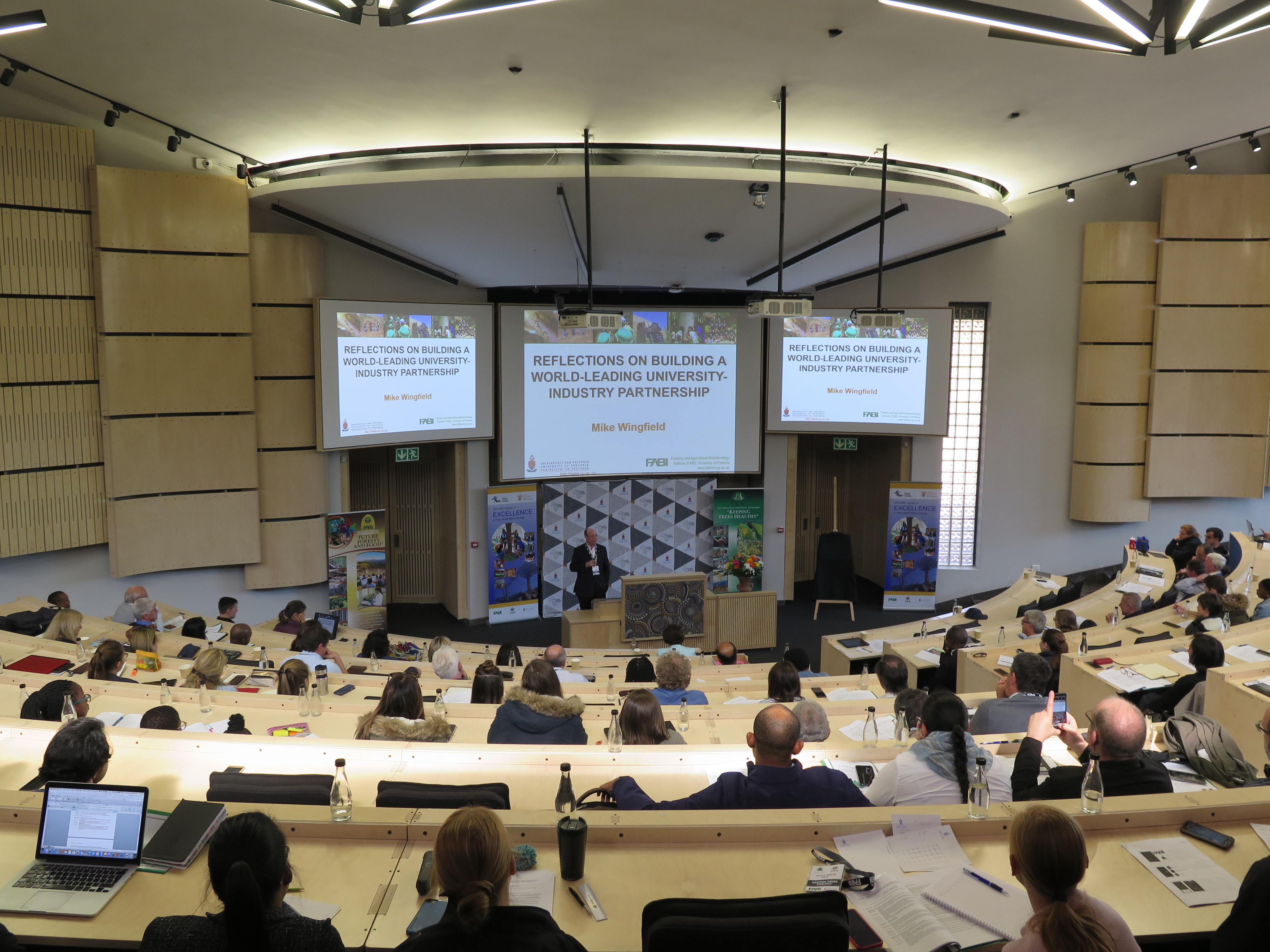 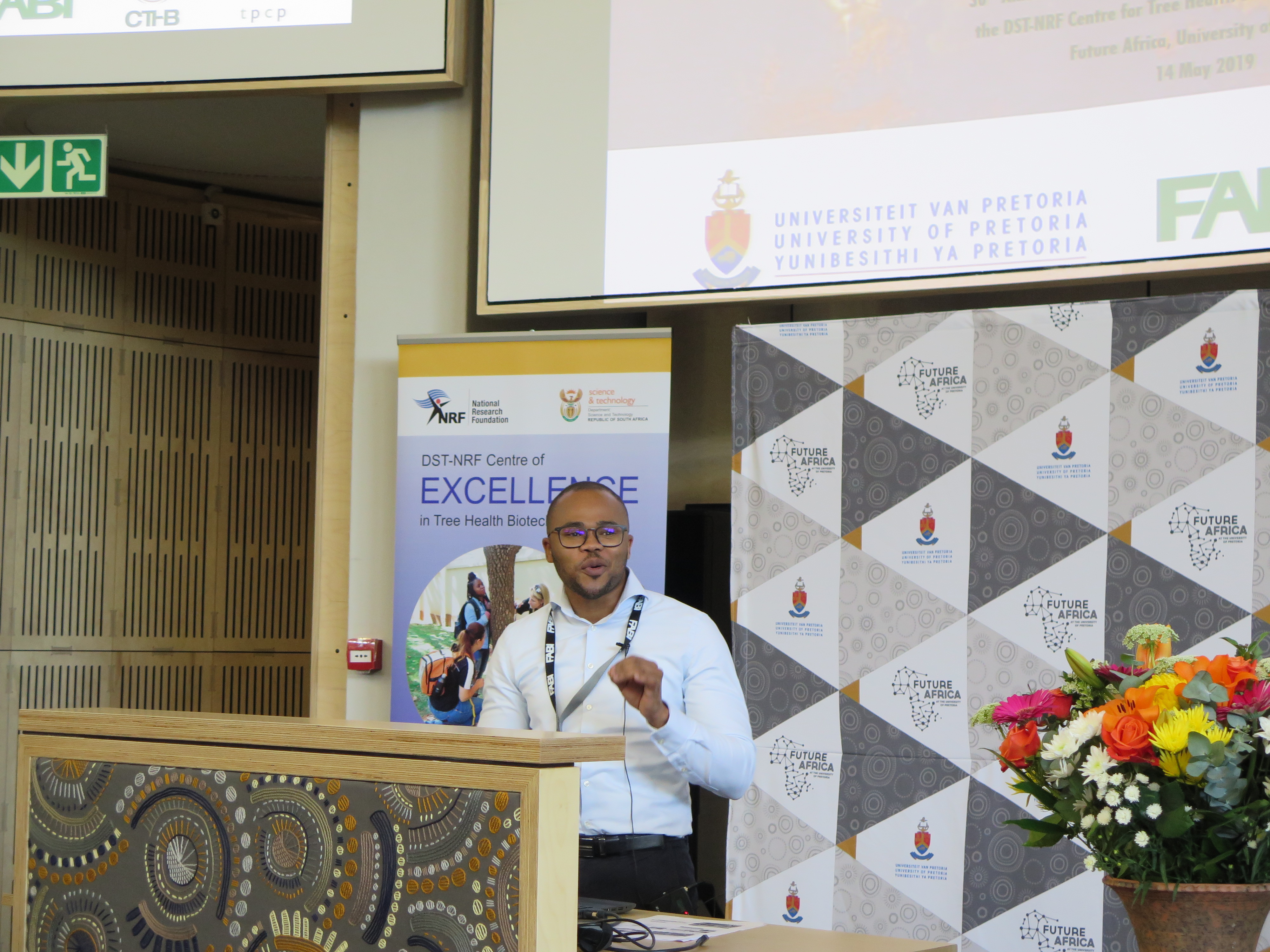 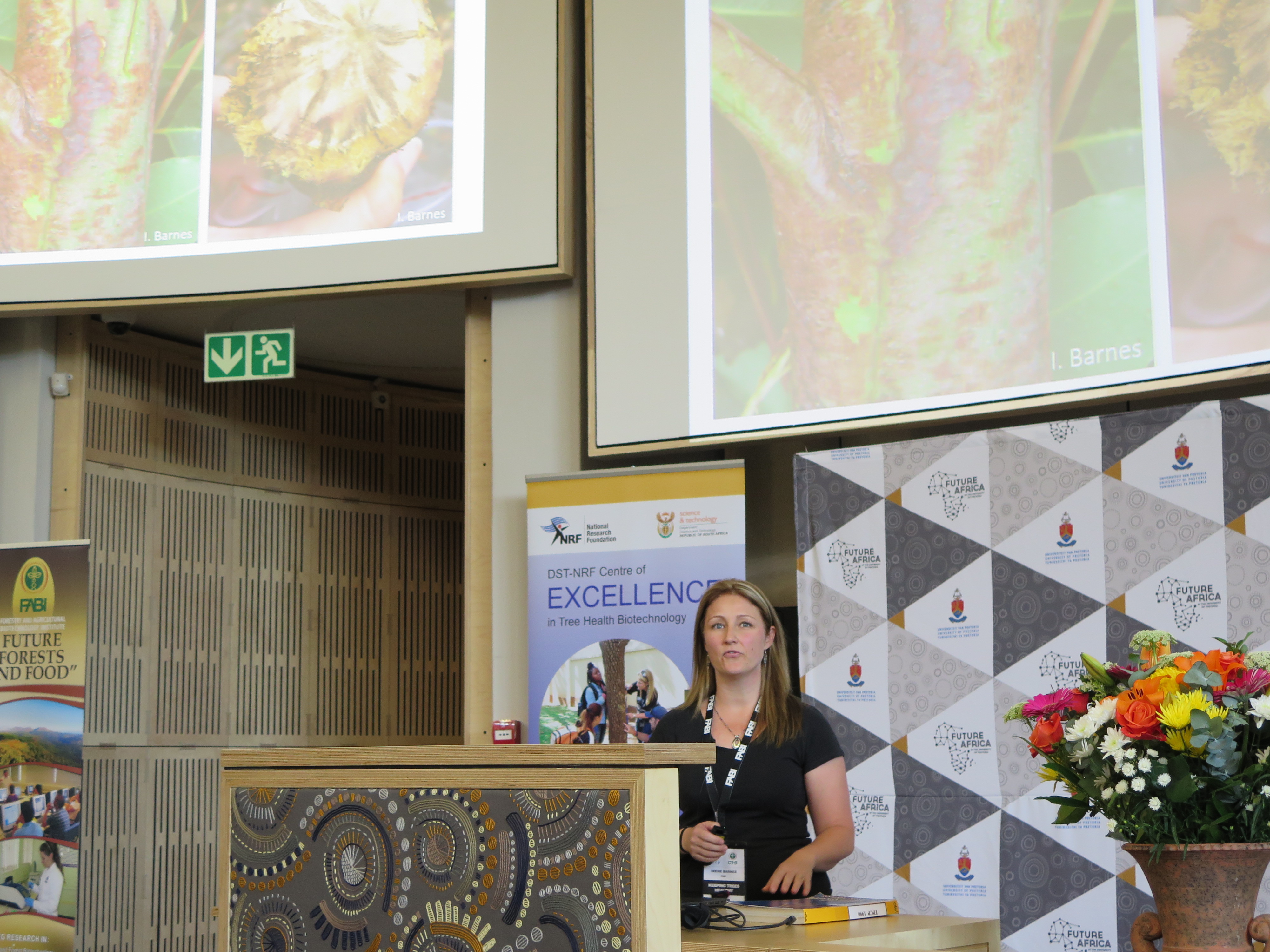 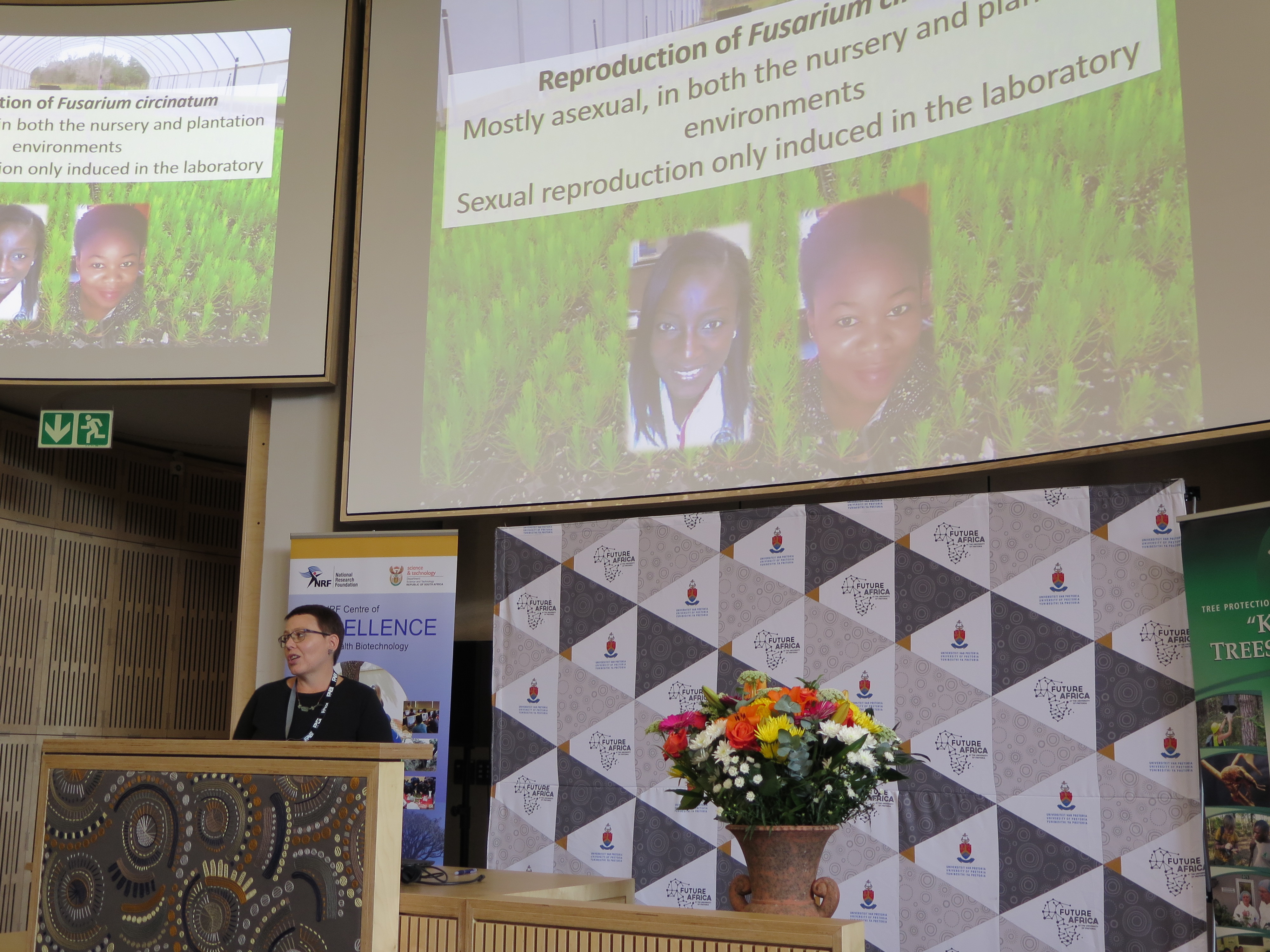 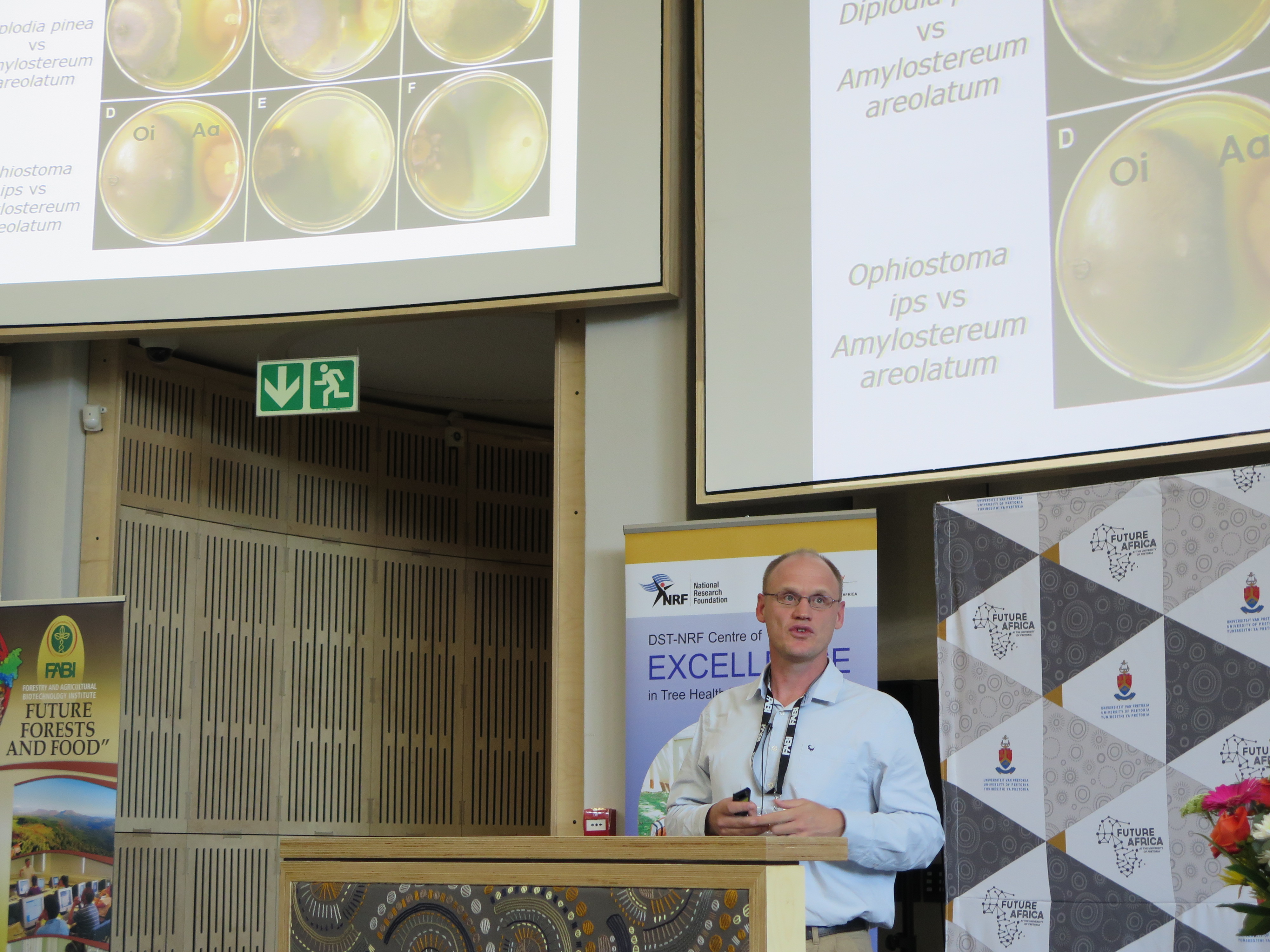 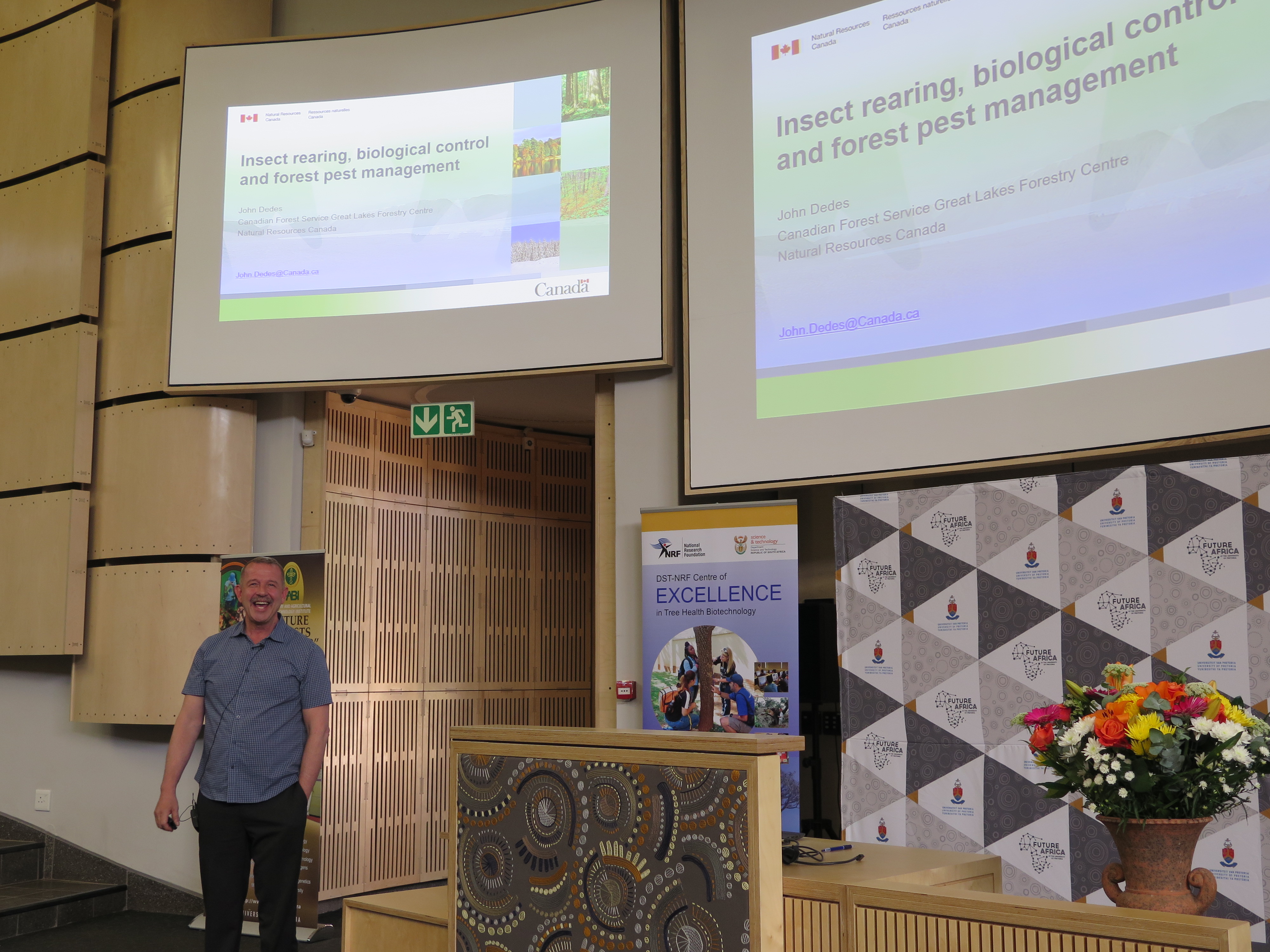 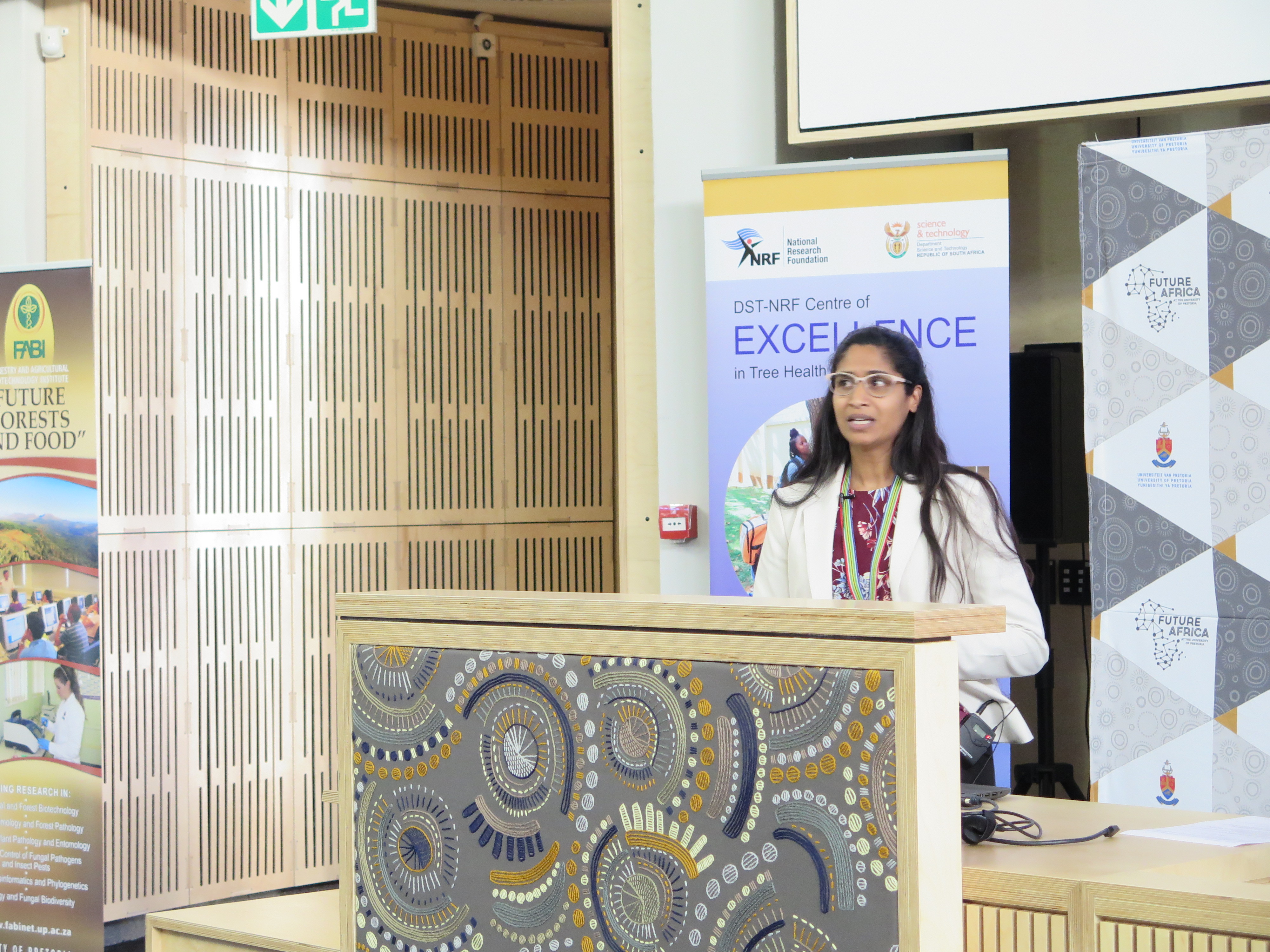 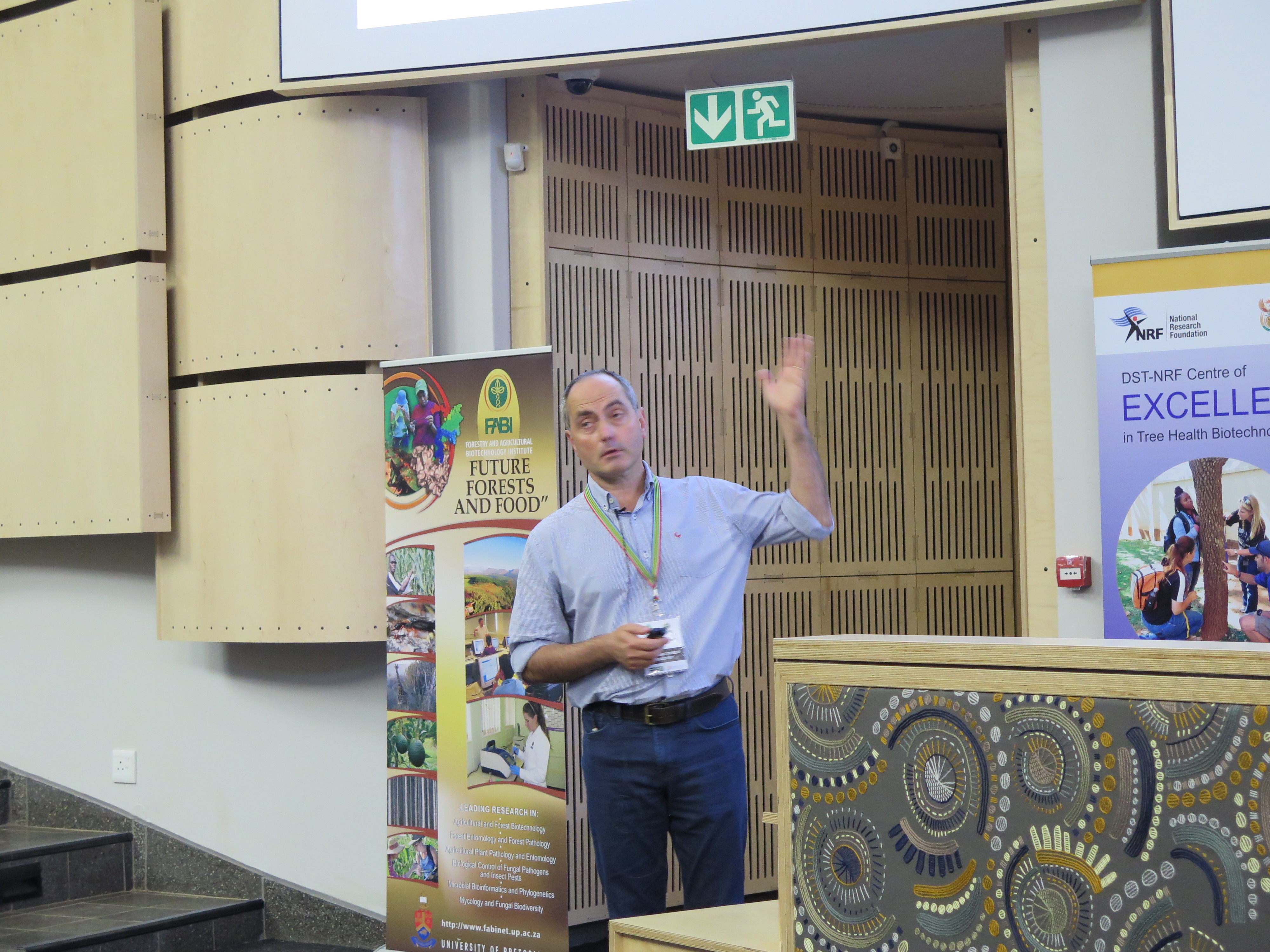 The Tree Protection Co-operative Programme (TPCP) hosted its 30th annual meeting at the University of Pretoria’s Future Africa campus on 14 May. TPCP Director Prof. Bernard Slippers opened the meeting by expressing his excitement at the quality of research presented by students and postdoctoral fellows in the CTHB the day before.

Vice-Principal for Research and Postgraduate Education at the University of Pretoria, Prof. Stephanie Burton, spoke of the synergy in the partnership between the forestry industry, government and the University of Pretoria through the TPCP. Looking back on the history of UP, Prof. Burton highlighted some of the characteristics that make UP a formidable partner in the alliance. She also reflected on how the TPCP could serve as model for other such ventures facilitated by Future Africa, an interdisciplinary research campus at the UP that aims to nurture African researchers and promote research that is on par with the developed world.

Acting Deputy Director in the Department of Agriculture, Forestry and Fisheries, Ms Sebueng Chipeta, reiterated the government’s commitment to working with the forestry industry and academic institutions such as UP to develop forestry as an economic and social driver for development, especially for rural communities. She said the role of the department was to conserve forest resources, which act as a “safety net” and were important to alleviate poverty.

Manager of Partnerships and Programmes for Innovation at Future Africa, Dr Osmond Mlonyeni, highlighted opportunities for UP’s experimental farm to collaborate with other research centres in the formation of a Research and Innovation Park. His talk was titled “Developing the smartest corner in Africa: Programmes and partnerships for innovation through the UP experimental farm”. He argued that the experimental farm’s proximity to Future Africa, which is home to three programmes tailored to nurture young African researchers, and other institutions such as the Council for Scientific and Industrial Research (CSIR), make it the ideal space to develop what can become the leading research hub in Africa.

Prof. Brett Hurley reflected on the achievements of the team working on Sirex noctilio in his presentation: “Sirex research in the TPCP: Global leadership and local impact”. He listed improving tools for monitoring, the development of new methods in Sirex management, and developing capacity and expertise for pest management research, as some of these achievements. Prof. Emma Steenkamp highlighted the extensive body of research by students and postdocs on pine pitch canker in her presentation “Fusarium circinatum research: from the basic to the applied”.

Prof. Brenda Wingfield chronicled the establishment of the CTHB and its contribution to the TPCP in its 15-year existence. She expressed confidence in the CTHB harnessing the skills of its human capital, equipment and collaborations across various areas of agriculture and tree health research to morph into a platform of plant health biotechnology. John Dedes of the Canadian Forest Service, highlighted lessons from his experience in insect rearing and the initiation of a quarantine facility for invasive insects in his talk, “Insect rearing, biological control and forest pest management.

PhD student at FABI and manager of the Institute’s Diagnostic Clinic, Darryl Herron, highlighted the work done by the field and extension team, which includes Samantha Bush, Sandisiwe Jali and Dr Trudy Paap. He touched on plans to expand the clinic’s insect rearing facilities and efforts to improve its screening capabilities, as well as data collection and management. Dr Almuth Hammerbacher discussed the value of greenhouse and field trials in screening for pest and disease resistance in commercial forest trees in her presentation “The dual purpose of disease screening for research and management”.

Five-minute speed talks by students and postdocs included a presentation by PhD student Josephine Queffelec on the potential of Wolbachia, a bacterial symbiont that modifies the reproductive biology of its insect hosts, as a complementary biological control agent against S. noctilio. She said results showed that the infection levels of Wolbachia in S. noctilio were high in South Africa, but that the spread within those populations was slow. PhD student Benedicta Swalarsk-Parry discussed differences in the virulence of Fusarium isolates from five provinces in SA as well as isolates from other countries in her presentation “Understanding variation in Fusarium virulence”. She found that isolates from the Western Cape were not as virulent as isolates from the other provinces and that some international isolates were more virulent than South African isolates. Dr Felix Fru discussed recurring F. circinatum outbreaks in nurseries in his talk “Fusarium circinatum outbreaks: What have learnt over the last year?” His study found that nursery populations were genetically diverse and that plantation outbreaks were caused by a few high frequency genotypes. Dr Maria Vivas shared light on how “memories” of a seed’s origin can affect its development in her presentation “The maternal environment matters: Effects on development, resistance and physiology.” She discussed how, for example, a seed from an area affected by drought displayed more efficient use of water and higher drought tolerance than a seed originating from a different environment but growing in the same area.

Dr Illaria Germishuizen of the Institute for Commercial Forestry Research (ICFR) spoke on the relationship between geographic information systems (GIS) and tree health management in her talk “GIS and forest health research: Growing an industry-ICFR-TPCP map.” She described GIS as a powerful tool for data collection and monitoring. Dr Germishuizen recalled how the Sirex National Control Programme, for example, used GIS technology in site selection for lure traps. Prof. Sanushka Naidoo discussed how the sequencing of the Eucalyptus genome paved the way for the selection of desirable traits in her talk “The road to resistance in forest trees”. Dr Tuan Duong showed how next generation sequencing had laid the groundwork for “omics” research (genomics, transcriptomics, proteomics, metabolomics  and  multiomics) and its application in various research projects conducted at FABI.

Prof. Wilhelm de Beer ended the session with a discussion on the polyphagous shot hole borer (PSHB), an ambrosia beetle carrying a symbiotic fungus that poses a danger to South Africa’s urban forests, native trees and natural forests. Prof. de Beer said the country was not prepared for the beetle’s invasion and that responses to the invasion by municipalities and government departments (trees in urban areas are the worst affected) were not coordinated, as the country has never before had to deal with a pest that affects such a broad range of tree species. He said that science-backed data was crucial to inform management strategies by governmental institutions, and that all stakeholders to communicate in “one voice” to the public.