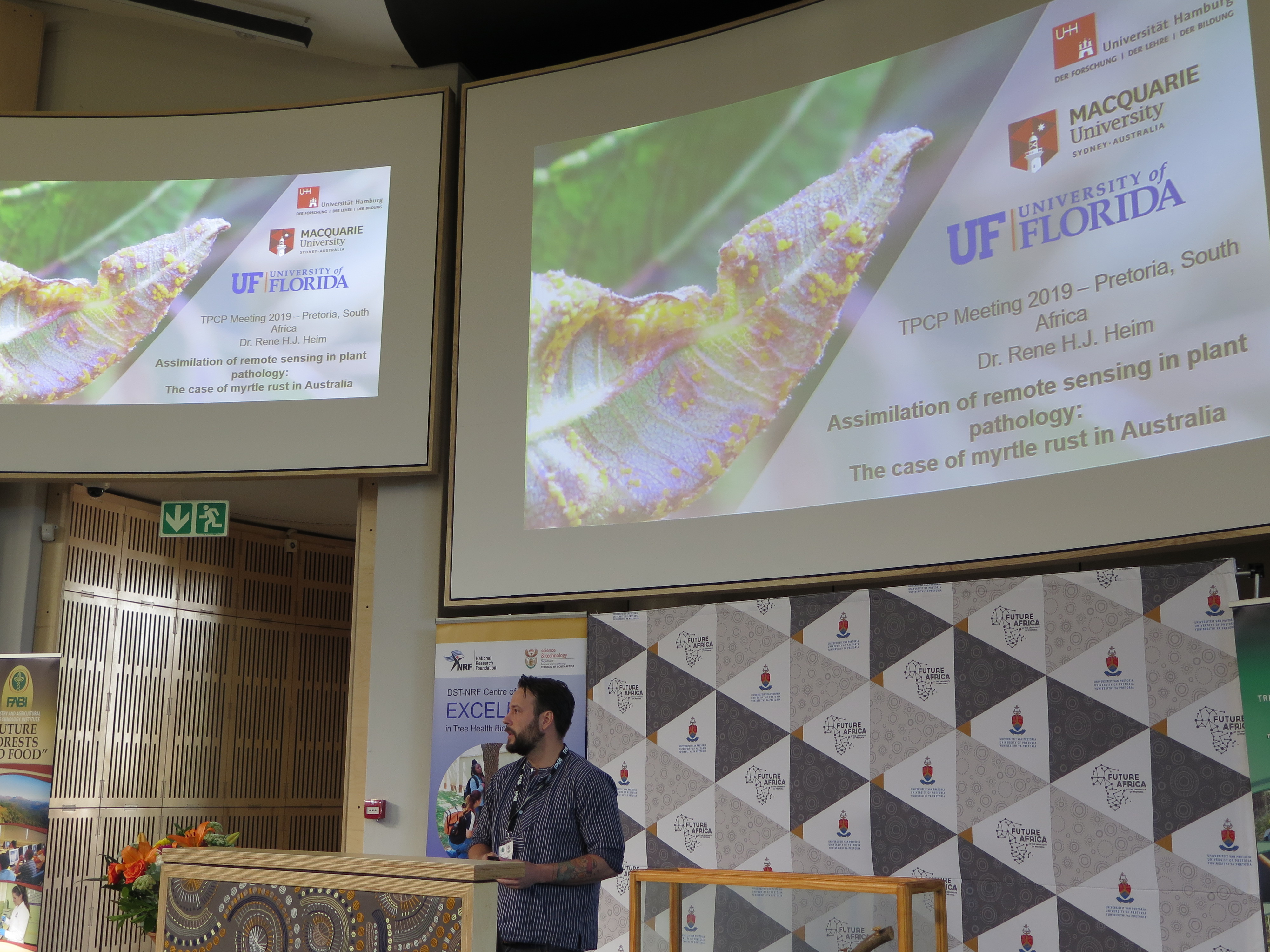 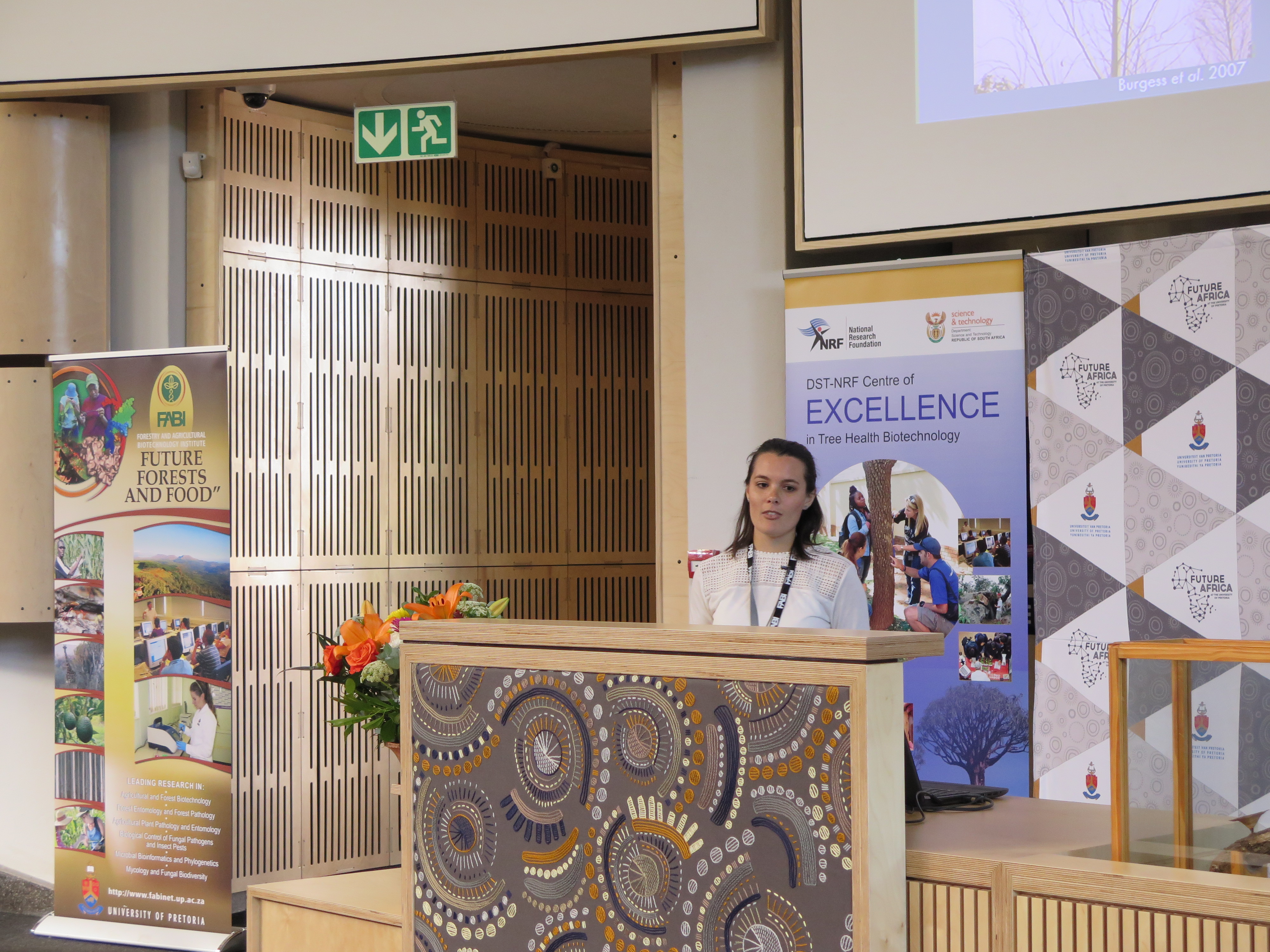 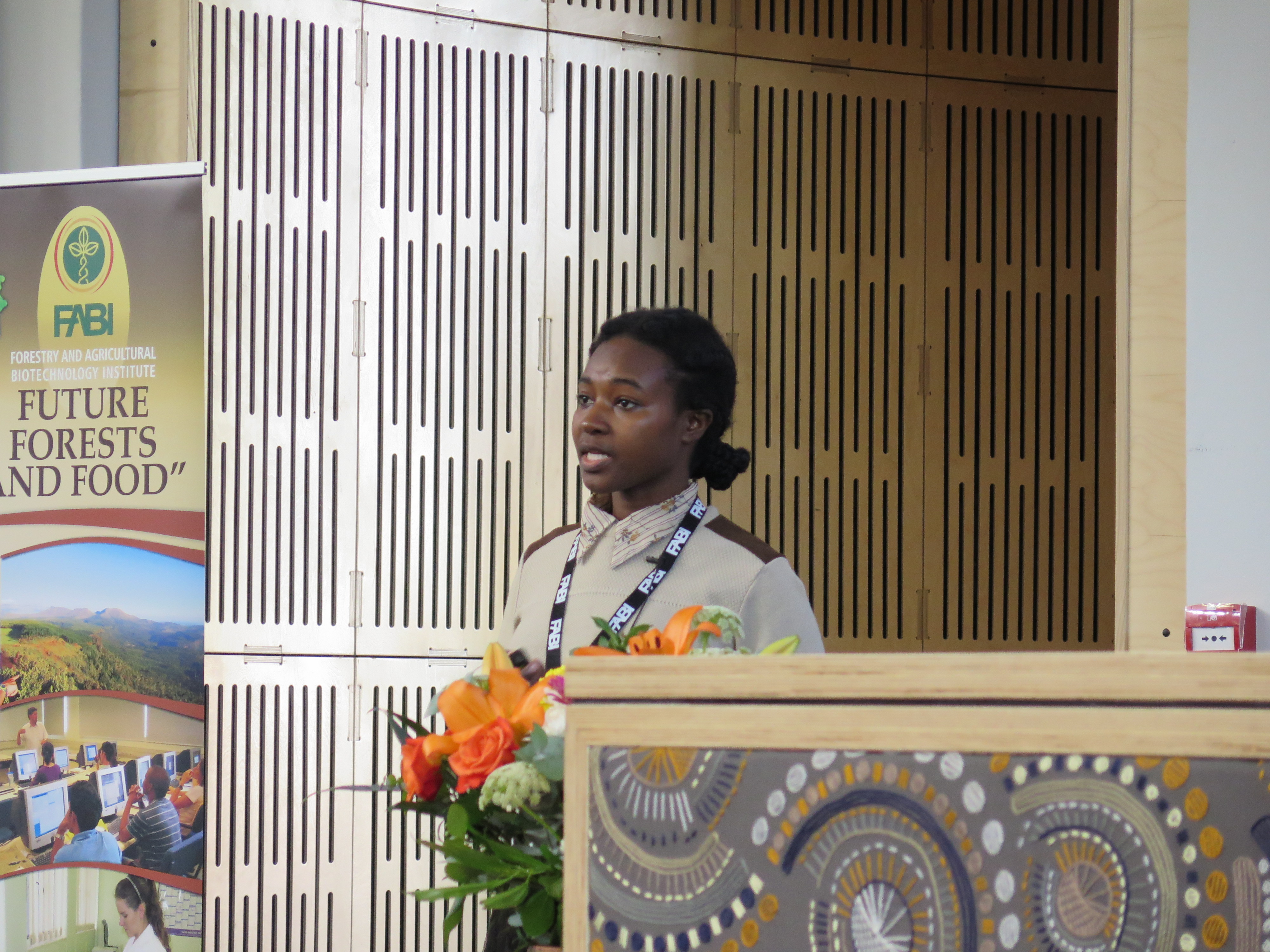 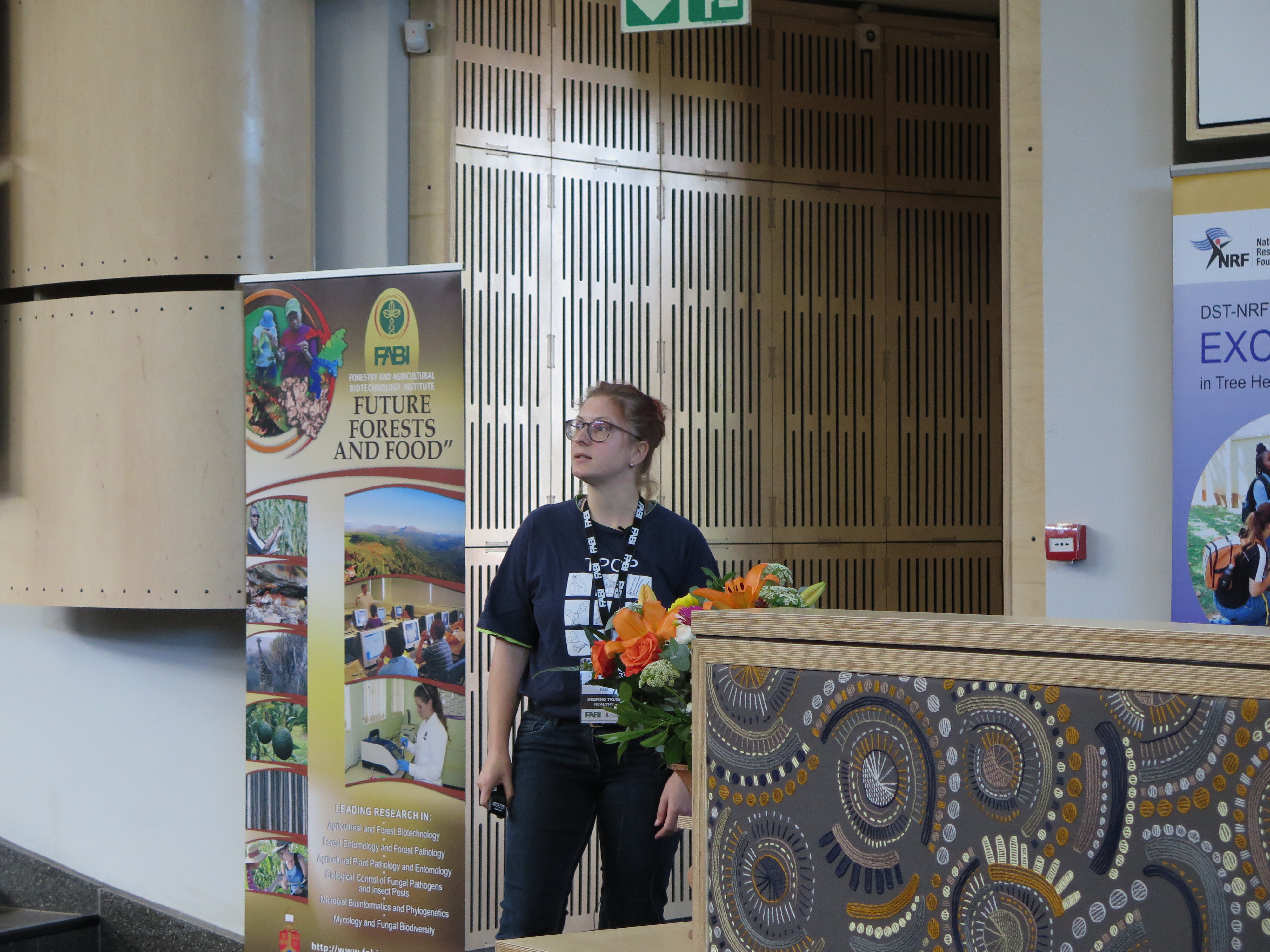 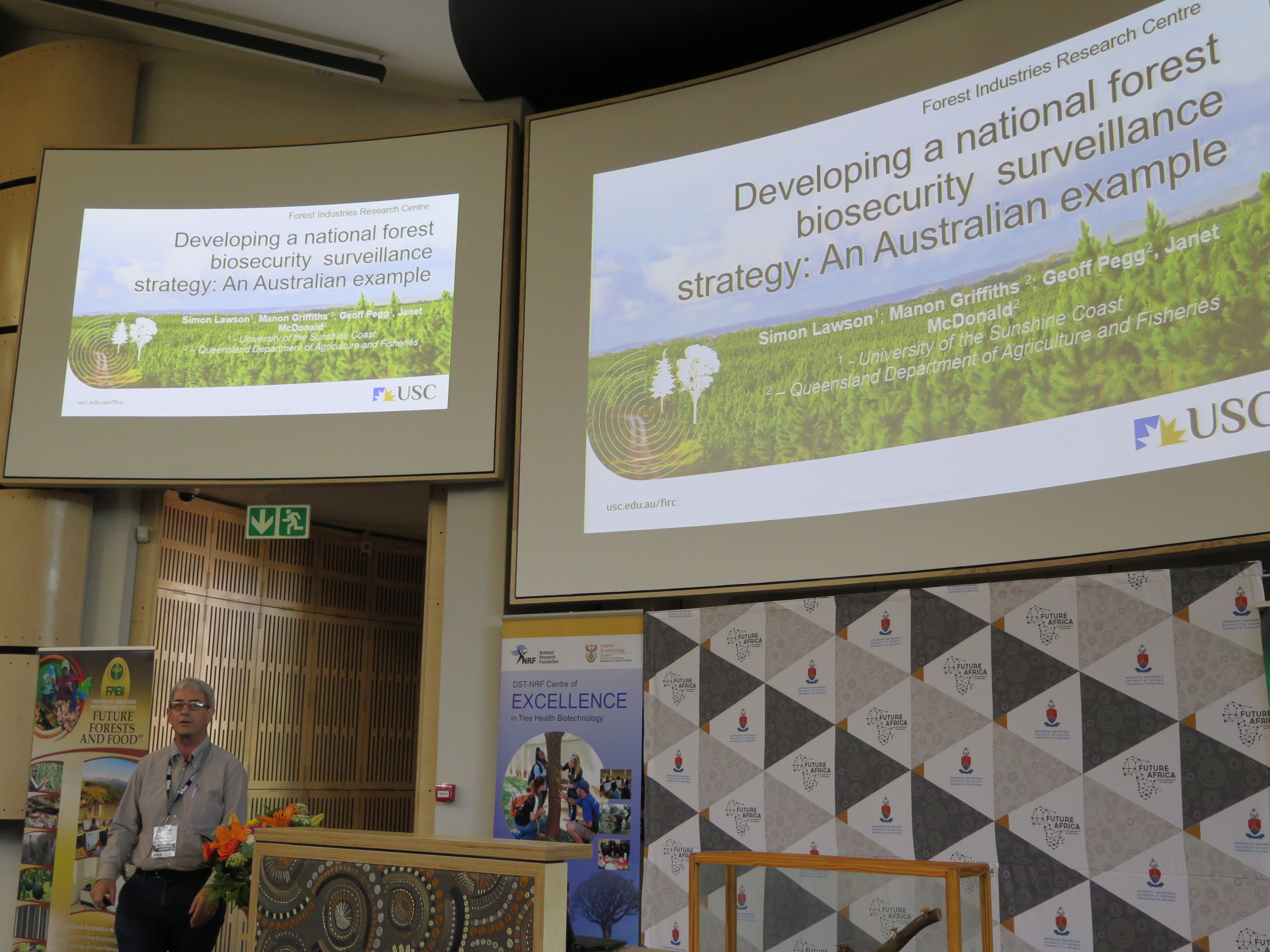 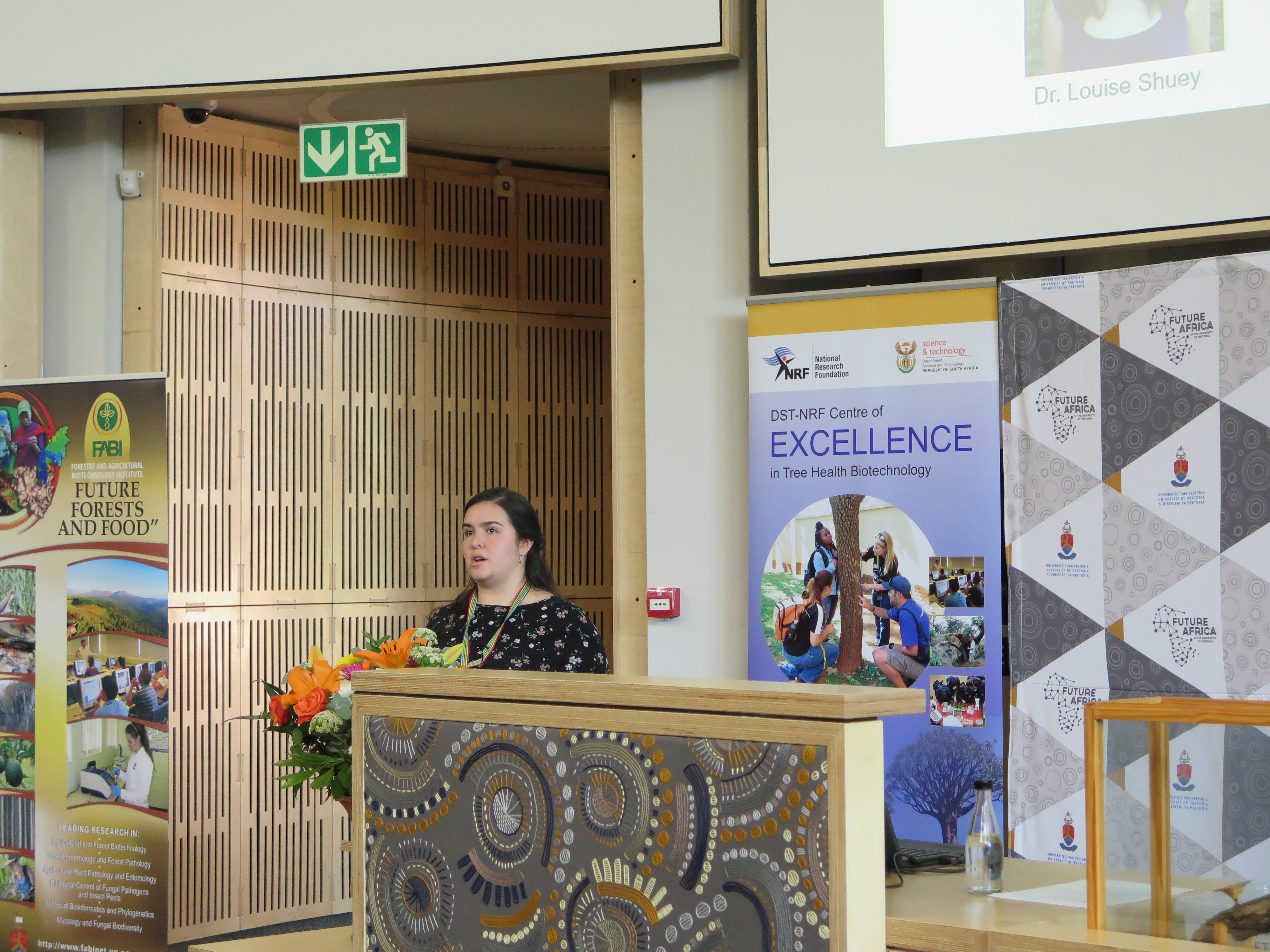 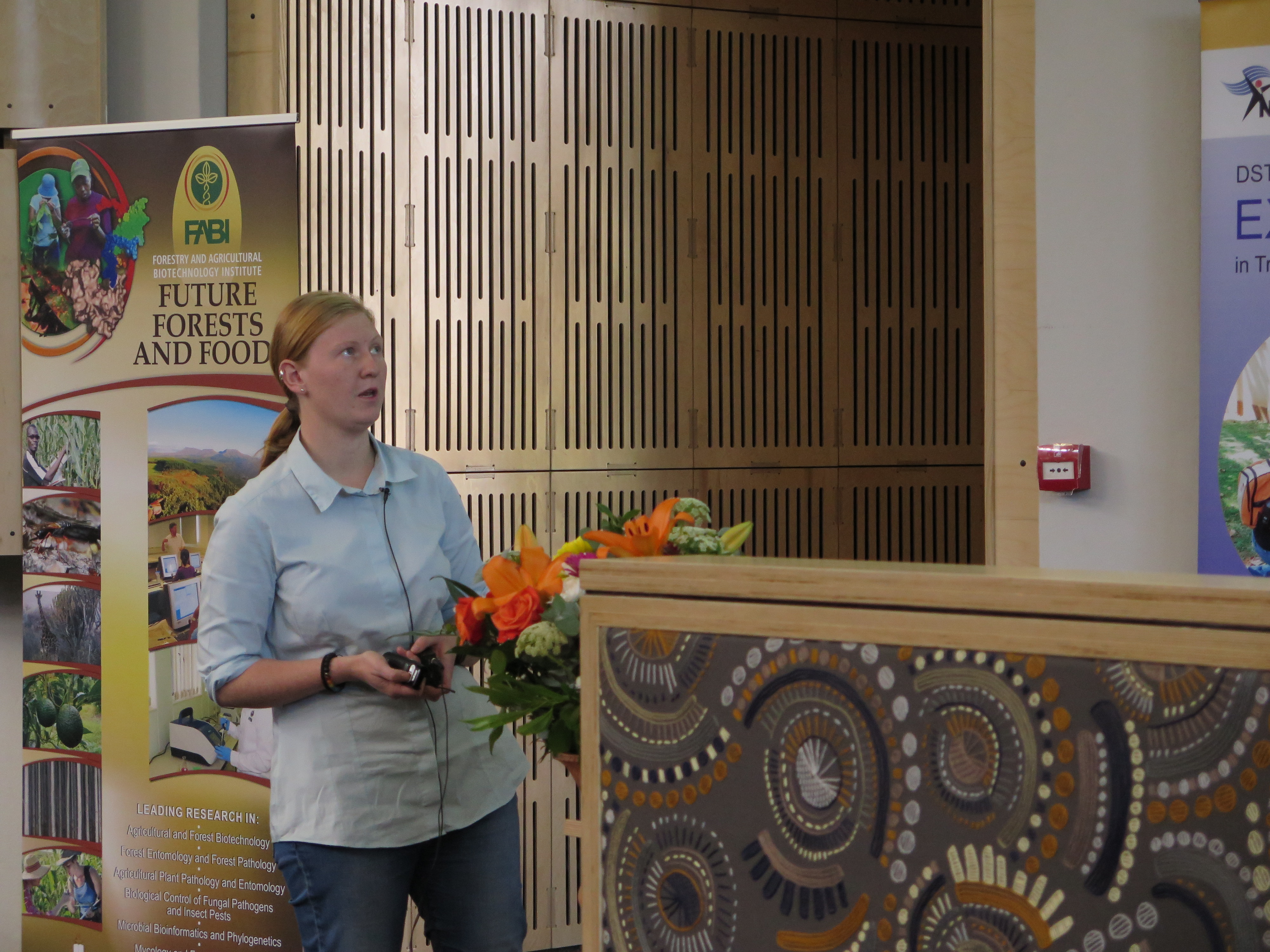 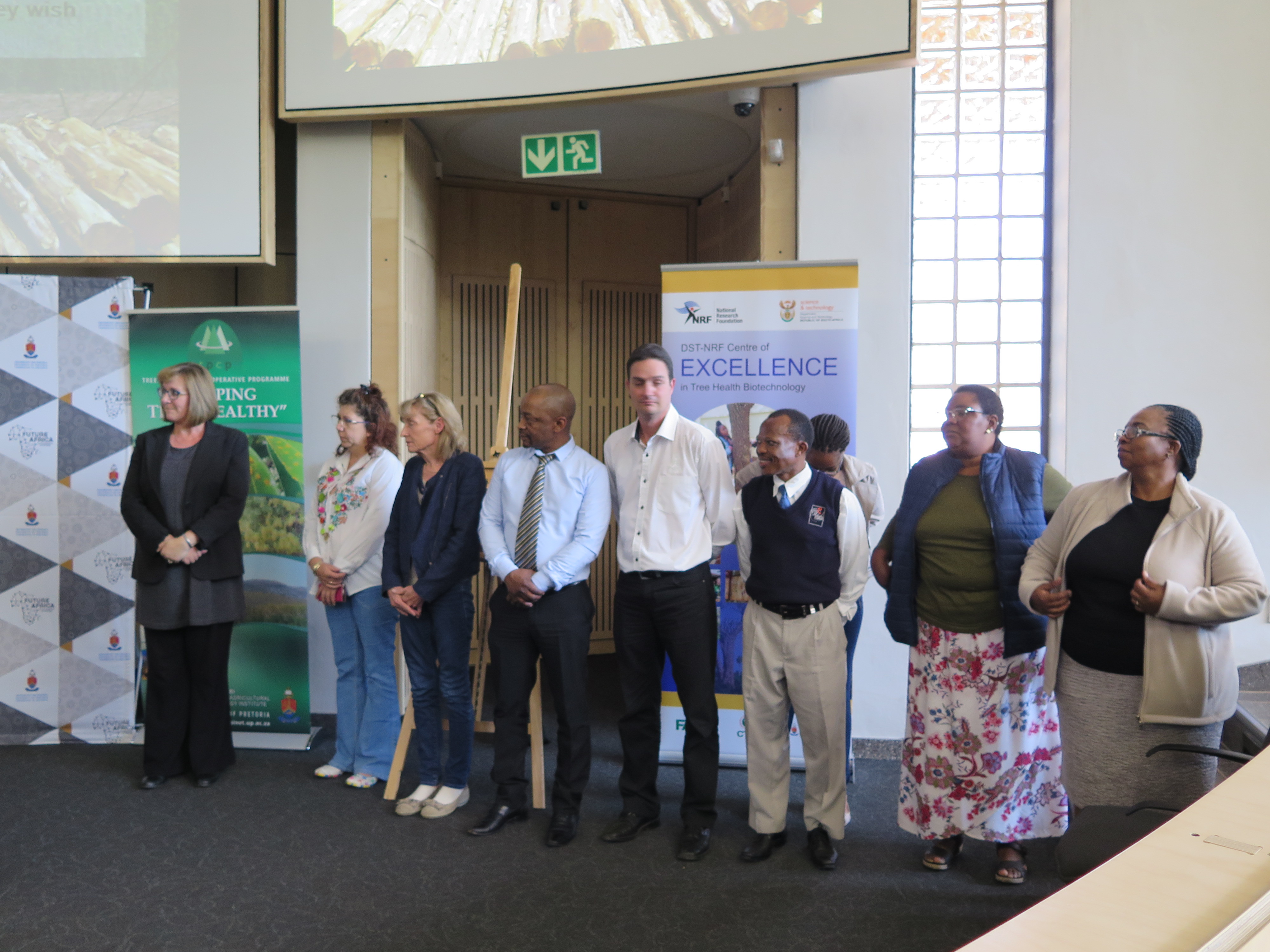 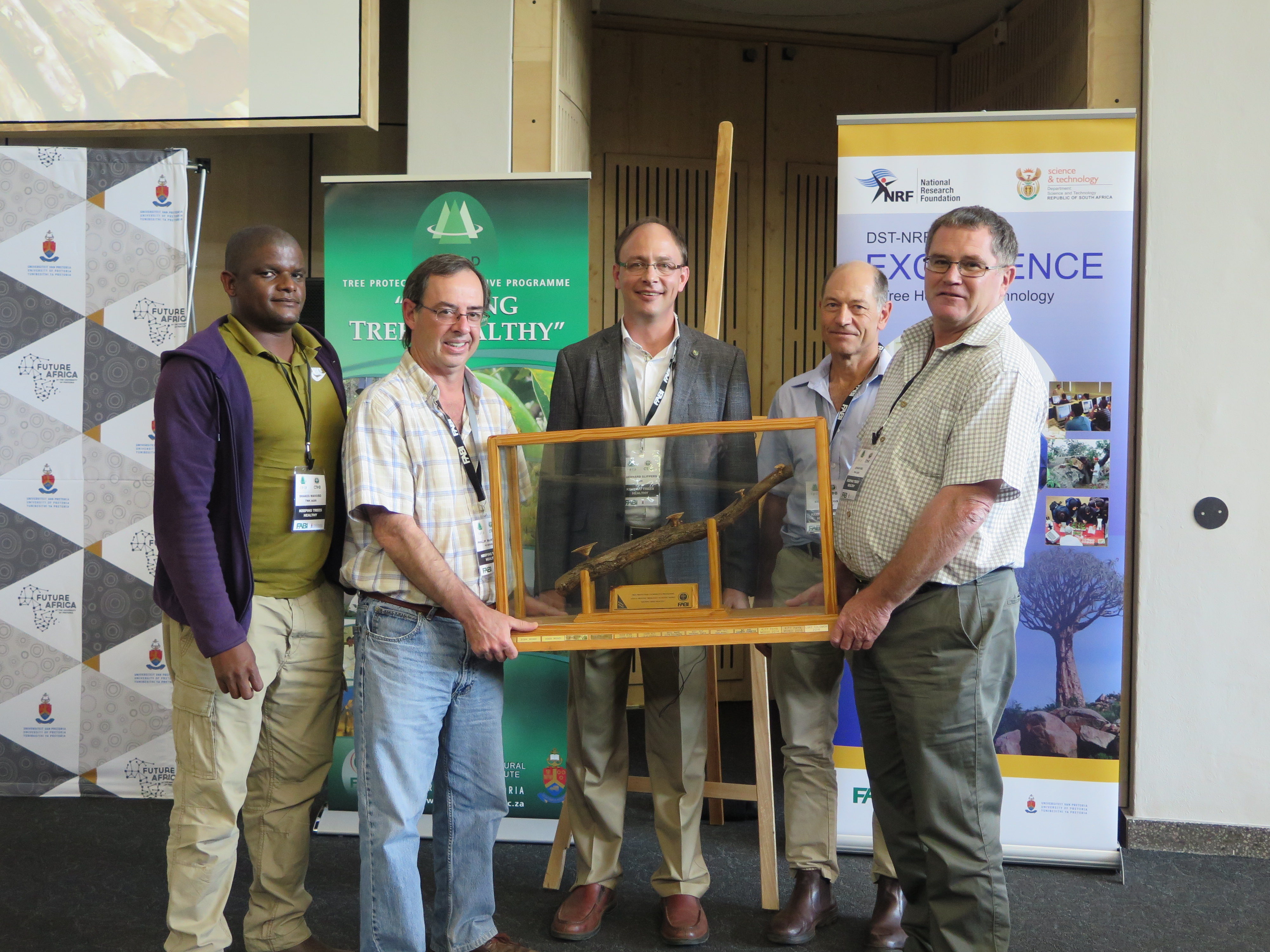 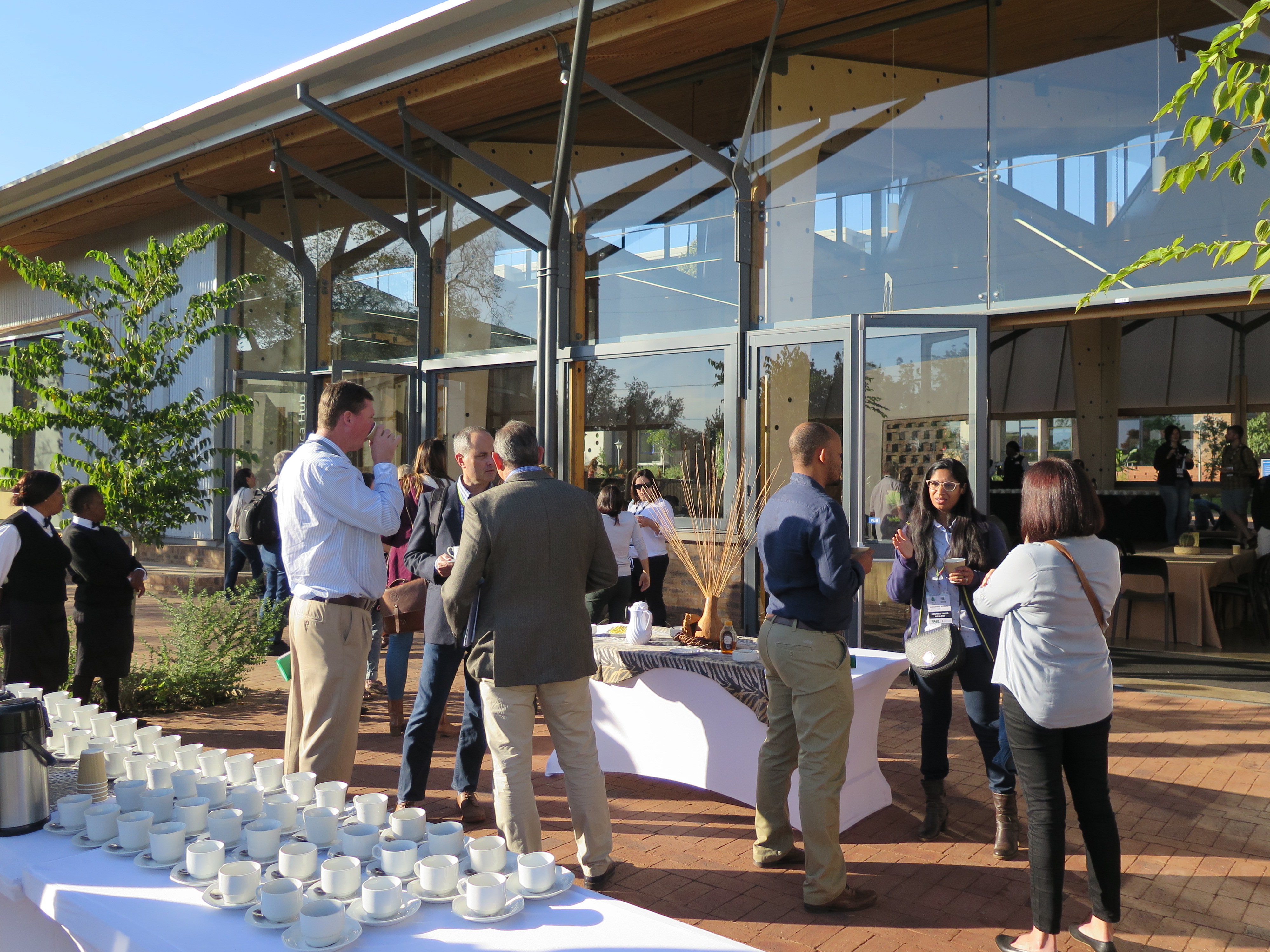 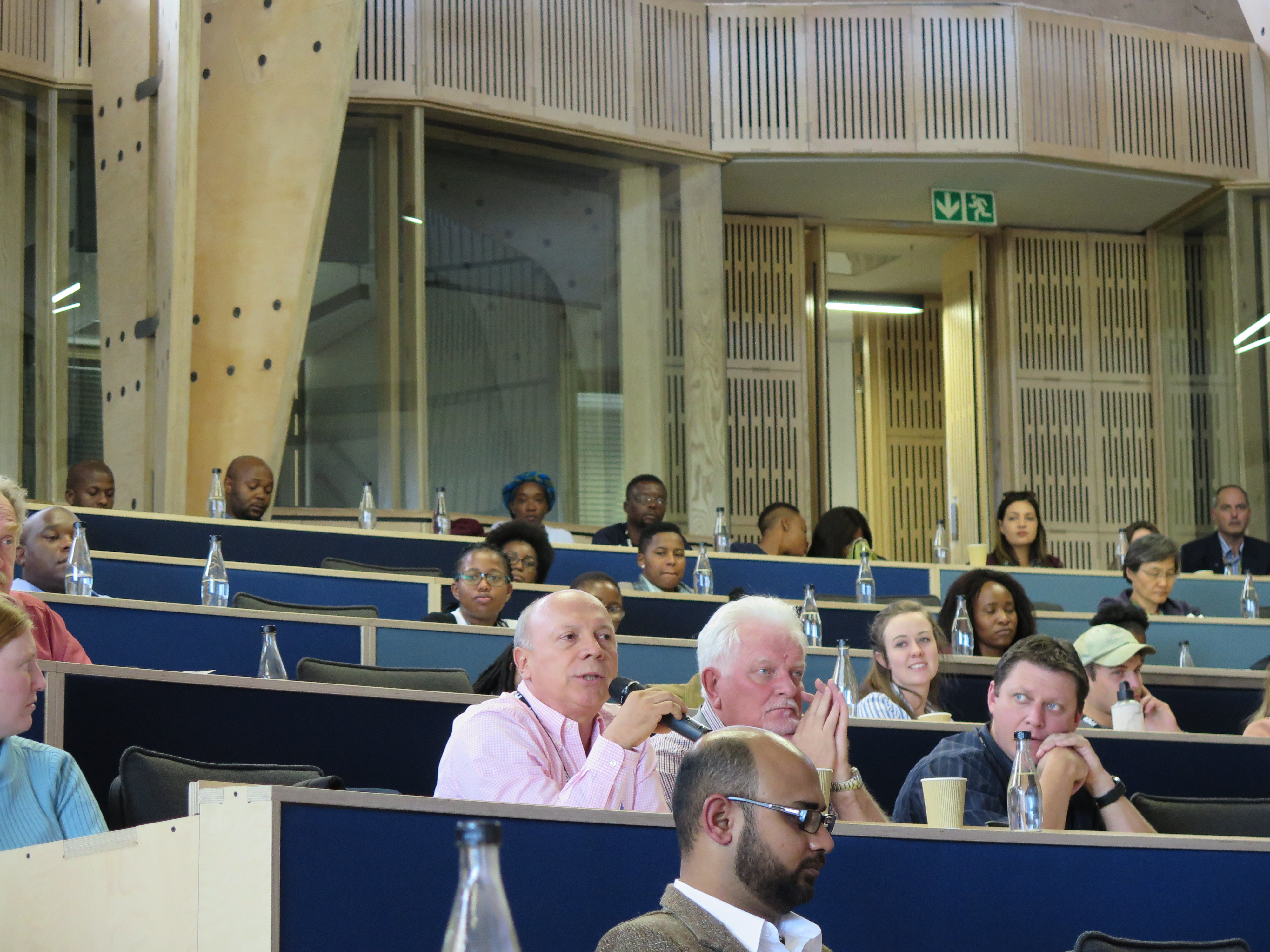 Complacency about forest pests and pathogens could lead to the decimation of native forests worldwide, warned Prof. Mike Wingfield on the last day of the 30th annual meeting of the Tree Protection Co-operative Programme (TPCP) on the Future Africa campus on 15 May. Prof Wingfield compared the battle to manage insect pests and diseases to an “arms race” and warned that “the day we start fighting is the day we start losing” commercial and indigenous forests. He said the South African forestry industry was fortunate in having the support of the TPCP, the biggest tree health programme in the world. As Director and leader in the TPCP for 29 years, Prof. Wingfield said it had been a privilege to see new leaders coming out of the programme.

FABI Director Prof. Bernard Slippers emphasised the need for basic pathology work in the midst of all the technological advances available to tree health practitioners. He attributed the success of the TPCP to its partnership with the forestry industry and collaborations with partners worldwide. Prof. Slippers also presented a trophy to the winning team of a quiz at the dinner the night before, which included members from TWK, PG Bison and NCT, whom he described as a shining example of the “power of collaboration”.

Dr Rene Heim of the University of Florida in the US, in his talk “Assimilation of remote sensing in plant pathology: The case of myrtle rust in Australia”, discussed the possibilities opened by the use of remote sensing technology in monitoring for pests and pathogens in agriculture and plantation forestry. He discussed his experience in using multispectral imaging in monitoring Austropuccinia psidii on a Backhousia citriodora plantation as part of his PhD study.

Dr Janneke Aylward introduced a series of 15-minute speed talks by students and postdoctoral fellows with her presentation “Understanding the biology of Teratosphaeria destructans”, which included research work by PhD student Minette Havenga. The pair were not successful in inducing the sexual state of the pathogen in the lab and they found that there were limited introductions of the pathogen to South Africa. Agil Katumanyane discussed the potential use of entomopathogenic nematodes (EPNs) in the management of white grubs as part of her PhD study, in her presentation, “Exploring the susceptibility of white grubs to entomopathogenic nematodes”. She discussed the white grubs’ resistance mechanisms and asserted that EPNs were better suited than chemical means to managing infestations. PhD candidate Mandy Messal discussed the benefits of understanding fungal community interactions in her talk “Microbiomes and tree health”.

Dr Marc Bouwer highlighted the work of the Applied Chemical Ecology team at FABI on the management of three pests: Coryphodema tristis (the Eucalyptus cossid moth), Euproctis terminalis (the Pine brown tail moth) and Nudaurelia clarki (the Pine emperor moth). The team are studying the use of pheromones to manipulate the behaviour of these insect pests. Research officer at Sappi, Kayla Noeth, expanded on the discussion on the use of pheromone traps in the field in trials for the management of C. tristis. The team at Sappi received mixed results with the male attractant pheromone traps used to disrupt mating in Eucalyptus nitens plantations, she said. Postdoc Dr Gudrun Dittrich-Schroder ended the speed talks with her presentation “CRISPR and the opportunities for pest management”. Because of its precision and efficiency, the CRISPR gene-editing tool could be repurposed to target specific genes in pathogens and pests of interest in forestry, said Dr Dittrich-Schroder.

Dr Simon Lawson of the University of the Sunshine Coast, reflected on Australia’s
“trials and tribulations” in developing a National Forest Biosecurity Surveillance Strategy. Dr Lawson said this strategy was previously “agri-centric” but an incursion of Austropuccinia psidii (myrtle rust) had brought greater awareness of the risks to its forests. He said airports, seaports, container-opening sites, botanic gardens and areas that have high tourist volumes, remained high-risk areas in the introduction of new insect pests and pathogens.

Dr Tanay Bose warned of the dangers of planting the same plants in the same soil for extended periods in his presentation “Replanting syndrome in forestry: What is the evidence?” He warned that a build-up of microbes in the soil and ill-developed root systems were some of the dangers of replanting, and suggested that rotation, as has been practised in agriculture, could counter these (though this poses a challenge in forestry).

Prof. Brett Hurley presented on behalf of Dr Michelle Schroder and spoke about augmentative biological control in a talk titled “Biological control of Gonipterus sp.2”. Unlike classic biological control, augmentative biocontrol involves continuously releasing large volumes of a biological agent and not relying on the insects to reproduce on their own, explained Prof. Hurley. A pilot trial with industry partner, Sappi, in 2018, involved releasing Gonipterus egg capsules parasitised with biological agent Anaphes nitens and measuring infestation levels before and after release. The trial was not successful as a small percentage of A. nitens emerged from the egg capsules, said Prof. Hurley. He cited the loss of humidity in the egg capsules as a possible reason for the low emergence rate.

Prof. Martin Coetzee used the example of Armillaria mellea in the Western Cape to illustrate how molecular tools can be used to track the movement of pathogens over different regions and time, in his talk “Tracking the movement of pathogens: from the local to the global”. The pathogen was found in the Cape’s Company Gardens in 1996 from where it ultimately spread to the Table Mountain Park, where it posed a threat to indigenous flora. Molecular analysis revealed that the pathogen was possibly introduced to the Cape through fruit trees brought on ships by the Dutch East India Trading Company.