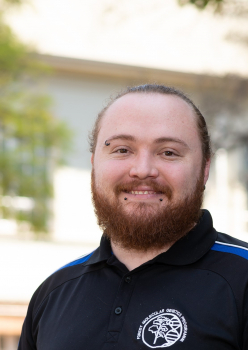 I joined FABI at the start of my BSc (Hons) Biotechnology degree in 2012, after completion of a BSc degree in Human Genetics in 2011. My Honours project was conducted under the supervision of Dr Sanushka Naidoo, in the Eucalyptus Pine Pathogen Interactions (EPPI) group. The aim of my project was to ascertain whether terpenoids play a role in Eucalyptus grandis host responses upon infection with Chrysoporthe austroafricana and whether they could be implicated in different tolerance phenotypes observed between host genotypes. I found large differences in terpenoid concentrations between genotypes prior to infection as well as differences in relative expression of terpene synthase marker genes between genotypes after infection.

During my MSc, I assembled the transcriptome of Pinus patula, the predominant cultivated pine in South Africa, in collaboration with Prof Jill Wegrzyn from the University of Connecticut. As part of my PhD, I assembled the transcriptome for low elevation Pinus tecunumanii. The focus of my PhD was to utilize the resources generated to create a model of defence responses in Pinus species to F. circinatum to identify responses that could underlie the susceptibility of P. patula. To do this, we used a dual RNA-seq approach to compare both host and pathogen responses between resistant low elevation P. tecunumanii and P. patula during F. circinatum challenge. From this analysis we identified phytohormone signalling pathways potentially involved in host defence as well as putative fungal virulence factors. So far during my postdoc, I have assembled transcriptomes for Pinus greggii, Pinus oocarpa and Pinus maximinoi, further increasing the available genomic resources. This data is being used to expand our current comparison to include these three species. This research will contribute to our understanding of defence in conifers and forms the groundwork for future biotechnological applications to enhance defence in these economically and ecologically important forest trees.