Seed Health Symposium was hosted by the University of Pretoria and took place at the conference venue of the Berg en Dal restcamp in the Kruger National Park of South Africa on 14-18 April 2008. This is the first time that this symposium has been held in Africa. There were 65 participants from 28 countries.  There were 22 paper and 14 poster presentations and 2 workshops.

Seed Health Symposium started on 14 April with a welcome reception and delegates were welcomed by traditional dancers complete with spears and drums. This was followed by a traditional barbeque on the terrace overlooking the river and free drinks to get everyone to relax after the long bus trip from Pretoria or Johannesburg.

The next morning Terry Aveling, as symposium organizing committee chair and ISTA Seed Health Committee Chair, officially welcomed all the delegates and Michael Muschick (ISTA Secretary General) opened the symposium.Kosy Dongo (Department of Agriculture, South Africa) gave an opening address which was followed by the session on "Seed treatments and other control measures" and a plenary lecture by Gina Swart (Syngenta, Switzerland). Lunch was followed by a workshop on "Treated seed and seed health testing" during which members of commercial seed companies, chemical companies, research institutes and government representatives and members of the ISTA Seed Health Committee conducted a healthy debate. Many delegates chose to go for a free game drive after close of session whilst others relaxed before the "potjie dinner" - scrumptious stew made in big black pots over an open fire.

Wednesday morning started off with a session on pytosanitary issues and excellent overviews of the Southern African situation were given by the Southern African Seed Organisation (SANSOR) and the Department of Agriculture, South Africa. Phytosanitary issues in Syria and Israel were also addressed. The poster session on seed health testing after lunch drew a great deal of interest as each poster presenter had 5 minutes to introduce their poster and a further 5 minutes for questions. The organizing committee found that this type of interactive address received more attention for the posters than merely allowing an open session for poster viewing. Valerie Cockerell (Scotland) addressed the progress and problems of the ISTA seed method validation programme and then chaired a workshop with Harrie Koenraadt (The Netherlands) on seed sampling for seed health testing. This again resulted in an interactive discussion among the delegates. At the close of day some of the delegates jumped aboard the open game-viewing vehicles armed with big spotlights to try their luck at spotting the Big 5.

Others chose to go for early morning game walks following close behind well armed game rangers. The final day of the symposium was opened by a plenary lecture by Guro Brodal (Norway) and this was followed by various papers on seedborne pathogens/mycoflora and seed health testing techniques. The poster presentations on seedborne mycoflora were made after lunch and this was followed by a summary of the symposium by Reyes Blanco (Spain). Terry Aveling closed the symposium. That evening the gala dinner took place beneath the African sky. Delegates were loaded in game viewing vehicles and taken for a sundowner game viewing experience. Most were incredibly lucky and succeeded in spotting lion, leopard, elephant, rhino and buffalo (the big 5) on this one drive - talk about beginner's luck! Spotlights focused on the green eyes of impala buck in the darkness on the way to the open bush dinner site. The staff of the Kruger Park treated the delegates to a wonderful dinner under the stars and many of the delegates were relieved to see the game rangers patrolling the perimeter of the site with their big guns. A memorable end to the symposium before the long bus trip back to Pretoria and the airport the next morning and farewell to South Africa.

The National Research Foundation, University of Pretoria, Pannar, CSIR, Bayer Cropscience and Syngenta are gratefully acknowledged for funding and sponsorship.

The Seed Health Workshop was hosted by the University of Pretoria and took place in the laboratories of the Department of Plant Sciences.There were 21 participants from 11 countries [Brazil(1), Israel(1), Kenya(1), Nigeria(1), Seychelles(1), South Africa(10), Spain(1), (1), Tanzania(2), United States(1), Zambia(1)].The instructors for the section on fungi were Prof Reyes Blanco from the University of Almeria, Spain (Seed Health Committee member) and Prof Krystyna Tylkowska from the Agricultural University of Poznan, Poland (Seed Health Committee member). Prof Carmen Nieves Mortensen from the University of Copenhagen Denmark and Dr Teresa Goszczynska from the Plant Protection Research Institute, South Africa were responsible for the section on bacteria and Dr Rick Mumford from the Central Science Laboratory, United Kingdom (Seed Health Committee member for the virus section. Mr Moses Lesufi (Department of Agriculture, South Africa jumped in at very short notice to present the section on nematodes. 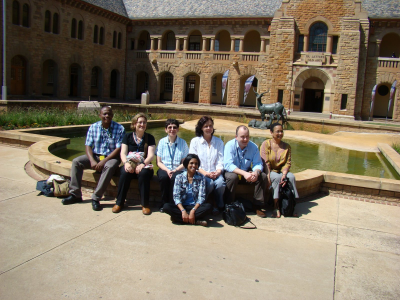 Prof Theresa Aveling (ISTA Seed Health Committee Chair), from the University of Pretoria, opened the workshop and welcomed the delegates. The workshop brought together seed health matter specialists and provided opportunities for South African and other researchers, analysts and students to learn the international seed health testing methods accredited by ISTA. The workshop provided a forum for both theoretical and practical exposure to seed health testing and promoted exchange of ideas and collaboration between the participants and presenters of the workshop.The equivalent of a two day period was dedicated to fungal seed health testing, and one day on each of bacterial, viral and nematode seed health testing. The workshop included theory and hands-on practical work within a laboratory. Lectures were supported by practical demonstrations and focused on the use of standardized ISTA seed health assay procedures. Our appreciation goes to all the lecturers who did an excellent job and provided detailed explanations and information for the workshop manual. The manual was well received by the participants and every participant was exposed to new information that will be very useful in their home countries. The participants made full use of the international lecturers to discuss a wide range of seed health topics and problems and also evaluated the ISTA seed health testing protocols used in the workshop, making suggestions for improvements where possible. Prof Aveling handed over the ISTA certificates of attendance during the closing lunch ceremony.

Special thanks goes to Veloshinie Govender (University of Pretoria) who tirelessly helped with all the practical preparation before and during the workshop and to the postgraduate students, Delphin Kandolo and Renaan Thompson who helped with cleaning and clearing of the laboratory. Thanks are also due to Kassie Kasdorf, Teresa Goszczynska and the Plant Protection Research Institute, Pretoria for providing healthy and infected plant material and to the various seed companies and research institutes in South Africa that provided infected seed samples. Prof Marion Meyer and the Department of Plant Sciences are acknowledged for the use of their laboratories and tea facilities and the National Research Foundation, University of Pretoria and Syngenta SA for funding and sponsorship.