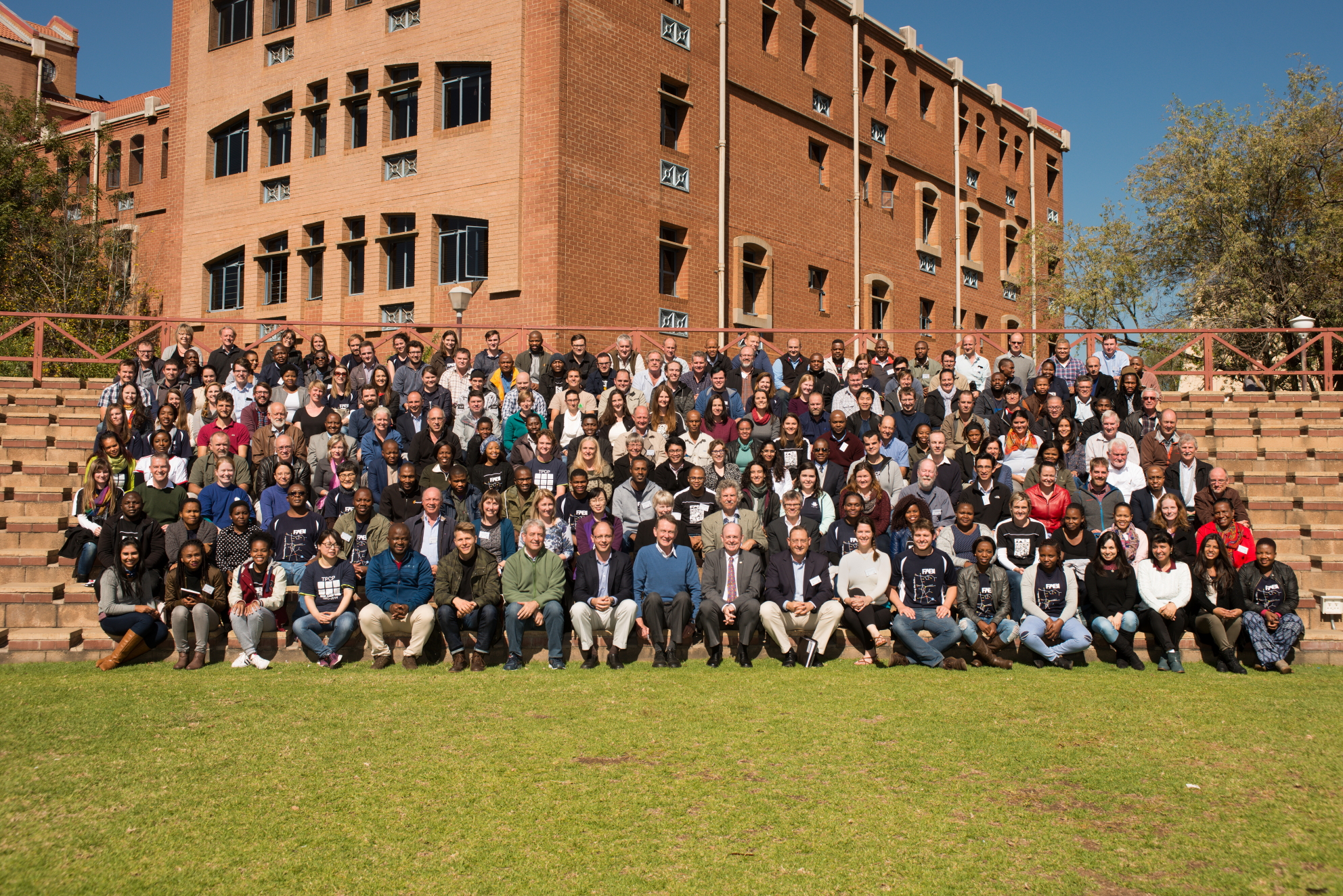 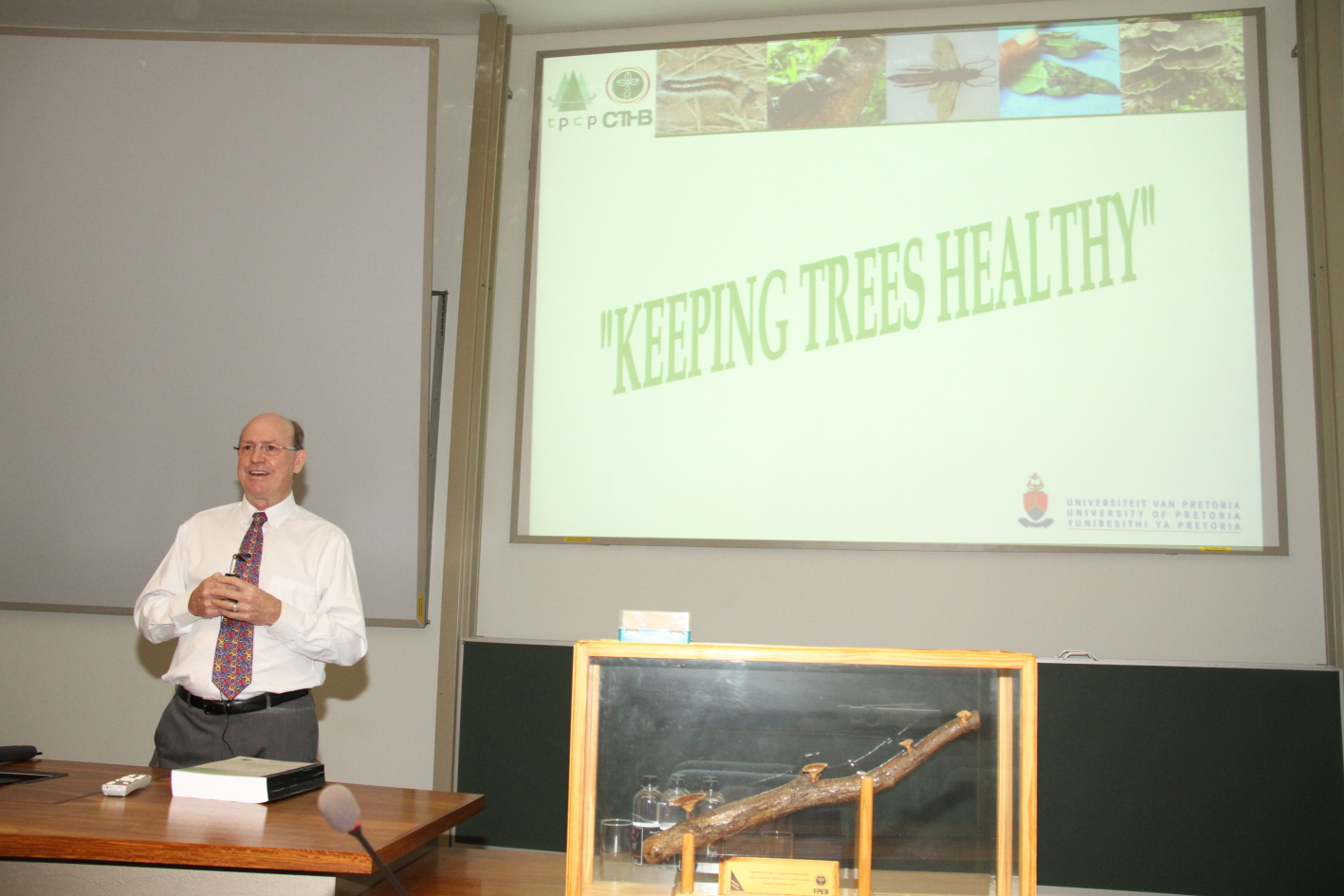 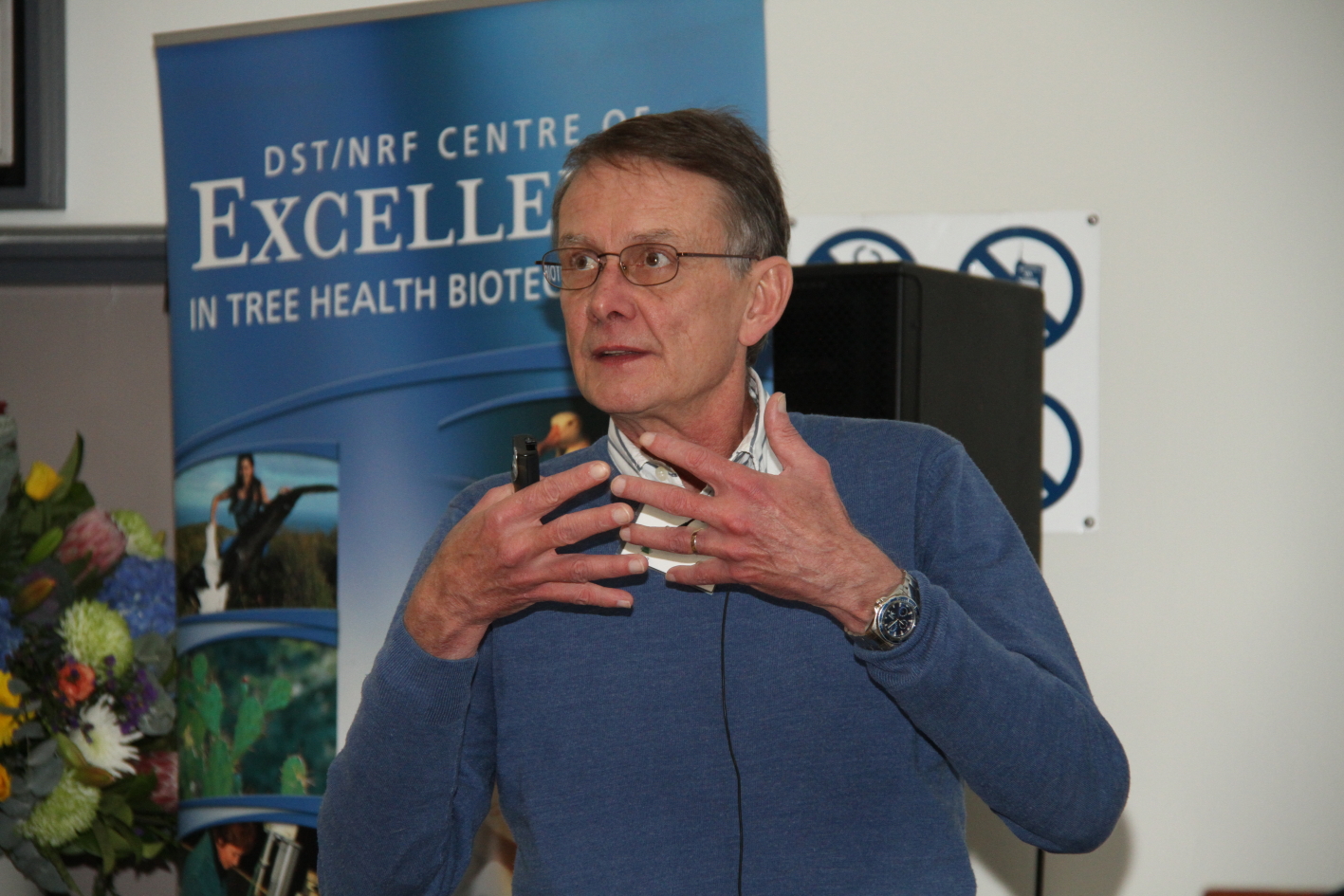 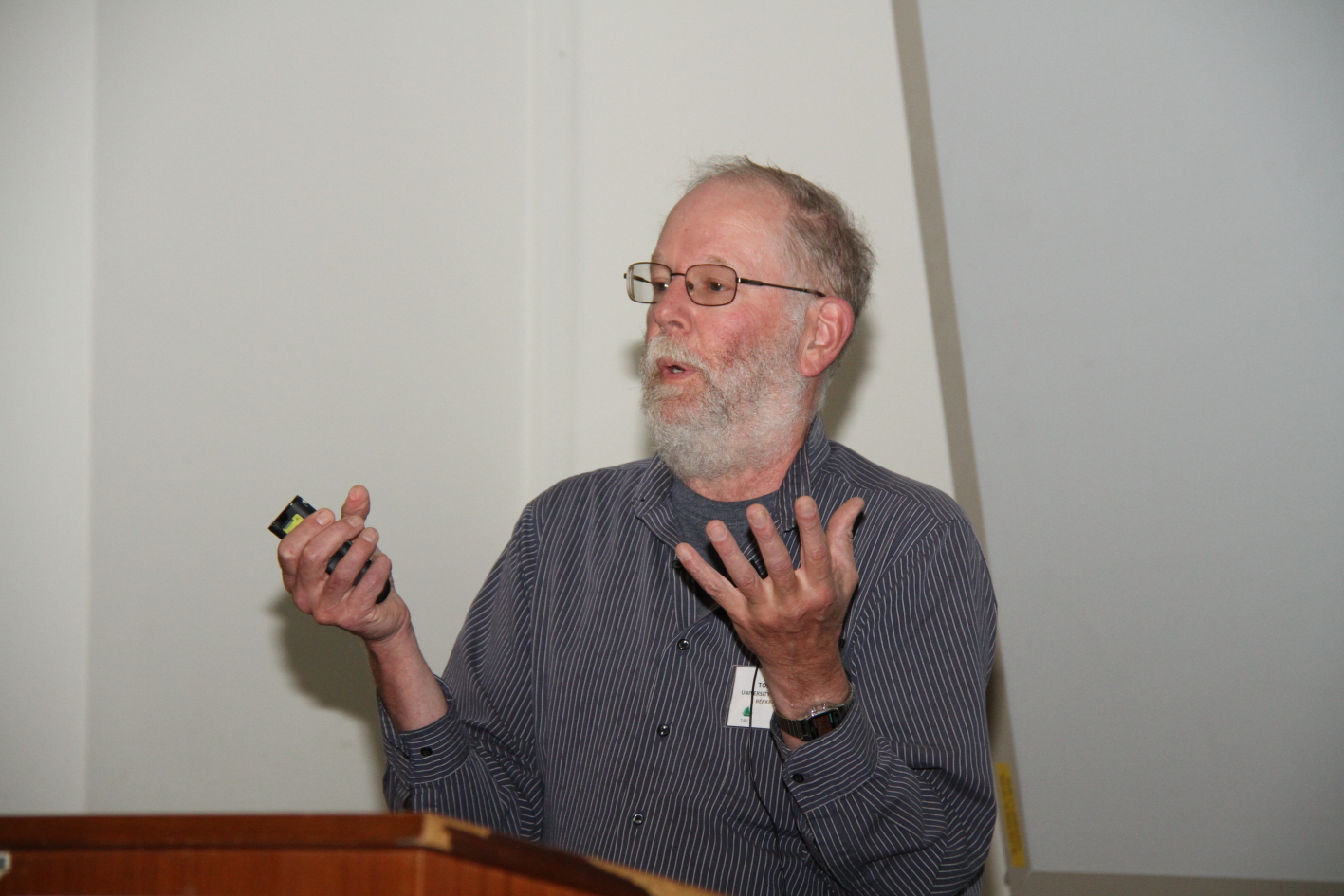 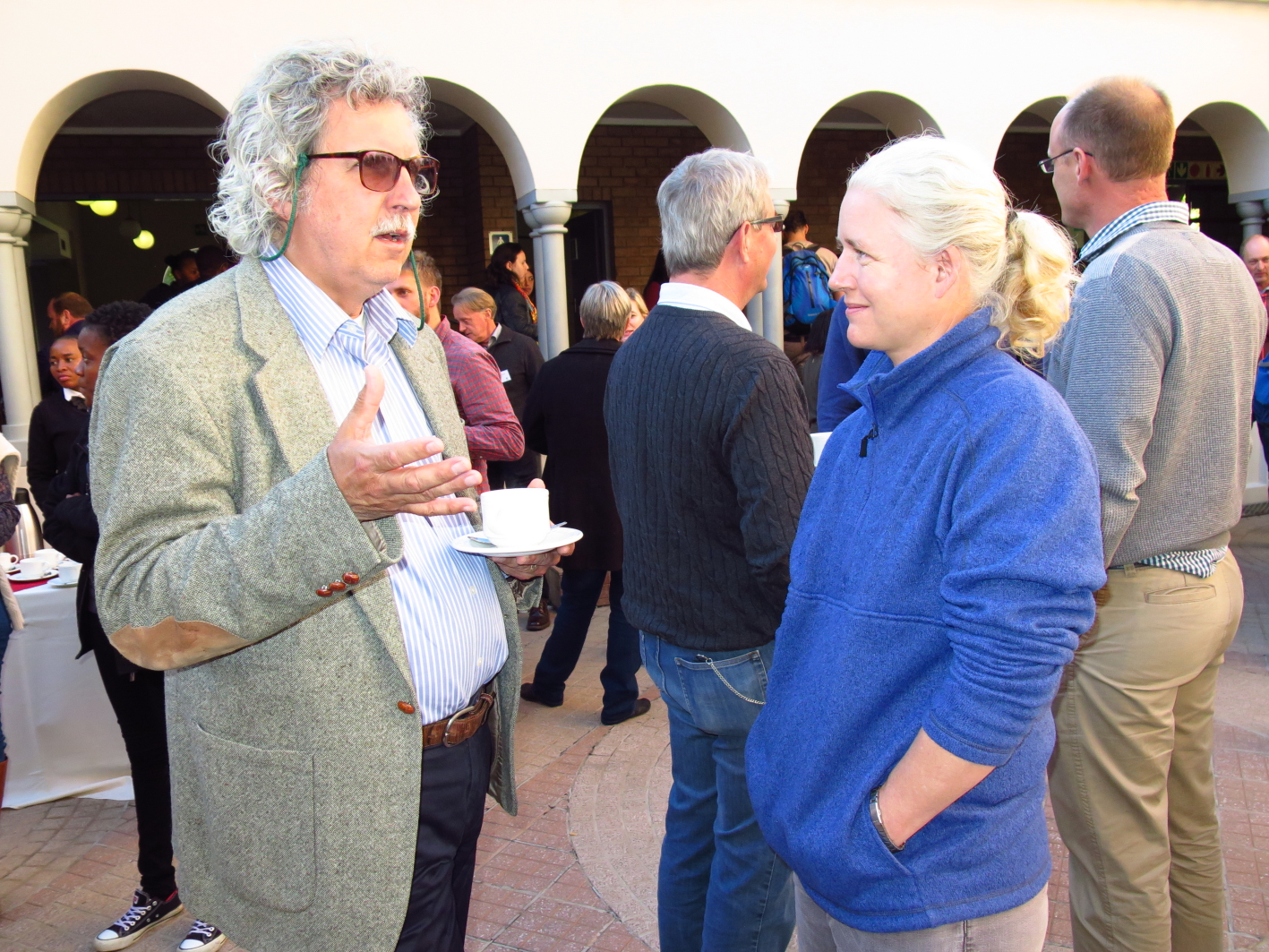 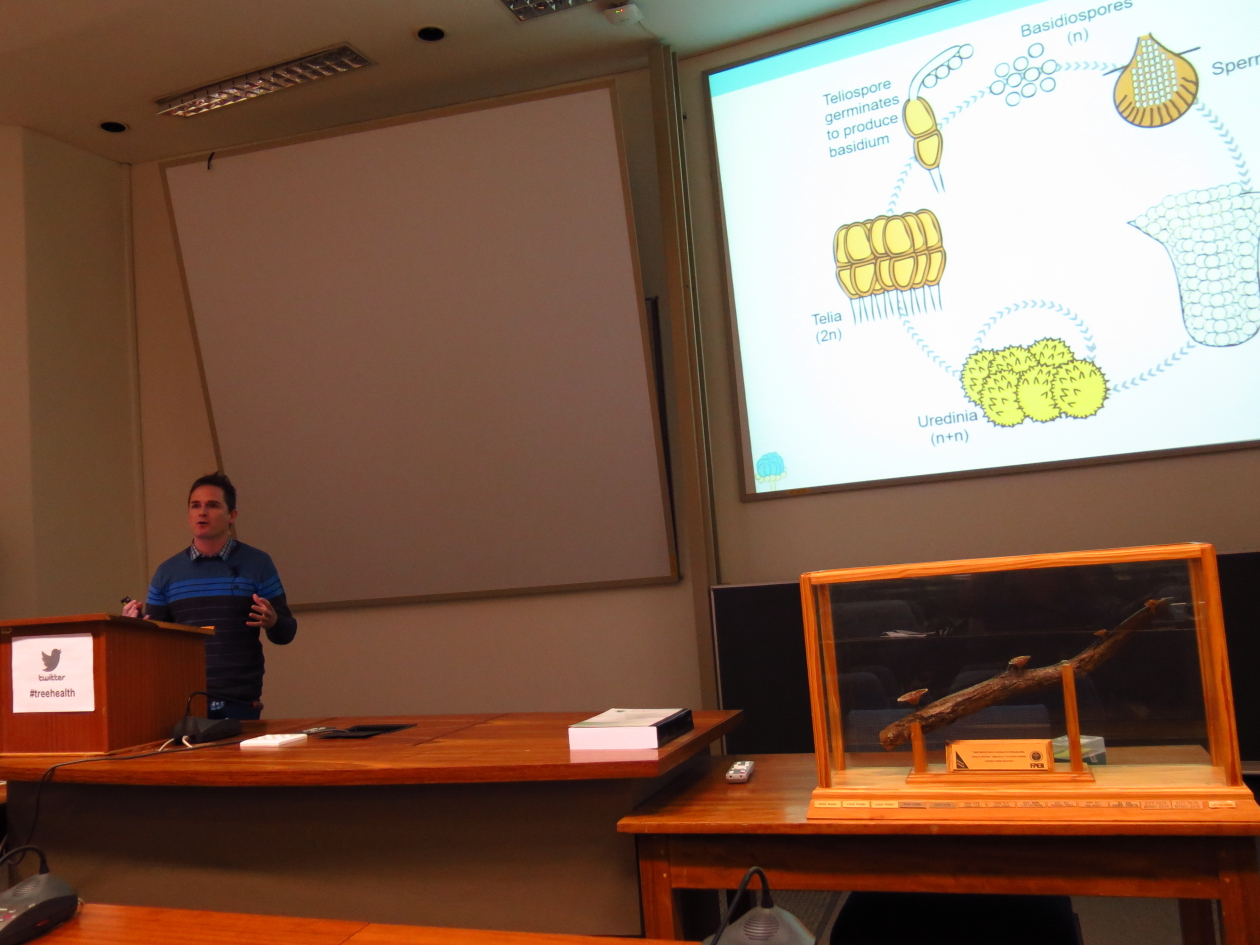 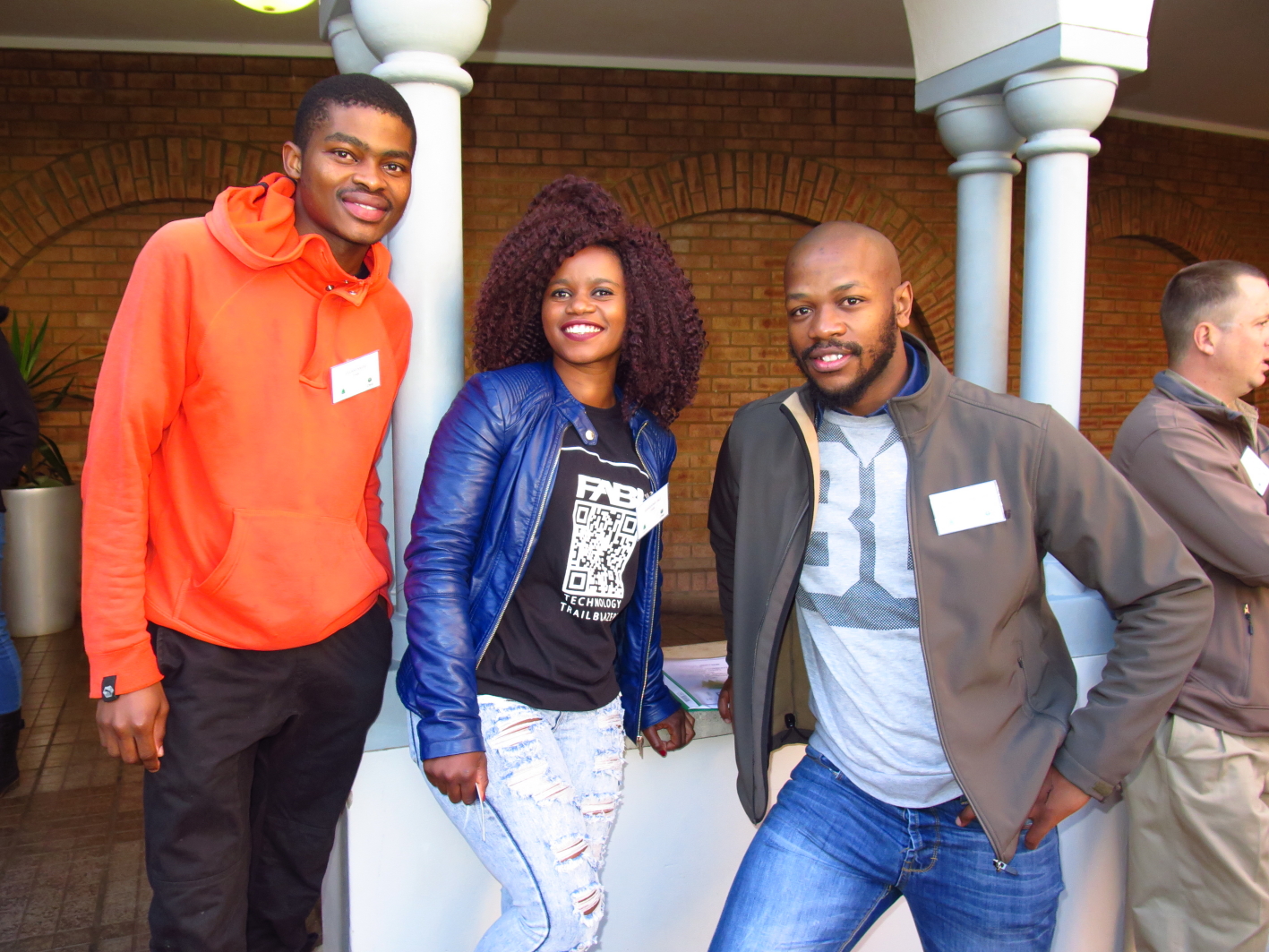 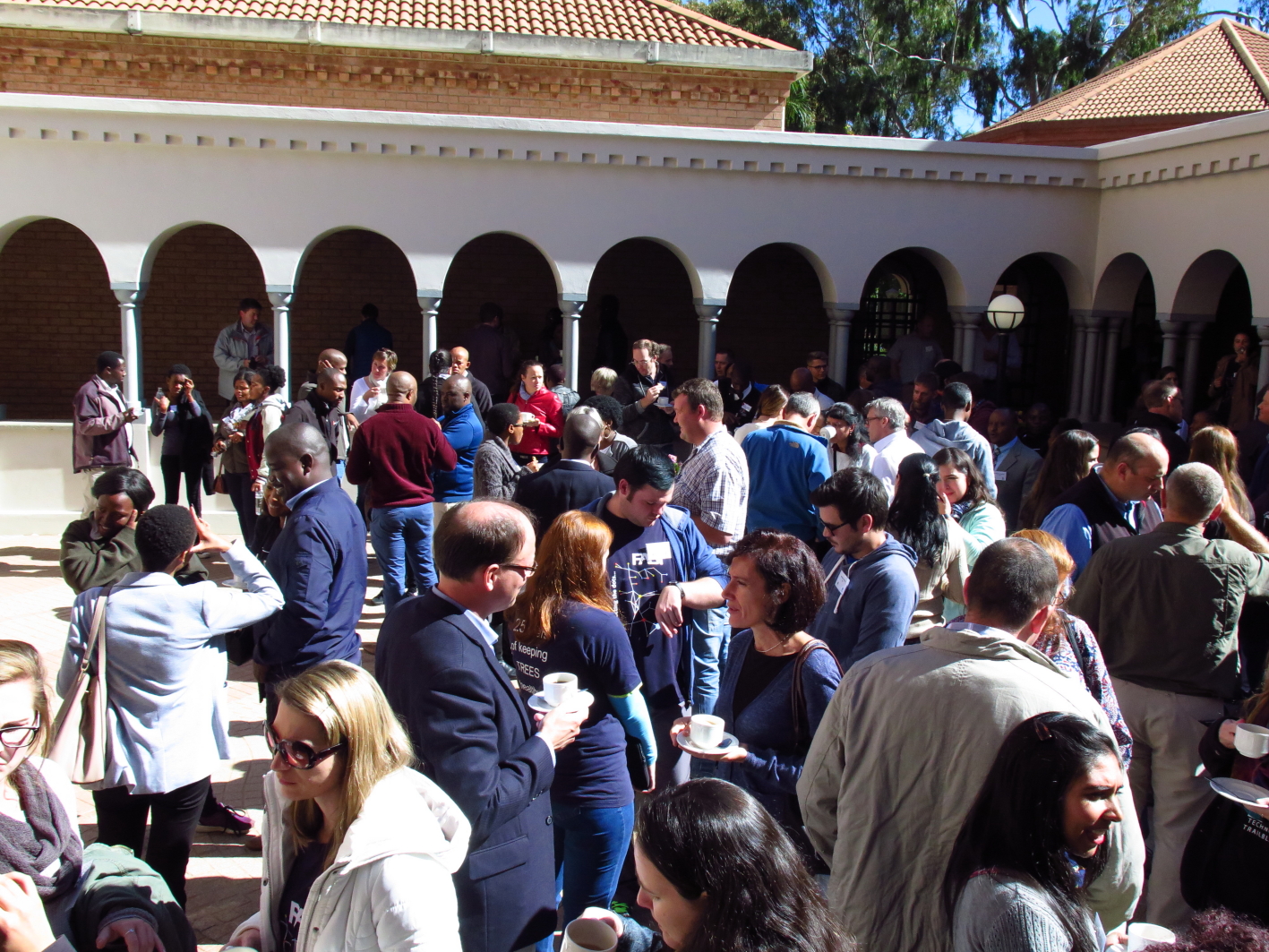 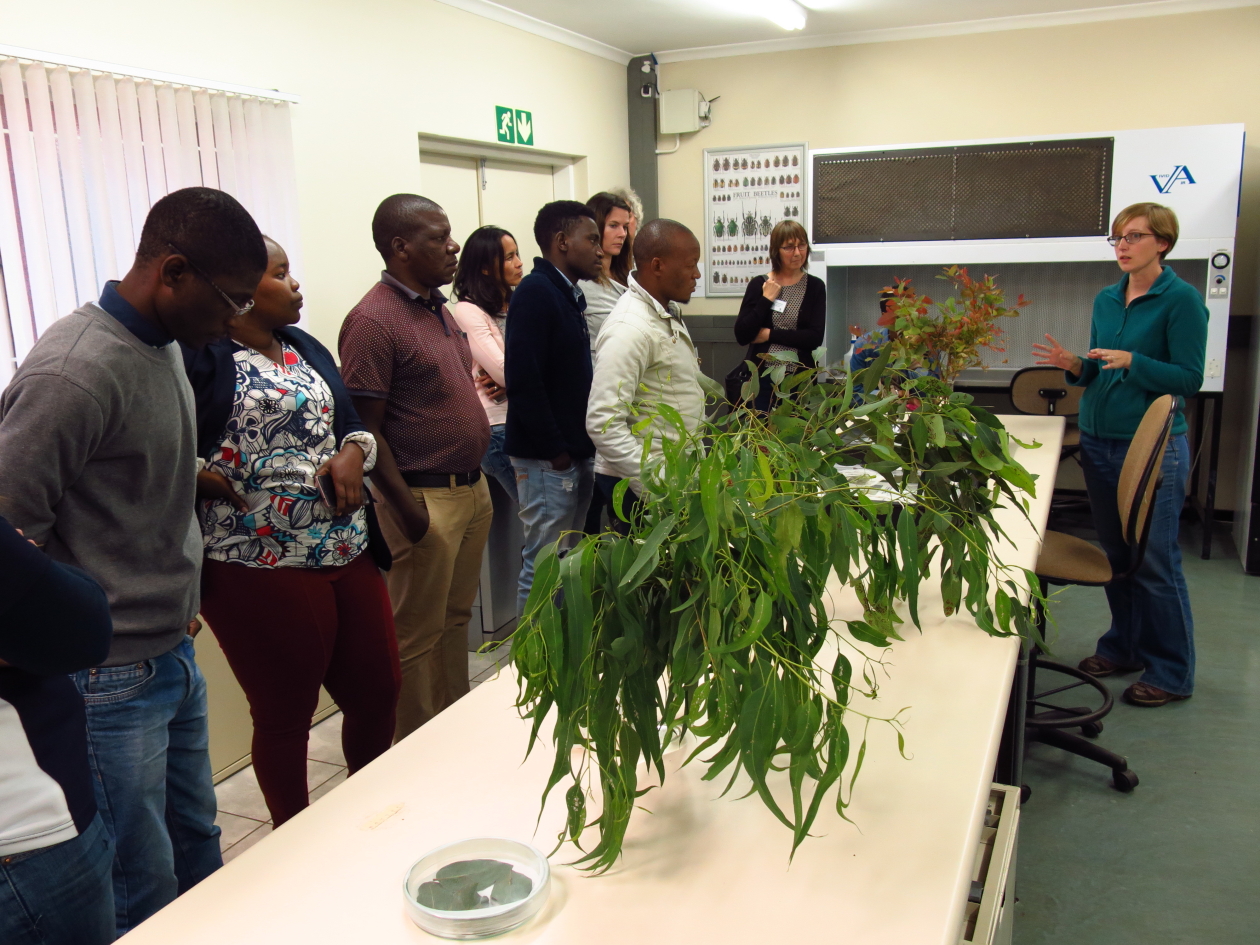 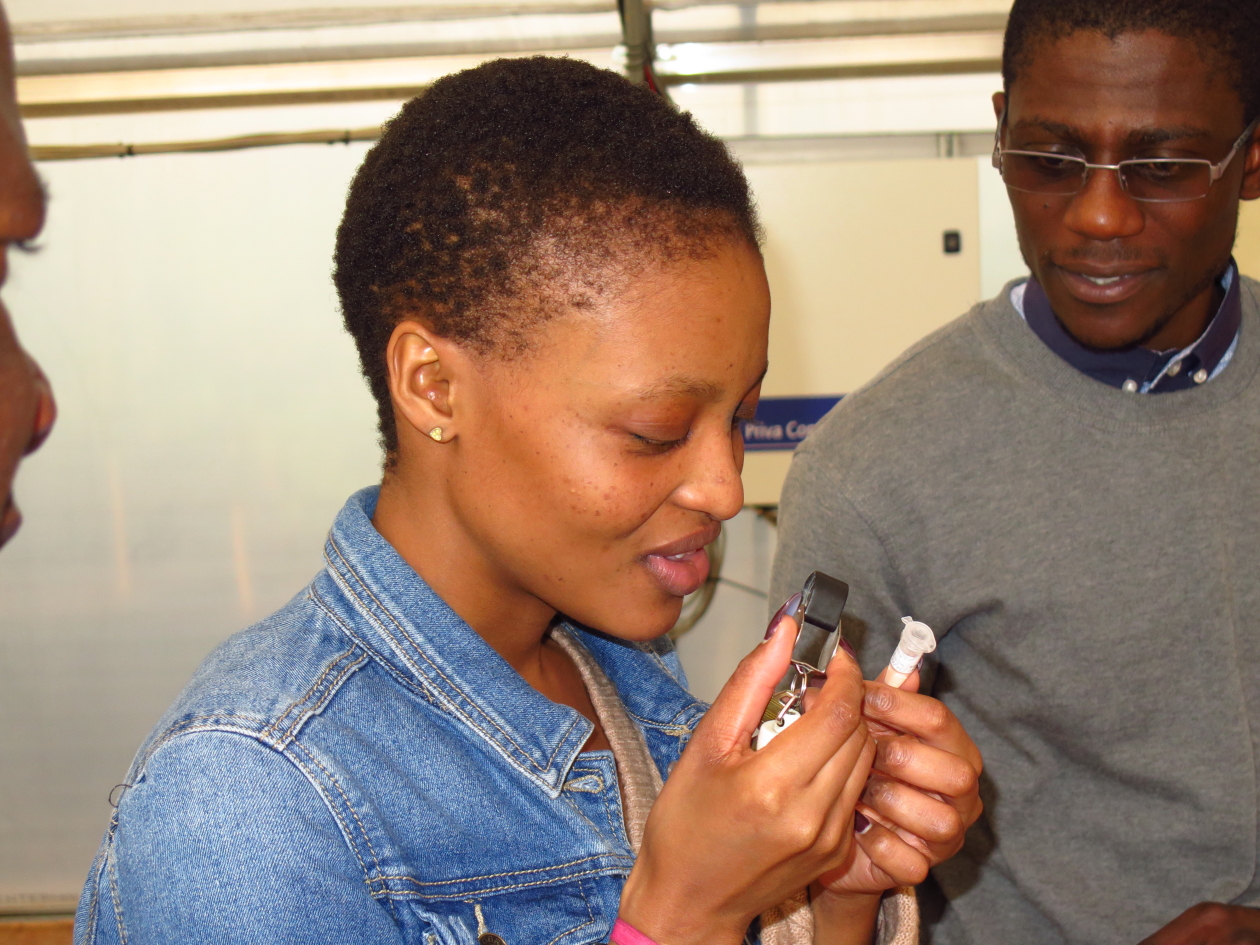 The Tree Protection Co-operative Programme (TPCP) hosted its 28th annual symposium on 16 and 17 May at the University of Pretoria. The meeting, which brought together scientists, researchers and industry stakeholders from around the world, was opened by Prof. Mike Wingfield. By acknowledging that there was no “silver bullet” to address all the issues pertaining to tree health around the world, the speakers addressed various approaches central to the health of trees globally.

Outgoing director of the Institute for Commercial Forestry Research (ICFR),  Prof. Colin Dyer, reflected on developments in the South African forestry industry since the inception of organised research in forestry more than a 100 years ago. Prof. Dyer commended the contributions of research programmes such as the TPCP in forging essential collaborations and opportunities for partnerships worldwide and for the role they have played in the drafting and setting of policies and legislation related to forestry globally.

Dr. Eckehard Brockerhoff of Scion Research in New Zealand gave examples of how the global movement of plants and plant material had an impact on the spread of forest pests and diseases. He said the introduction of 45 Eucalyptus insect pests had decimated New Zealand’s chances of having a viable eucalypt industry, and highlighted the long-term benefits of heat treating wooden materials used to transport cargo between different countries as set out by the International Standards for Phytosanitary Measures.

Dr Trudy Paap gave several reasons why it was important to manage invasions in urban areas. She argued that urban trees are often exotic species vulnerable to new pests and pathogens because of their proximity to airports and harbours, and that management strategies targeting urban trees will reduce the costs of treating or removing these trees after invasions.

Izette Greyling highlighted on the field extension activities in the TPCP and CTHB programmes in 2016, paying attention to some of the pests and diseases encountered, such as Destructans leaf blight of Eucalyptus, which she described as a “big worry”. Manager of the TPCP/CTHB Diagnostic Clinic, Darryl Herron, urged nursery staff, tree breeders and anyone submitting samples to the clinic to provide as much detail as possible. The service is essential for the monitoring and surveillance of pests and diseases. It facilitates not only the early detection of such threats, but also the appropriate response.

Several presentations dealt with the important pine-infesting pest, Sirex noctilio. Prof. Bernard Slippers spoke about ongoing work at FABI on the rearing of the biological control agents of . He said it was important to understand the interaction between the nematodes as biocontrol agents and the different fungal strains emitted by the woodwasps on trees. PhD student Katrin Fitza presented her talk “Diversity in Sirex biological control: The power of international collaborations” on research conducted in countries such as Canada, Australia, Chile, Japan and Spain. MSc student Ludwig Eksteen discussed some patterns he observed in how Sirex noctilio selects trees to lay its eggs and infest. He spoke about how baboon damage left some Eucalyptus species vulnerable to Sirex infestations. Professors Diana Six of the University of Montana and Kamal Gandhi of the University of Georgia, discussed lessons from their work in the pine forests infested by bark beetles in North America. In “Are the trees telling us something: Using genetics, chemistry and tree ring analysis to detect climate adaptation and resistance to insects” Prof. Six spoke about trees that survived a mountain pine beetle outbreak unscathed. She hypothesised some surviving trees were “pre-adapted” to warmer, drier conditions and that they exhibited different chemical profiles that seemed to repel the bark beetles. Prof. Gandhi discussed the interactions between abiotic and biotic factors affecting health of southern US Pines.

In terms of insect pests of Eucalyptus, Dr. Brett Hurley discussed the history of the Leptocybe invasa gall wasp in SA, and developments in its control and management strategies. He described the presence of Quadrastichus mendeli, a second natural enemy in addition to the biocontrol agent Selitrichodes neseri, as a positive development in the management of the pest. Dr Michelle Schroder described the complications in attempts to improve biological control efforts of the Gonipterus species complex. Dr Simon Lawson of the University of the Sunshine Coast in Australia highlighted the work of the Biological Control of Eucalyptus Pests (BiCEP) – of which the TPCP is a partner – on the “big five” eucalyptus pests globally. Dr Gudrun Dittrich-Schroder introduced to the audience a new tool developed at FABI to help field scientists and researchers to identify new insect pests. Called the Forest Insect Mitochondrial Barcode Database, it allows researchers to upload a sequence of the unknown species to the database, which will then link then positively identify it or link it to its closest relative.

Dr Jeremy Allison of the Canadian Forest Service spoke about the contributions of chemical ecology to the development of management tools of insect pests. He has been collaborating with several FABIans, including Prof Bernard Slippers, and Drs Marc Bouwer and Almuth Hammerbacher, for some years now with regards to control of pests like Sirex and the cossid moth.

In terms of fungi, Prof. Tom Bruns of the University of California Berkeley, focused on the benefincial role of symbiotic fungi in promoting tree growth and maintaining forest health in his lecture “Mycorrhizae matter”. He discussed the important role of ectomycorrhizae in degrading litter and nutrient exchange, especially for tree species growing in poor soils.

Several presentations dealt with fungal diseases of trees. Prof. Paolo Gonthier of the University of Torino spoke about the devastation of Pinus pinea in Italy brought on by a fungal pathogen of North American origin, Heterobasidion irregularae, decades after its introduction through untreated timber during World War II. In her presentation “Delving deep into Dothistroma needle blight” Prof. Rosie Bradshaw of Massey University in New Zealand spoke about the intensity with which the disease has spread globally and ongoing work in seeking to understand how it causes disease.

In her “Update on Fusarium circinatum research at FABI”, Prof. Emma Steenkamp shed light on some of exciting research on this pine pathogen by students in the Institute. These studies include investigating the role of mating peptide pheromone receptors in the sexual processes of the pathogen and understanding the disease processes – all of which are important targets for the development of control strategies.

Dr. Stuart Fraser explained the biology and epidemiology of Uromycladium acaciae, the causal agent of a rust disease on Acacia mearnsii in the Mpumalanga and KwaZulu-Natal provinces. Though it has been reported in SA since the 1980s, it wasn’t until 2013 that significant damage was observed. Dr. Fraser argued that there were likely two species of the rust fungus in the country. In another presentation titled “Rust never sleeps: Rust research at FABI”, Dr Alistair McTaggart shed light on the complicated life cycle of Austropuccinia psidii. He warned that there was little chance of the rust fungus “disappearing” even with the persistence of extreme weather conditions because it could survive in its more resilient spores stages of its lifecycle.

Dr. Irene Barnes tracked the occurrence and movement of diseases associated with the fungal species Ceratocystis around the world in her presentation “The rise of Ceratocystis: Threats to global forests and forestry”. She recounted the devastation that the pathogens have caused in countries such as Oman, Pakistan, Brazil and Hawaii as well as the dangers they pose for native tree species in those countries, but also potentially to commercial forests in South Africa.

In “What’s in a name? The importance of accurate taxonomy in forest pathology” Prof. Wilhelm de Beer dissected how good taxonomy underpinned the study of various fields central to tree health such as genetics, population biology and the development of biological control agents. With only a “fraction” of fungal species identified and described, taxonomy remained an essential key in ensuring faster, more accurate diagnosis of threats to the health of trees, assessing the risks to relevant tree species, and crafting a response appropriate to the threats, argued Prof. de Beer.

Apart from formal presentations, an important aim of the symposium is to provide a platform and opportunities for discussions between representatives of the forestry industry, funding agencies, researchers and students. This is to ensure that the varying priorities of these stakeholders are aligned, and that the research outcomes meet the expectations of all parties. From the buzz at coffee breaks, lunches and dinners it was evident that the symposium fulfilled its purpose!