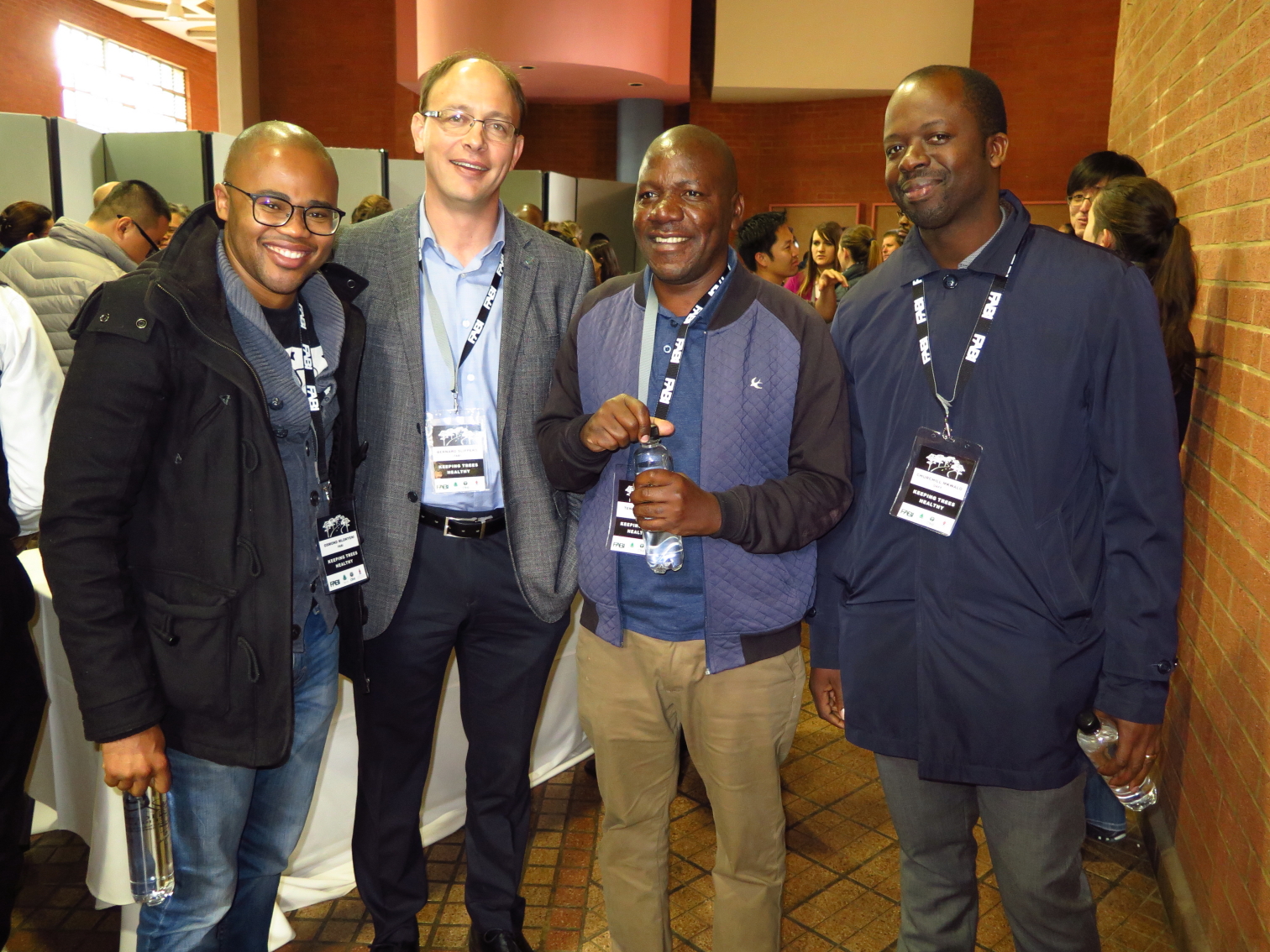 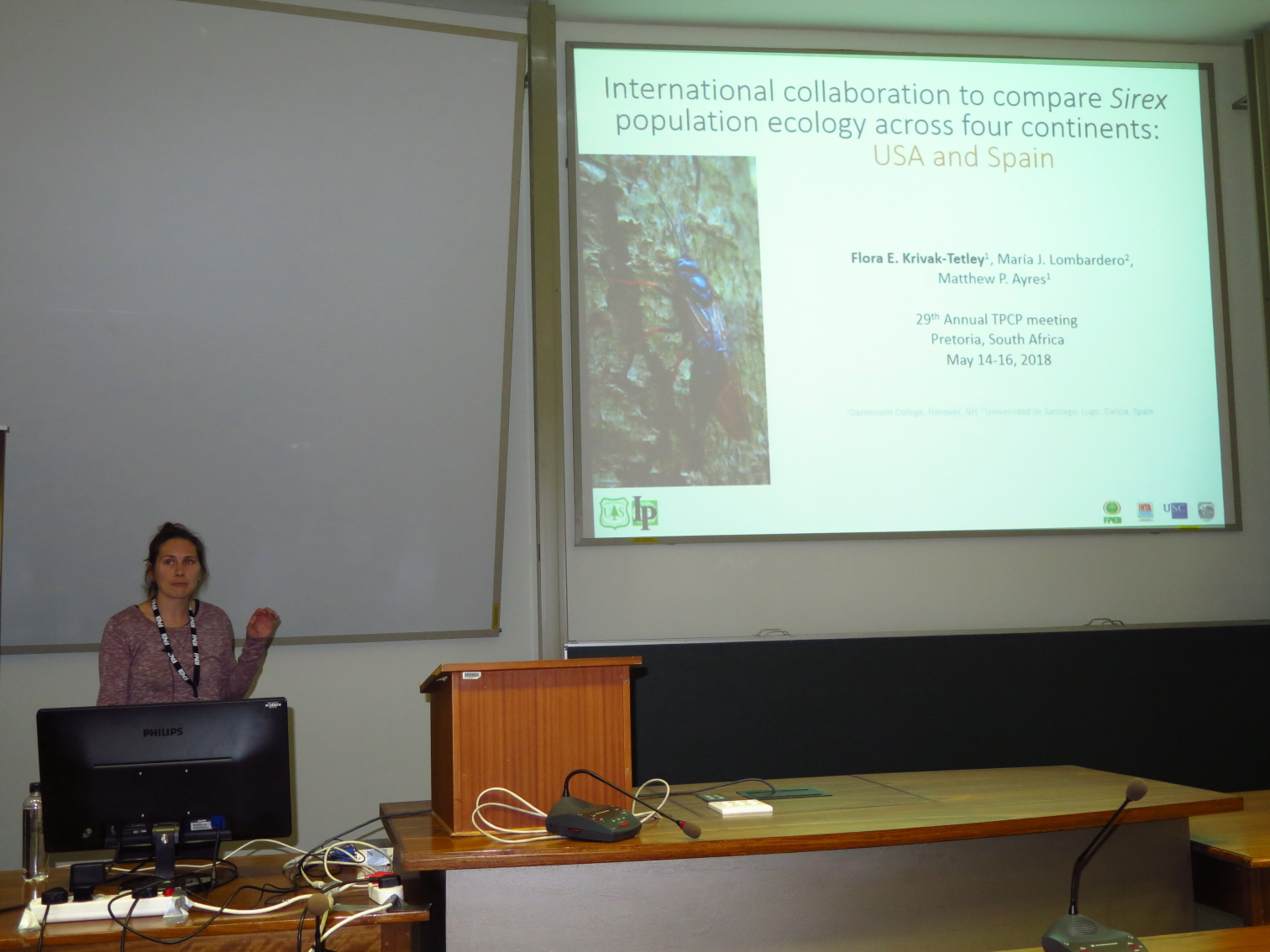 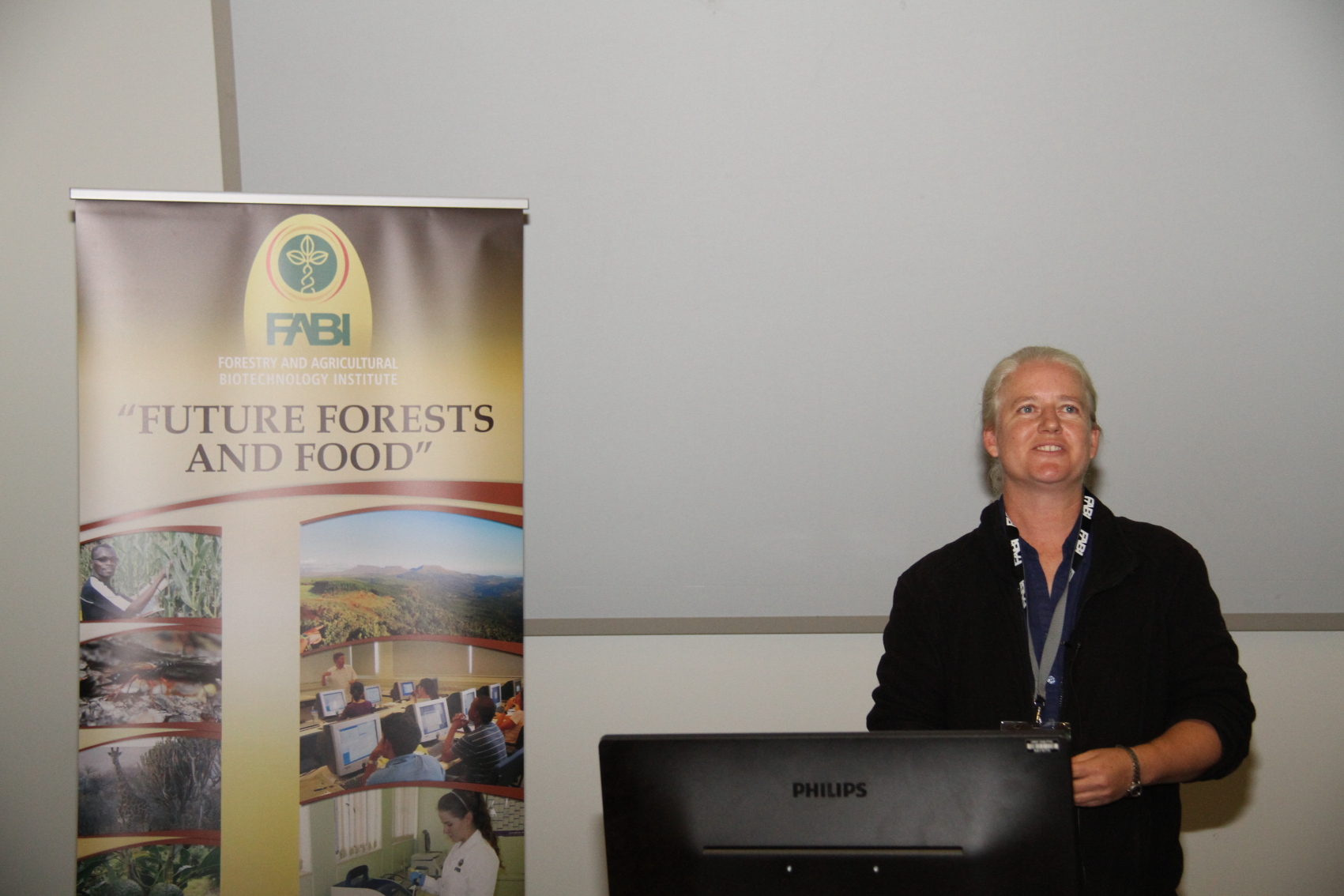 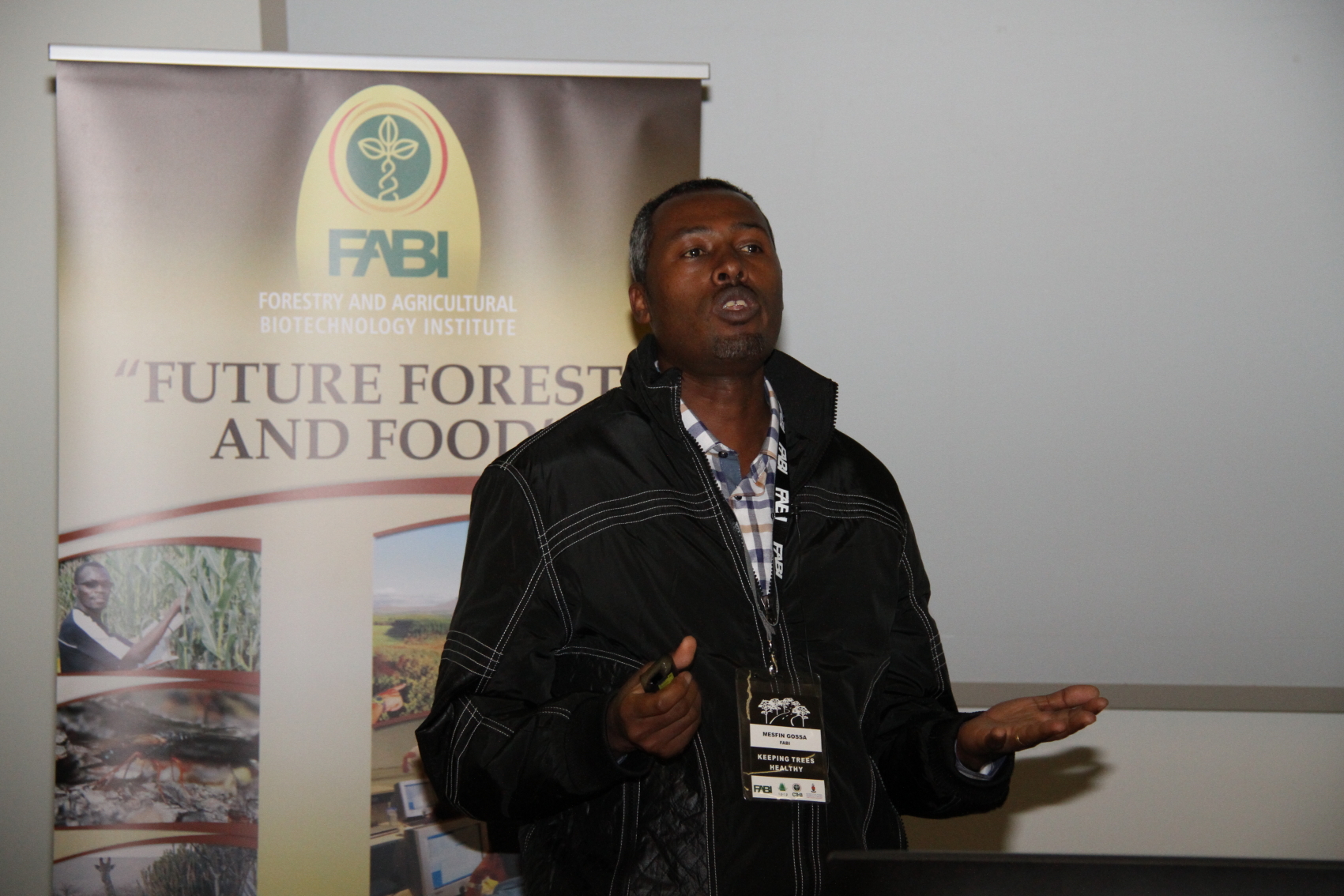 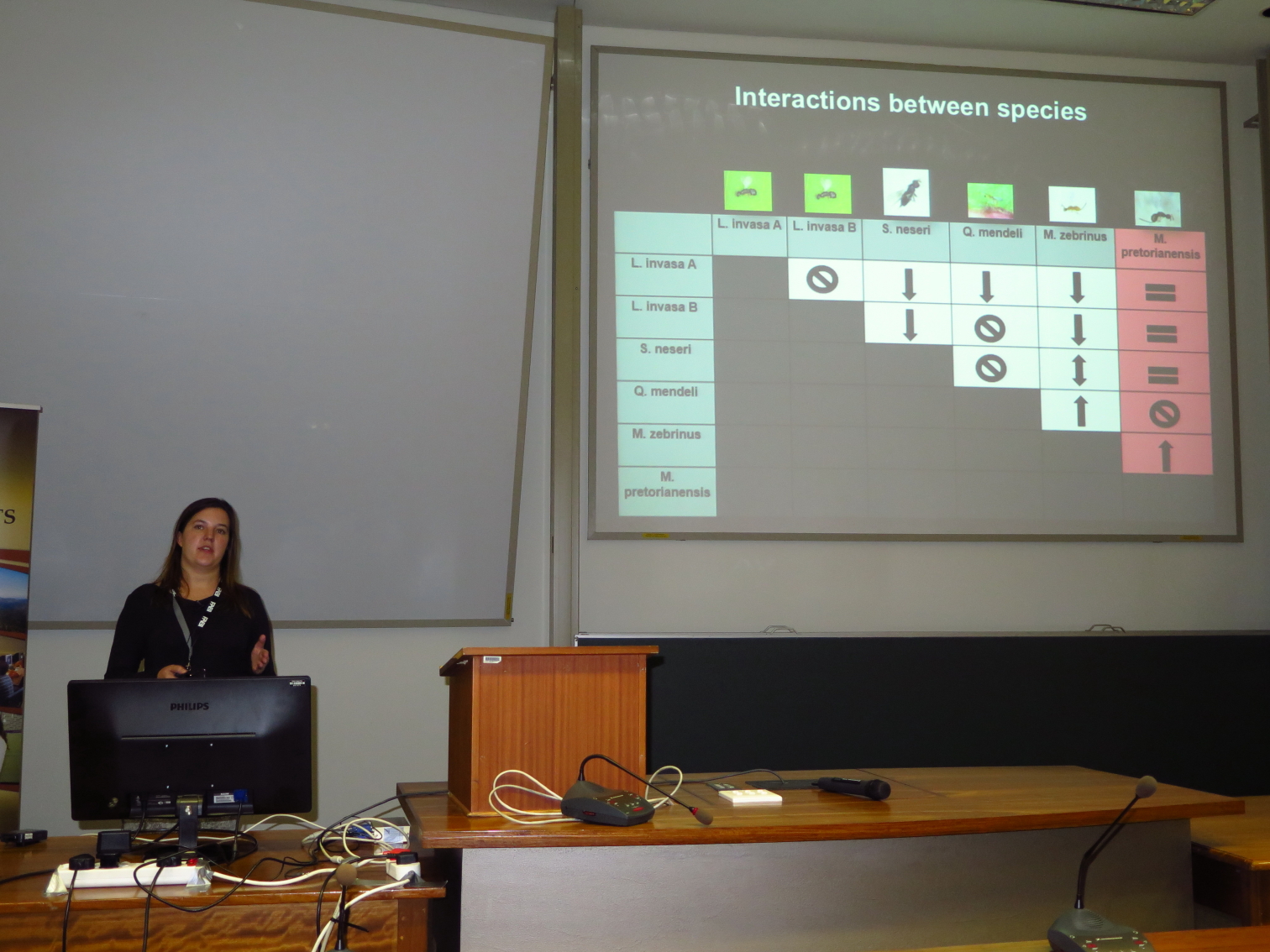 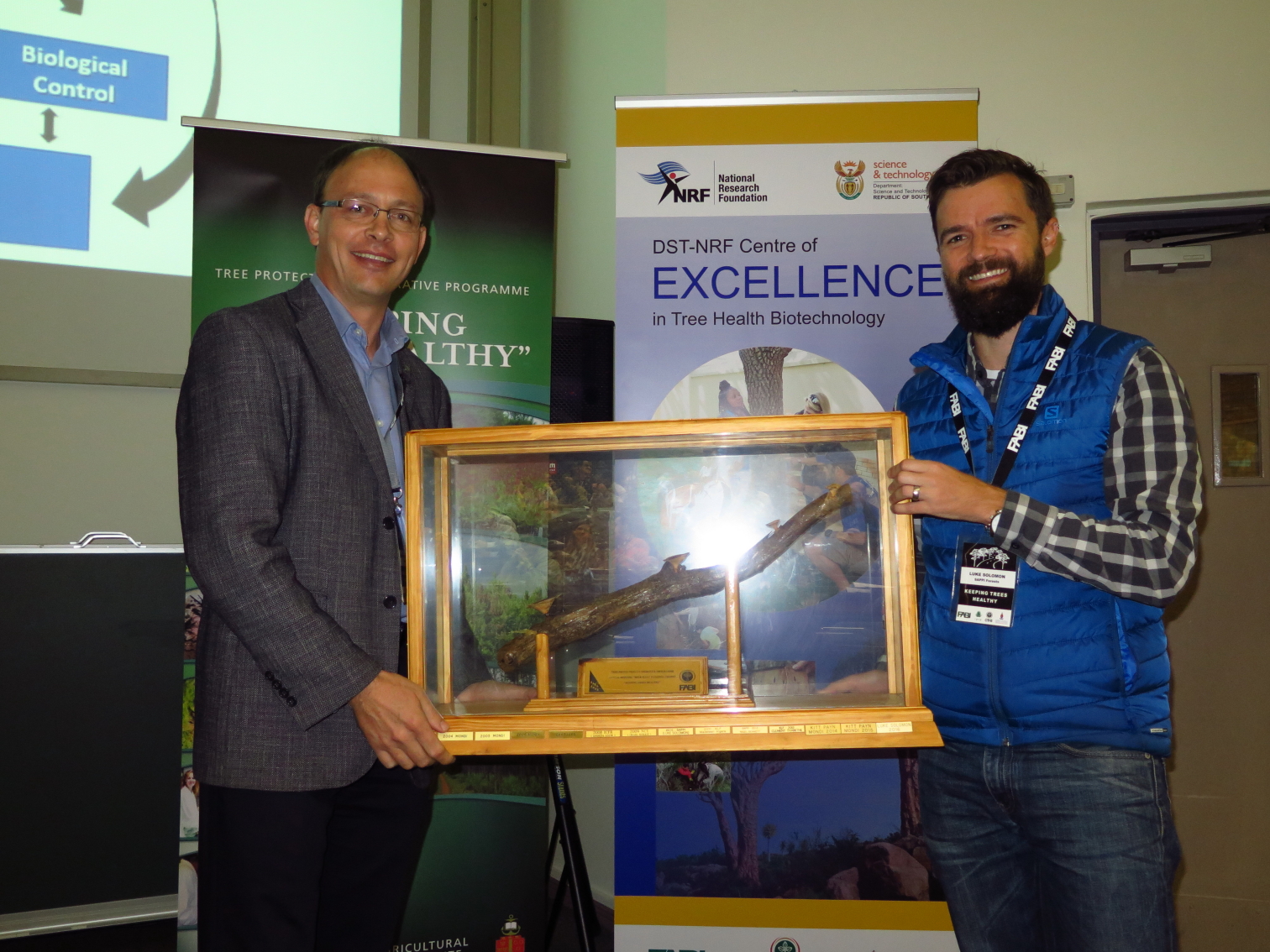 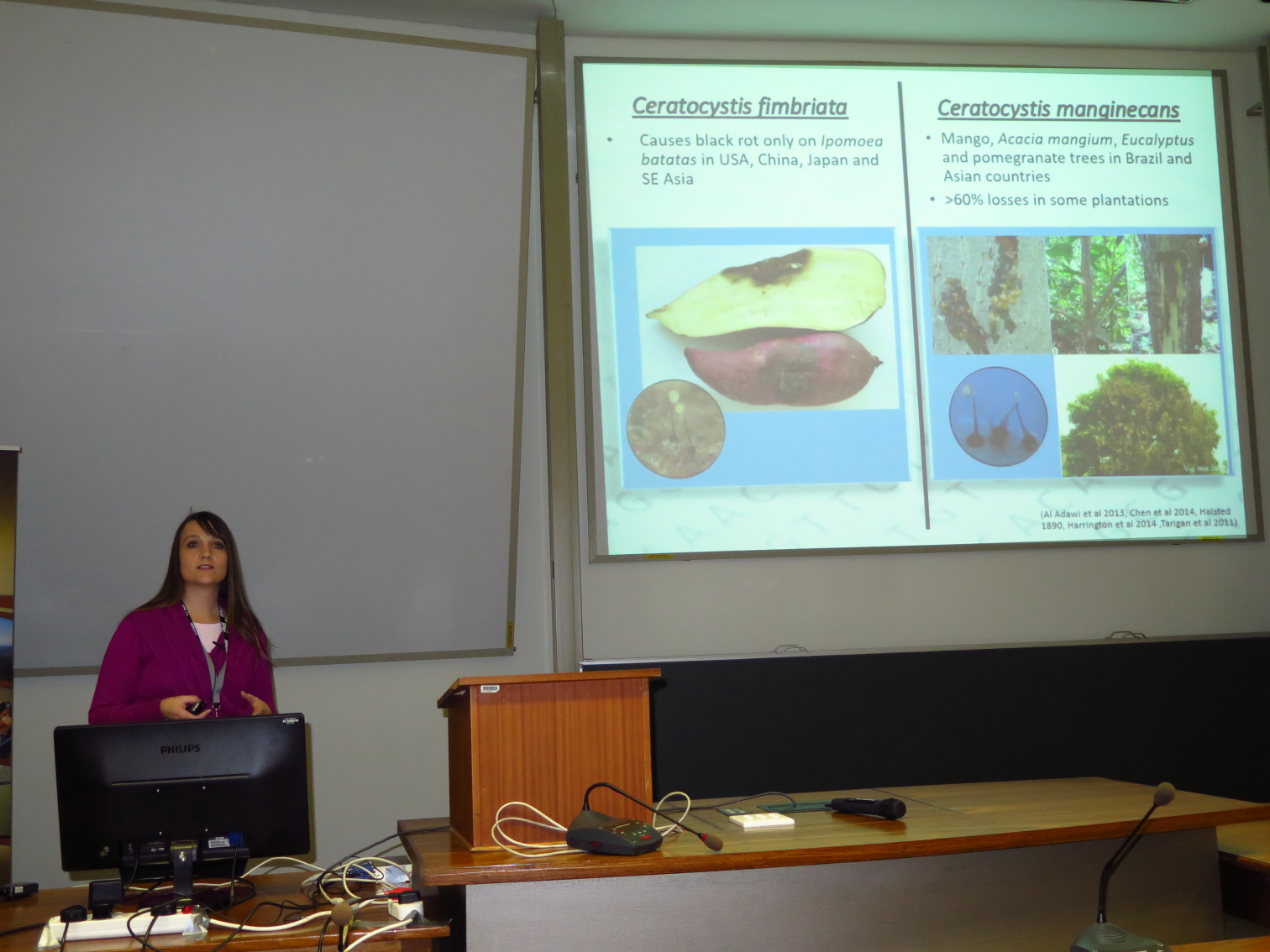 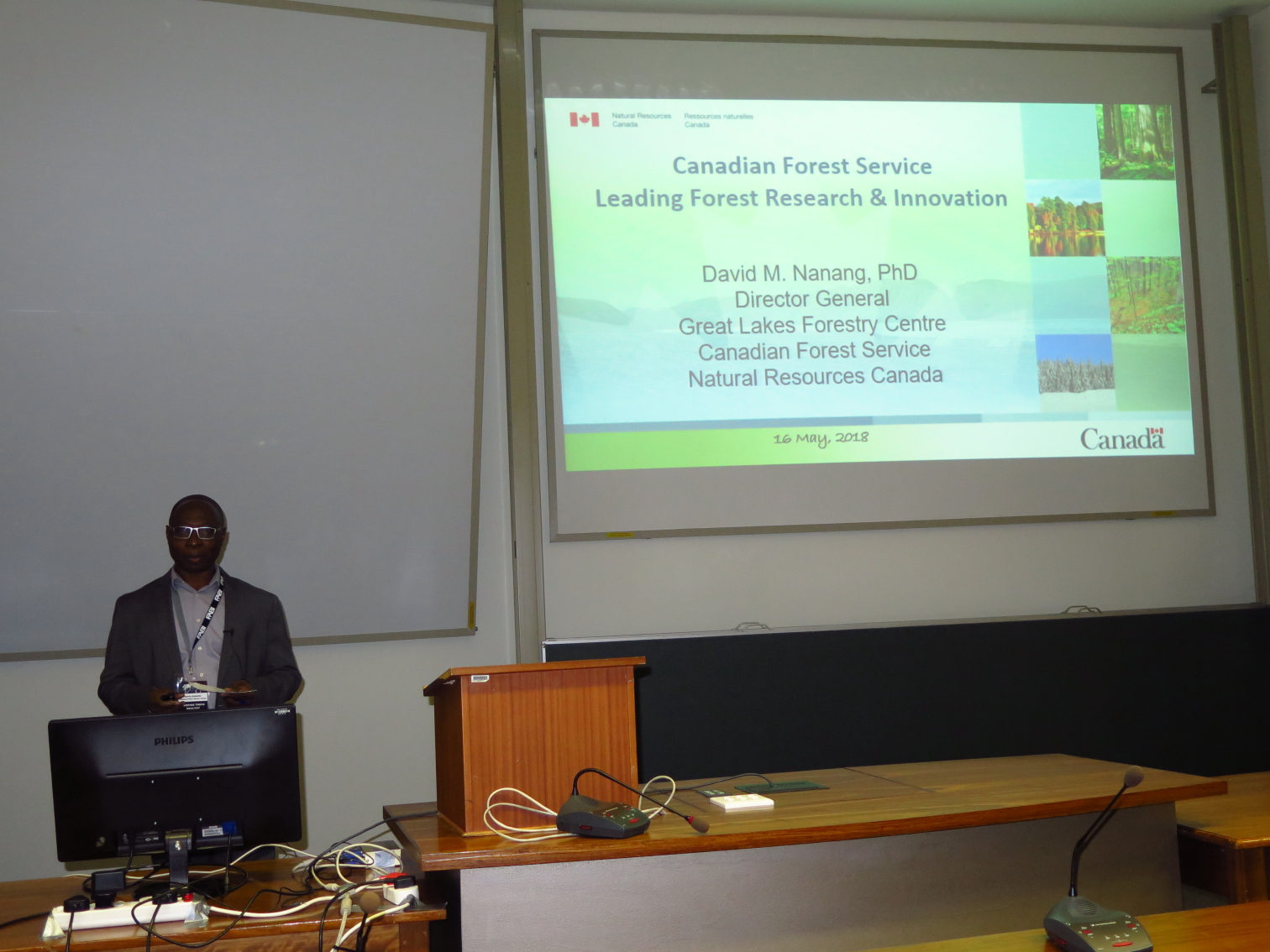 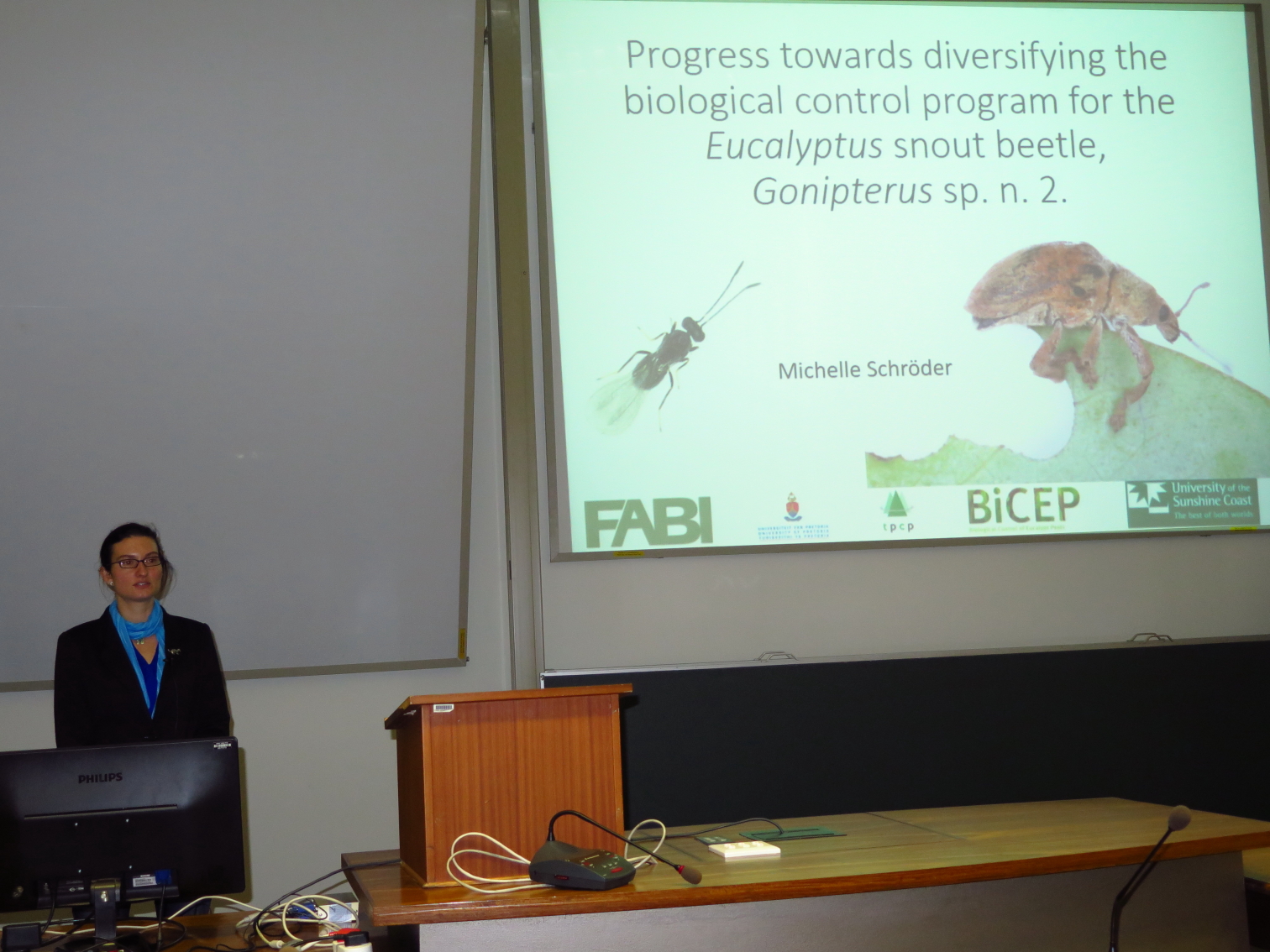 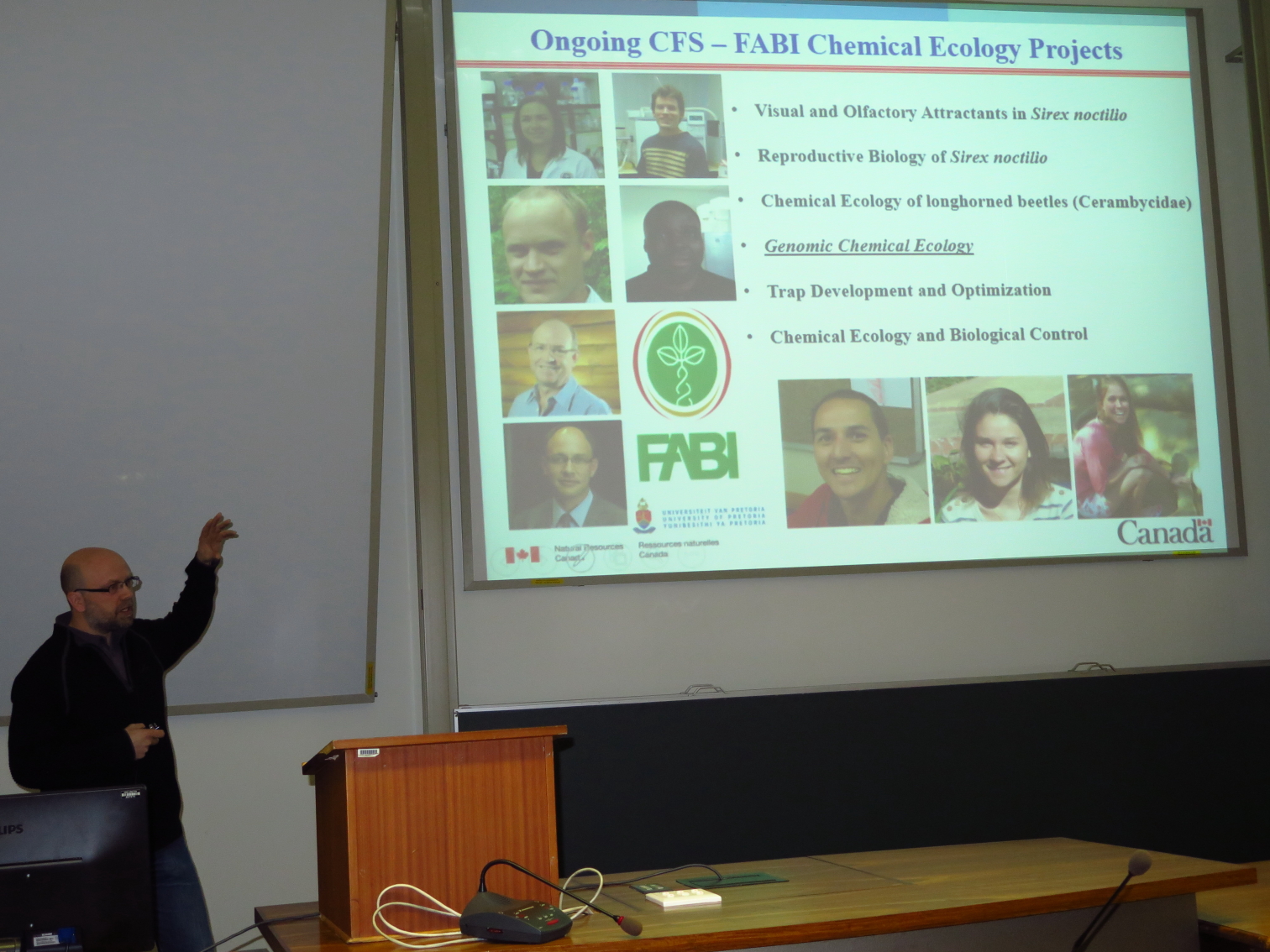 Presentations and discussions on the second and last day of the 29th Annual Meeting of the Tree Protection Co-operative Programme on 16 May followed up on the varying areas of  research that arise from the ongoing battle with insect pests and pathogens affecting tree health. Speakers highlighted the creativity, innovation and opportunities for collaborations that drive programmes such as the TPCP. The presentations are summarised below:

MSc student Caitlin Gevers opened the presentations by giving a snapshot of the four wasps that often emerge from  galls caused by the alien invasive gall wasp Leptocybe invasa, which is a serious pest of Eucalyptus. These are Selitrichodes neseri, Quadrastichus mendeli, Megastigmus zebrinus and M. pretorianensis. She found that S. neseri parasitises the two distinct  lineages of L. invasa, while Q. mendeli parasitises L.invasa lineage A. M. zebrinus, on the other hand parasitises both L.invasa and S.neseri, which could have adverse effect on biological control programmes. Caitlin suggested that M. pretorianensis could be an inquiline.

PhD student Arista Fourie also presented a five-minute speed talk focusing on her work on what makes South Africa species of Ceratocystis pathogenic . By crossing Ceratocystis fimbriata and C.manginecans under lab conditions, Arista found that the offspring differed in aggressiveness on the  two hosts – Acacia mangium and Ipomoea batatas. Her research will contribute to understanding the role of unique genes in causing disease on respective hosts.

Dr Marc Bouwer tracked developments in the use of applied chemical ecology in pest management at FABI. His representation highlighted five insect pest at the centre of research currently conducted in the Institute. These are Sirex noctilio, Gonipterus sp.2, Gonimbrasia cytherea, Eldana saccharina and Cacosceles newmannii.

Dr Almuth Hammerbacher spoke about the chemical compounds involved in the interaction between trees, insects and microbes. She showed how identifying the gene that encodes auxin synthesis in C. albifundus could contribute managing disease on A. mearnsii. The pathogen limits the tree’s chemical defences by inhibiting its production of tannins.

PhD student at Dartmouth University, Flora Krivak-Tetley compared populations of S. noctilio across four continents. Her presentation titled “International collaboration to compare Sirex population ecology across four continents: USA and Spain” focused on just two of the continents at the centre of her study – with the United States representing the invasive range and Spain representing Europe – the native range of S. noctilio.

Dr Trudy Paap discussed the benefits of planting sentinel plants in the early detection of plant pests and diseases. The discovery in 2017 of the polyphagous shot hole borer (PSHB) near the botanical gardens in Pietermaritzburg, KwaZulu-Natal, has highlighted the significant role played by botanical gardens in the early detection of pests and pathogens. This is because, contended Dr Paap, botanical gardens contain about 40% of known plant species in the world. Because they are in urban areas, they are often in proximity to points of entry such as airports and harbours, from where these threats can spread.

Prof Wilhelm de Beer reflected on recent developments in the spread of PSHB. The beetle has been reported in suburbs north, east and south of Johannesburg as well as Hartswater in the North West province and George and Knysna in the Western Cape. The beetle is a vector of a deadly fungus, Fusarium euwallaceae, which kills a wide range of indigenous and exotic tree species.

Dr Mesfin Gossa presented on the distribution of Eucalyptus pests and their biological control agents as part of the Eucalyptus Insect Pest Project in Africa (EIPPA), which aims to map the distribution of these pests and to analyse their genetic diversity. Rwanda tops his list with the most insect species such as L.invasa (as well as its parasitoid Selitrichodes kyceri), Glycaspis brimblecombeii, Gonipterus sp.2, Ophelimus maskelli reported in that country for the first time.

Dr Tanay Bose closed the presentations by bringing into focus the scope of Phytophthora species in natural forests and commercial plantations in SA. Of the 144 samples he collected, 132 tested positive for various Phytophthora species. He warned that Phytophthora was a threat to unique ecosystems in native fynbos, where it has also been found.

In a general discussion session to close the meeting, Prof Bernard Slippers who has taken over from Prof Mike Wingfield as Director of the TPCP summarised some of the key issues arising from a most successful meeting.  These included:

1. The very high standard of research on pests and diseases that was presented over the course of three days including the one day meeting of the DST-NRF Centre of Excellence in Tree Health Biotechnology (CTHB).

2. The importance of the extensive global collaboration enjoyed by the TPCP and the great benefits this brings to forest protection research not only in South Africa but globally. In this regard, he thanked the many overseas guests attending the meeting as well as the TPCP/CTHB stakeholders and the students of working in these programmes.

3. That new pests and diseases were appearing regularly in plantation forestry and capacity to deal with these problems would need to be expanded.

4. Recognition of the importance of research and how this has defined the many successes that South African forestry has had in dealing with pests and diseases over the 29 years of the TPCP.

In his concluding remarks, Prof Mike Wingfield made three points:

1. That the standard of the research presented at the meeting was world class.

2. That the South African forestry industry had lost species of pine and Eucalyptus due to pests and diseases. This has meant that the industry has continually had to work towards developing new species and this was at great cost.

3. He worried that plantation forestry companies in South Africa and globally could run out of acceptable species to plant.