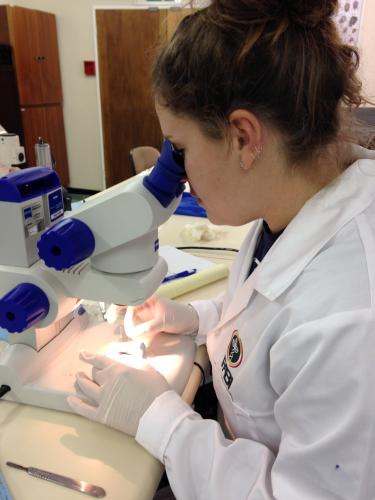 Prof Lori Eckhardt from the Faculty of the School of Forestry and Wildlife Science of the Auburn University, Alabama, and her MSc student Andrea Cole recently visited FABI to learn more about Sirex noctilio. Photo: Andrea Cole doing nematode isolations from Sirex wasps. A Focus on Insect Invasions

Insect invasions are growing in number and distribution rapidly. This month Sílvia Maússe Sitoe, an MSc student from Mozambique, received the examiner’s reports for her dissertation on the diseases of plantation Eucalyptus species in that country. 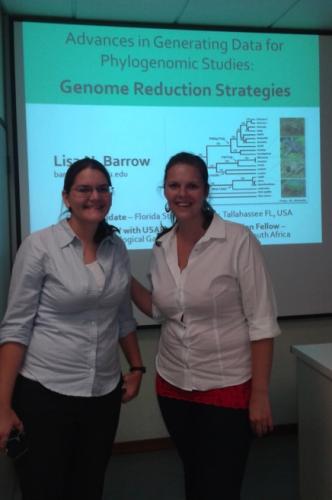 A Phylogenenomics Workshop was presented at FABI from 17 to 21 November 2014. 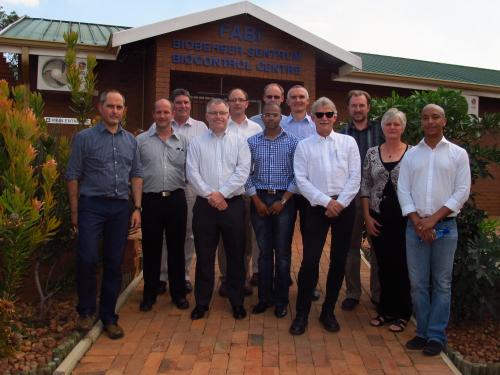 The forestry research team (including members of the Tree Protection Co-operative Programme - TPCP), the DST/NRF Centre of Excellence in Tree Health Biotechnology (CTHB) and the Forest Molecular Genetics Programme (FMG) enjoyed the pleasure of a visit by Sappi senior executives on Friday 21st November.

The Forest Molecular Genetics (FMG) Programme in FABI hosted members from the South African Forestry industry at their annual Research Meeting on Tuesday, 18 November, at the University of Pretoria. A fabulous Highveld thunderstorm provided the perfect prelude to the 17th Annual FABI year end gala dinner and awards ceremony. Student awards for 2014 Best MSc (based on final marks by external examiners): Marike Palmer and Desre Pinard. Special awards to people not a member of FABI FABI award recognizing contributions by a member of staff of the University of Pretoria (outside of FABI):Ms Jayvanti Pillay, Accountant of the Faculty of Natural and Agricultural Sciences. View more photos of the event in the gallery.

FABI had the pleasure of hosting Prof. 10th Anniversary of the Centre of Excellence Programme

The Department of Science and Technology/National Research Foundation Centre of Excellence in Tree Health Biotechnology (CTHB) housed at FABI was one of the first six CoE’s (selected via an open call and competitive process) to be selected for funding by the South African Government in 2014. 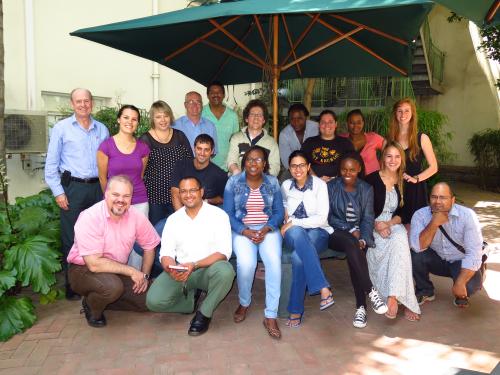 The Department of Science and Technology (DST)/ National Research Foundation (NRF) Centre of Excellence in Tree Health Biotechnology is based in FABI but funds researchers at various Universities and Institutions elsewhere in South Africa. 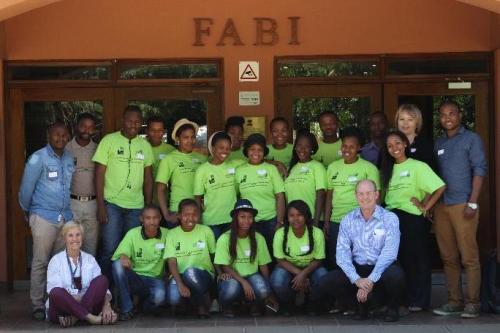 The annual lunch to celebrate the achievements of two of the outreach programmes of the DST/NRF Centre for Tree Health Biotechnology (CTHB) was held at FABI on Wednesday 5 November 2014 and attended by over seventy people.

International collaboration on the Sirex project

Sirex noctilio, also known as the European woodwasp, is one of the major pests on pine trees. Besides the interesting research and lab work Katrin also had the opportunity to learn about the Spanish kitchen, see the UNESCO heritage sight, the Roman wall in Lugo surrounding the old city centre, as well as the cathedral in Santiago de Compostela, the designation of the St. 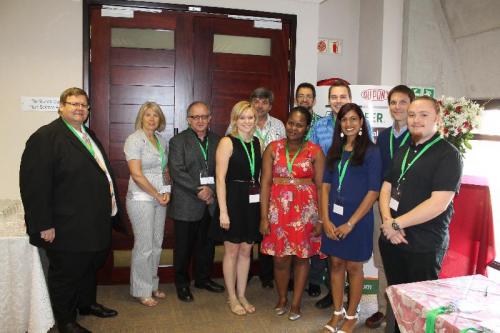 The first DuPont Plant Breeding Symposium to be held on African soil was recently hosted by the Genomics Research Institute (GRI) at the University of Pretoria. More photos of the symposium can be seen in the gallery.

Mike Wingfield, Director of FABI, had the special pleasure of hosting Prof.

FABIans publish an important review on the Sirex woodwasp

This week a review paper by three FABIans, Bernard Slippers, Brett Hurley and Mike Wingfield, was published online in the prestigious Annual Review of Entomology, the top ranked journal in entomology with a current impact factor of 13. A copy of the online early version of the review can be downloaded from the website of the Annual Review of Entomology by subscribers, or can be requested by email from Bernard Slippers or Brett Hurley. Slippers B, Hurley BP, Wingfield MJ.

Today, a large group of Honnours, Masters, and PhD students, and even three Postdoctoral fellows, of the TPCP and CTHB programmes joined in to replant 2700 Eucalyptus trees into bags at the FABI nursery on the experimental farm.

FABIans organize Crop Genomics symposium at UP on 6 November 2014

A symposium with the topic “Genomics of crops and pathogens for molecular breeding” will be hosted by the Genomics Research Institute at the University of Pretoria (UP) on 6 November 2014.

We congratulate Ritesh Mewalal, a PhD student in the FMG programme in FABI, whose essay was taken up in the current selection of NextGen VOICES of the journal Science. 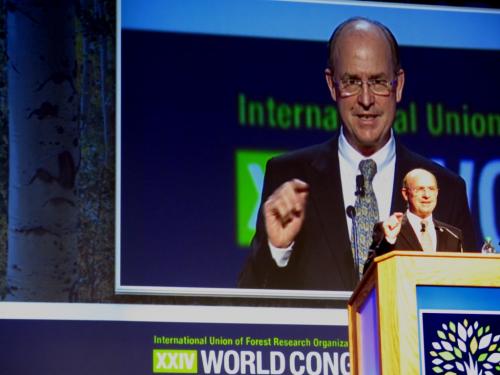 IUFRO World Congress 2014 closing ceremony and gala dinner by Dr Casper Crous And so we have come to the end of the 2014 IUFRO World Congress here in Salt Lake City, USA. To describe the congress in this text would probably amount to me being hyperbolic. This was one of the most academically intense yet gratifying congresses I have ever attended. As the delegates at the gala dinner are politely sipping away at a beverage of their choice, the words of Dr Cecil Konijnendijk spoken earlier resonates: "Foresters are in the business of creating happiness". So I return to South Africa with somewhat of a "brain fry", but also with a knowing that being part of FABI puts one in a position to address the current issues concerning our valuable forest resources. It was also decided that the next World Congress will be in Curitiba, Brazil, in 2019. See you back in South Africa. 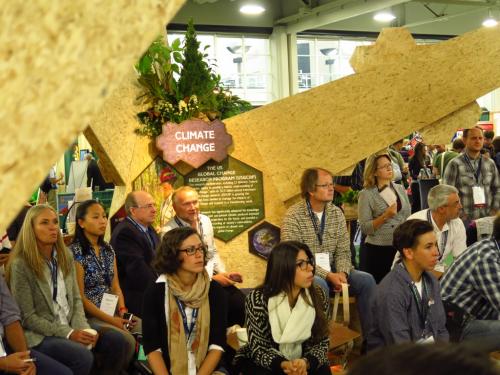 Healthy forests for a healthy future by Dr Casper Crous Since my rather wordy essays the past few days, I will synthesize Friday's events in a more concise fashion. In particular, the subject of biocontrol was nicely discussed. But before I divulge into the some interesting research talks, another FABI team member, Dr ShuaiFei Chen, currently extraordinary staff member, was one of nine recent PhD graduates who received an IUFRO Outstanding Doctoral Research Award (ODRA). Regarding the research discussions today, Brett Hurley highlighted the success of using Selitrichoides neseri as biocontrol for the pesky Leptocybe invasa - that massive problem in Eucalyptus plantations. Fortunately, as repeatedly emphasized this past week, issues like these are being prioritized globally, and the sharing of knowledge and more collaboration will help us find the right solution. Also, Dr Jason A. Lastly, a talk by Dr Toni Withers from New Zealand needs mention. I look forward to the closing ceremony and gala dinner where we can celebrate with the new IUFRO President, Professor Mike Wingfield. 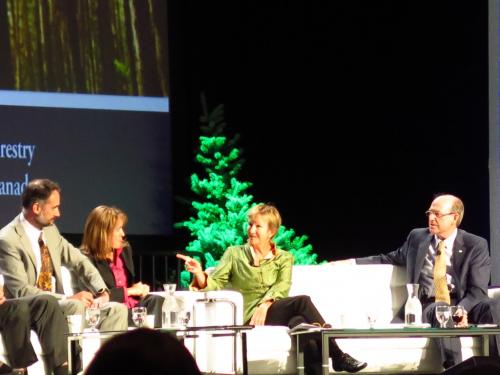 Thoughts on the essence of science - the discovery of knowledge by Dr Casper Crous After the field-visits yesterday, all delegates were once again roaming the vast hallways of the Salt Palace Convention Centre. The first plenary talk was given by Jack Dangermond, the founder and president of ESRI, the folks that brought you arcGIS et al. However, one of the neatest additions to the new software is real-time updates of data. Then, in a surprise visit, Prince Charles delivered a small speech via video from London, "disembodied but carbon neutral", as he put it. The second plenary was by prominent writer and biologist, David G. These two speakers then joined a rather informal panel discussion, which included IUFRO president-elect Professor Mike Wingfield, on the importance of reconnecting with nature and creatively going about acquiring knowledge. FABI was represented with Professor Bernard Slippers giving a thought-provoking talk on whether global quarantine ideals is a realistic approach for developing countries at present, especially since there are sneaky pathogenic endophytes. Also remember to visit the IUFRO Blog for more news or information. More soon. 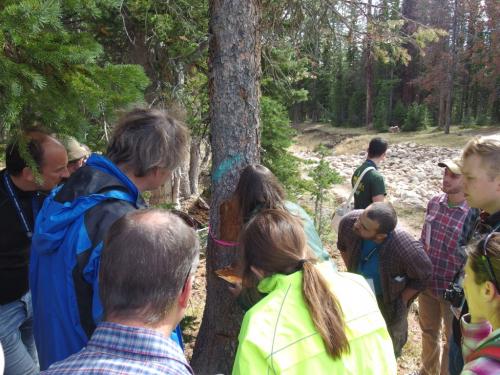 In-Congress field-trip: southern Utah Juniper-Pinyon Ecology by Dr Casper Crous On Wednesday, congress delegates were treated to an in-congress field trip across the beautifully diverse Utah state. Different FABI members did different tours. From a socio-economic perspective, the restoration of these woodlands is important for two reasons. 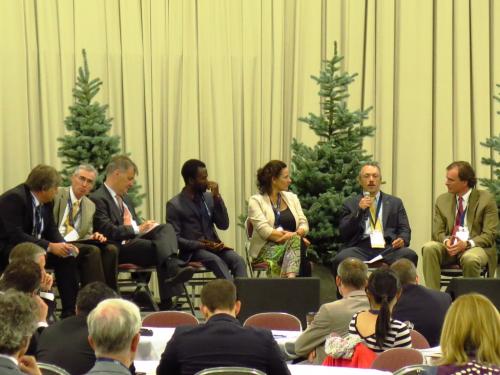 Controversial statements and lively debates - rebels with a cause by Dr Casper Crous After the honeymoon phase of the congress yesterday, it was back to business today, where key discussions and talks were often marked with some controversial statements and lively debates. The IUFRO President's discussion was first-up. Secondly, the idea of forest sustainability being a simple idea - e. Thirdly, the panelists agreed that for sustainable forest management to be realized globally, there needs to be a greater emphasis on educating people on the value of forests for providing income, e. And in fashion of controversy-today, Professor Mike Wingfield rightly pointed to the fact that to obtain more qualified foresters in South Africa, and perhaps in most African countries, is not that straight-forward. Talking about controversial, the keynote plenary, Professor David Newbery from Bern University in Switzerland, probably took the award. Well, there is at least one mind that will struggle to switch off tonight. 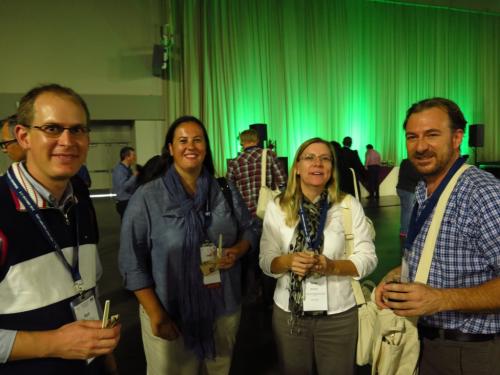 Opening Ceremony and Start of the Academic Programme by Dr Casper Crous Today was the start of the 'Big Show', as Mike put it earlier. However, before all the scurrying started, there could not have been a more sincere start to the day than a cultural song and dance representative of the indigenous peoples of the Great Basin. Overall, the opening ceremony of the 24th World Congress was telling that folks involved with IUFRO have a strong conservation ethic, which is undoubtedly the most vital part of ensuring long-term protection of forest products, especially in a time when the demand for such products is drastically increasing. Of course, after all that inspiration, Professor Jolanda Roux received an IUFRO Scientific Achievement Award (SAA). The keynote plenary today was given by Professor Andy Buchanan, from the University of Canterbury, New Zealand. Furthermore, a talk by Professor Mike Wingfield today was more food-for-thought. The current IUFRO president, Niels Koch, made a bold statement when he officially opened the 24th World Congress by saying it will be the best congress in the 122-year history of the organization. Greetings from Salt Lake City, Utah by Dr Casper Crous As many of you might know, the 24th World Congress of the International Union of Forest Research Organizations (IUFRO) kicks off tomorrow. The theme of the 24th IUFRO World Congress is 'Sustaining forests, sustaining people: the role of research'. This tree-planting event in the International Peace Gardens was symbolic of the root of IUFRO - bringing people together, from all over the world, to promote forest research globally. A second symbol of the tree-planting today was to highlight the role of urban forests, which, among other aspects, is often associated with a higher quality of living through cleaning air, filtering water, etc. And so, with a light dusting of snow on the towering Wasatch mountain range, and a fully-loaded congress schedule, there is plenty to be excited about this coming week. A good week to all.

In May this year symptoms of a previously unreported insect pest was detected on Eucalyptus in Midrand, Gauteng. While the symptoms appeared similar to those of some Ophelimus species, no gall formers emerged in captivity until recently. The species name must still be confirmed, but the symptoms and adults that have now emerged indicate that it might indeed be Ophelimus maskelli, which is a known pest of Eucalyptus in the Middle East, Europe, North Africa, Mauritius and New Zealand (native to Au

The Fruit Tree Biotechnology Programme (FTBP) in FABI held their annual industry meeting with the board of the Hans Merensky Foundation on 18 September.

Shoots of a Forest Pathology Tree 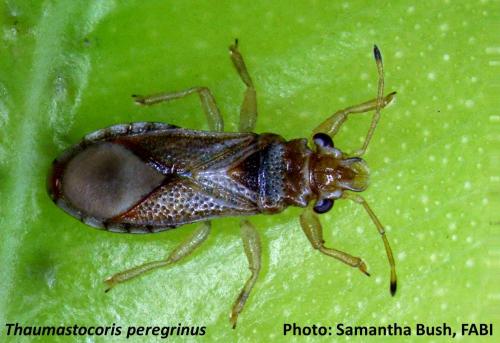 Celebrating one year in the Biocontrol efforts of the bronze bug

Currently there are many fungal genome sequencing projects at FABI. The workshop was attended by a dozen participants from different research groups in the Departments of Plant Science, Genetics, Microbiology and Plant Pathology, as well as a collaborator from the Department of Molecular and Cell Biology at the University of Cape Town. Reference Ridenour JB, Hirsch RL, Bluhm BH (2012) Identifying Genes in Fusarium verticillioides Through Forward and Reverse Genetics.